ASTRO’s Cha Eun Woo revealed how a crush got him interested in music, having an impact on his journey to becoming an idol.

The August 2 episode of SBS’s “Master in the House” followed the cast as they met with Park Na Rae and Jang Do Yeon to open up about themselves honestly and get advice on love.

While the group was talking about love, Cha Eun Woo reminisced about someone he had a crush on but never confessed his feelings to. Lee Seung Gi asked him, “What would you do if that person is watching this program right now and they feel like it’s them, so they message you and say, ‘Do you want to grab some coffee?'” To that, Cha Eun Woo replied, “I think it would make my heart beat faster and I’d be nervous, but more than that, I want to just keep it as a memory of the past now.” 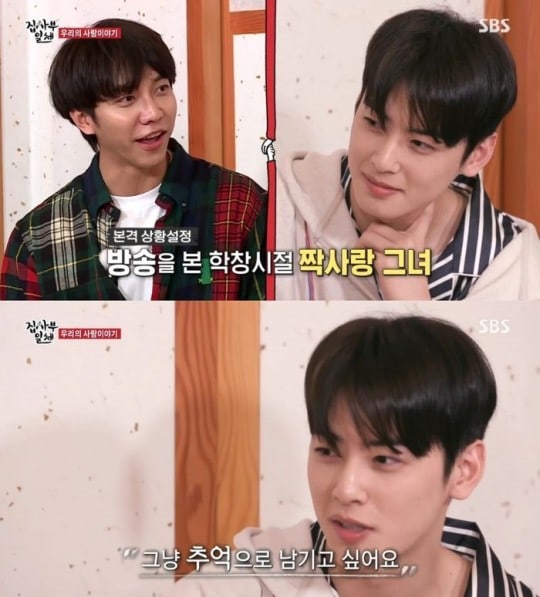 Cha Eun Woo elaborated that his crush got him more interested in music as he said, “When I was younger, I didn’t know much about singing or dancing. My crush was a huge fan of FTISLAND. She had all these stickers and posters of them. I wondered why she was so interested in them, so I watched their music videos a lot. That got me interested in music.” Lee Seung Gi connected the dots between Cha Eun Woo’s crush and his current career as an idol as he said, “She helped get into it [you career as an idol],” and even offered, “Do you want me to set up a meeting with you and Lee Hong Ki?”

ASTRO
Lee Seung Gi
FTISLAND
Cha Eun Woo
Master in the House
How does this article make you feel?