The August 2 episode of SBS’s “Master in the House” followed the cast as they met with Park Na Rae and Jang Do Yeon to talk about love and life.

Things got serious during a game of Truth or Dare when Lee Seung Gi opened up about a concern he’s been mulling over. He was first asked, “Do you feel so lonely that it drives you crazy?” and he replied, “It’s not to the point where I feel like I’m going crazy.” ASTRO’s Cha Eun Woo then asked, “Have you cried recently because you were upset?” Lee Seung Gi surprised everyone when he said, “No. Not recently. Actually, I haven’t in the past four years.”

Jang Do Yeon asked, “Are you the type of person who pushes emotions down when something sad happens?” He replied, “These days, I sometimes wonder if I’ve lost the ability to feel sadness. I think I immediately cut down any feeling of sadness if I feel it creeping up. Like I can’t afford to feel it.”

He continued on to say, “A question I get asked a lot is how I relieve stress. For a couple of years, I haven’t been able to come up with an answer to that question. Like I can’t see the clear path in front of me. I do get stressed, I know I experience a lot of stress, but I don’t know where it goes. I know it’s built up somewhere, but I don’t know just how much has built up. I’m the type that buries my stress in the ground, and I’ve never dug it back up to look over it again.” 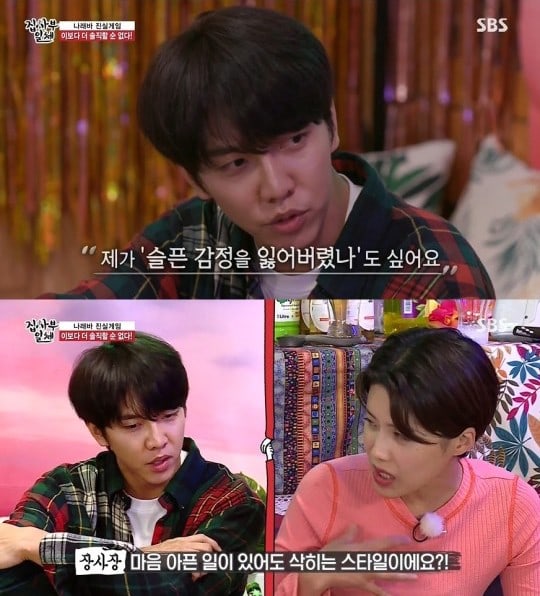 Jang Do Yeon empathized with him and said, “That can be dangerous because it might all explode one day, and you may not be able to control it.” She suggested keeping a diary, and Lee Seung Gi said he was warming up to the idea as he said, “I keep asking myself, instead of just burying my emotions and running, would things have been different if I kept a diary, which would allow me to bring those emotions back up and process them as I wrote?” Jang Do Yeon agreed and said, “I read somewhere that everyone has a limit to the emotions we can hold inside of us. So we have to empty out those emotions in order to let more in.”

Lee Seung Gi
Jang Do Yeon
Master in the House
How does this article make you feel?