Upcoming film “Diva” has released the first poster ahead of its premiere!

“Diva” is a mystery thriller about Lee Young (played by Shin Min Ah), nicknamed the “diva of the diving world.” After getting into an accident, madness steadily encroaches upon her as she struggles with her lost memories and trying to find her missing friend Soo Jin (played by Lee Yoo Young). Shin Min Ah, who has won the hearts of the public through roles in films such as “A Bittersweet Life,” “The Beast and the Beauty,” and “My Love, My Bride,” is expected to embark on something new through her role as Lee Young.

In the poster, Shin Min Ah faces the camera with a cold expression and one corner of her mouth turned slightly upwards. The text above her head reads, “You want my spot?” The question hints at the invisible competition and greed that exists between Lee Young and the missing diving athlete Soo Jin. In addition, the tagline next to the title that reads “The descent to the top” plays on the irony of the sport of diving, in which one must fall gracefully in order to become the best. 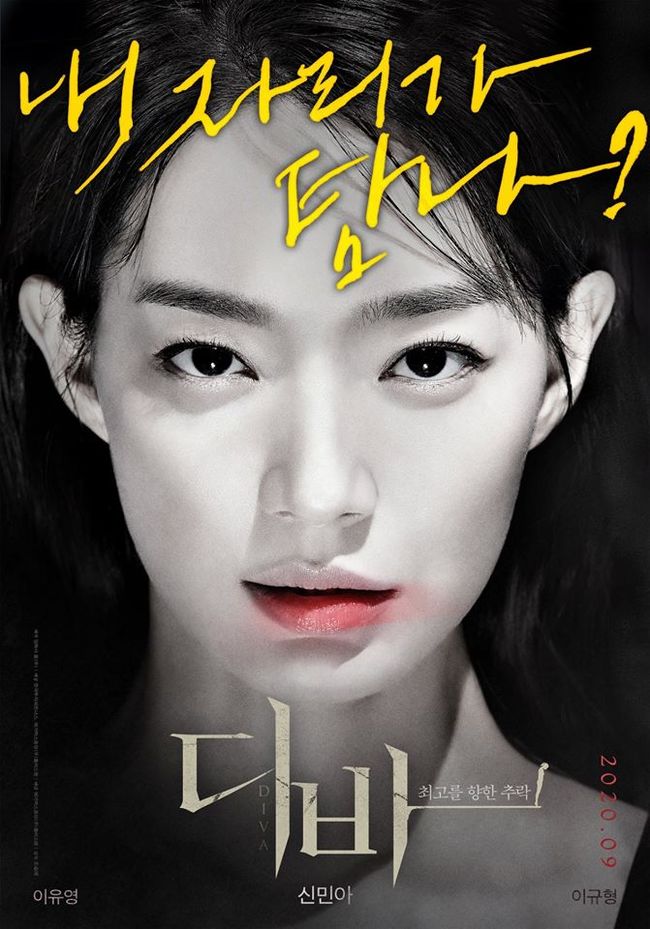 Talented actress Lee Yoo Young joins Shin Min Ah with her role as her best friend and fellow diving athlete Soo Jin. She made a splash after her debut, winning the Best New Actress award at the Blue Dragon Film Awards, Grand Bell Awards, Buil Film Awards, and more. Lee Yoo Young is expected to use her captivating acting skills to display the profound emotions that exist between friends and rivals.

Watching over both Lee Yoo Young and Shin Min Ah is Lee Kyu Hyung, who plays the role of their diving coach Kim Hyun Min. Having already shown off his ability to take on various roles through the dramas “Prison Playbook” and “Stranger,” the actor will once again make his mark as a master of the thriller genre.

“Diva” is slated to premiere in September 2020.

In the meantime, watch Shin Min Ah in “Oh My Venus” with English subtitles below: