Ji Hyun Woo and Kim So Eun recently sat down for an interview to talk about their teamwork in the upcoming drama “Lonely Enough to Love.”

“Lonely Enough to Love” is a romance drama about housemates in their 20s and 30s who don’t want anything serious and want to enjoy their freedom, but they also don’t want to be alone. Kim So Eun stars as Lee Na Eun, a freelance copy editor, who has said no to dating for the past four years, and Ji Hyun Woo co-stars as Cha Kang Woo, a handsome psychiatrist with a peculiar personality.

Ji Hyun Woo’s character Cha Kang Woo is described as someone who is interested in and curious about people but is passive about love. One day, Lee Na Eun appears in his life, and he starts to feel a spark of attraction for her, despite her own determination to not fall in love.

The actor shared, “I often think that Kim So Eun’s character Lee Na Eun is like me. Kim So Eun is also doing her best to faithfully portray her role. When I see that, I am able to immerse myself into Cha Kang Woo, so it’s great.” 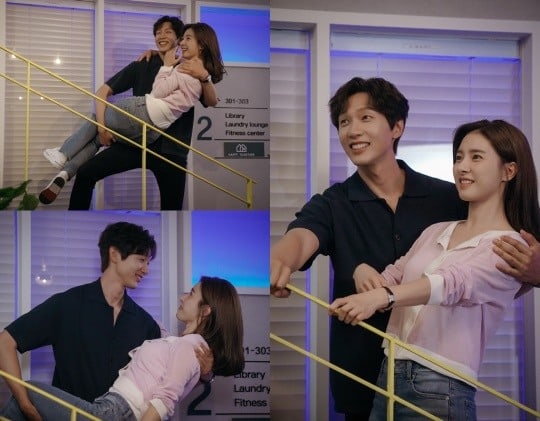 Kim So Eun’s character Lee Na Eun hasn’t been in love for four long years, and just when all hope for a relationship is lost, she becomes involved in a love triangle between Cha Kang Woo and Kang Hyun Jin (Park Gun Il), a friend of 18 years.

Kim So Eun shared her thoughts about Ji Hyun Woo, saying, “He has a delicate and tsundere [seemingly cold but actually warm-hearted] side. On the drama set, he helps me see what I missed and also takes care of me.”

When asked if she would choose between a “longtime guy friend” and a “real charmer,” she answered, “If I were Lee Na Eun, I would probably choose ‘real charmer’ Ji Hyun Woo. That’s because I think once you’re friends with someone who is very loyal and faithful, you remain friends forever. No matter how much time passes, it will be difficult to think of a guy friend as something more.”

Ji Hyun woo
Kim So Eun
Lonely Enough to Love
How does this article make you feel?