Watch: Kang Daniel Shares Funny Story Of How He Started Dancing, His Difficult Journey To Becoming A Singer, And More

Kang Daniel recently made an appearance on “Yoo Hee Yeol’s Sketchbook” where he talked about his new mini album, journey thus far, and more!

On the August 7 broadcast of KBS 2TV’s “Yoo Hee Yeol’s Sketchbook,” Kang Daniel appeared as a guest to promote his mini album “MAGENTA” and title track “Who U Are.”

For his first performance, Kang Daniel showcased his charming voice with “Interview,” a b-side track from his first mini album “CYAN.”

Regarding his name, Kang Daniel explained that he was actually born as Kang Eui Geon. He shared, “It’s the name my father gave me. However, I’m from Busan and the people there have trouble pronouncing ‘Eui.’ There were times I was confused about whether they were calling me or not. Although it seems small, that stress kept building up and it was bugging me so I ended up changing my name.” 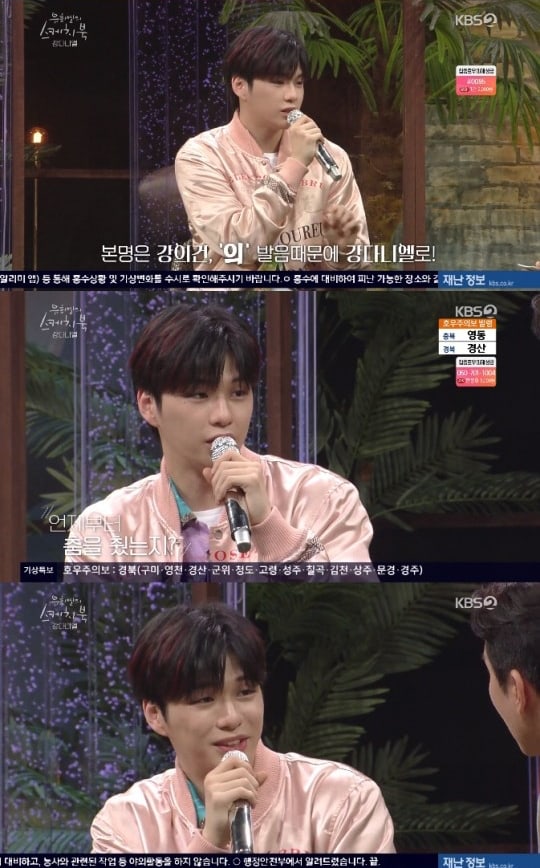 He shared the funny story as he said, “I wasn’t initially planning on joining that club. In seventh grade, I was in the magician club and I wanted to join the reading club in eighth grade. My teacher told us to write our names down to sign ourselves up but I fell asleep. All the other clubs were at maximum capacity and there happened to be a b-boying club. I was really introverted but I had no choice but to sign up and join. At first, it was really boring, but after a couple times I began to think, ‘Something fun has found its way into my life’ and began to work really hard.”

At Yoo Hee Yeol’s request, he also showed off some basic b-boying moves that he first learned while in his middle school club.

Due to difficult family circumstances, Kang Daniel found himself having to drop out of his arts high school after one year and instead took Korea’s equivalent of the General Educational Development (GED) test. He commented, “Although ballet was fun, my tuition was too expensive.”

After turning 20 years old by Korean reckoning, Kang Daniel moved to Seoul to become a singer and began living in a goshiwon, a type of housing arrangement typically leased by students studying for an important exam.

Kang Daniel impressed Yoo Hee Yeol with his positivity as he shared, “The older guys I spent a lot of time with back then hated when we lived in the goshiwon. However, I had fun. Each month we paid 170,000 won (approximately $142). When I lay down, I could reach all the walls, but I liked that. I thought it was cozy.”

Despite his positive outlook, the singer also explained that he had his fair share of hardships. He explained, “By nature, this career involves extravagant performances but I felt like it was so cold where I was. That’s why in my early twenties I meant to enlist right away but they had too many enlistments so I was pushed back. While planning on getting certifications to try and get employed, I went to my last audition,” which is how he made his fateful appearance on “Produce 101 Season 2.”

After finding tons of success with that last audition, Kang Daniel shared, “I went to Busan right away and went on a date with my mom. I bought her lots of clothes and had fun. My mom is very happy.” He jokingly added with a laugh, “I did get shivers seeing how much she spent though.”

When asked about his dream, Kang Daniel responded, “I think this was automatically decided when I started to become a singer. Since I’ve come to adore the stage, I hope to become synonymous with the word ‘performance.'”

Kang Daniel also sang a bit of Kim Johan’s “I Want To Fall In Love,” which he shared he heard during his time at the goshiwon. He explained that he happened to overhear Jung Seung Hwan’s cover of it on “K-pop Star” and that it gave him lots of strength.

Lastly, Kang Daniel showcased an energetic performance of his latest title track “Who U Are”!

This week’s broadcast of “Yoo Hee Yeol’s Sketchbook” will be up on Viki soon! Catch last week’s episode below:

Yoo Hee Yeol's Sketchbook
Kang Daniel
How does this article make you feel?