Watch: Lee Joon Gi Is A Ball Of Energy On The Set Of “Flower Of Evil”

tvN unveiled a new making-of video that shows Lee Joon Gi is the complete opposite of his mysterious and dark character in “Flower of Evil”!

The video starts off with the actor rehearsing the scene where he and Moon Chae Won cuddle on the couch. The actress isn’t there, so he caresses the air in front of him, and the caption jokes, “Only good people can see Cha Ji Won (Moon Chae Won’s chracter).”

Lee Joon Gi’s silliness doesn’t end there. He continuously jokes around when he sees the making-of camera, and he even does a cute “hula dance” with a playful smile.

Finally, Moon Chae Won appears, and they start filming. However, the sofa is too narrow, and she jokes, “I can’t lie down!” and Lee Joon Gi bursts into laughter. Next, the two prepare to film a scene where his head is in her lap. Moon Chae Won admires how much hair he has and comments, “This isn’t fake hair, right?” Laughing, Lee Joon Gi says, “Of course not. I wouldn’t wear a wig to the set.” Then he boasts, “I probably will never have to worry about losing hair.” 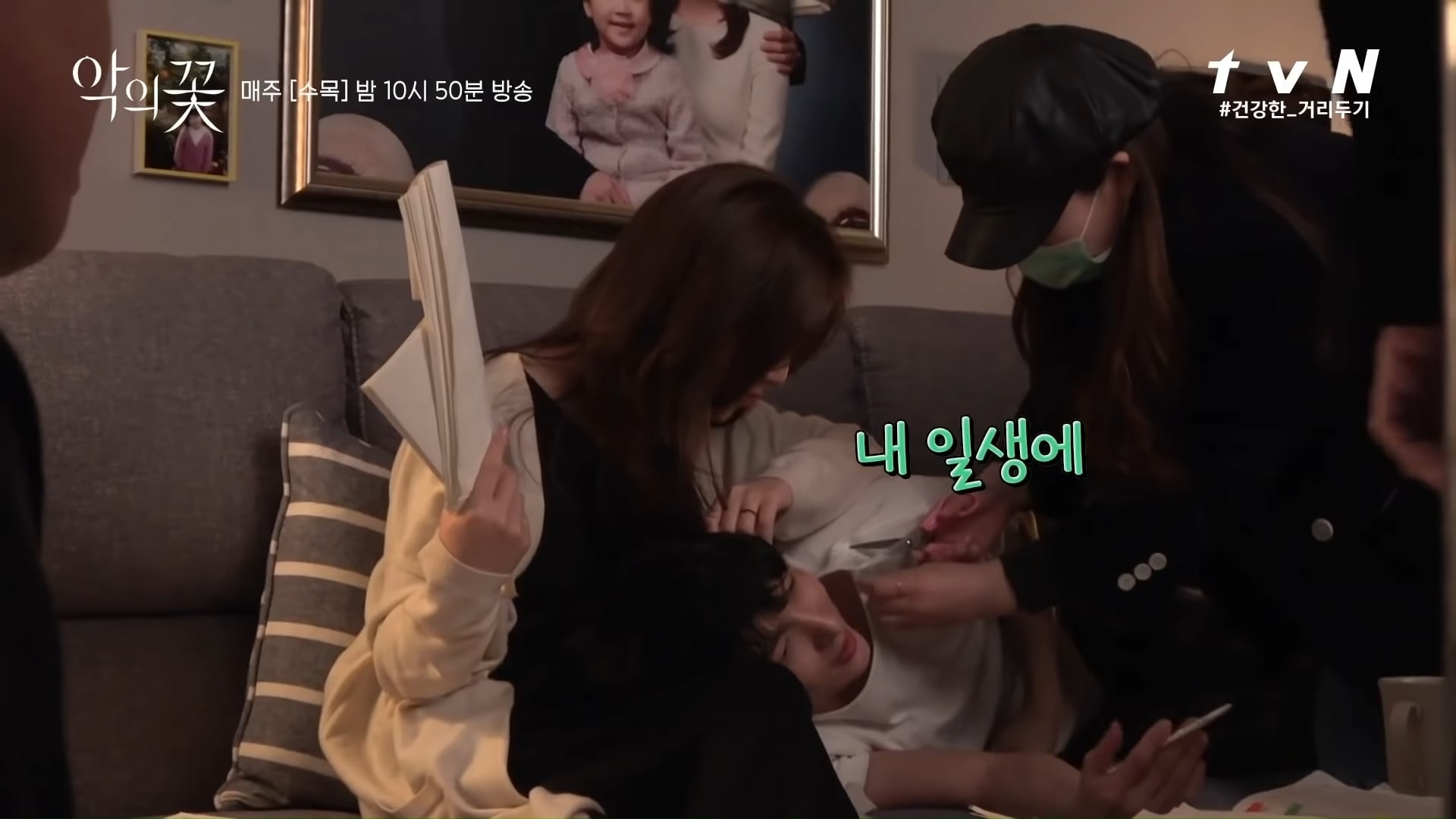 The two actors lie down on the sofa and wait for cameras to start rolling. Moon Chae Won says her line that warns Lee Joon Gi he can’t go around revealing what she told him. In the drama, his character sweetly promises to seal his lips, but in this clip, he jokes, “Nope, I’m going to tell everyone.”

Filming officially starts, and the two lie down. However, the director calls “cut” right away because someone’s stomach is showing. Startled, Moon Chae Won demands, “My stomach?!” and Lee Joon Gi replies, “No, mine,” making everyone laugh. Lee Joon Gi adds, “Your back is to the camera, [so of course your stomach won’t show],” and she comments, “That scared me.” 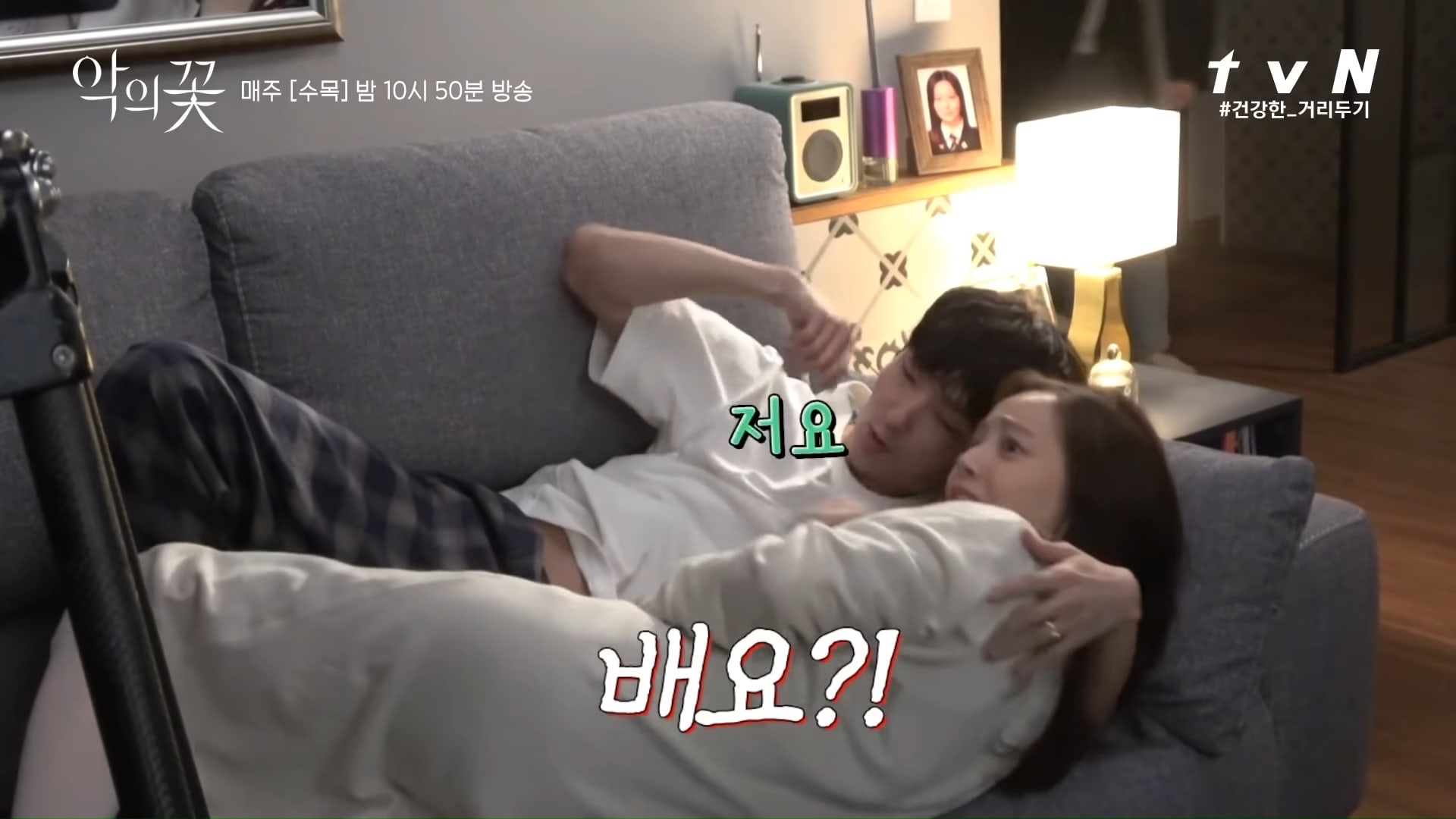 Next, the two actors film the scene where he has to hide from her outside the apartment building. Lee Joon Gi waves at the camera as he’s hanging by a wire. In the drama, Moon Chae Won doesn’t discover him, but in this clip, she pretends to find him, and with wide eyes, she demands, “What are you doing there?” Lee Joon Gi plays along and pretends to jump off.

During filming, Lee Joon Gi loses his grip and almost falls. Thankfully, the wire catches him, and he manages to grab onto the railing with his quick reflexes. He cries out, “Oh, gosh!” and then he laughs in relief. When the staff member asks if he’s scared, he assures, “It’s fine. This is nothing. I practically flew back in the day.” 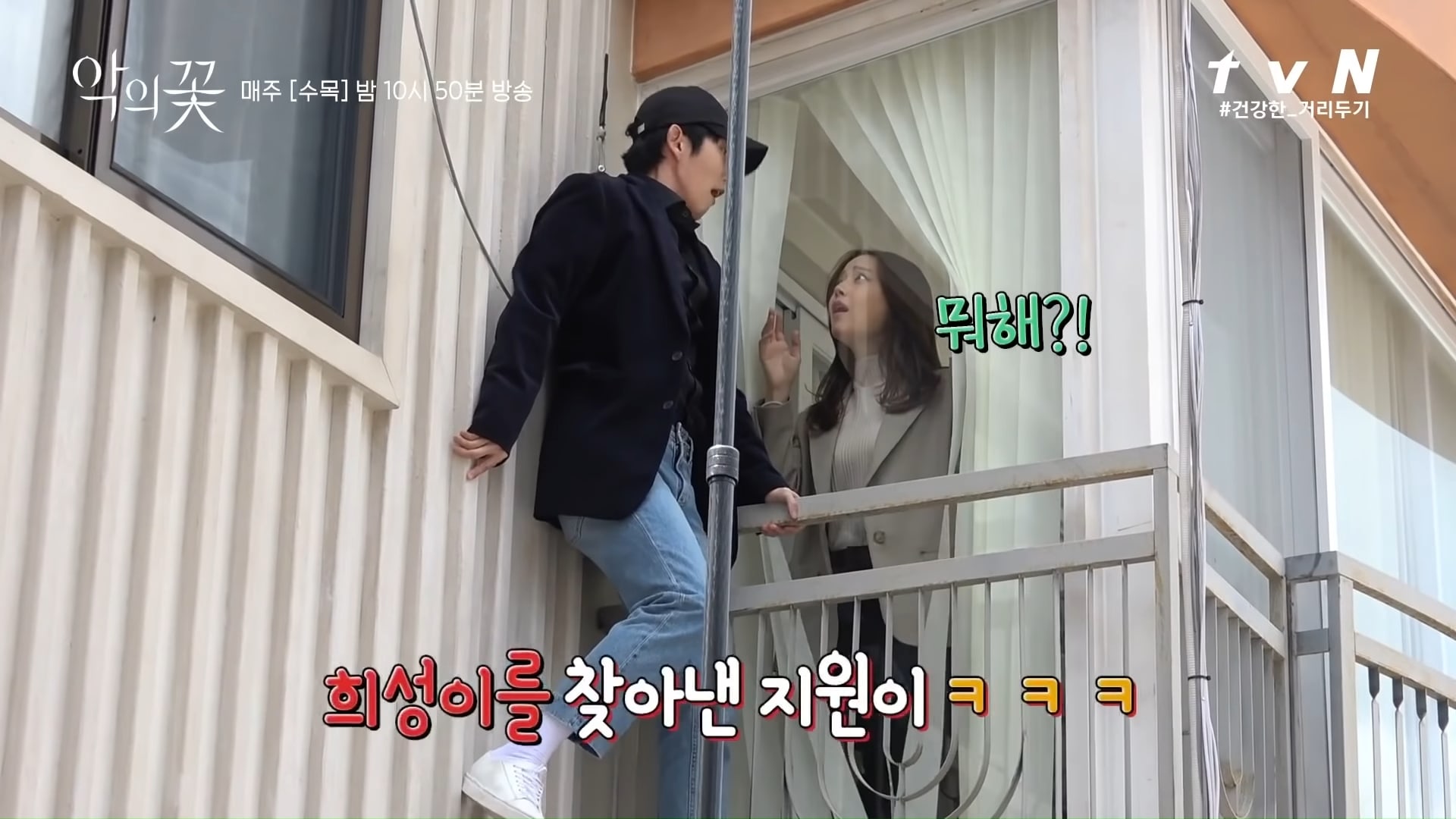