On the August 11 broadcast of MBC Every1’s “Video Star,” Hyerim and Shin Min Chul talked about their relationship, thoughts on starting a family, and more.

The filming for this broadcast took place 10 days before the couple’s wedding, and Hyerim handed out invitations to the hosts and guests.

Hyerim revealed that she has plans to become a mother in the future. “I want to have a child within the next two to three years,” she said. “I want to have one soon.” The hosts remarked that Hyerim, who is 29 years old by Korean reckoning, is at a good age to start a family.

Hyerim also mentioned that she can’t remember the last time she kissed Shin Min Chul. She explained, “I’m so busy with school, TV shows, and preparing for marriage that I don’t really care to show physical affection for him.”

She continued, “I give him a lot of quick pecks, but I don’t kiss him.” The other guests empathized, saying that there is a right time and place for kisses.

Shin Min Chul appeared later on the show through a video, where he sent Hyerim a sweet message. In the video, he said, “We only have 10 days left until our wedding. I’m very nervous and excited, and the memories from the 7 years we were together are all coming back to me. Let’s have a happy life 70 years — or even 700 years — into the future.” 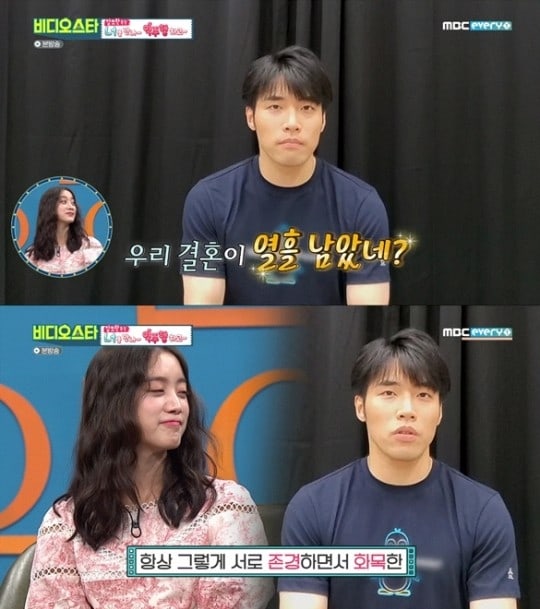 He continued, “Apart from you being my lover, my girlfriend, and my wife, I think of you as someone I can really respect whenever I see you studying or working hard. Don’t you want to see me now that I’ve talked to you?”

Shin Min Chul then made a surprise appearance on set, and it was revealed that he’d actually been waiting behind the scenes long before the filming began.

He then expressed his feelings ahead of the couple’s wedding. He said, “Even though we’ve dated for seven years, it feels like a new start now that we’re getting married, and I’m starting to feel excitement again.”

Hyerim teared up as she commented on Shin Min Chul’s video message. “I felt great when my husband told me that he admires me,” she said.

When the hosts asked Shin Min Chul what he thought about Hyerim’s plans to have a child within the next few years, Shin Min Chul said, “Hyerim just signed a contract with her new agency last March, so I think it would be good for her to work in the industry a bit more.”

He added, “Before that, we agreed that we’d want to have a child soon, but lately, my thoughts on that have changed.”

Shin Min Chul also talked about how his personality has changed as well after meeting Hyerim. He said, “Hyerim doesn’t know this, but I don’t act the way I do around her with others.”

Shin Min Chul then surprised Hyerim once again with a sweet cover of Lee Seung Gi‘s song “Will You Marry Me?” He ended the song, saying, “I love you, Woo Hyerim!” Shin Min Chul, who is a professional taekwondo athelete, also showed off his taekwondo skills for Hyerim and the guests.

Watch his full performance below!

Watch Hyerim in the film “The First Shot” here!

Shin Min Chul
Hyerim
Video Star
How does this article make you feel?