Yoon Eun Hye’s home had a total transformation on the tvN reality show “The House Detox”!

The show features hosts Shin Ae Ra, Park Na Rae, and Yoon Kyun Sang helping people organize their homes. The producer of the show previously revealed that Yoon Eun Hye had contacted them to ask for their help.

On the August 10 episode, Yoon Eun Hye invited the team into her home, sharing that she lives with her manager of 10 years and a close friend who’s a vocal trainer.

Yoon Eun Hye explained how that they’d started living together. “I was lonely when I was living on my own, so I invited people over a lot and we began living together,” she said. She shared that living with others has made her more extroverted and also happier.

She went on to say with a laugh, “However, it’s been eight years since I moved here, but now there are so many unfamiliar belongings in this place.” 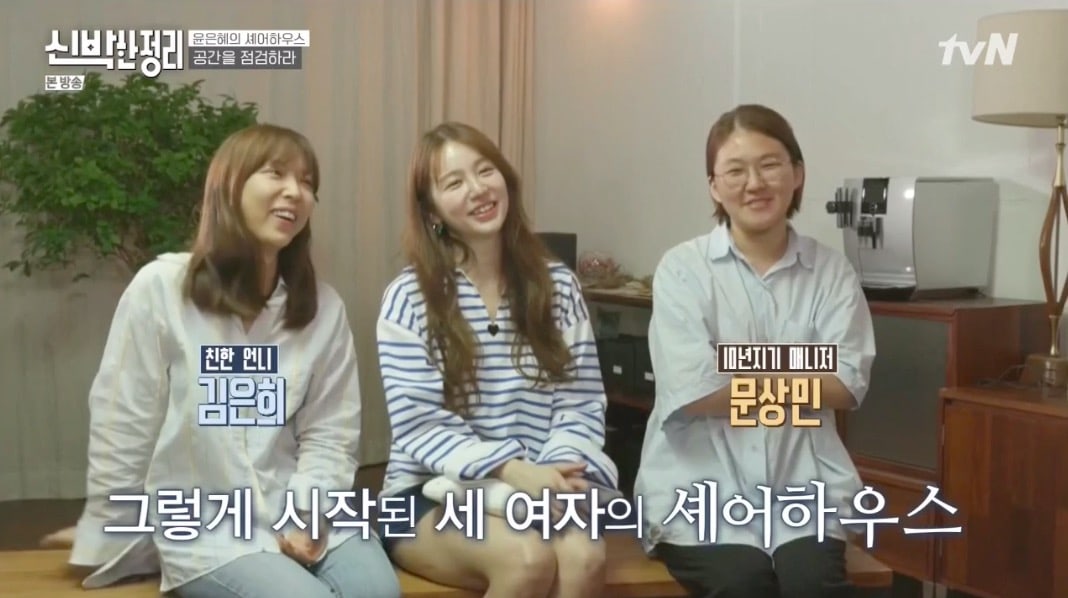 While their living room looked spotless so that they could have people over, she showed the team how one entire wall was covered in large white wardrobes for storage. 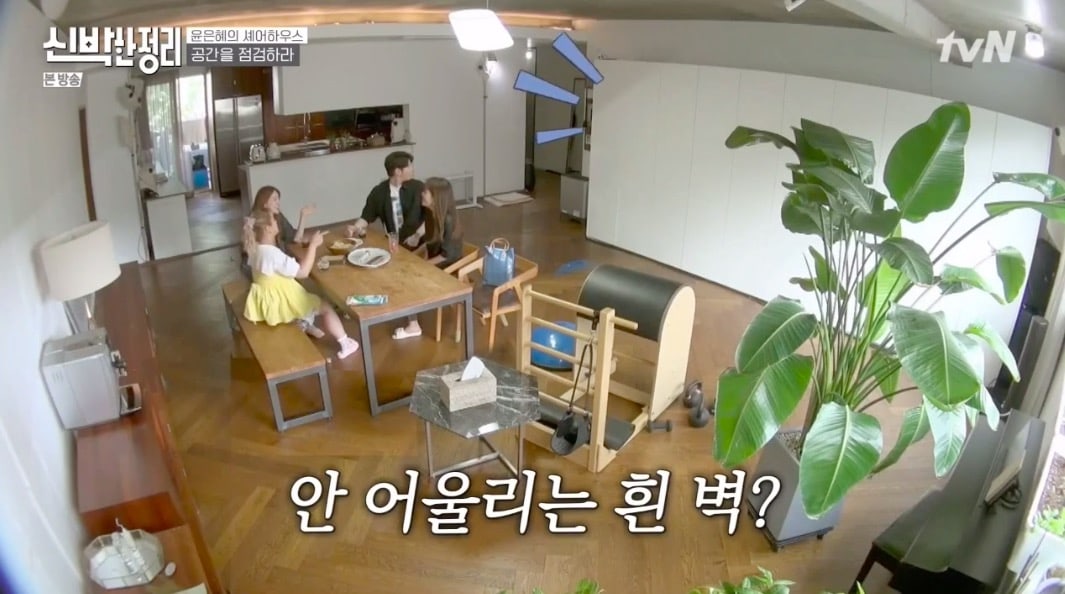 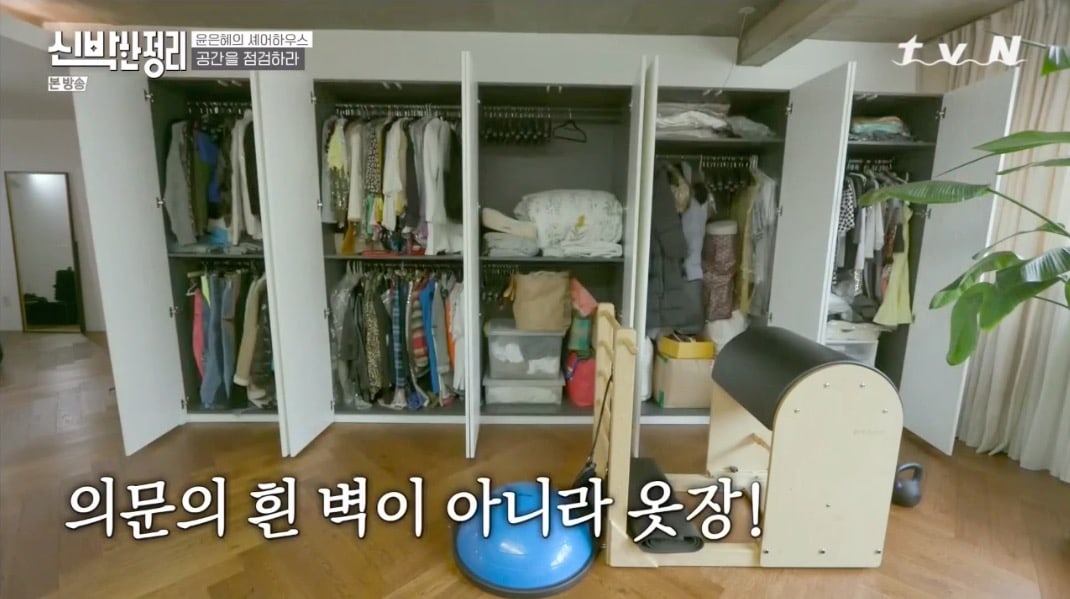 The problem areas in their home included this living room closet packed with their belongings, hallway dressers where they kept shared items like sports equipment and socks, their many storage areas for shoes, a room for clothes, and more.

Yoon Eun Hye explained that she’d already got a huge amount of her clothes ready to donate. “Thank you for even taking all this out already,” said Shin Ae Ra. 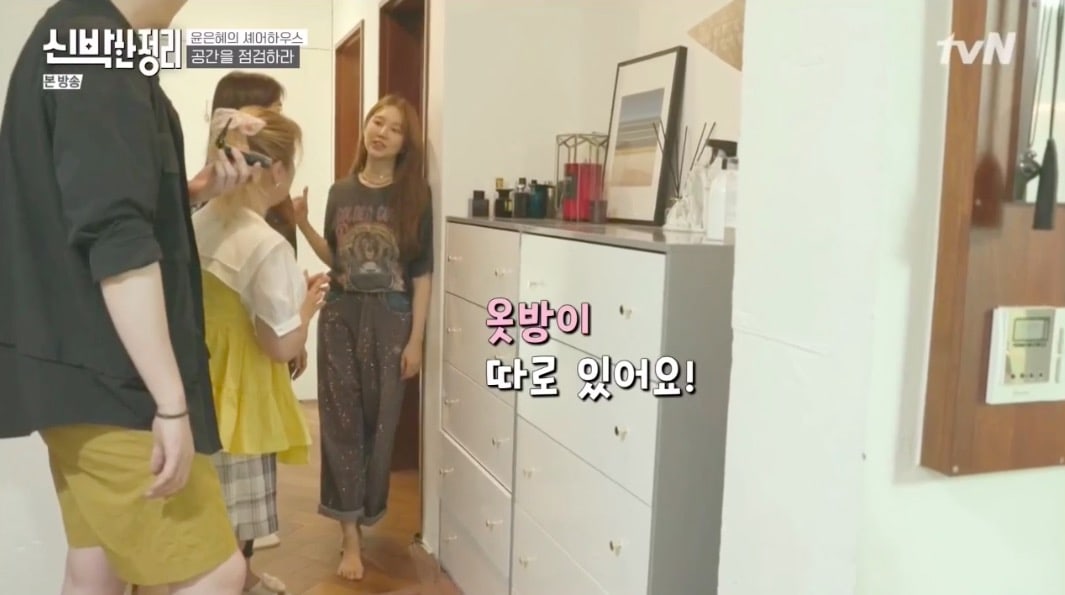 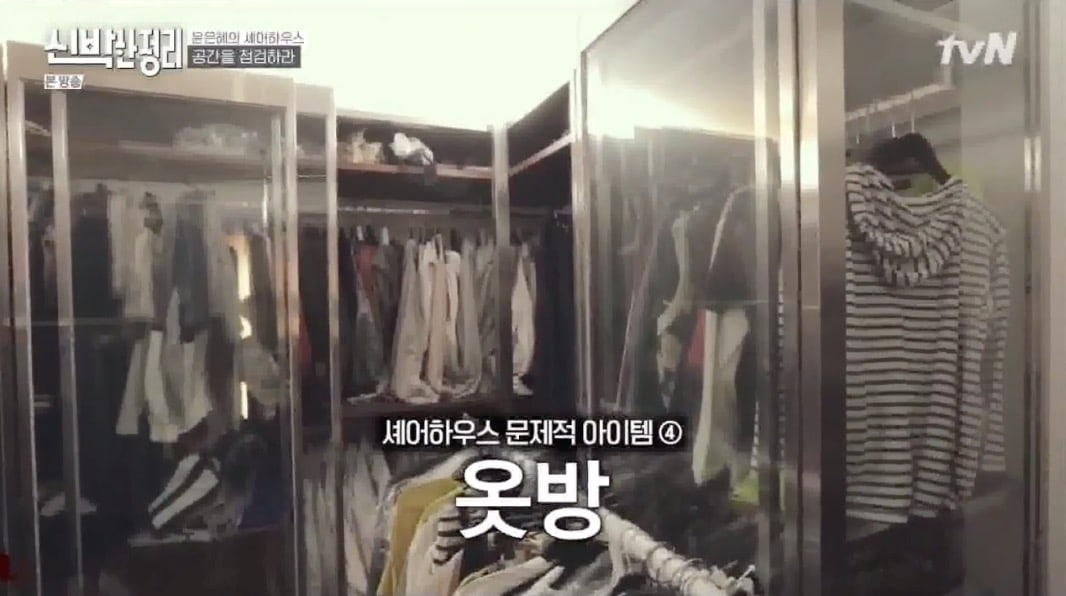 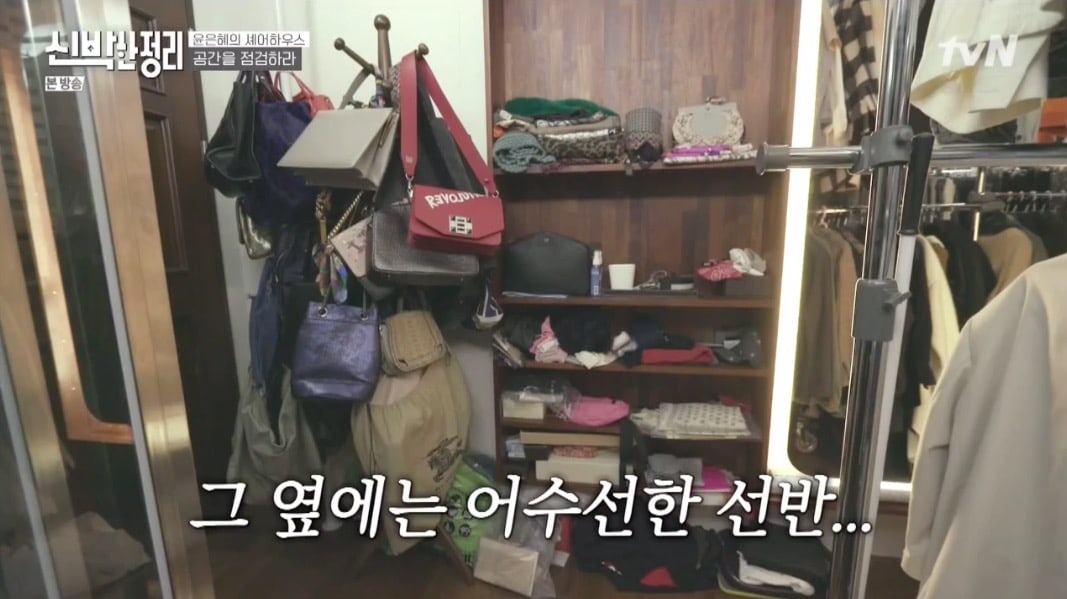 When the team was surprised to find all the storage for shoes in their home, Yoon Eun Hye said, “I particularly love shoes. I’m willing to share them with anyone that they fit.”

Their only television was in Yoon Eun Hye’s bedroom, so the three roommates tended to hang out together in her room. They’ve now spent five happy months together, but Yoon Eun Hye said she was having a bit of a hard time over a lack of her own personal space. 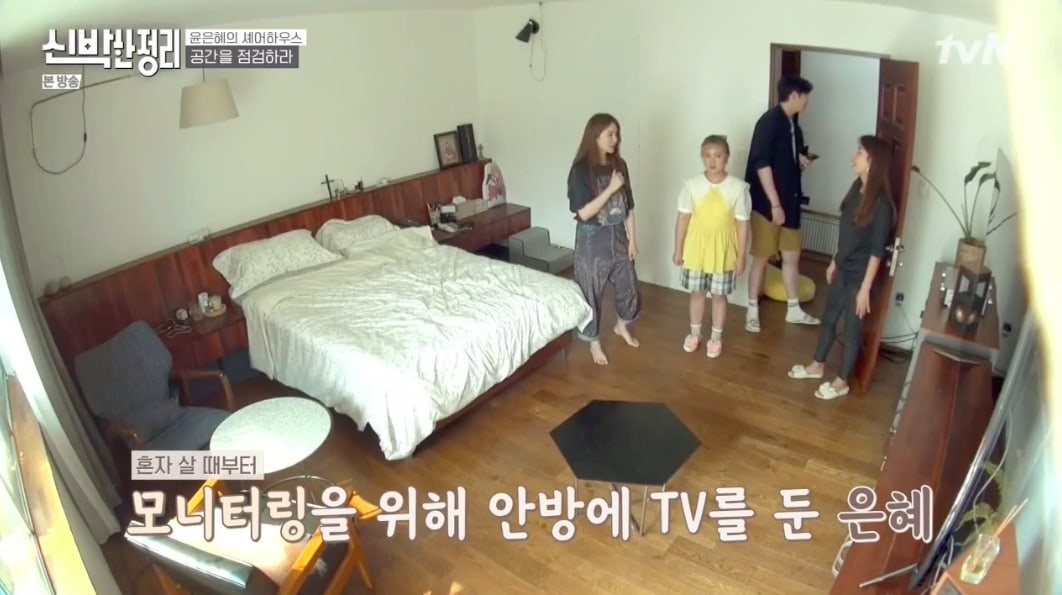 Another room had become full of all the items that didn’t have homes elsewhere in the apartment. “This room is making my head hurt,” said Park Na Rae, and the team commented on how the space was full of cabinets, drawers, and other storage. 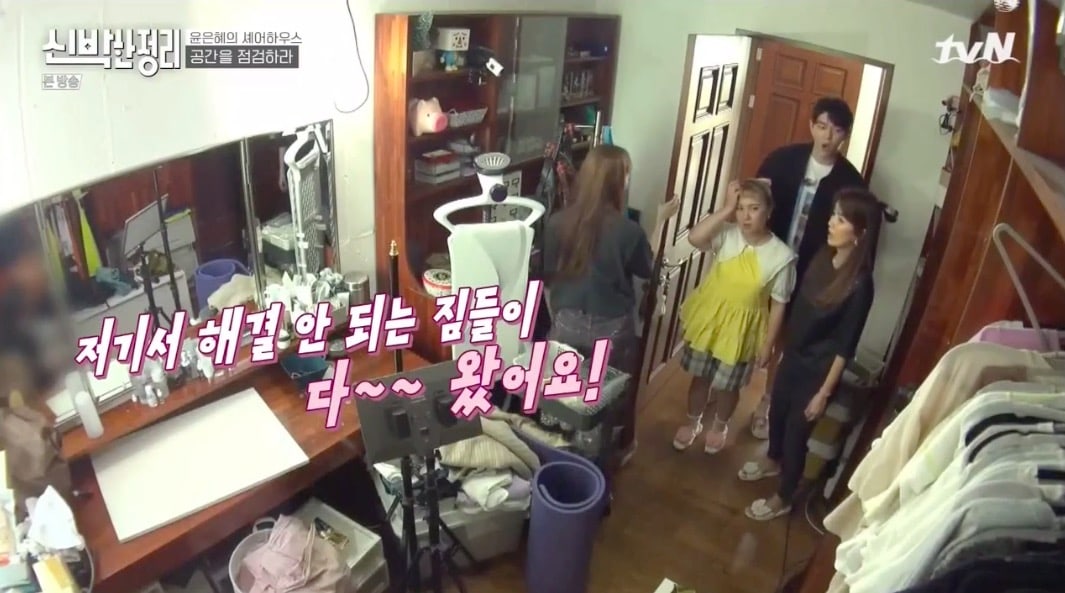 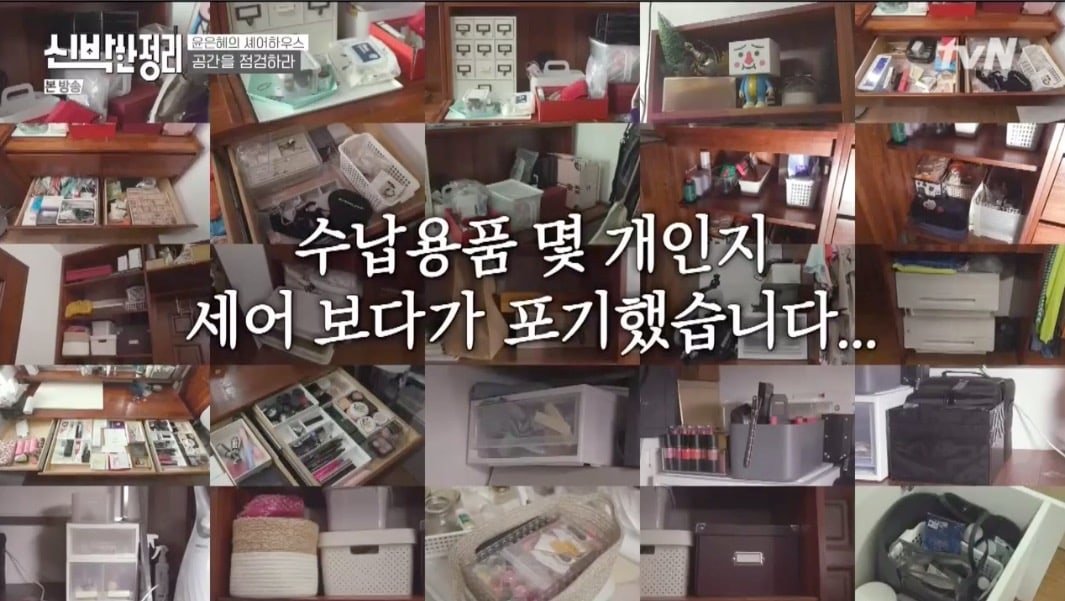 The actress also showed some of her art pieces, such as a work of art created with candle wax drippings. She shared that when she was younger, she had considered a career in art, and while she chose to become a celebrity, she’s still interested in studying art.

“When I was in third year of middle school, I was cast on the street,” she said. “We were poor, and my mother said to me, ‘Do you want to study art or do you want to be a celebrity?’ I stayed up all night worrying and then I decided I could do art later on.”

Yoon Eun Hye said, “If I had the space, I think I’d paint. I also wanted to find a studio.” Park Na Rae replied, “I think we’ll have to make you a studio.”

They also noticed that Yoon Eun Hye had a script and small purse from “Coffee Prince” stored in a high place.

“I don’t have any trophies in my house,” said Yoon Eun Hye. “They’re all at my parents’ home. It felt like I was too tied to the past. So I want to donate these. I hope that someone will take these and feel the blessing that I had.” 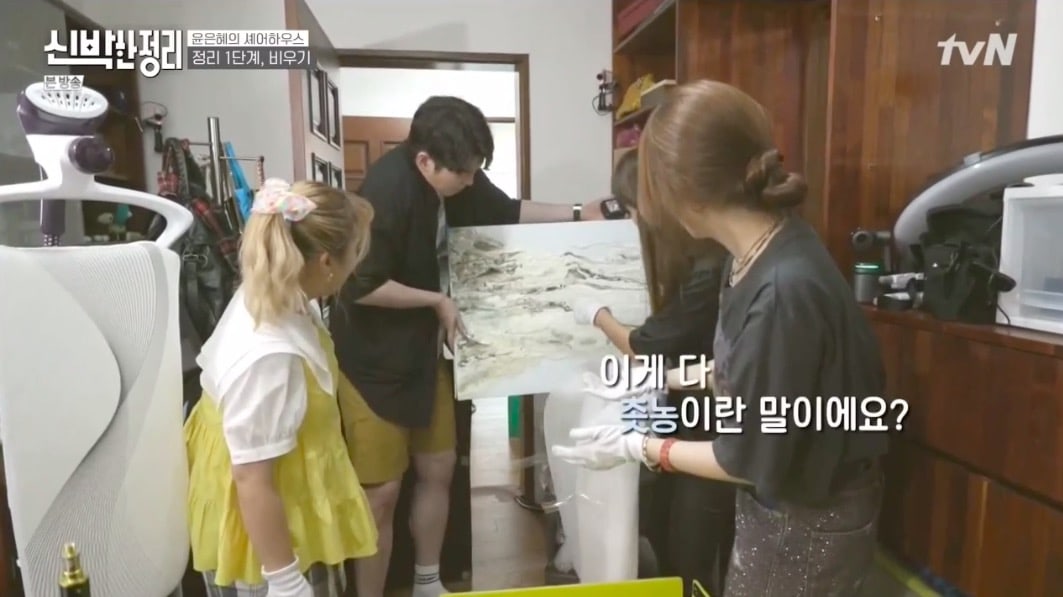 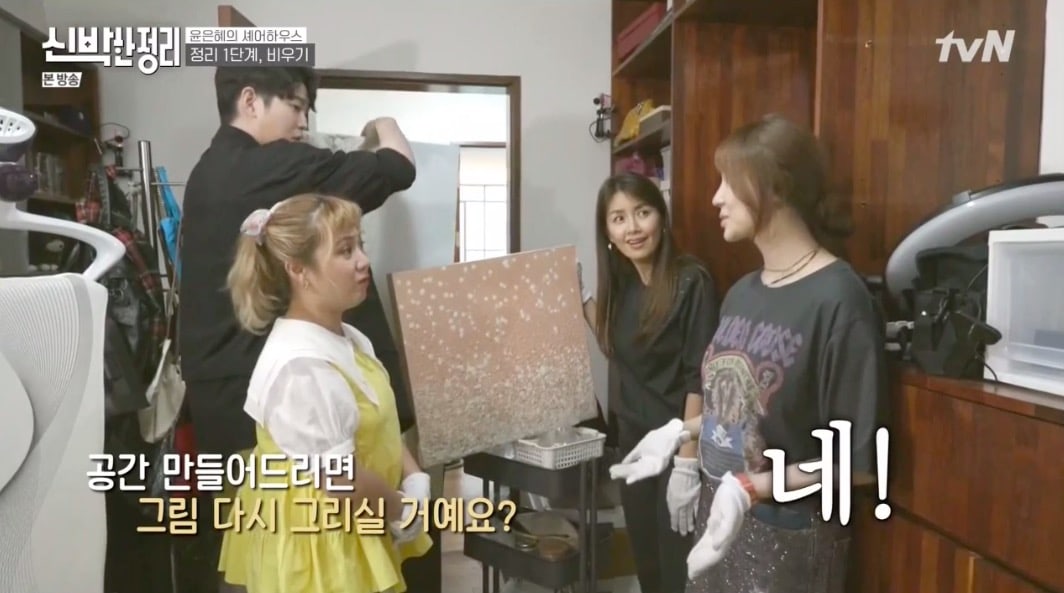 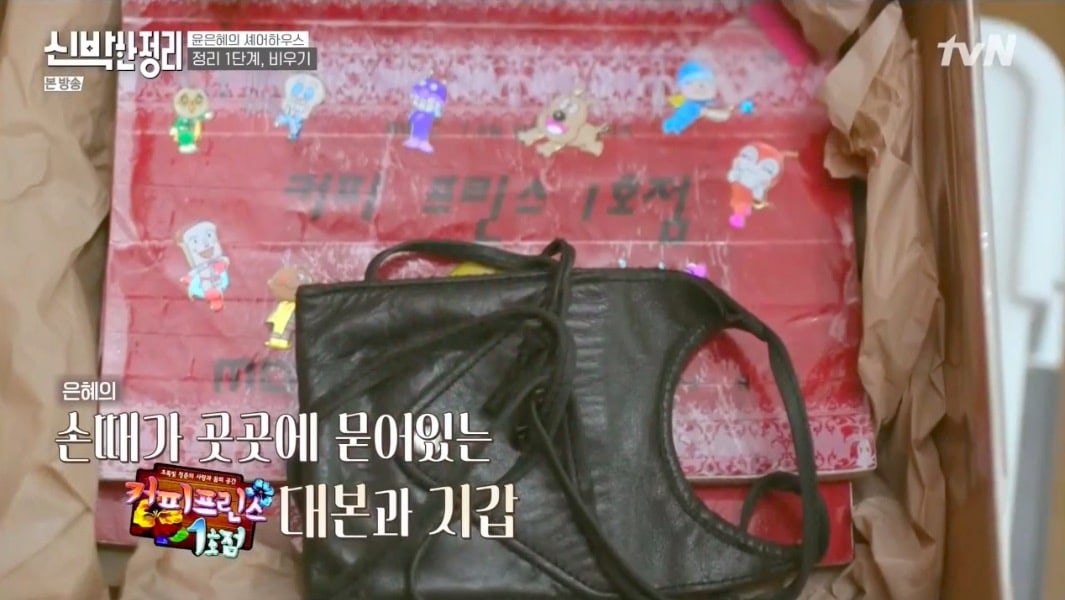 As their first task, she and the team brought all of Yoon Eun Hye’s and her roommates’ shoes out into the living room. “This doesn’t feel like something to boast about, I’m embarrassed,” said Yoon Eun Hye as she looked at all the shoes. They got to work at sorting the shoes into ones she needs, one she wants, and ones to get rid of. 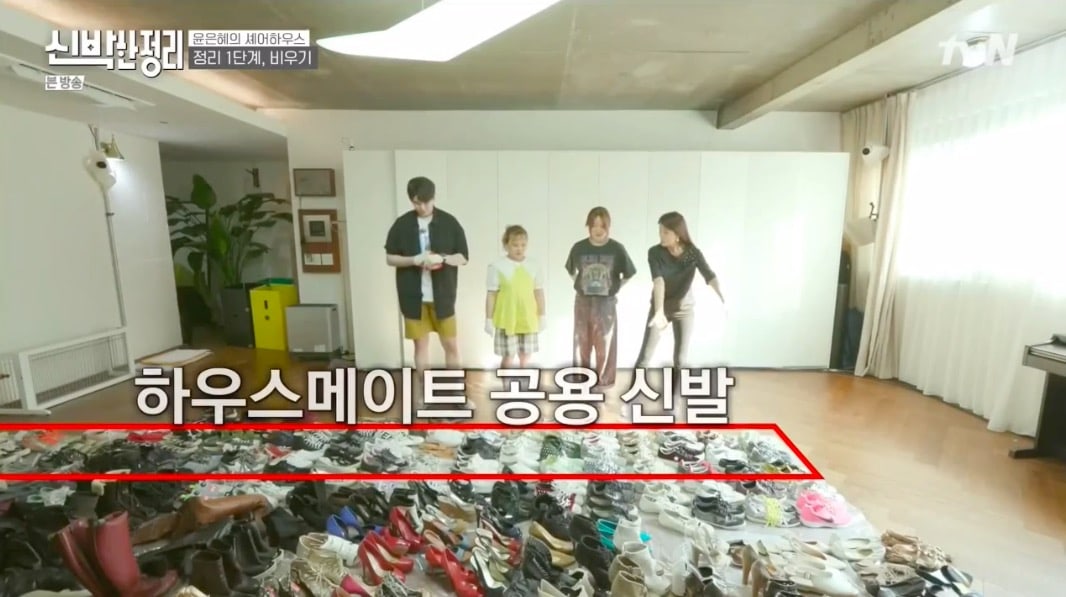 The first pair that Yoon Eun Hye picked up was one given to her by Shin Min Ah for her birthday. Even though she’d worn them so much that the soles had worn down, she wasn’t sure if she could bring herself to throw them away. 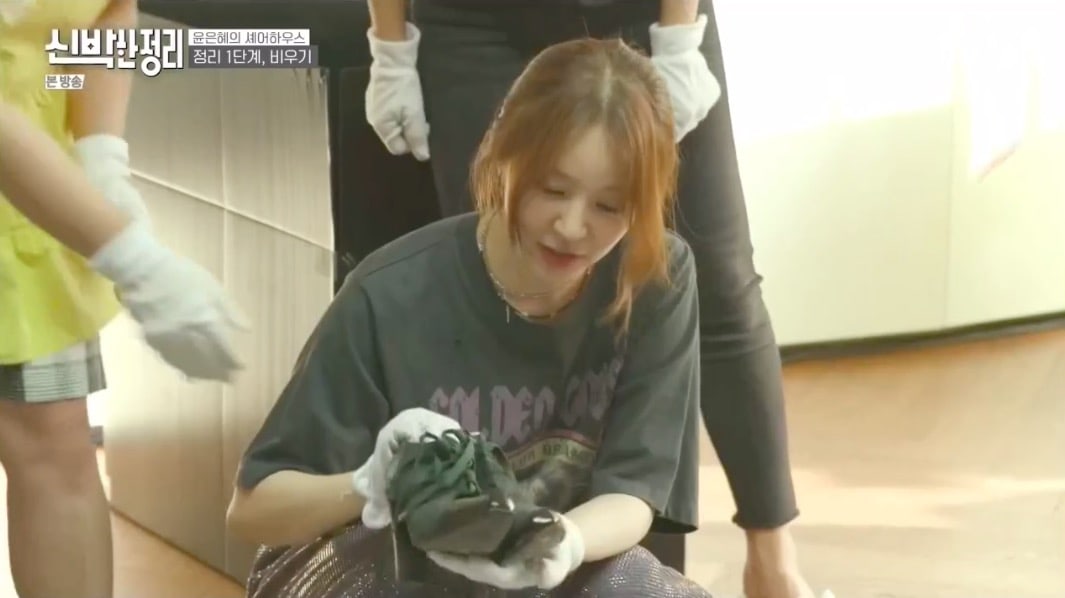 However, she resolutely got to clearing out many of the pairs of the remaining shoes, even at one point tossing three pairs at once.

Yoon Eun Hye also looked back on how her love for shoes had been influenced by her family’s difficult financial circumstances. “Hand-me-down clothes are still in good condition, but the shoes would have their soles all worn down,” she said. She explained that being able to buy shoes had been a unique source of enjoyment for her after achieving success, but she also said she felt better now that she’d cleared many of them out.

Yoon Eun Hye served the team a meal after they finished their work, and she and her roommates continued to clear things out. The show shared that they spend the longest time getting rid of belongings out of all the guests on the show so far, and they also got rid of the most things.

When Yoon Eun Hye returned to see her newly reorganized home, she was first surprised to see that there was even now space in the shoe rack by the entrance. “Where did they all go?” she asked, happy to see the organized space. 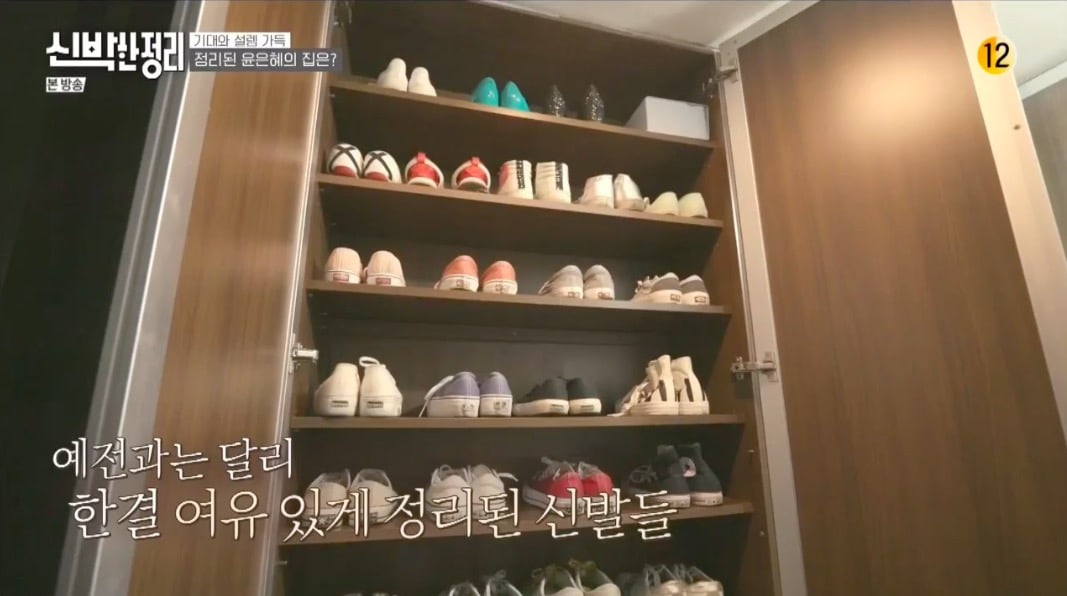 Yoon Kyun Sang then revealed the newly organized living room. Yoon Eun Hye was speechless and said, “I really love this.” In addition to getting rid of the wall of wardrobes, they also brought in the television that had been in her bedroom. 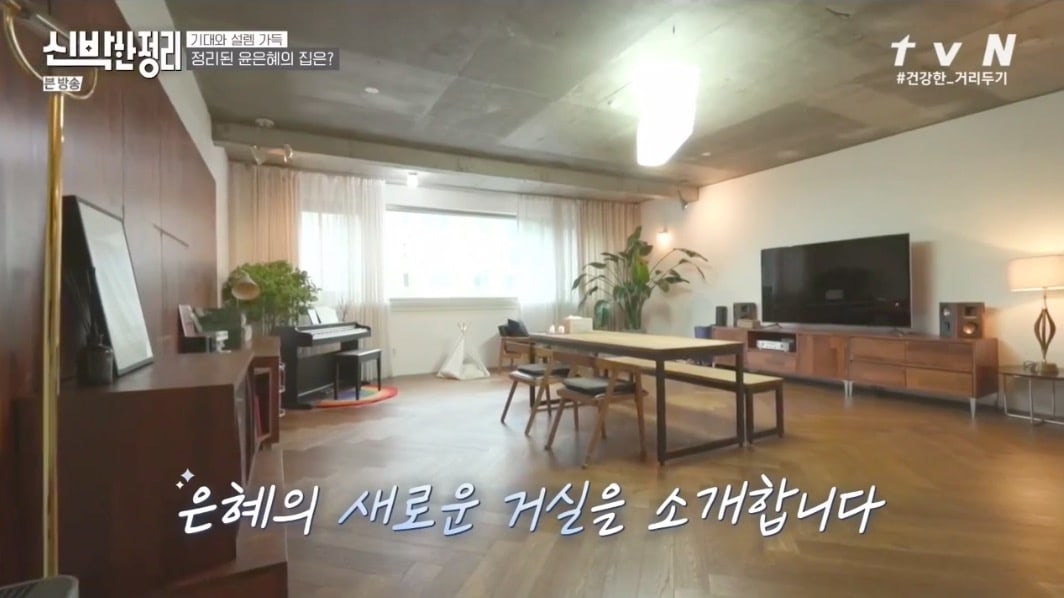 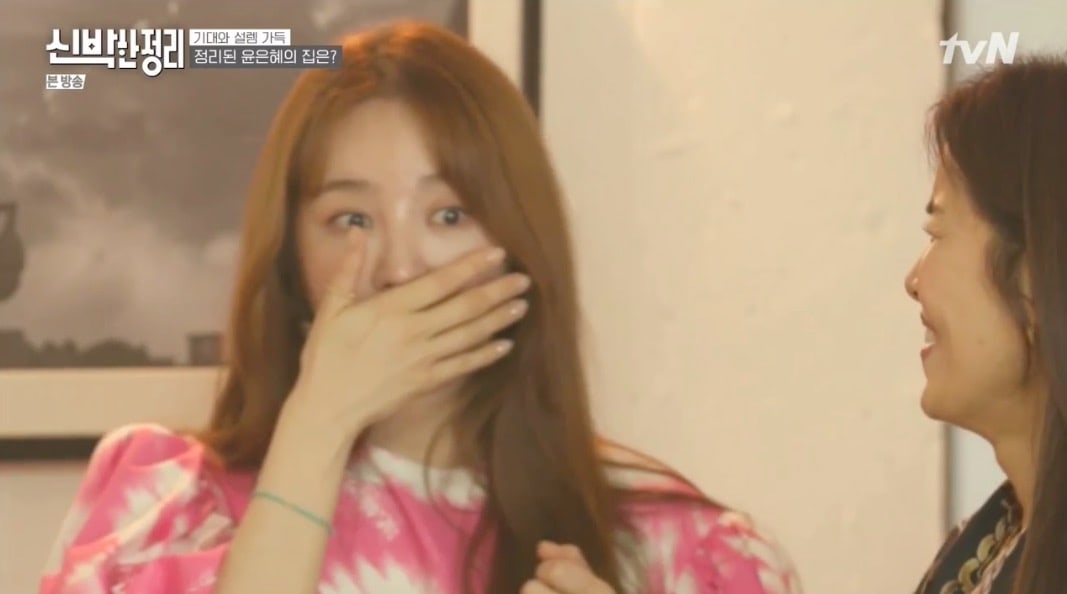 Their formerly dark and cluttered kitchen was also transformed into one that’s perfect for Yoon Eun Hye, who loves to cook. 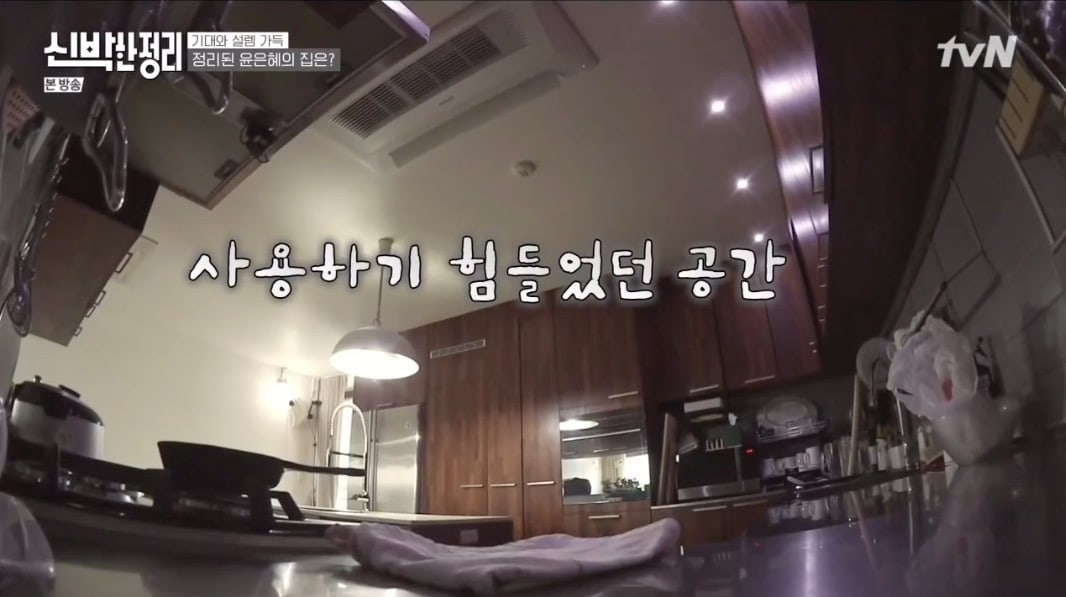 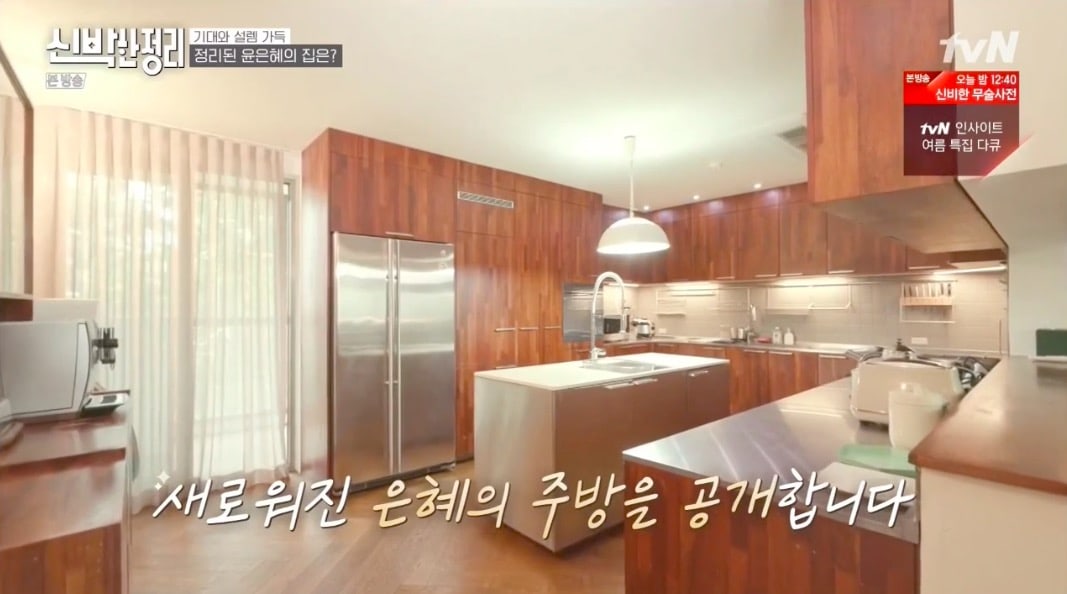 Her closet was also reorganized and was now easy to find clothes in, and the room that used to just contain clutter was transformed. When she saw the room, Yoon Eun Hye said, “I’ve got goosebumps” and became choked up.

Shin Ae Ra told her, “Actors need their own space.” Yoon Eun Hye said, “I think my heart’s going to explode.” While there had barely been room to walk around in the space before, it had been transformed into a room where she could do her makeup, read, film videos, and more. She was happy that she would now be able to take on many different hobbies in this transformed space. 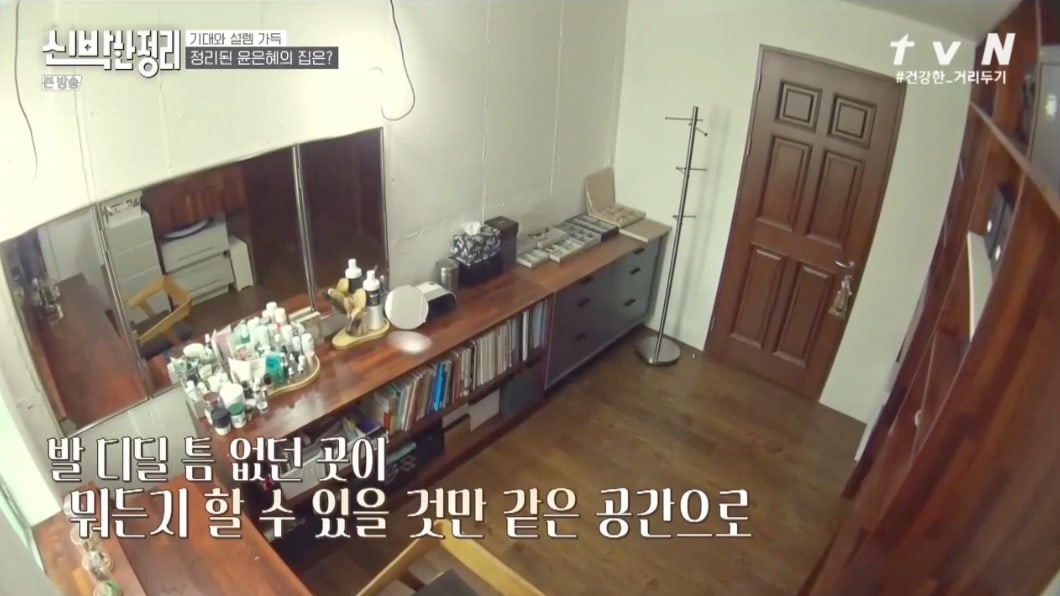 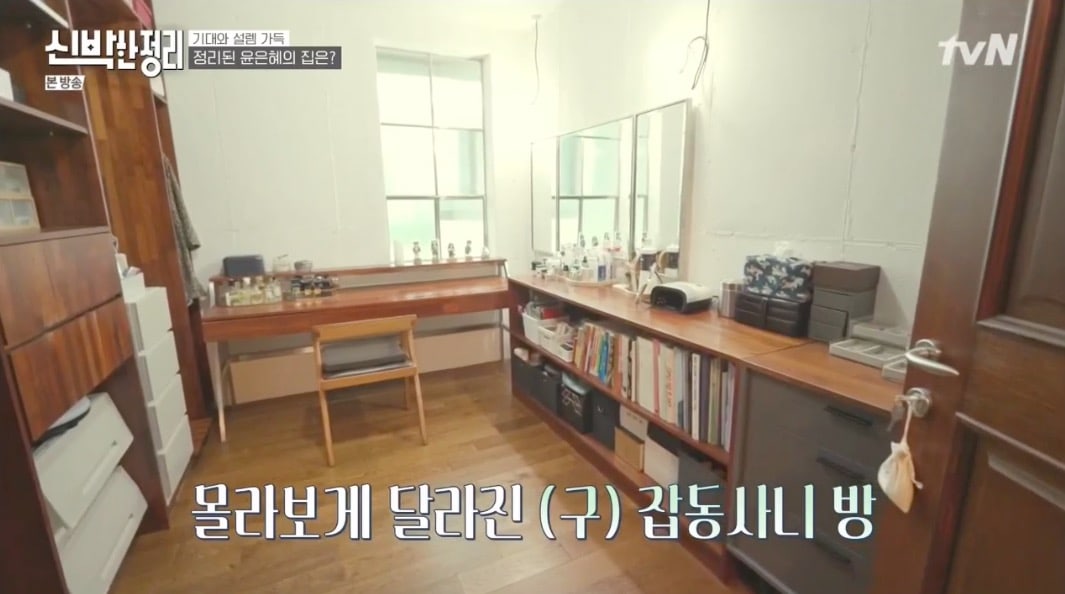 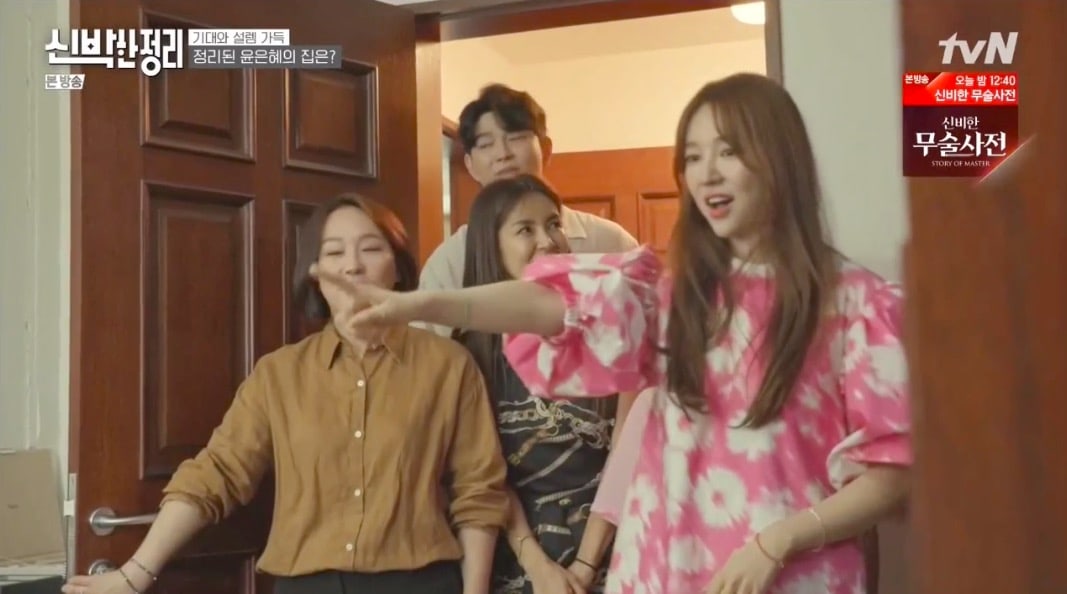 Her bedroom, which had been used as a shared space, had become a room where she could rest and relax. There was also an easel and canvas in the room, and the wardrobe that had been in the living room had been moved to her bedroom. Yoon Eun Hye became tearful over the easel gift from the “The House Detox” team.

She was touched to now have space to paint and she said, “I thought that you would set up this kind of space in the cluttered room.” She shared tearfully, “I think I’ll get really inspired before I go to sleep.” 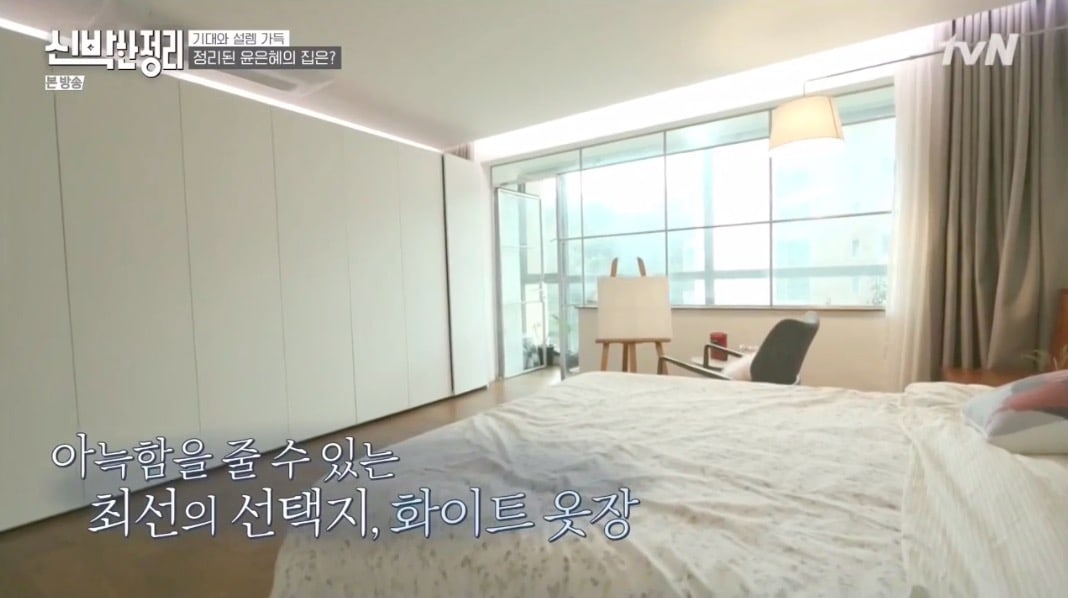 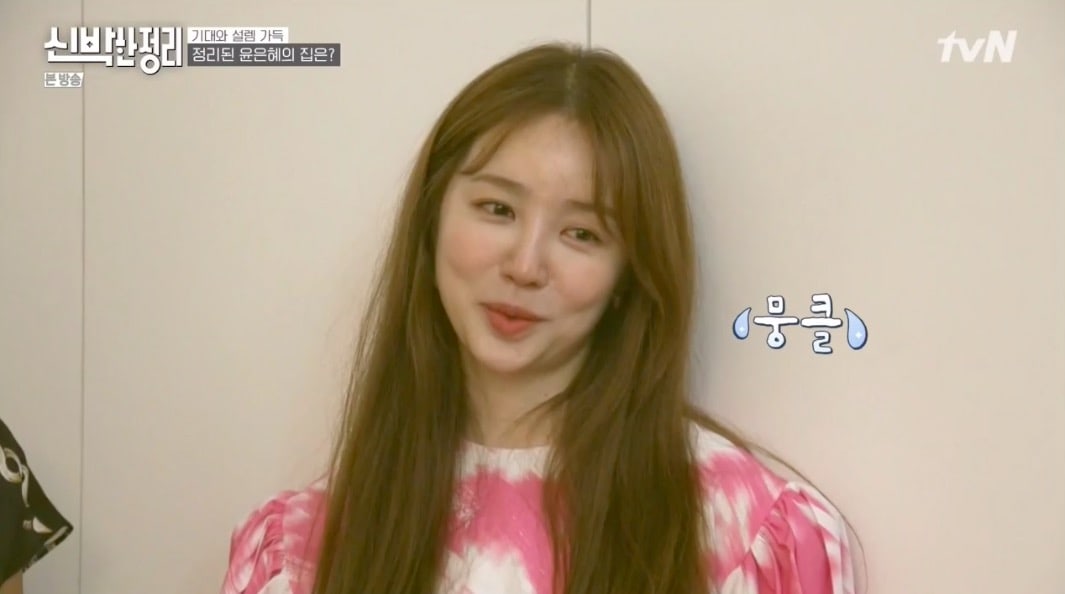 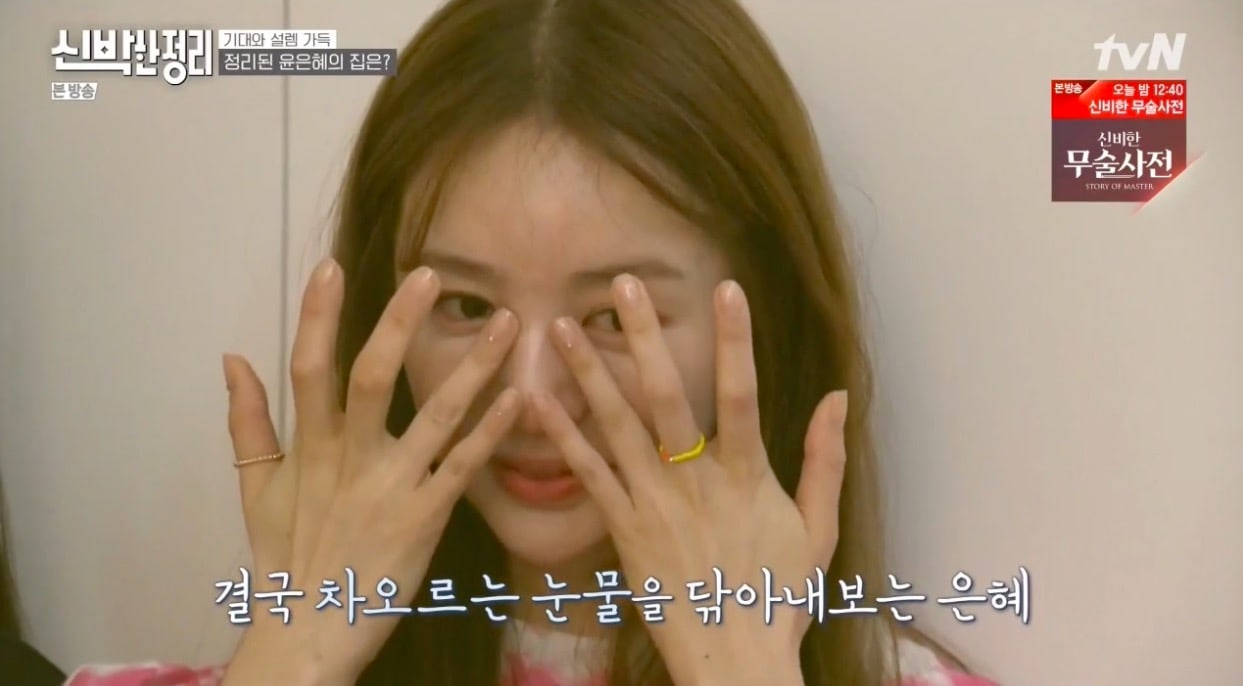 They also set up a mini garden for her in the windowed room outside her bedroom, transforming it from what had previously been another storage space and amazing her once again. 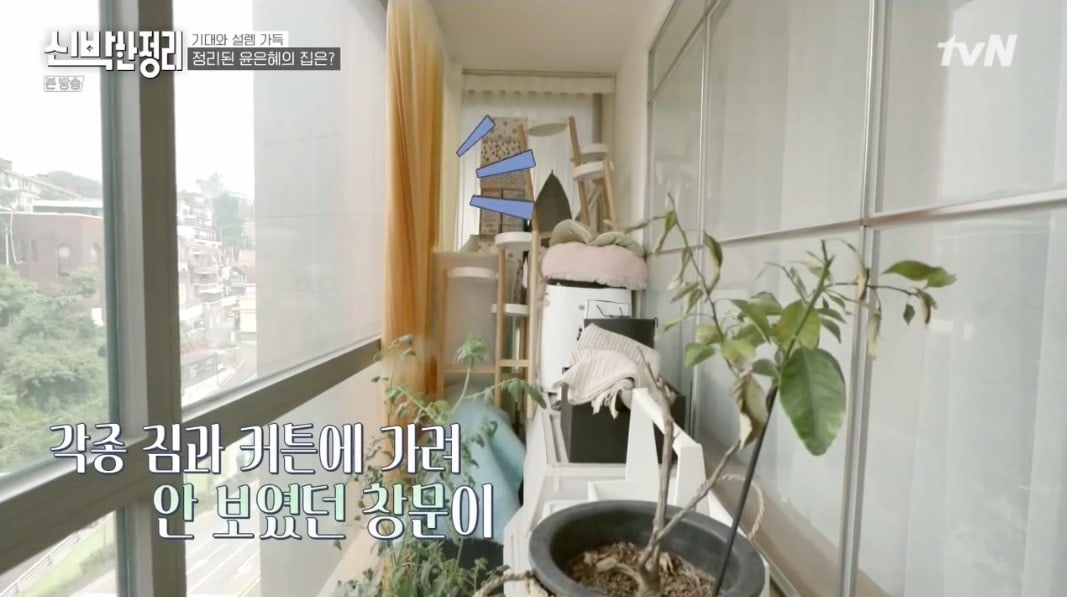 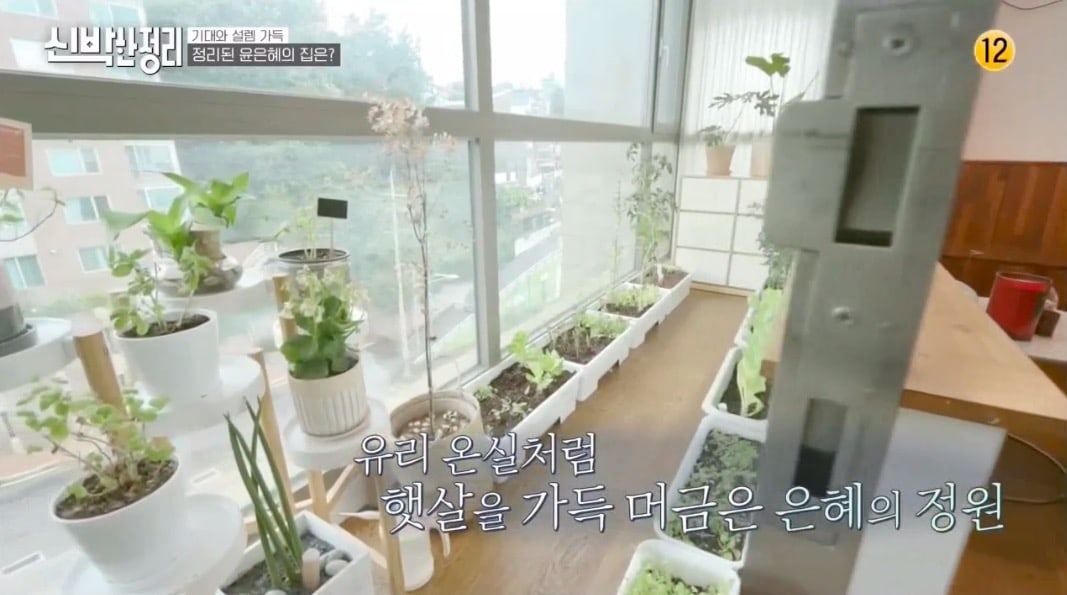 Watch Yoon Eun Hye in the drama “Love Alert” below!