Before Jung Eun Ji arrived, Sung Dong Il expressed his affection for his on-screen daughter, and when he asked her on the phone if she’s more excited to see Yeo Jin Goo or Kim Hee Won, she replied, “[I’m most excited to see you.]”

As soon as Jung Eun Ji arrived at the mobile home, she helped set up the awning and the wooden platform. When Kim Hee Won protested having Jung Eun Ji do any heavy lifting, Sung Dong Il said, “She made ‘Reply 1997’ a success through sheer tenacity.” 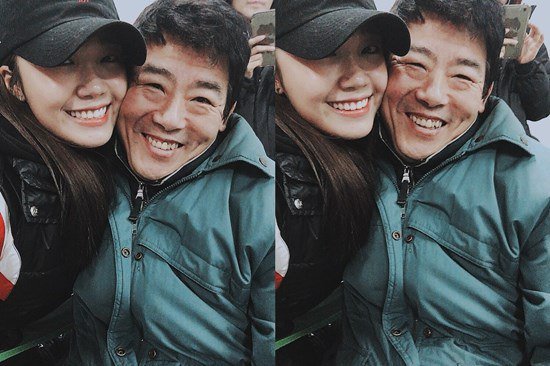 Yeo Jin Goo said that he enjoyed listening to Jung Eun Ji’s “Hopefully Sky,” and Sung Dong Il revealed that the song was one Jung Eun Ji wrote the lyrics for while thinking of her father. Jung Eun Ji added, “A few days ago, I held an online concert for the first time. My dad works abroad, so he usually is unable to come to my concerts, but he was able to attend the online concert. He was watching, and it felt really strange.”

On the way to buy ingredients for their dinner, Sung Dong Il reflected on his first meeting with Jung Eun Ji, which was for “Reply 1997,” when she was 20 years old.

Sung Dong Il asked, “What was [PD] Shin Won Ho’s reason for casting you? You had no acting experience at the time.” He immediately called Shin Won Ho, and the director explained, “One of our producers asked her to come audition, and they told me that they found someone who can speak the dialect.” Shin Won Ho said he had doubts she would be able to act, but upon hearing that she was already on her way, decided to at least meet with her. “When we had her [audition], she did so well. I deliberated for a couple of months, but the only person who had that rough, real dialect feel was Eun Ji. Rather than casting someone familiar without charm, I thought it would be better to have a charming newcomer.”

Later for dinner, Jung Eun Ji cooked soybean paste stew for the group, while Sung Dong Il brought out the tripe that Jung Eun Ji said she likes. Sung Dong Il revealed he’s currently filming a drama with Park Shin Hye, and said, “Shin Hye’s mother used to have a restaurant. I got this from Park Shin Hye, who asked her mother for it.”