Watch: Teen Top Discusses The Resurgence Of Their Songs And Chunji’s Military Enlistment

On August 14, Teen Top made on appearance on “Yoo Hee Yeol’s Sketchbook” where they performed some of their hit songs and talked about their resurgence in popularity.

Only four members were present due to Chunji’s enlistment in the military.

When Yoo Hee Yeol pointed out there was a missing member, the group shared Chunji went to serve in the military on August 10. They said, “We went to see him off. If we had a little more time, all five of us could’ve performed in front of many people, so it’s a bit sad.”

Then they added, “We had a meal together before he left, and about an hour before [his enlistment], he started to look nervous. We were eating seafood noodles, but he put his chopsticks down and started to shake his legs. We asked if he was okay, but he didn’t reply.” 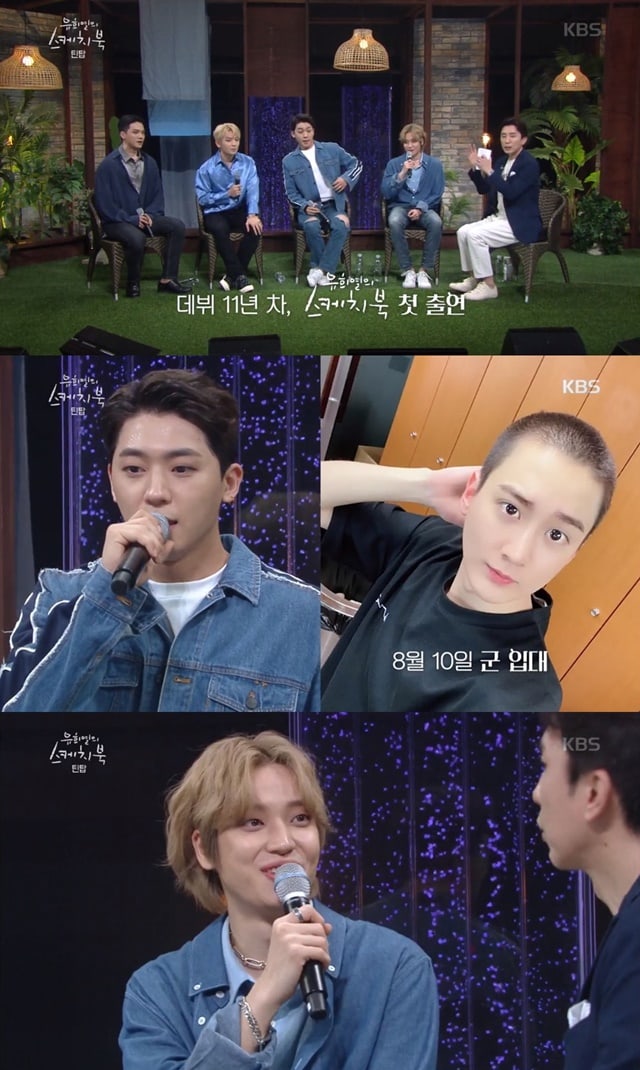 The group went onto talk about the resurgence in popularity of their old songs. Yoo Hee Yeol said, “I heard a lot about Teen Top from Yoo Jae Suk. He said their songs are so exciting. It’s been 11 years since their debut, but it’s the first time they’ve appeared on this show.” In response, Niel commented, “It’s my first time seeing you too.”

Yoo Hee Yeol shared, “At the time of your debut, you were the youngest boy group at an average of 16.3 years of age [by Korean reckoning], but you are now in your late 20s. I heard your songs are rising back in popularity again.”

Niel answered, “People are paying attention to us again because of our song ‘No More Perfume on You.’ So we prepared a medley with ‘Crazy,’ our first song that reached no. 1, and ‘Miss Right,’ the title track of our first full-length album.'”

C.A.P. commented, “I went to Olive Young (a beauty store) not too long ago and our song came out. I left quickly because I was embarrassed.” Then Changjo added, “People say there are three great songs that you listen to while hiding, which are BIGBANG’s Taeyang‘s ‘Look At Me,’ B1A4‘s ‘Baby Good Night,’ and our song ‘No More Perfume on You.'”

Yoo Hee Yeol pointed out “No More Perfume on You” was composed and written by Bang Si Hyuk, and Niel explained, “The lyrics mention things like, ‘Don’t spray perfume, I’ll get caught by my girlfriend,’ ‘Don’t put glitter on,’ and ‘Noona,’ so at first, I thought it was a song aimed to captivate hearts. There was a title song before this song, and producer Bang Si Hyuk played it for us, saying there was a song that would suit us well.”

Then the group shared their future goal, saying, “For a while, we made a comeback once a year, but the results weren’t that great. So we hope through this resurgence in popularity, we will be able to be as active as before.”

Watch Teen Top perform “No More Perfume on You,” “Crazy,” “Miss Right,” and “Rocking” below!

Teen Top
Yoo Hee Yeol's Sketchbook
How does this article make you feel?