Ahead of the highly-anticipated finale of “Train,” Yoon Shi Yoon and Kyung Soo Jin shared their final thoughts on the drama and also selected what they thought were the most memorable scenes.

“Train” is an original OCN drama about two parallel universes that formed after a fateful choice on the night of a murder. Yoon Shi Yoon stars as Seo Do Won, a violent crimes detective at the Mu Kyeong Police Station. In universe “A,” Seo Do Won lives with a sense of guilt because of his father’s sins. In universe “B,” his father’s crimes lead him into a life of corruption. Kyung Soo Jin co-stars as Han Seo Kyung, a woman who overcomes the trauma of her father’s death in universe “A” but lives only to get revenge in universe “B.” 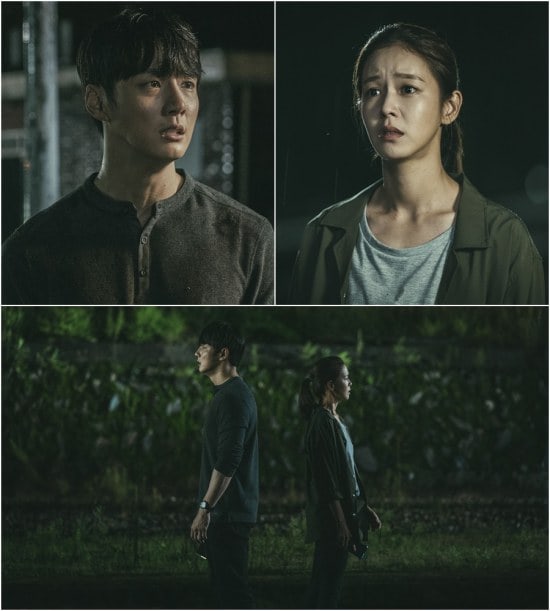 Yoon Shi Yoon began by conveying his gratitude towards the viewers, saying, “The filming has finally ended. Although it was only 12 episodes, it felt long. I want to thank all of the viewers who have stuck with ‘Train’ until the very end.”

The actor also commented on what it was like to play two roles at once. “Actually, the concept of parallel universes and having to play two roles wasn’t easy,” he admitted. “It’s thanks to all of the staff, my fellow actors, and the support of the viewers that I was able to keep pressing on and bring the drama to an end. I did my best until the very end, so please keep supporting ‘Train’ through the final episode.”

When asked about the most memorable scene, Yoon Shi Yoon selected a scene in the seventh episode in which Seo Do Won stops “B” Han Seo Kyung from taking her own life. He explained, “The ultimate purpose of Seo Do Won’s life is to protect the one he loves. I can’t help but focus on the fact that in universe ‘B,’ he protects Han Seo Kyung who he was unable to protect in universe ‘A.'” He added, “In particular, I think the line ‘I’m sorry for not being here, for leaving you alone,’ really leaves an impact, since it summarizes the sadness that the main characters suffer due to the tragically separated lives that they live in the parallel universes.”

Kyung Soo Jin also shared her final thoughts on the message of the drama. “‘Train’ is a drama with a good concept and plot, so I think it will leave a lasting impression,” she commented. “Although the drama dealt with crimes and investigation, I think the message buried inside the story is one that touches the heart.” Kyung Soo Jin followed up with a message to the viewers, saying, “Although the drama has ended, I hope it will linger in your memory for a long time to come.”

Kyung Soo Jin selected the shocking death of “A” Han Seo Kyung in the second episode as her most memorable scene. “I was really immersed in filming the scene where I call Seo Do Won on the phone for the last time. I remember being really sad,” she shared, adding, “Even just thinking about it now makes me sad.”

The production team commented, “We’d like to express our thanks to all of the cast and staff who worked together to create the new genre of ‘parallel universe mystery’ as well as the viewers. Stick with ‘Train’ until the end to make sure you don’t miss the plot twist and the resounding message of the drama.”