ITZY Opens Up About Struggles With Hateful Comments, Lacking Self-Confidence, Dealing With Prejudice Against Girl Groups, And More

ITZY spoke honestly about their difficulties in the industry, struggles with self-confidence, and more in a video titled “Letters to MIDZY” to go along with their “Not Shy” comeback.

In the video, Lia said, “My team members are all so good at dancing, and the [dance] performance is really what amplifies the concept of our team. Even I can see that they are charming and enchanting when they’re dancing.” She said with a laugh, “It doesn’t mean that I don’t like to be a part of the performance, it’s just that I’m not good at it.”

“ITZY’s performance is truly great, and I love ITZY, but trying to be ITZY is…” she continued. “I can actually see and feel the other members enjoying themselves on stage, and that’s when I realize, I’m a little bit different from them.”

She shared that “DALLA DALLA” was really hard, and while the song had achieved a lot for them, she felt guilty for being unable to just be happy about it. “Not only the performances, but also each rehearsal, was ridden with a lot of pressure for me,” Lia explained. “It was a stressful time for me. I didn’t feel confident as Lia of ITZY. But now I feel better, as I’m adjusting more and more.”

Lia went on to say that something that comforts her is that she knows that even if she’s struggling, every hard time will pass. 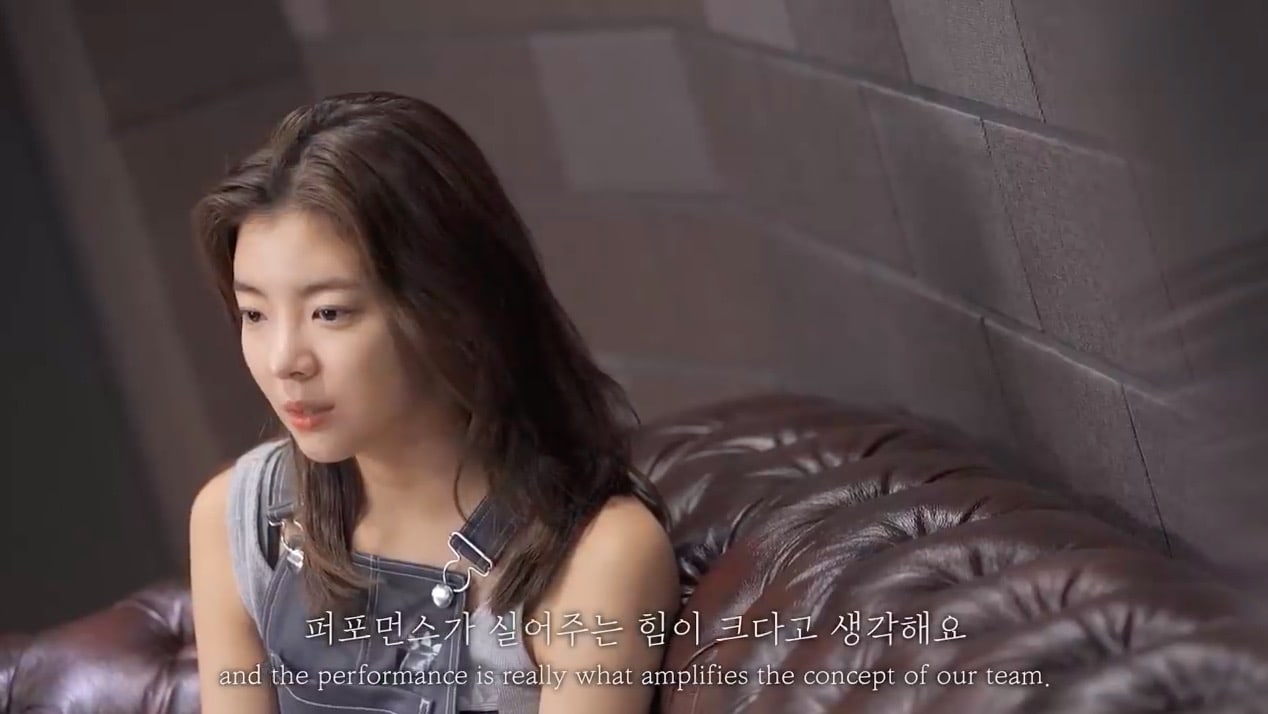 Leader Yeji’s part opened with her saying, “All the emotions I bottled up turned toxic.” She said in her interview, “I often feel sorry for myself and think, ‘Why do I keep everything to myself? Why am I struggling alone by not expressing how I truly feel?'” She added that feeling sorry for herself made her feel worse.

“When the team was first formed, I was thinking, ‘I hope I’m not the leader,'” she said with a laugh. “It’s because I’m not blunt or someone who can easily say what needs to be said. I felt pressure about that and a great sense of responsibility.”

Yeji shared that there was a time when she burst into tears when the group was having a talk together. “I was really thankful when the members told me that I don’t have to carry all of the responsibility, that they can help me, and that I don’t need to go through a hard time on my own, because we’re all members of the group,” she said. She also talked about how she’s been trying to write down her feelings in a diary. 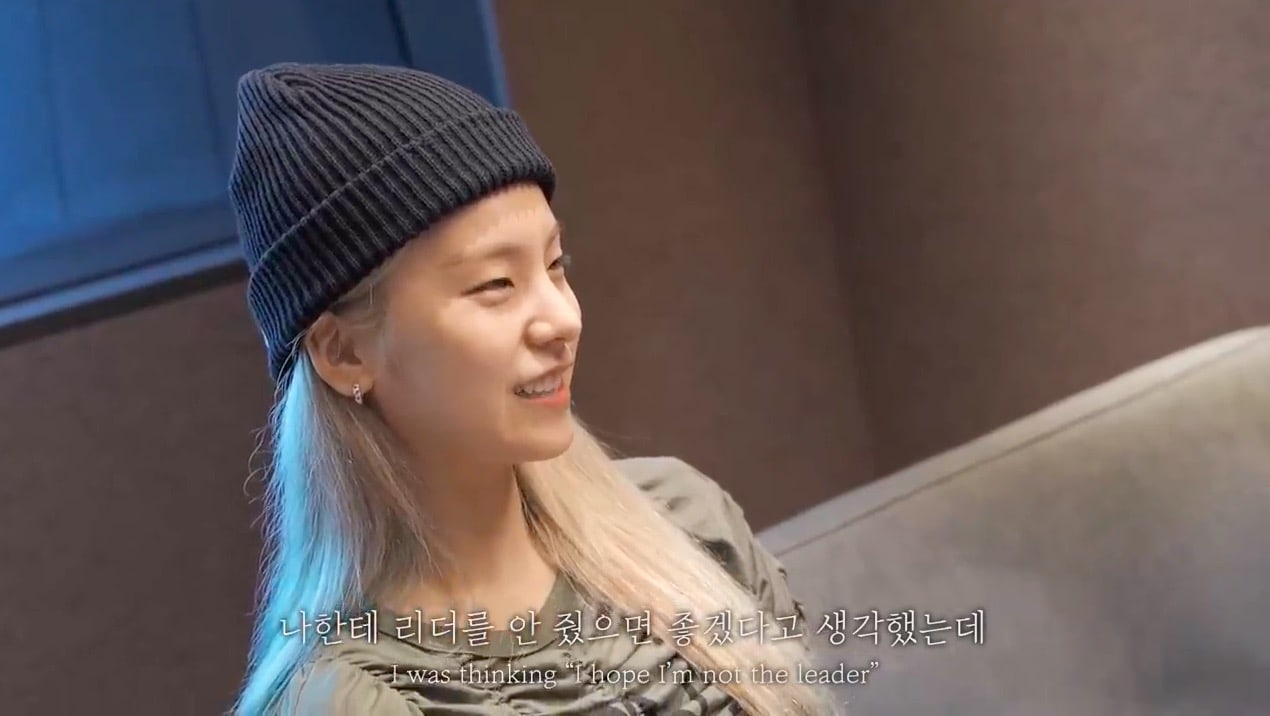 Chaeryeong’s part began with her saying, “I regret that I wasn’t able to take care of my emotional wounds.”

The idol spoke about how she’s been known by the public for a long time. While she’s grateful toward people who think of her as someone who’s worked hard and been through a hard time, there are others who mock her by saying, “There must be a reason why.”

“It’s really not true,” she said. “It seems like there are just a lot of mean people out there.”

Chaeryeong went on to say that the hardest time in her life was a year before their debut. “I don’t know why, but after becoming a part of the debut group which I’d dreamed about for so long, I thought it meant nothing if I was already being hated like this,” she said.

“I still have little habits like standing on the side when taking pictures or trying not to stand out,” she admitted. “I think I didn’t know a lot about myself, and I think I also didn’t take care of myself a lot. I’m trying to do so lately.”

She then said, “Yes, I feel sorry for myself sometimes too” and became tearful.

“I’m not singing this song because I’m confident and self-assured,” she continued. “All I know is I just want to give off the right energy to others. Now that I have fans who are rooting for me, if they knew that I was being shaken by a few comments, I think that would make them sad too. So I tell myself not to get like that, time is too precious. I’m working hard to control my thoughts like that.” 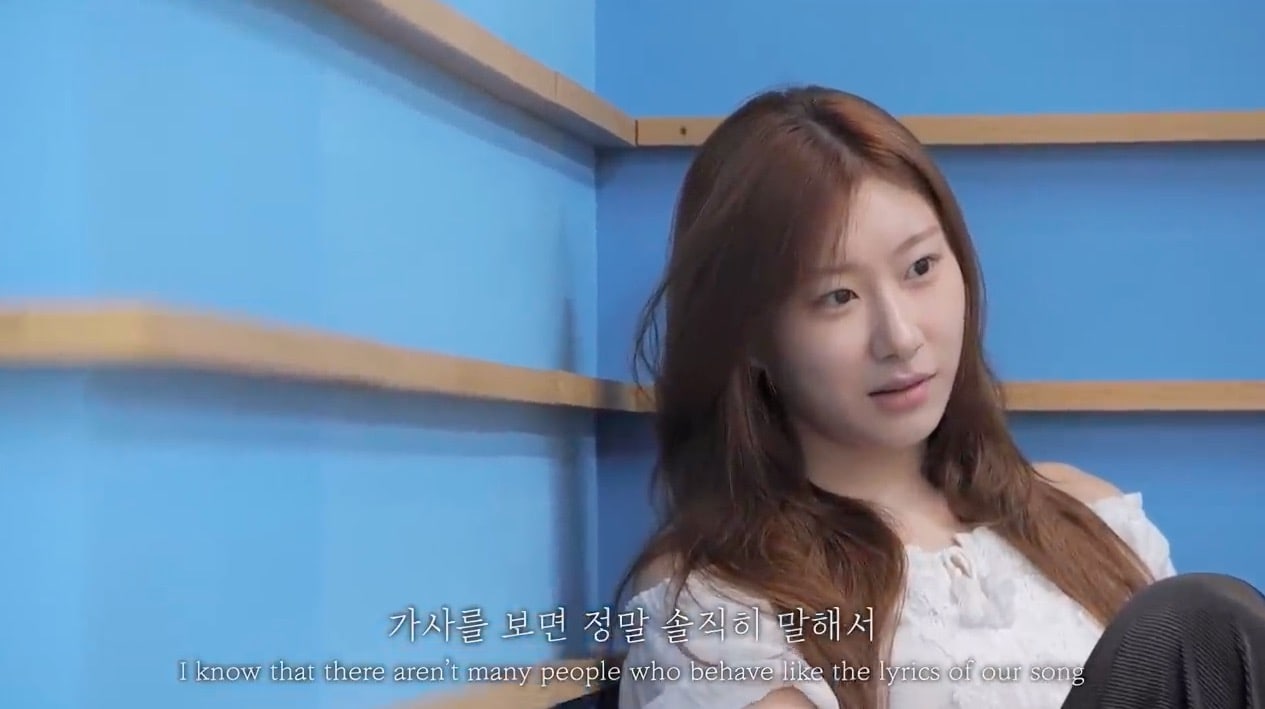 In Ryujin’s part, she spoke about how she’d been told a lot about how hard it would be to be an idol, however that just made her work harder.

She went on to say that a required part of the job of being an idol is maintaining your looks. She continued, “Rather than it being about ‘Idols have to be thin,’ it’s that being on the thinner side makes the dancing better to look at and you can wear a broader spectrum of costumes. Those are the kinds of reasons why we stay thin. Losing weight isn’t so much focused on, ‘I have to be thin because being thin is prettier.'”

“They say things like that sometimes,” she said, “but they don’t sound like compliments to me. ‘For a girl group’ sounds like they’re implying that we’re a little better than they expected. Of course they mean well, so I said, “Oh, thank you!’ but it doesn’t really feel like a big compliment. We didn’t create this performance while thinking, ‘That’ll do because we’re a girl group.’ I just hope they can just appreciate it as it is.”

She explained that she hopes that people will just say something like “They’re good” or “They’re cool,” rather than adding “For a girl group.”

“I want to be complimented without our performances being relative to anything else,” she said. 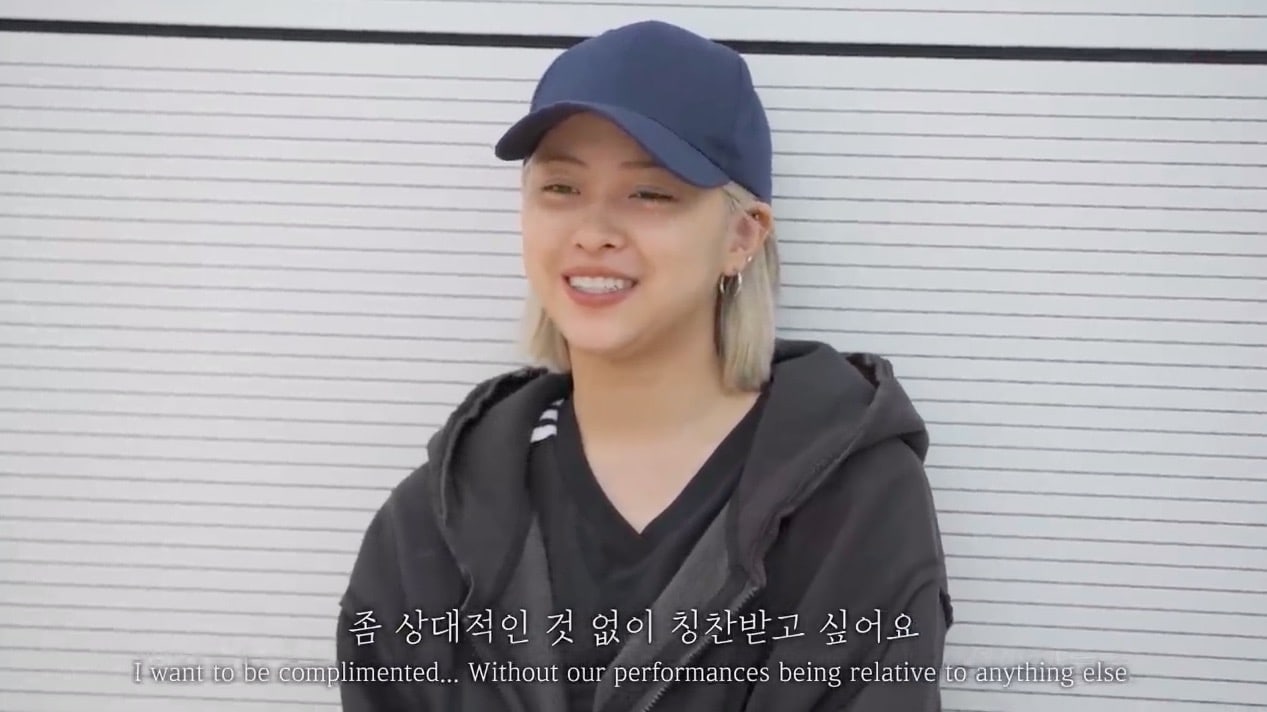 Finally, Yuna said, “We’re out in society fairly young. Sometimes there’s a lot of pressure, and I get stressed a lot, but it’s hard to express it no matter how hard it gets. Especially because I’m not the only one, it’s not easy to just be expressive about it.”

“I succeeded earlier than others in a good company, and it’s been going well,” she said. “So people look at me like, ‘What could you possibly have to complain about? That’s nothing, look how you’ve already succeeded.’ People have these perspectives, and I guess it’s all true. Because we’ve made it, and we have a good chance to do well now. Even if it gets hard, I can work harder. But there are times when I feel sad for myself.”

“From some point on, I’ve been drawing clear lines on what I can be responsible for,” Yuna continued. “I try to act within those boundaries, so I sometimes feel trapped. I’ve always wanted to show people who I really am. But I think, ‘When I did that, people didn’t like it’ or ‘If I do this, it might not be perceived well.’ I’ve started putting myself in a box like that. And often I get confused about the emotions I feel. I have to allow myself to sympathize with the things I feel, but my brain keeps telling me, ‘That’s nothing. Everyone goes through this.’ After telling myself that for a while, it gets confusing.”

Yuna shared that since she’s young, there’s a lot that she doesn’t know. “So I think to myself that I have to do everything perfectly,” she said as she became tearful. “I have to do well. But I also think that I’m not prepared for that.”

“If I had more life experiences before I did this work then I wouldn’t have had so much stress,” she said. “I think everything hits me harder because it’s all new to me.” 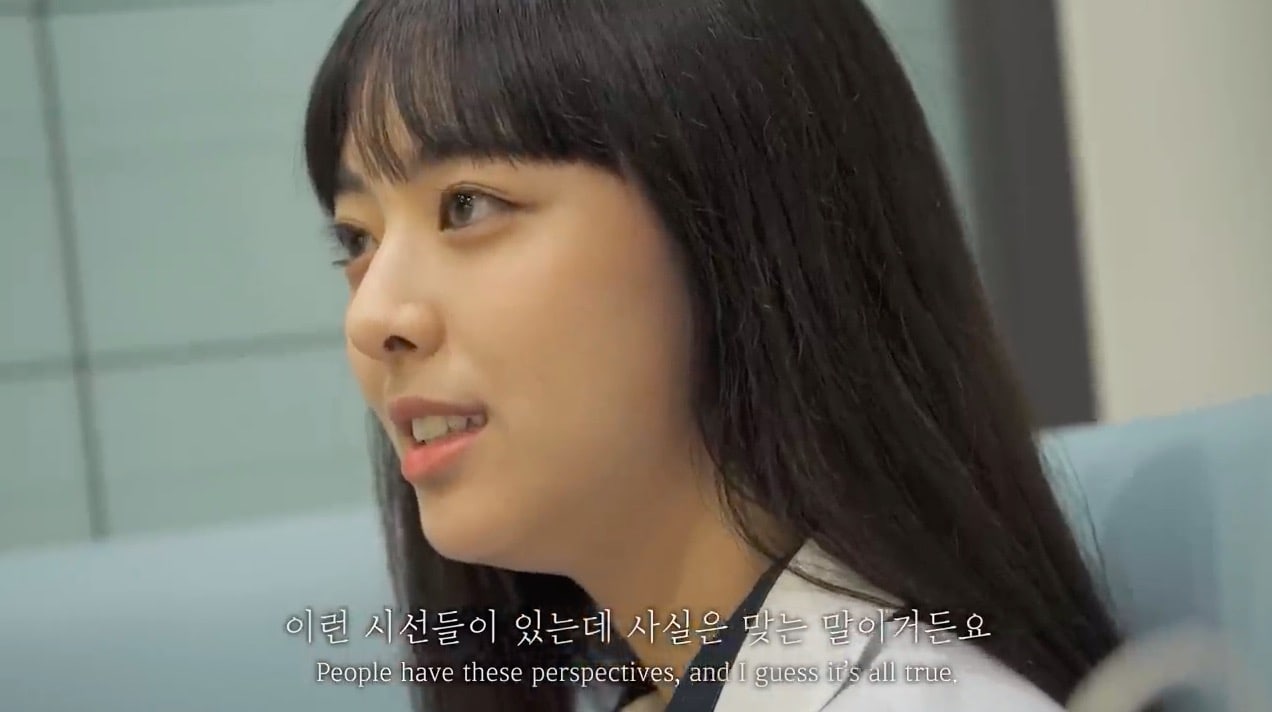 Watch the full video with English subtitles below.

Check out ITZY’s August 17 comeback with “Not Shy” here.