As soon as Sandara got to Lee Ho Cheol’s house, he adorably expressed how nervous he was. He began laughing loudly at all her comments, which made Heechul remark, “You don’t even really smile when you meet up with me.”

The group ordered chicken and spicy rice cakes, and while waiting for their food, Lee Ho Cheol discussed his status as a true Sandara Park fan. He revealed that he had watched the drama in which she made a cameo and proved that he knew all her parts in 2NE1’s songs by singing various songs for her. 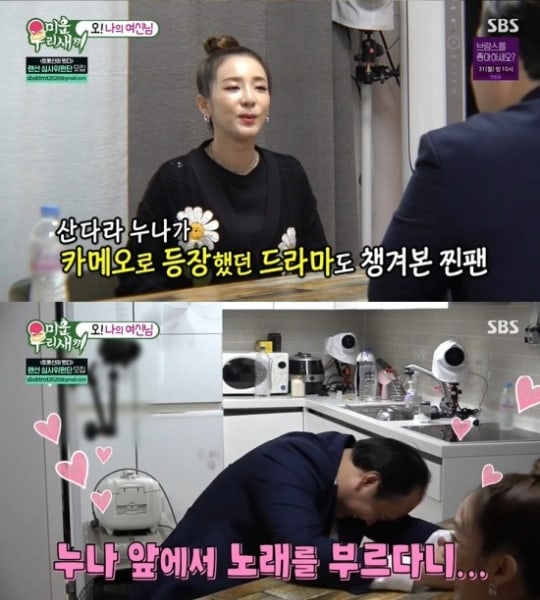 He also brought out one of his T-shirts and asked for Sandara’s autograph, requesting that she draw lots of hearts. Afterwards, the two took a picture holding the shirt together. 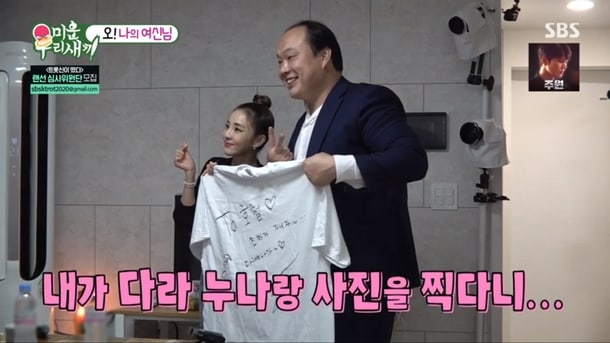 When asked what her hobbies are, Sandara answered, “I like ordering food like this with my friends, chatting, and going shopping.” Heechul commented, “He doesn’t like shopping,” to which Lee Ho Cheol hilariously retorted, “How would you know? I can change.”

Lee Ho Cheol later revealed, “I saw you one year ago. There’s a place in Apgujeong that serves great black bean sauce noodles. You were with another woman, and the two of you were talking very seriously. You were wearing a witch hat.”

He continued, “It would’ve been a bit weird to greet you, since you were drinking. I had my back to you, but all my attention was directed at you. I would pretend to look at the entrance and sneak a glance.” Heechul exclaimed, “You’re really a fan.”

Lee Ho Cheol added, “You got drunk then. When you were leaving, you did the moonwalk,” cracking everyone up and embarrassing Sandara Park. 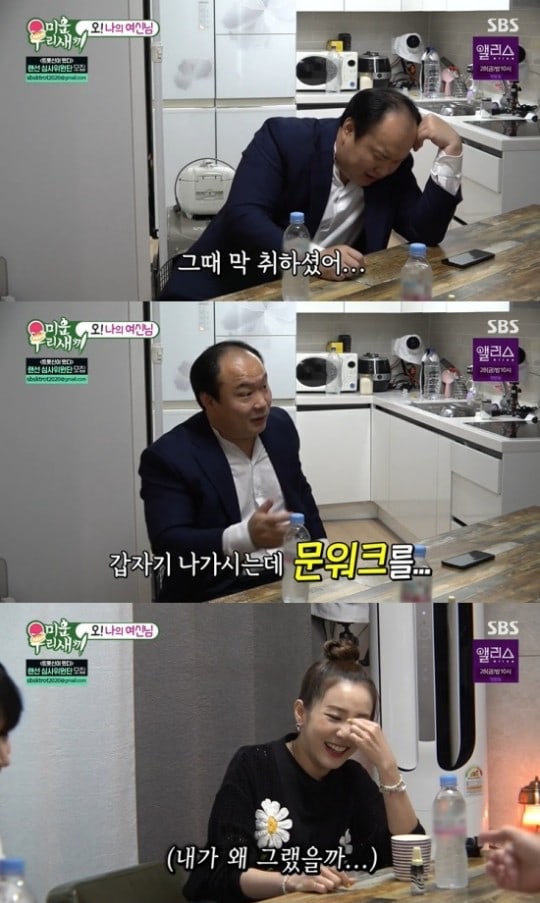 Following the broadcast, Sandara Park took to Instagram to upload photos from that day and wrote in the caption, “It was nice seeing you Ho Cheol~ Let’s have black bean sauce noodles next time! With Heechul and my cute dongsaeng [younger sibling or friend] Ho Cheol~”

The latest episode of “My Ugly Duckling” will be up on Viki soon! In the meantime, watch last week’s episode below::