Red Velvet’s Seulgi Shares How She Felt About Unit Debut With Irene, Her Thoughts On Potentially Promoting Solo, And More

In an interview with Allure Korea, Seulgi opened up about her real personality, talked about promoting with Irene as Red Velvet’s first sub unit, and more!

Red Velvet — Irene & Seulgi made their debut in July with their first mini album “Monster,” and Seulgi’s photo shoot with the magazine took place after wrapping up promotions.

Asked to share how she felt when she got back on stage for the first time in a while to perform “Monster,” Seulgi said, “It was really my first time being at a music show in a while. I was so nervous. I was really worried too that I might not be able to find the right camera. We’d practiced for a long time, but I still talked about that kind of thing with Irene a lot, about how I was really nervous and worried over whether I’d be able to do well.” 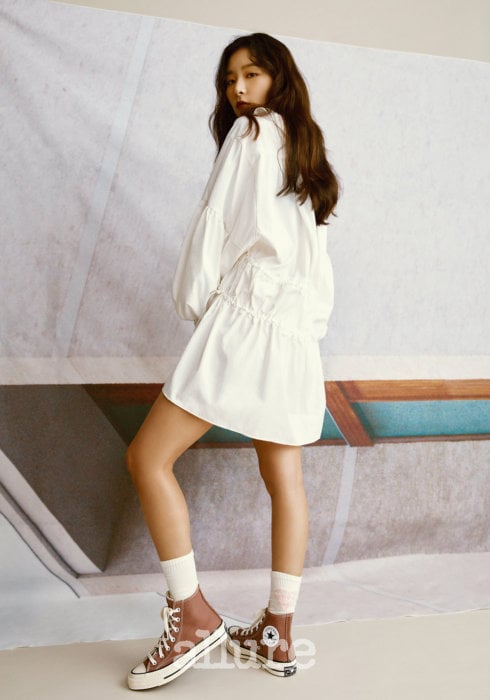 She shared that Irene had told her, “You can do well! When we do our comeback later, you’ll be doing everything!” Seulgi said, “Looking at it later on, I really did do it, just like she said. And I was also really restless, because our comeback had been pushed back a lot.” She laughed, “We’d filmed variety shows before to fit with the planned timing, so it seemed like people would say, ‘Why are those two suddenly on this show?'”

Seulgi shared that after “Monster” came out, she’d asked a lot of people around her what they thought. “It was our first time trying it and it was a concept that we’d never even imagined, so I was worried,” she explained. “I think I needed to hear the opinions of the people around me. Some people told me, ‘Who could pull this off, if not you two?'”

When asked who it was that said that, Seulgi revealed that it was their members. “They supported us by saying that it was possible because it was the two of us, which gave me strength,” she said. 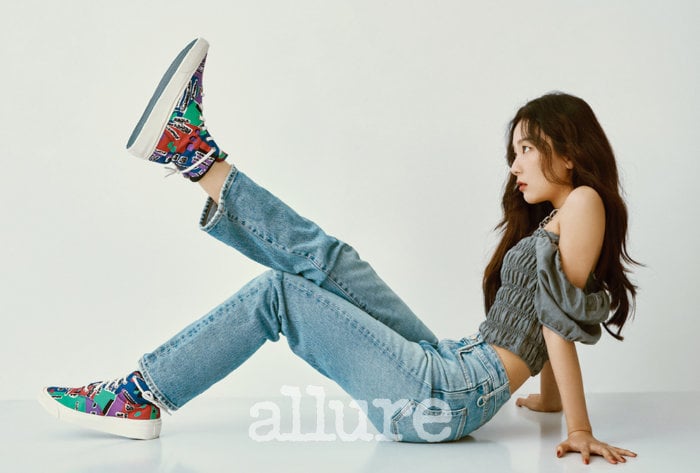 The interviewer mentioned that Seulgi had previously said that she thinks of hands as being important when dancing. “I learned that it’s possible to express things in detail even with your fingers,” said Seulgi. “We weren’t just doing choreography, we also had to use our heads, so I felt a bit out of it, but at some point we were really doing it. We got more confident, and it was something that no one else had tried and we became sure that fans would like it when the two of us did it, so we were able to have more fun doing it.”

Seulgi also talked about how she does well at things if she focuses, and she said she could feel during their “Monster” promotions that the people watching were also focusing. “A lot of people told me that they kept watching without being able to look away, and it made me really proud since it seemed like we were all feeling that way,” she said. 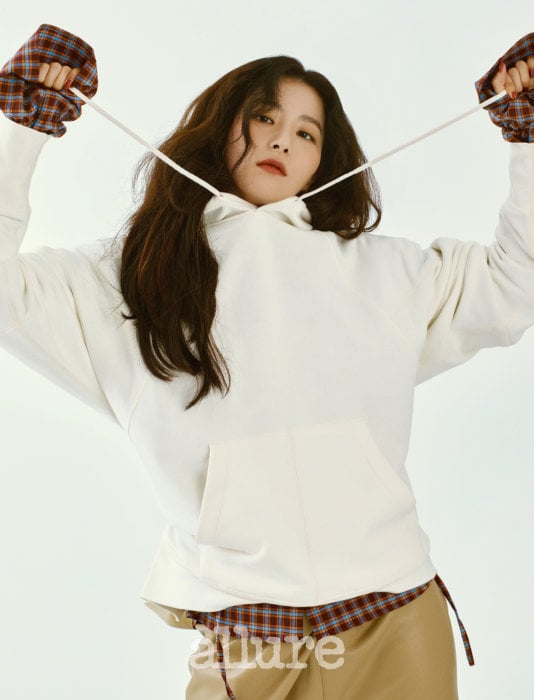 The idol went on to talk about her solo song “Uncover.” She said, “‘Uncover’ started with choreography from our concert. When they asked me what kind of solo performance I wanted to put on, I thought it would be good if it could be about my own deep story. It’s my story, but it could be everyone else’s story too. I thought that everyone wears their own mask. We can’t express everything and we hide our feelings inside, and we live our lives while wearing a smiling mask. But down at the bottom there are emotions and a whirlpool, and we feel a yearning about how we can’t express those emotions. I was like that too. In our concert performance, I rip up a smiling face at the start. That’s how ‘Uncover’ came about.”

Seulgi shared that she’d wanted to show her inner feelings through the song, and so she aimed to make the choreography as free as possible. “I’m the type of person that’s really conscious of what other people think,” she said. “When I perform, I have the mindset that I won’t care what others think and will express everything I want to say in three minutes, but it my regular life I can’t do that. I wanted that to be the message. ‘Let’s cast off myself and fly around freely.'” 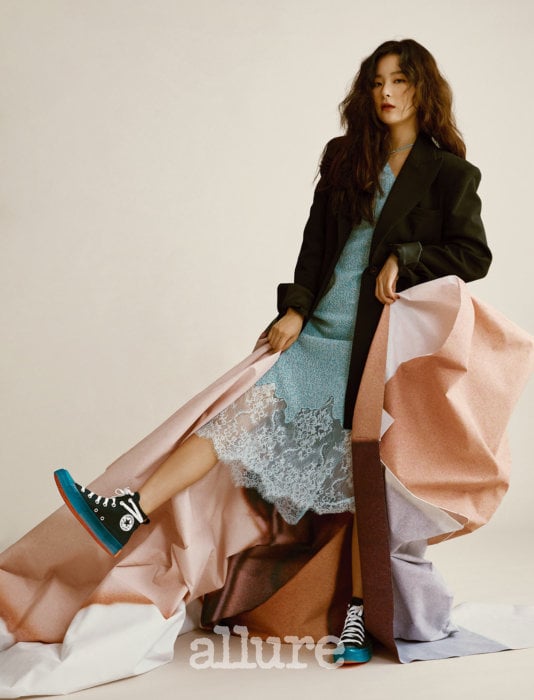 The interviewer mentioned that perceptive people tend to use more energy, and Seulgi said, “I’m perceptive too. But I’m the type to let things go, so that I can have time for myself. That’s how I am. As time passes, I quickly get calm.”

Seulgi talked about what it’s been like to perform without a fan audience due to precautions to prevent the spread of COVID-19.

“I get more strength when we’re performing for cheering fans,” she said. “Even if I’m tired, I don’t get tired out. But this time around, I got tired out really fast (laughs). Instead, I tried to gather up my energy so I could energize everyone.” 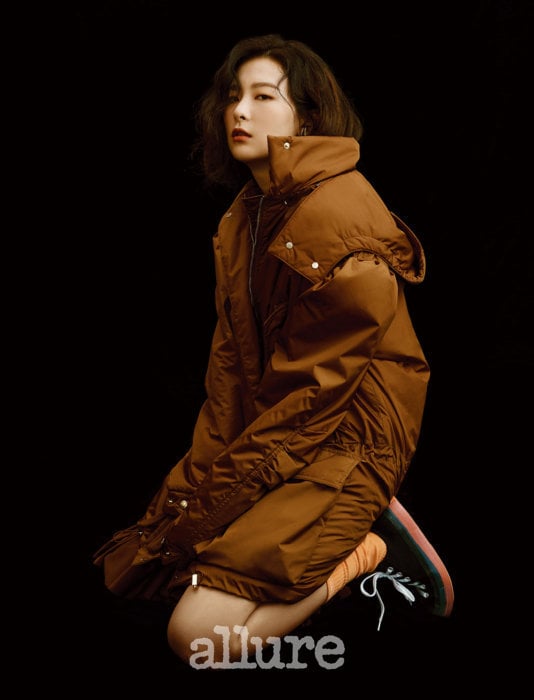 When asked how she feels when she meets casual listeners who enjoy Red Velvet’s songs but don’t know the members individually, Seulgi said, “It makes me happy, of course! It’s inspiring and makes me want to work harder. I’d like it if people thought, ‘Red Velvet’s voices sound good together,’ ‘Wow, they do really unique music,’ ‘Wow, they’re a pretty fun group.'”

When asked what she’d like to do if she one day makes a solo debut, Seulgi said, “I want to try being a solo artist too, because I can show more of what’s in my head. But when it was the two of us, I really missed the way it felt with all five of us, because it was really fun when the five of us were working together. I once again realized how precious it is to be five.”