The full lineup of SBS’s “2020 SUPER ON:TACT” concert series has been unveiled!

“2020 SUPER ON:TACT” is a series of online concerts that will take place every Sunday at 8 p.m. KST for four weeks between September 27 to October 18. The concerts will be streamed live through Naver’s V Live.

In addition to the previously revealed lineup of MONSTA X, Stray Kids, and ITZY on the first day (September 27) as well as SEVENTEEN and TXT on the second day (October 4), IZ*ONE has joined the second day lineup.

AB6IX and ATEEZ join MAMAMOO for the third day (October 11) lineup, while The Boyz, (G)I-DLE, CRAVITY, and TREASURE will perform on the fourth and final day (October 18).

Tickets can be purchased through Gmarket Global, Interpark Global, or Qoo10 Global.

The lineup has been announced for the second concert of SBS’s “2020 SUPER ON:TACT”!

In addition to MONSTA X, Stray Kids, and ITZY on September 27, it has been confirmed that SEVENTEEN and TXT will perform at the second concert on October 4 at 8 p.m. KST.

Stay tuned for the lineups of the final two concerts!

The lineup has been unveiled for the first day of SBS’s “2020 SUPER ON:TACT” concert series!

MONSTA X and ITZY were previously confirmed to perform, and it has now been revealed that they will be performing on September 27, which is the first day of the concert series. Stray Kids has also been announced to join the lineup that day.

Stay tuned for the next lineup update!

SBS has unveiled the first lineup of performing artists for its upcoming “2020 SUPER ON:TACT” concert series!

As part of its ongoing “Super Concert” series, SBS will be holding a number of special online concerts this fall. Entitled “SBS Super Concert – 2020 SUPER ON:TACT” (a play on words mixing the catchphrase “untact” meaning “no contact” with the “on” from “online”), the event will give both domestic and international fans a chance to enjoy a “SBS Super Concert” in spite of the COVID-19 pandemic.

Over the course of four weeks, “SBS Super Concert – 2020 SUPER ON:TACT” will be streamed live every Sunday from September 27 to October 18.

On August 28, SBS announced SEVENTEEN, MONSTA X, ITZY, and MAMAMOO as the first lineup of performers for the upcoming virtual concert series.

Stay tuned for the next lineup of artists, which will be revealed next month! 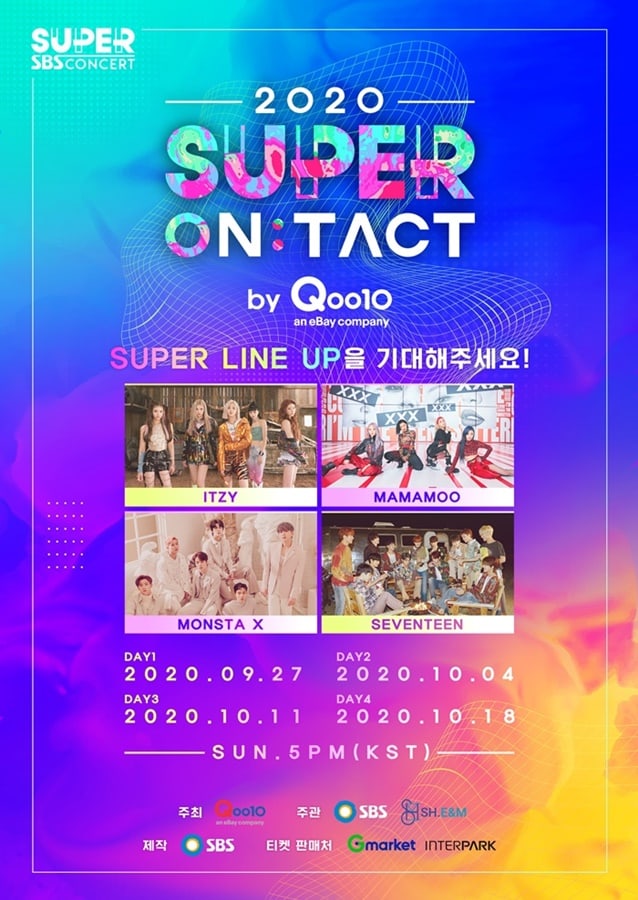