Suzy stars in a short film based on her own novel!

On September 4, a live broadcast was held on the Lancôme YouTube channel for the short film “If My Stuff Is Still at Your Place, We Haven’t Broken Up” (literal title). Actors Suzy and Nam Yoon Soo took part along with Director Kim Ji Woon.

Kim Ji Woon surprised everyone when he revealed that the creator of the original work that the film was based on was Suzy herself. “There’s a medium-length novel that Suzy’s writing in secret,” he said. “I read it and wrote the story based on an interesting part.”

Suzy shared, “There are stories that I’m writing for my own personal satisfaction in my spare time, but when I took on this project I was talking with the director and he chose a story that he liked and adapted it.” She shared her gratitude to the director and said, “It’s such an honor for me.” 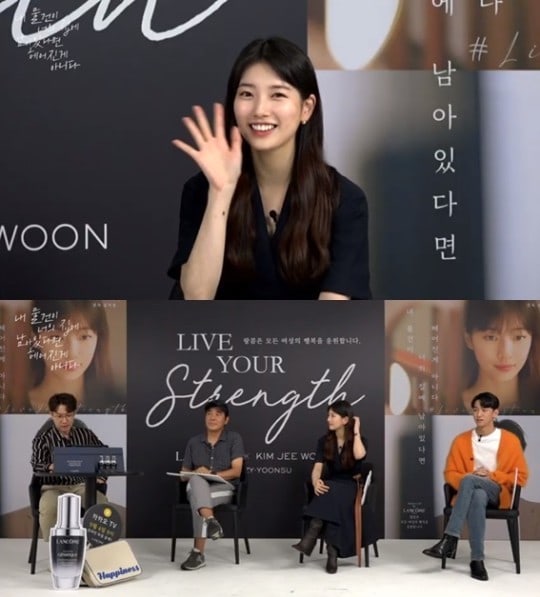 When Suzy was asked how she would describe a “happy woman,” she said, “A woman who focuses on herself.” She added, “It’s not that she doesn’t think about others, it’s that I think a happy woman is one who walks her path at her own speed.”

The short film tells the story of a couple who seemed liked they’d be together forever but end up suddenly breaking up. It’s a tale about growth and happiness as the main character overcomes the many different post-breakup emotions that anyone might experience and makes a new start. It’s part of a project by the makeup brand Lancôme and was released on KakaoTV on September 4.

Watch Suzy in “While You Were Sleeping” below!