On the latest episode of “Ask Us Anything,” Yoon Sang Hyun shared that he used to be jealous of his wife Maybee’s close relationship with Min Kyung Hoon!

During the September 5 episode of the JTBC variety show, the actor appeared as a guest alongside his “18 Again” co-stars Kim Ha Neul and Lee Do Hyun.

Early on in the show, Super Junior‘s Kim Heechul mentioned that Yoon Sang Hyun had expressed some reservations about appearing on “Ask Us Anything” due to a certain cast member. When asked who it was, Yoon Sang Hyun jokingly declared, “I almost didn’t get married because of Min Kyung Hoon.” 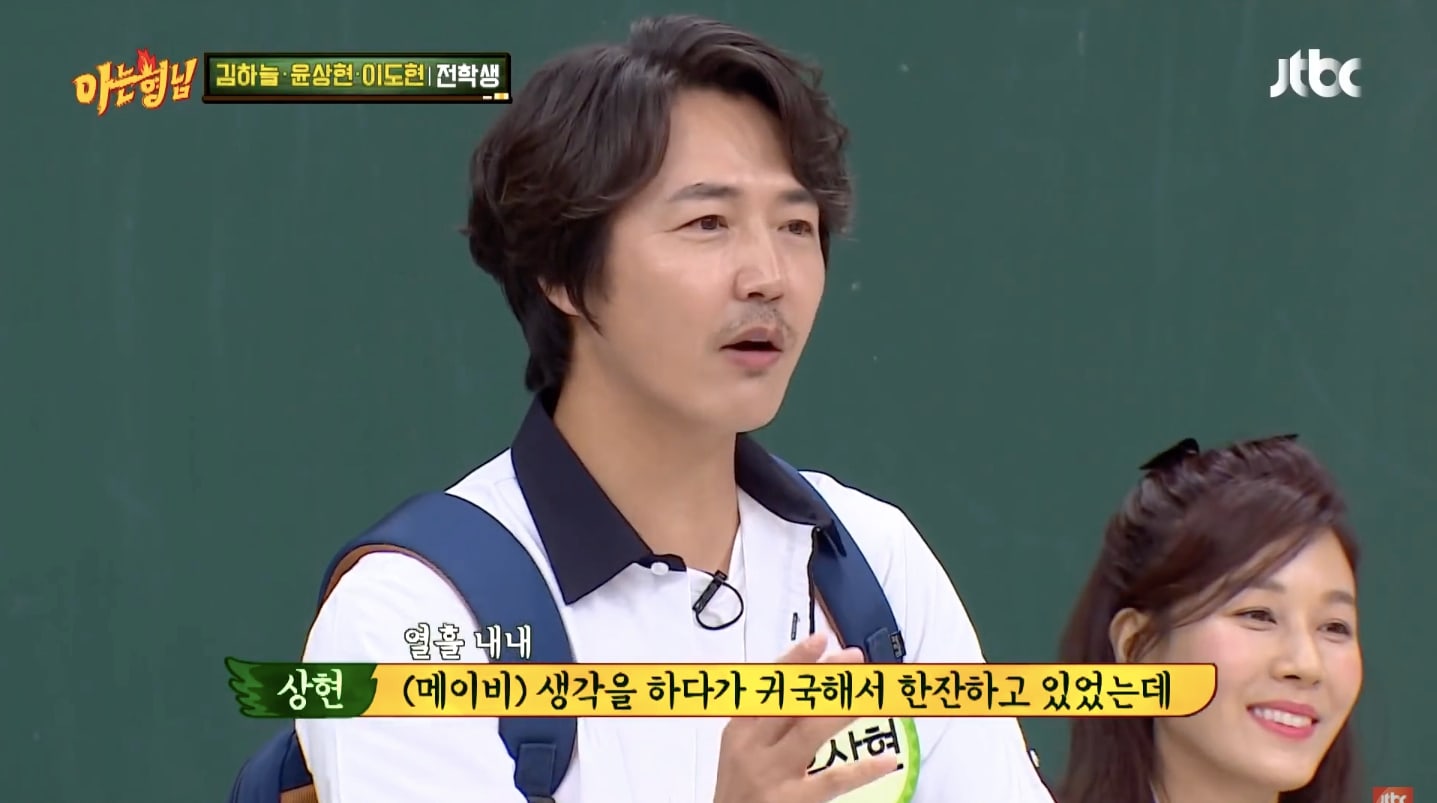 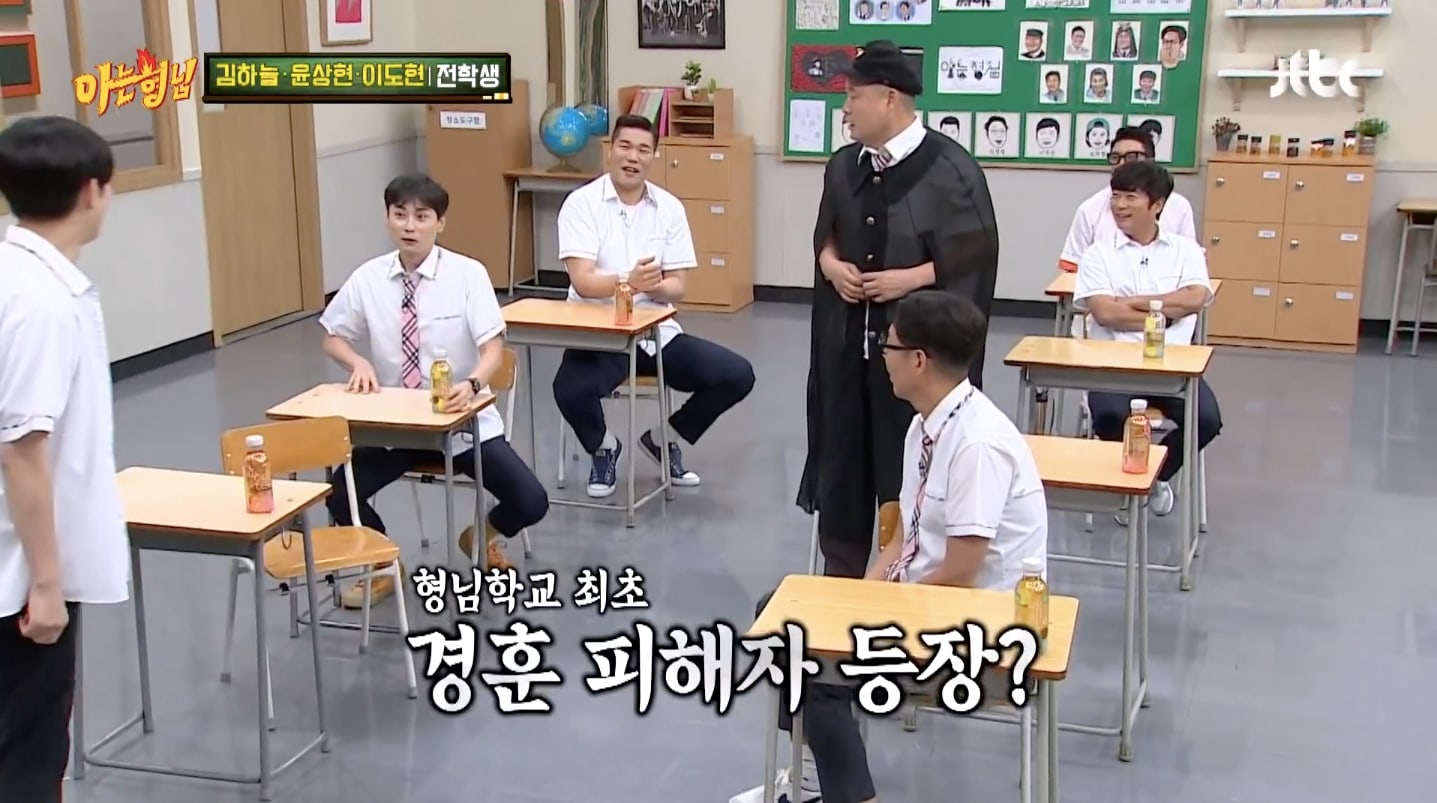 As everyone—including Min Kyung Hoon—reacted with shock at the dramatic statement, Kang Ho Dong asked the singer whether he knew Yoon Sang Hyun’s wife Maybee. Min Kyung Hoon confirmed that he did, explaining that they used to be labelmates at the same agency.

Yoon Sang Hyun then elaborated, “[Back in 2014,] I had to go to Brazil for a shoot. Before I left, I had a small fight with [Maybee].” Explaining that they weren’t married at the time, he continued, “Because of our fight, I began to worry whether I ought to marry this person or not. I was grappling with that question when I went to Brazil, and I kept thinking about it for the 10 days that I was there.”

“When I came back, I was having a drink by myself in the Cheongdam neighborhood,” he went on, “and the more I drank, the more strongly I felt that I needed to call her. So I finally called her at about 3 or 4 in the morning. But I could hear someone singing in the background. It was a voice I’d heard many times before.”

Kang Ho Dong asked, “Who was it?” and Yoon Sang Hyun made everyone crack up by instructing Min Kyung Hoon, “Sing something.” 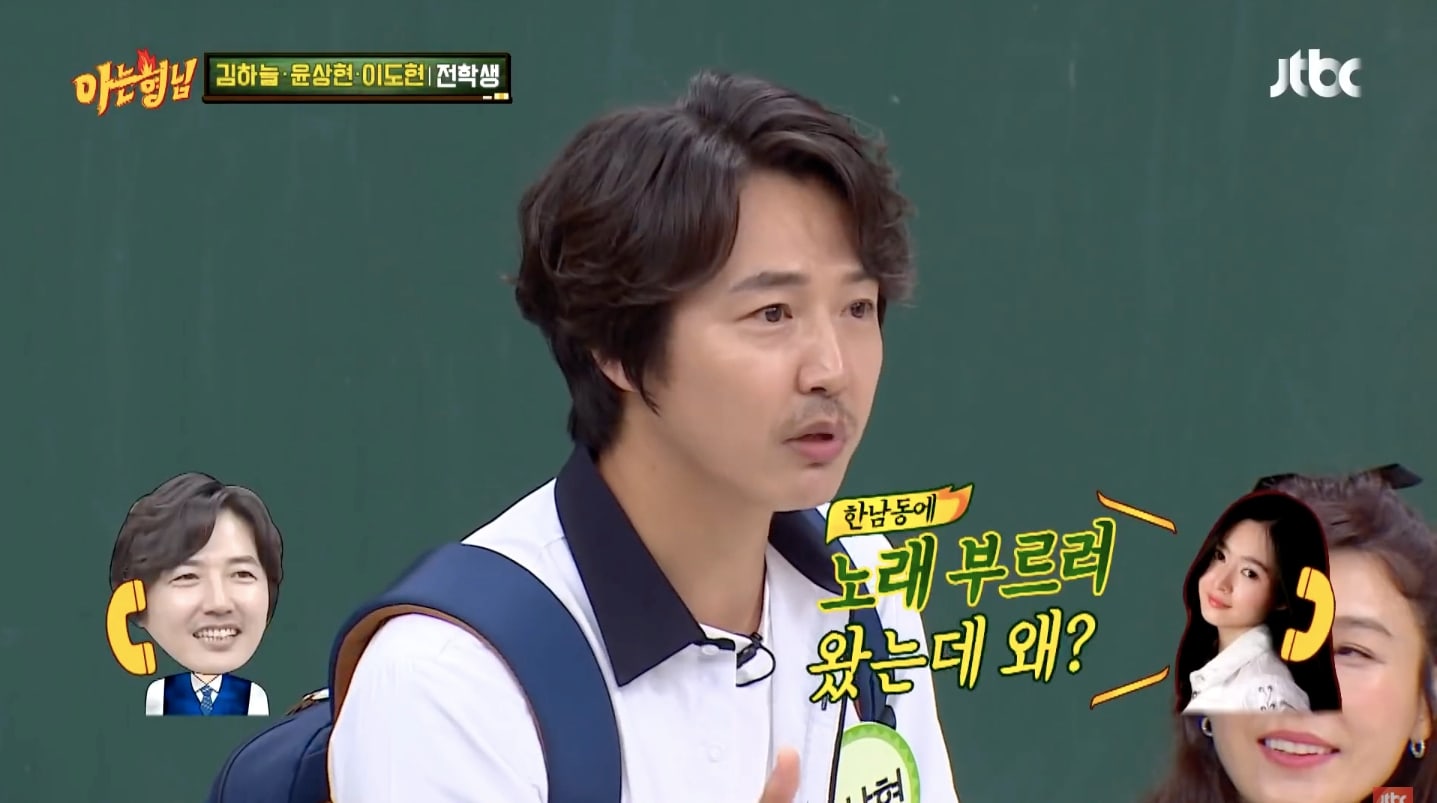 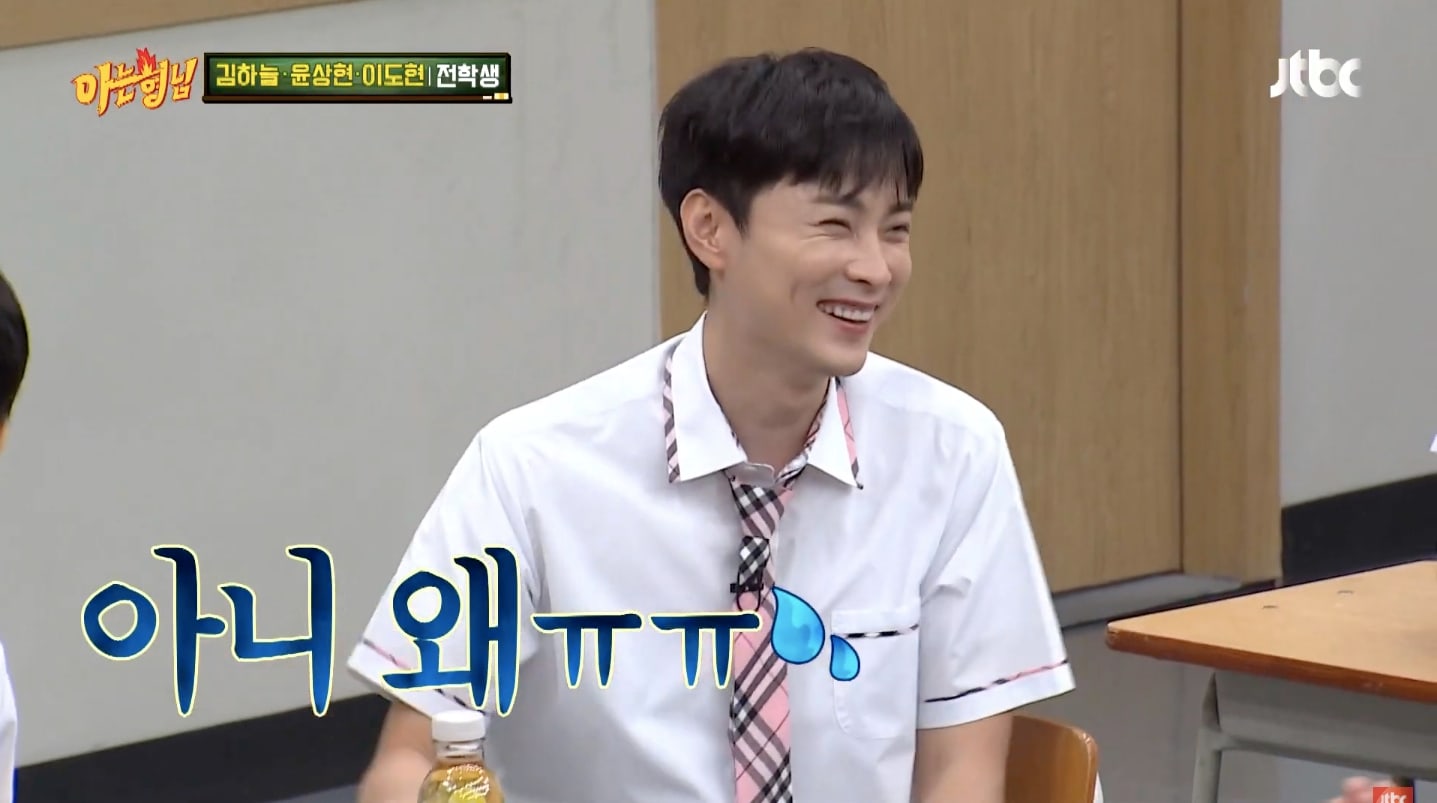 Yoon Sang Hyun explained, “Because I like Kyung Hoon and Buzz’s songs so much, his voice sounded really familiar. I asked who she was with, and she said she was with some women and men, as well as the marketing team from her agency. I wasn’t originally planning on going to see her after calling her, since I have pride. But I ended up asking her where she was and rushing off to see her right away because I was so upset.”

He clarified, “I didn’t know at the time that it was Kyung Hoon,” and Min Kyung Hoon responded with a laugh, “So you were coming to beat me up?” Yoon Sang Hyun replied, “I wanted to go see for myself who she was with. I heard a man’s voice, and she told me they’d been drinking and were at a karaoke bar.”

Yoon Sang Hyun then pointed out that Min Kyung Hoon lived right across the street from the karaoke bar in question, leading Kim Heechul to exclaim in surprise, “How do you know where he lived?” The actor made everyone burst out laughing by replying, “I interrogated my wife about every little detail.”

Yoon Sang Hyun went on to recall that when his wife told him it was Buzz’s Min Kyung Hoon she’d been hanging out with, he immediately began questioning what kind of relationship they had, because she’d never mentioned him in conversation before. “So I looked him up,” he confessed, “and he turned out to be handsome. And he was a good singer. So I started getting really nervous.”

“[Maybee] told me that they were just labelmates,” he continued, “but I yelled, ‘Then why did you stay out drinking and singing together until this hour?’ Then, because I was so angry at Maybee, I realized that I must really like her. Actually, we got married faster because of Min Kyung Hoon.”

Lee Soo Geun commented, “So you should actually be grateful to him!” Yoon Sang Hyun then caused another uproar by retorting, “But even after we got married, he kept calling her.” 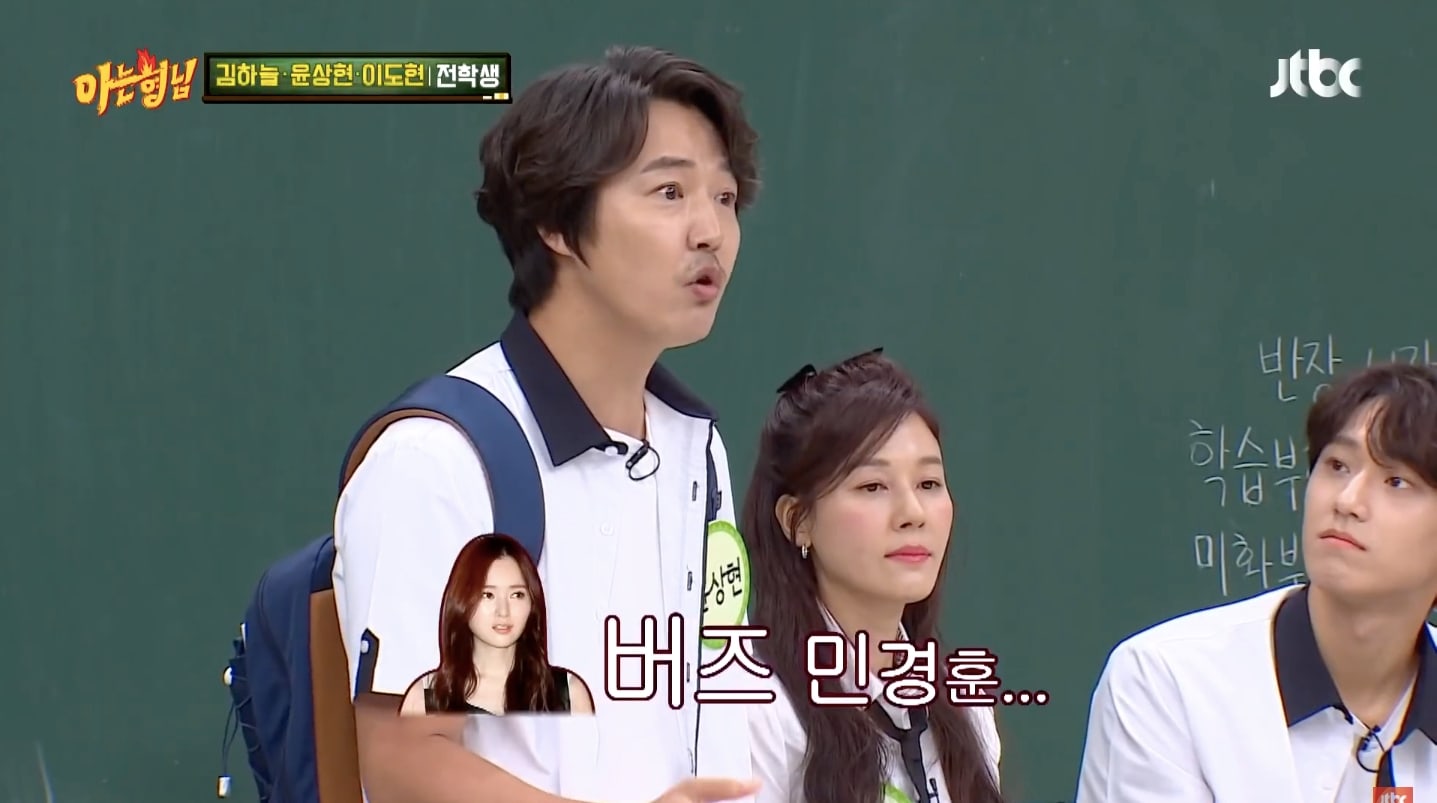 Although Min Kyung Hoon initially denied it out of fear, he later confessed with a laugh, “Actually, I did call her. I just said I didn’t because [Yoon Sang Hyun] was so angry. I did call her a few times.”

The singer went on to clarify, “But the only reason I called Maybee was because of song lyrics. Since she’s really good at writing lyrics, I was asking her to write some lyrics for a song I’d composed.”

Min Kyung Hoon added, “But back when you were dating Maybee, I didn’t know she had a boyfriend.” Yoon Sang Hyun reacted with shock, exclaiming, “So Maybee never told you that she was dating me?” and Min Kyung Hoon confirmed, “She never told me.”

He then told his own side of the fateful karaoke story, recalling, “We were competing to see who could get the highest karaoke machine score. During the final round, [Maybee] suddenly said she had to leave and rushed out. That’s when I found out [she had a boyfriend]. She just hurried out without explaining. I guess it was because [Yoon Sang Hyun] was on his way to beat me up.” 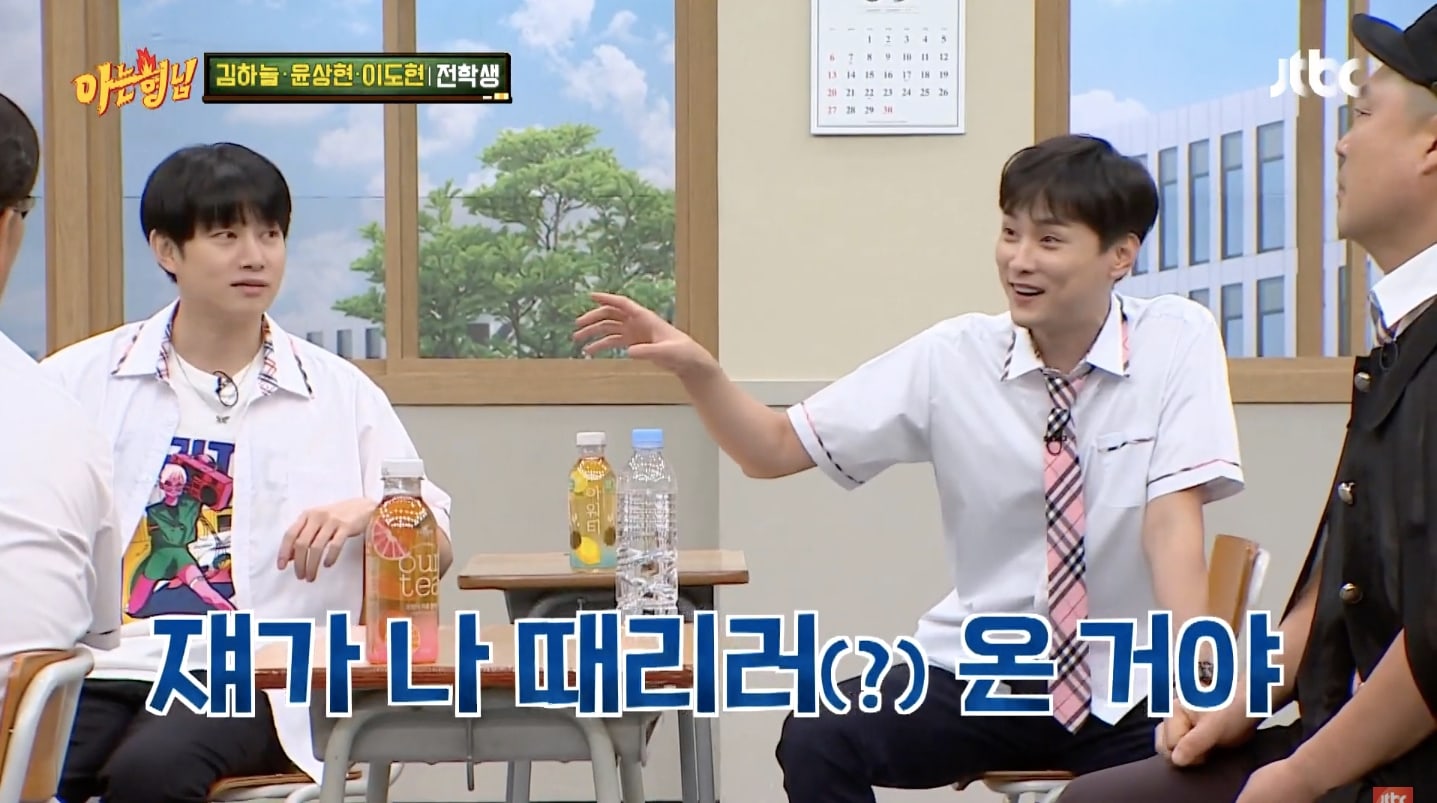 Yoon Sang Hyun added that he had recently gotten upset after seeing Min Kyung Hoon in a burger commercial, and Kang Ho Dong pointed out, “But, Sang Hyun, the incident you’re talking about is from about six years ago. This commercial only started airing about a year ago.” Seo Jang Hoon chimed in, “That means you still had hard feelings up until then.”

However, the actor revealed, “There was a recent incident that made me realize I didn’t need to worry about Min Kyung Hoon. When we started appearing on ‘Same Bed Different Dreams 2 – You Are My Destiny,’ he called [Maybee] and asked, ‘So you’re appearing on “Same Bed Different Dreams” and also “You Are My Destiny”? You’re on two shows?'” He jokingly continued, “So I realized, ‘Oh, so he’s not too bright.'”

As everyone cracked up, Yoon Sang Hyun went on, “I had thought that Min Kyung Hoon was really smart. I started to regret all the time I’d wasted worrying about him.” 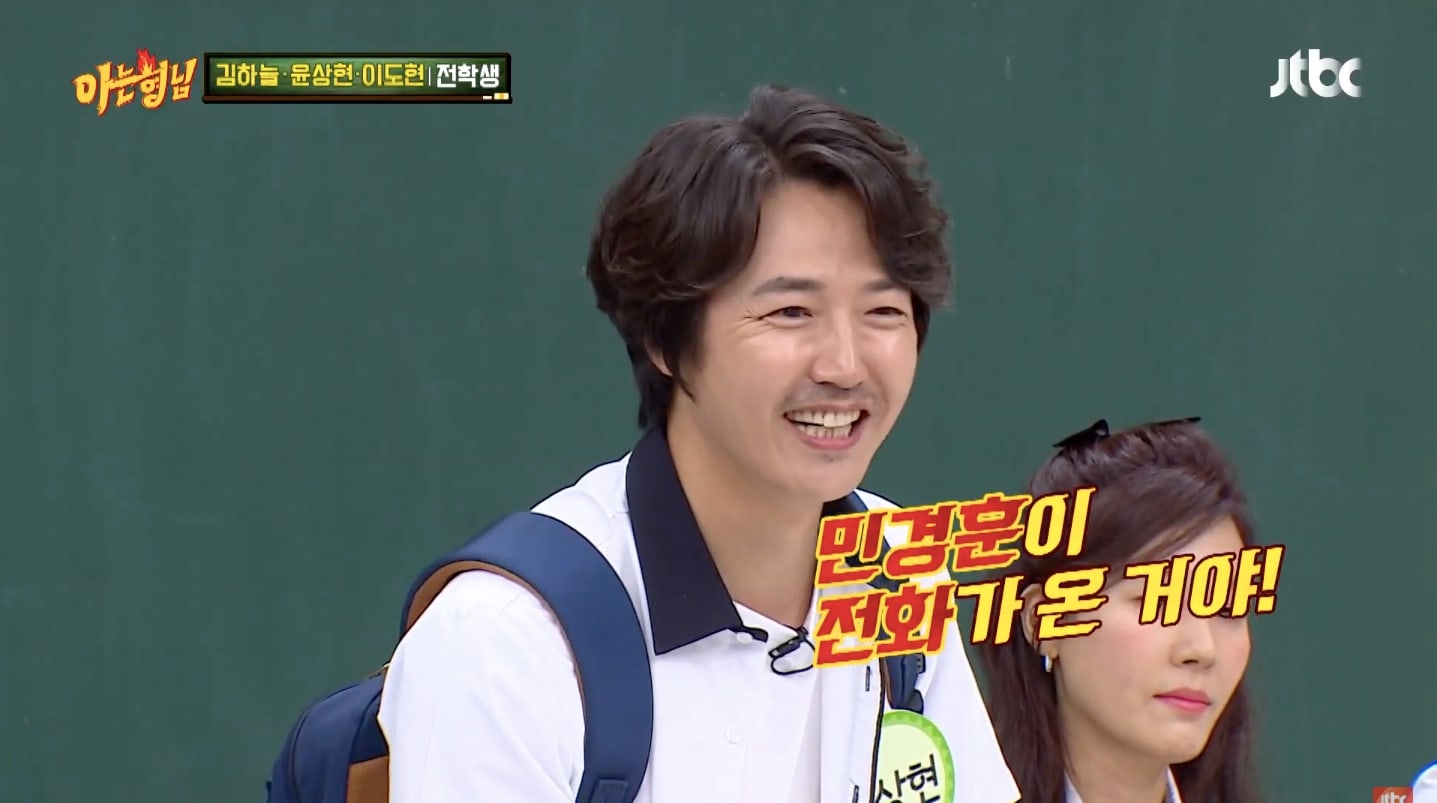 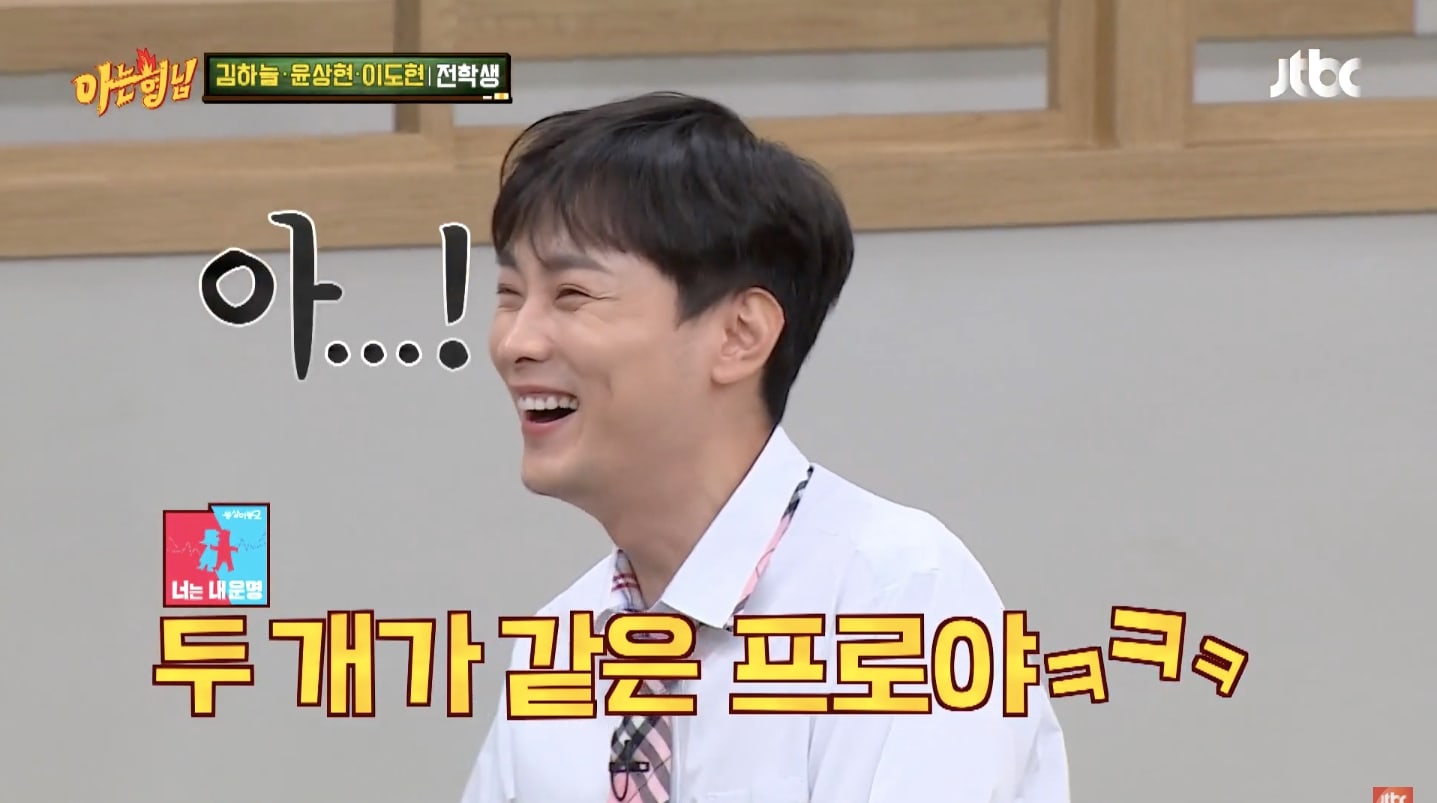