On September 10, BTS made a special appearance on the evening news program “KBS News 9”!

BTS was on the news program to talk about the success of their latest single, “Dynamite,” which recently topped the Billboard Hot 100 for the second consecutive week. Their first No. 1 on the chart made history by being the first time that an all-South Korean group had topped the Billboard Hot 100, with their recent second No. 1 extending the record to be the first time an all-South Korean act had topped the chart for two weeks. 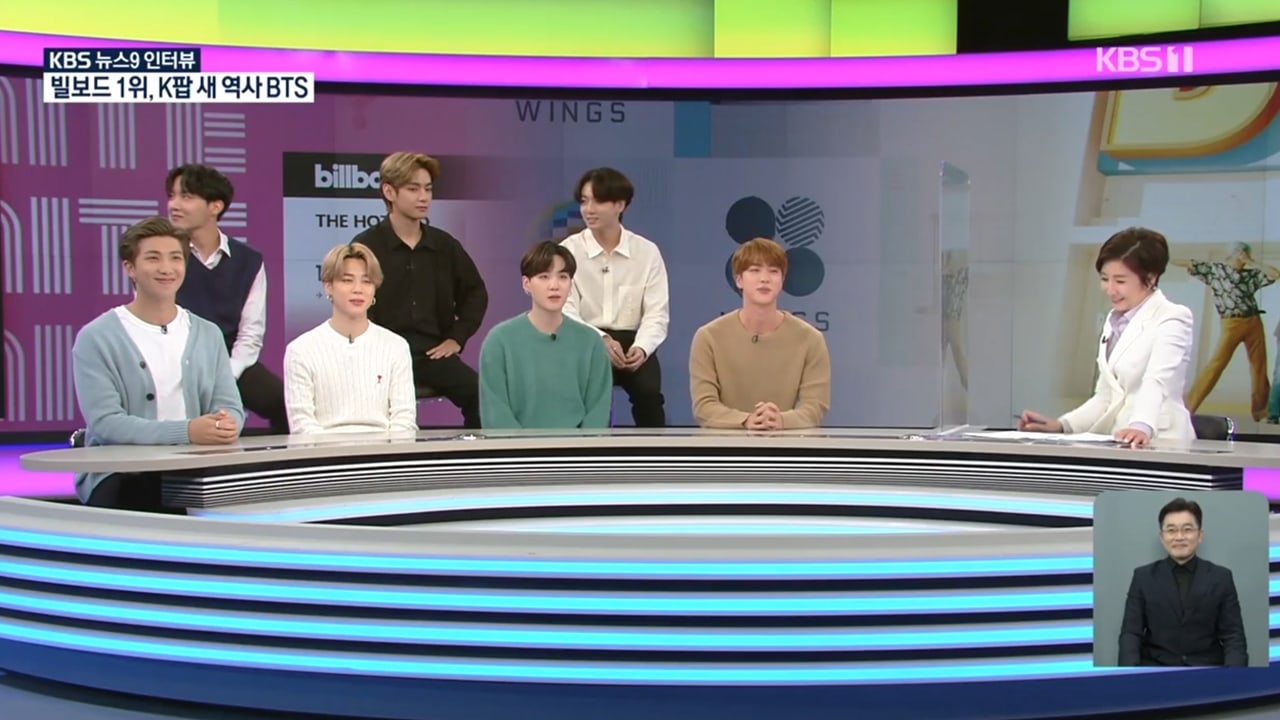 Asked about the explosive success of “Dynamite,” Suga said, “The situation regarding COVID-19 is bad overseas as well, so our main focus was wanting to give fans a little bit of strength. We think that these good results are because the fans really liked it.”

RM added, “There are a lot of different ways that people overcome their depression and sadness in a difficult situation, but we chose a standard method. We felt that people needed a sense of happiness and hope that the familiar disco pop genre brings.”

Asked if they felt their status as “world stars,” V replied, “I feel it more than I did before. My family’s acquaintances tell us that they are ARMYs now. My friends’ acquaintances say the same thing.” J-Hope quipped, “We got a lot of cheers when we came into the newsroom today.”

The group also talked about their difficult periods as trainees. Jin said, “There was a time when a banana went bad in the dorm and we had to catch fruit flies with a vacuum cleaner. There was also a time when I ate nothing but chicken breasts. There used to be a limit on what we could eat, but now I can eat whatever I want. I can even eat two pieces of steak if I want.”

Jimin said, “I think that our mindset is different from the past. If we were impatient and resolved at all costs in the past, we are a bit more relaxed now.” Jungkook added, “But our attitude toward our fans and our music hasn’t changed.”

BTS touched on their contract renewal and their teamwork as a group. Jin said, “There is no formal reserve between us. None of us tried to enforce a strong sense of discipline. I think that’s why we have great teamwork. We always have meetings and share our own opinions.” J-Hope added, “We were able to come this far because we respect each other and are considerate of each other.”

RM said, “We’re on the same boat but looking in different directions. The seven of us are different because we grew up in different backgrounds and like different things. It’s fine as long as we recognize we’re in the same boat. Like family, like partners, I think that keeping an appropriate distance and a sense of mutual respect and trust are the keys to good teamwork.”

About their next album, Jimin said, “We have songs that are as good as and even better than ‘Dynamite,’ so I hope that fans will look forward to it. This is a bit ambitious, but I hope that the entire album can get into the Hot 100 this time.” Jungkook added, “The members participated a lot in the production.”

Suga said in response to a question about the Grammys, “I hope we can be nominated for an award and that we can have a solo performance there. I don’t know if I can say as much, but if we can get nominated… I really would like it.” 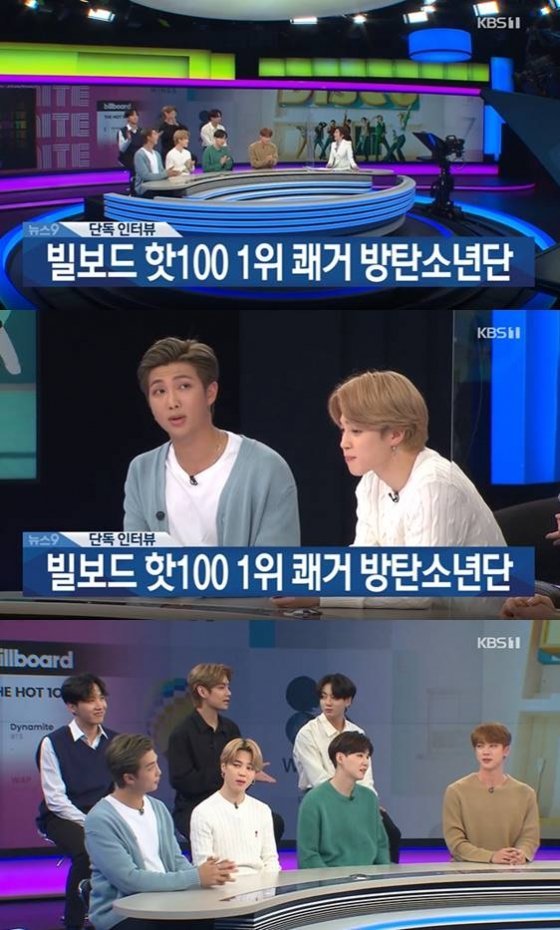 At one point, J-Hope was asked about BTS’s song “Ma City,” which references “5.18.” “5.18” is a term that refers to the May 18 Democratic Uprising in 1980. This was a popular pro-democratization uprising in the city of Gwangju that is remembered for the government’s brutal military crackdown in response. Gwangju is also J-Hope’s hometown. He said, “I think that as an artist it is an honor to be able to tell the stories I want to tell through music. 5.18 is an important part of history that should not be forgotten, so I wanted to be able to unravel that story through music.”

The group shared their thoughts on communicating with their fans amidst the COVID-19 pandemic. “We are grateful to live in an age where it is possible to communicate via the internet and social media. When we got No. 1 on the Billboard Hot 100, the first people we wanted to share our feelings with were ARMYs.” Earlier in the interview, the group had also shared, “When something good like this happens, we want to meet fans directly and hug and cry and laugh with them, but because the current situation is not good, we felt a bit of regret. However, it is an honor to be able to appear on the news and hopefully the fans will like it as well.”

BTS was asked if they could create a “challenge” specially for youth who are growing up in the COVID-19 crisis. V said, “This is just a personal thought, but there’s a lot of things that people can’t do because of COVID-19. I think that it would be nice to write or express the first thing we want to do after COVID-19 ends. It’s like a ‘dream challenge.'”

On this date, BTS also performed on the NBC Today Citi Music Series.

BTS
KBS News 9
How does this article make you feel?