MAMAMOO’s Hwasa was the latest to take on the “Hidden Singer” challenge on the September 11 episode.

“Hidden Singer” is a variety show on JTBC in which a famous singer competes against contestants who attempt to do a perfect impersonation of the singer’s voice. The impersonators and the singer perform behind curtains as the audience tries to guess which are the “false” stars.

Hwasa said, “When I first got a casting offer for the show, I thought it was as a panelist. I felt a lot of pressure about going on as the singer. I asked my agency CEO for advice and he said, ‘This is a place where singers gain a lot of strength. Think of it as an honor and have fun.”

Song Eun Yi described Hwasa as a trendsetter and said, “She’s like Lee Hyori in that everything she does becomes a hot topic.” Kim Jong Min said, “I think Hwasa is like a gem in the music industry. I was shocked when I realized she was so young. I like the song ‘Twit’ but my face gets hot whenever I listen to it. [In Korean, the title of the song ‘Twit’ literally means ‘fool,’ which is a common nickname for Kim Jong Min on variety shows.]”

The first song was Hwasa’s duet song with Loco, “Don’t.” She said, “It’s a song that I had fun making with Woogie and Loco. Loco is in the military now.” Hwasa was able to win the round after the audience identified her voice correctly.

One of the impersonators turned out to be Yeo Soo Jin, who is called the “army president Hwasa.” She said, “I’ve sung in a lot of different places. I sang MAMAMOO’s songs while performing for the army and got that nickname.”

In Round 2, the contestants and Hwasa sang her solo track “Twit.” Hwasa said, “Composer Park Woo Sang is good at writing a song that captures how I feel after I share an idea with him.” After the performance, she said, “I had a lot of confidence going into this round, but while I was singing, I suddenly started to feel like I was imitating myself. Everyone sounded so similar.”

Another impersonator was revealed to be Suk Ji Soo, who had ranked in the Top 6 in the 2016 season of SBS’s “K-Pop Star.” She said, “At the time, I was still young, and there were a lot of hate comments about my appearance. Every time I sang, I would feel myself getting dejected. I thought that becoming a singer wasn’t the right path for me, but last year I heard Hwasa say at a concert, ‘If I don’t fit the beauty standard of this generation, then I will become a new standard.’ I think that she is a great role model for women. I believed in what she said and am heading toward my dreams. Instead of despairing, I will also set a new beauty standard.”

Hwasa said, “I was the same when I was young. I was able to become stronger, but the scars are still there. I can’t give any great comfort, but I want to cheer you on and help you. I am sincerely cheering you on.” 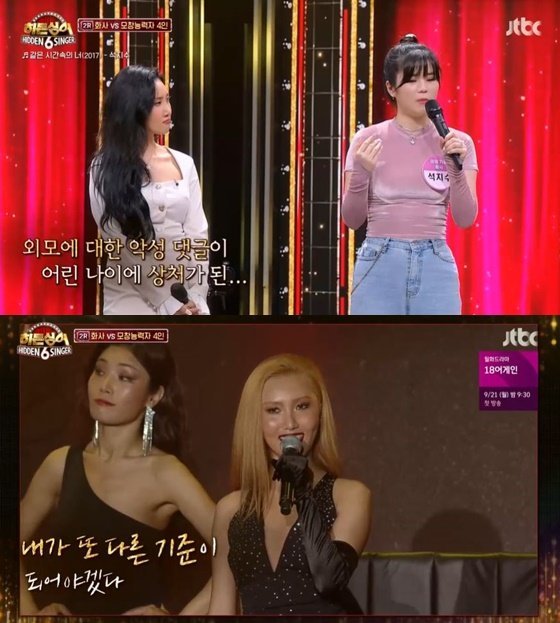 In the third round, Hwasa and the contestants sang MAMAMOO’s “Decalcomanie,” and in the fourth round, they sang her newest solo track, “Maria.” At the end of the episode, she became the second original singer after Kim Yeon Ja to win the “Hidden Singer” challenge.

MAMAMOO
Hwasa
Hidden Singer 6
How does this article make you feel?