On the September 12 episode of JTBC’s “Ask Us Anything,” Girls’ Generation’s Seohyun and Go Kyung Pyo appeared as guests.

The two actors are promoting their new drama on JTBC, “Private Life.” The drama is about con artists who use the tricks of their trade in order to expose the nation’s major “private life.”

During the episode, the “Ask Us Anything” cast began to tease them about their “relationship.” Lee Soo Geun said, “This is a high-class report, but I heard that you two are dating. I heard that you’re already living together in the Seohyeon neighborhood in the Bundang district.” 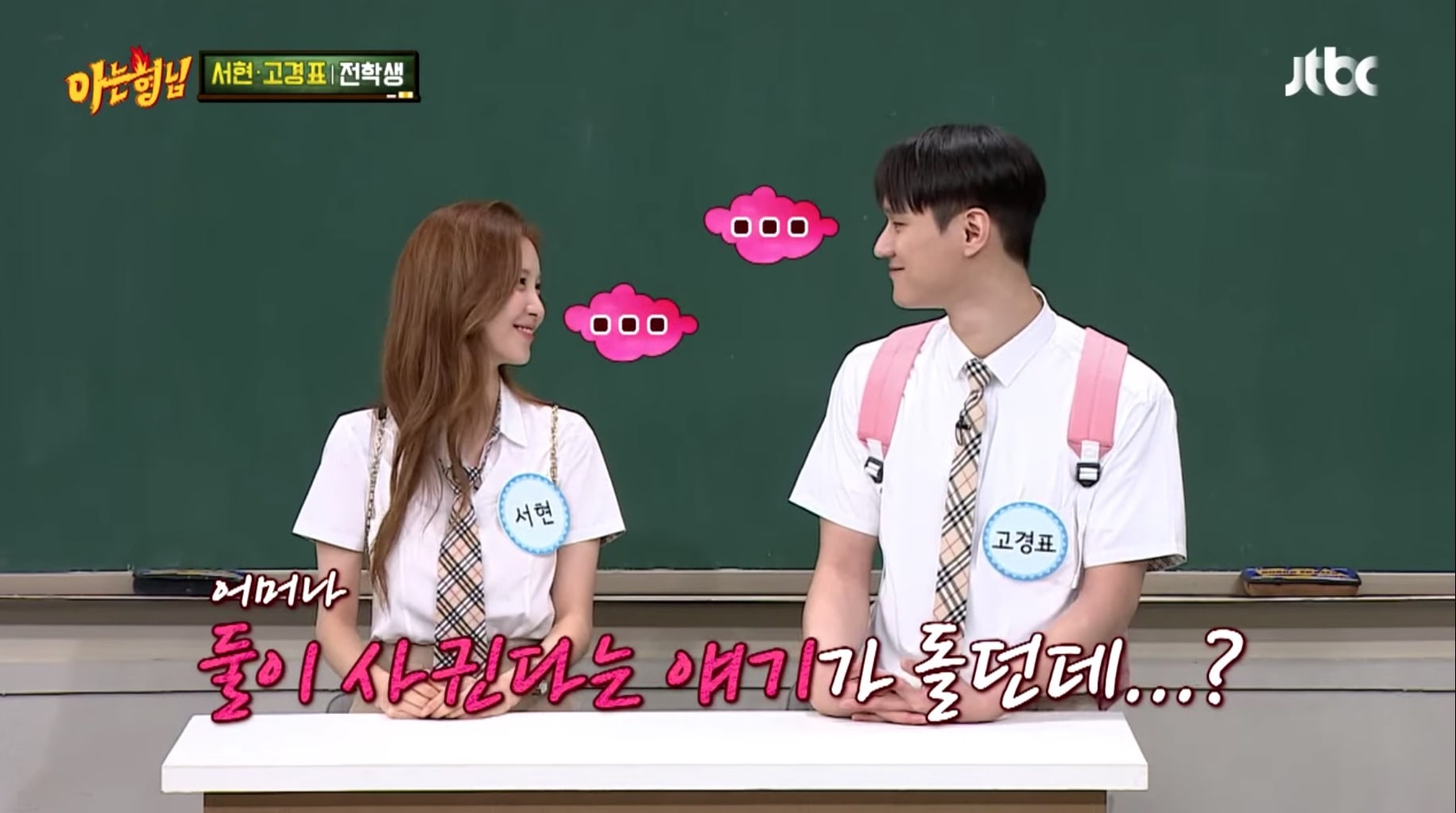 Kang Ho Dong chimed in, “I heard they were living in Pangyo!” Pangyo is a planned city in Seongnam, Gyeonggi Province. It also refers to the subway station and the neighborhood of the same name. 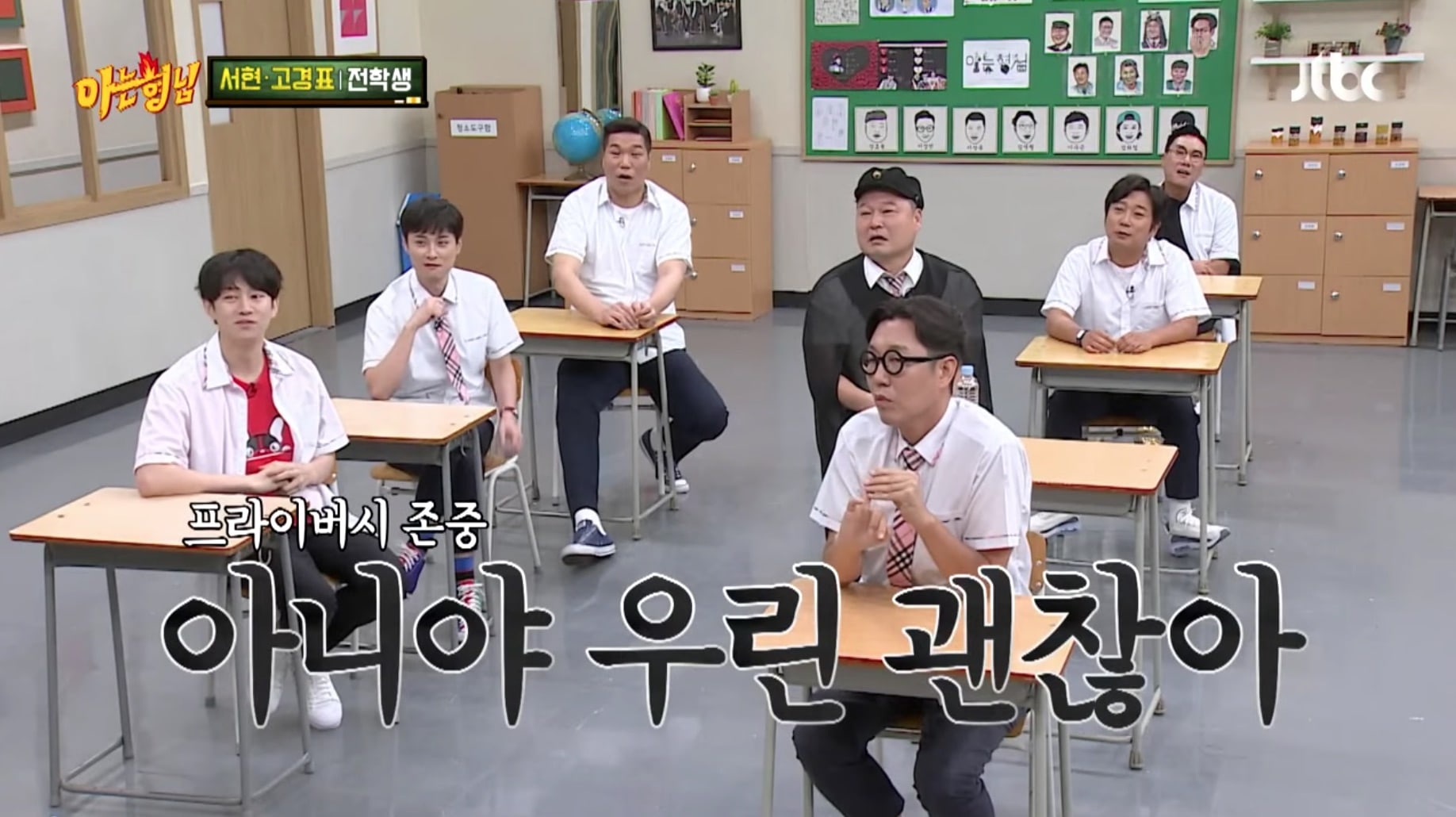 Seohyun insisted, “I’m going to talk about it! I want to talk about it, so what’s the issue?” Kim Heechul observed, “You used to be so shy,” and she replied, “While filming this drama, I’ve become more shameless.”

Min Kyung Hoon asked, “Newlyweds are one thing, but why is their nickname Pangyo newlyweds?” Seo Jang Hoon joked, “They must have been spotted in Pangyo.” Lee Soo Geun commented, “I think Go Kyung Pyo likes imagining this is real. His face looks so happy right now.” 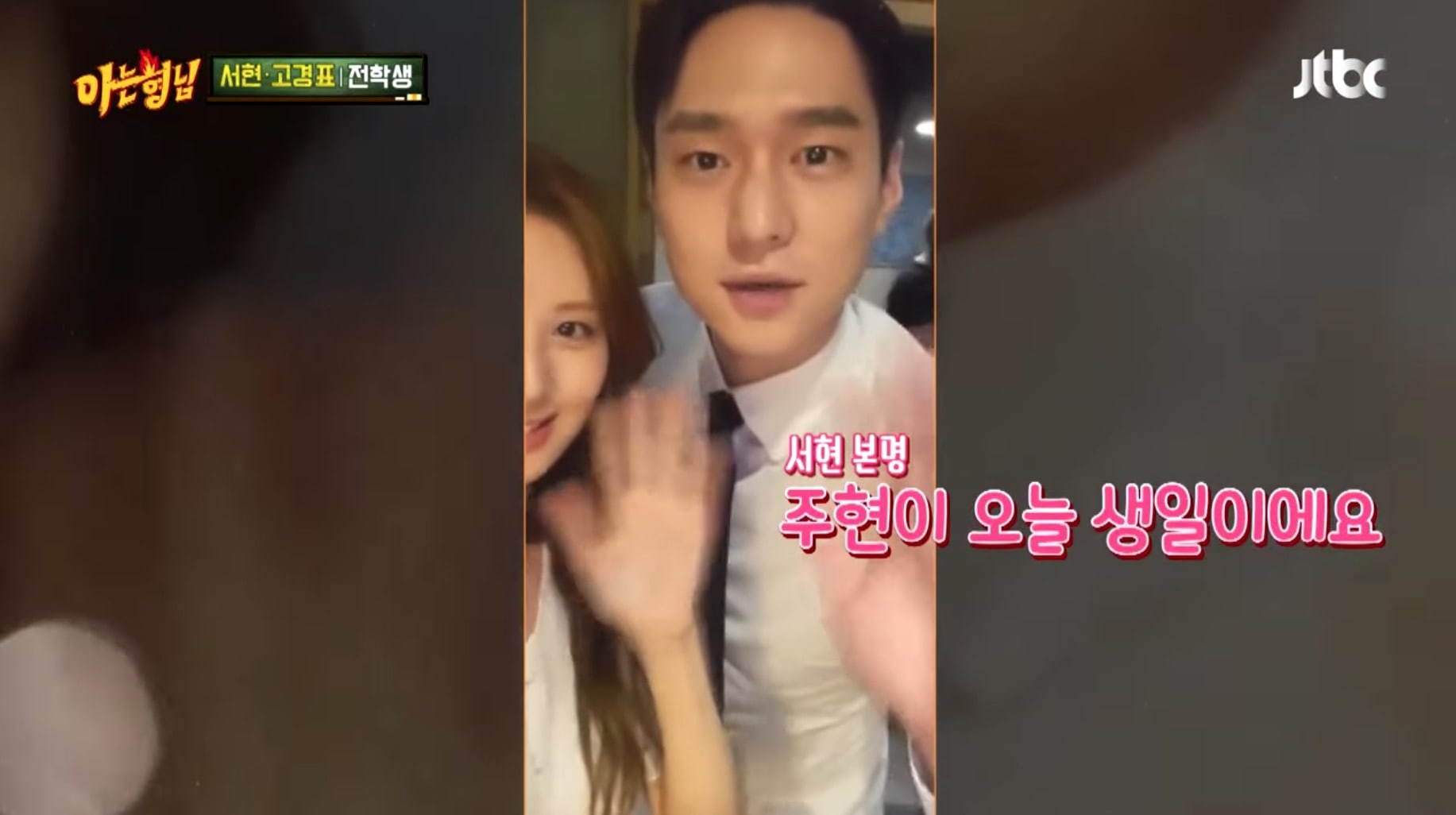 Seohyun explained, “I didn’t know about this nickname until the Girls’ Generation members talked about it in the group chat. It turns out it’s from an Instagram Live broadcast I did on set.” In the video, Seohyun and Go Kyung Pyo are both dressed semi-formally and she asks him to say hi to the camera. He waves and says, “It’s Joo Hyun [Seohyun’s real name]’s birthday.”

Seohyun continued, “Fans saw the video and thought we had the vibe of newlyweds who are living in Pangyo. It’s become our nickname.” Seo Jang Hoon explained, “There are a lot of young couples who live in Pangyo now.” 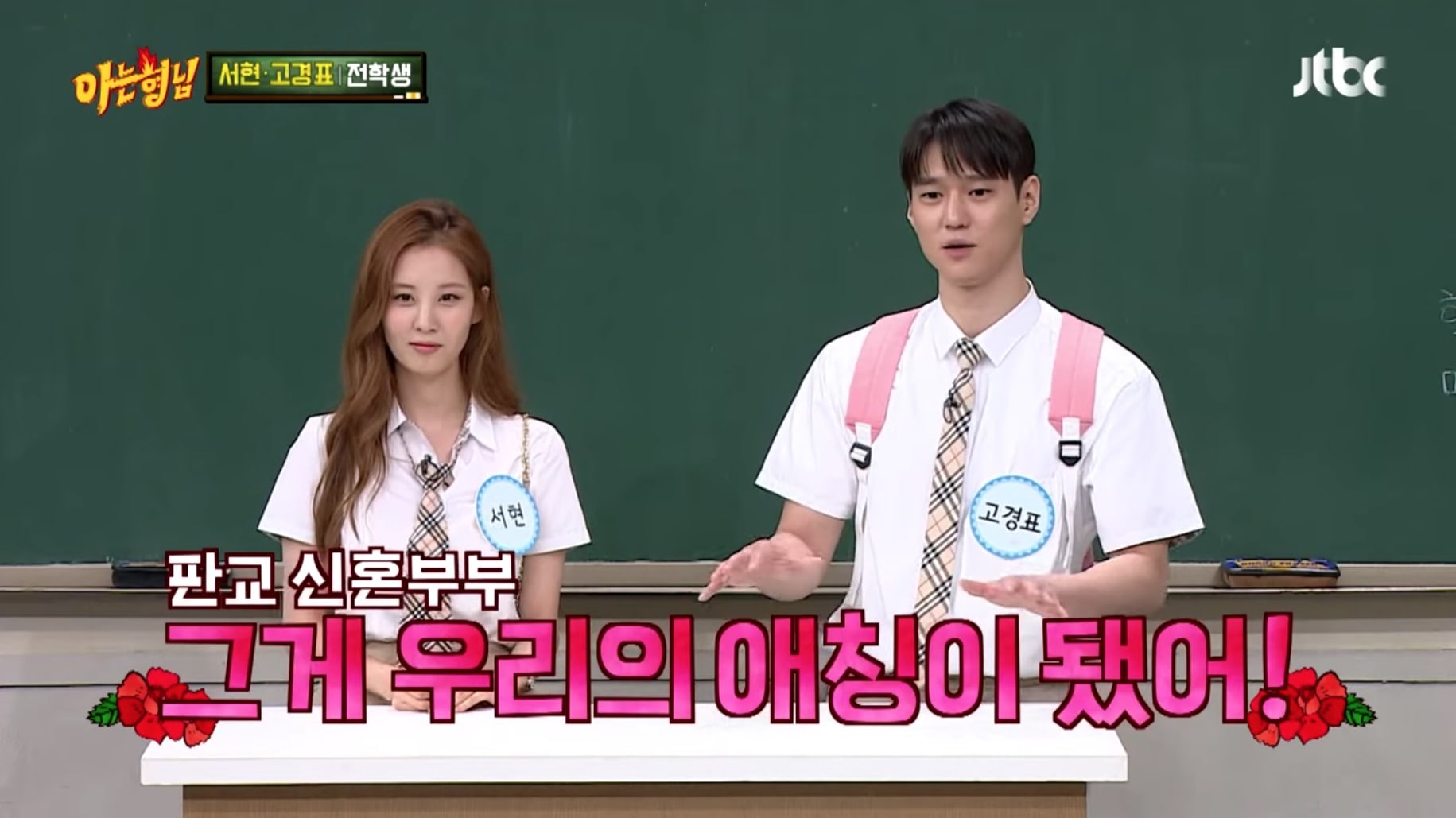 Later in the episode, Seohyun talked about what Go Kyung Pyo was like as a co-star. “I’m really grateful to have him as a partner,” she said. “On set, he’s really…” The cast then began to make fun of Go Kyung Pyo for looking so happy at the praise. She continued, “He’s always wearing suits on set for his character, but one day I saw him in a Hawaiian-style shirt. I kept seeing him wearing shirts like that, and I was wondering what con scene he was filming, but it turned out that was his personal clothes.”

Lee Soo Geun quipped, “He’s imagining what it would be like on your honeymoon.” 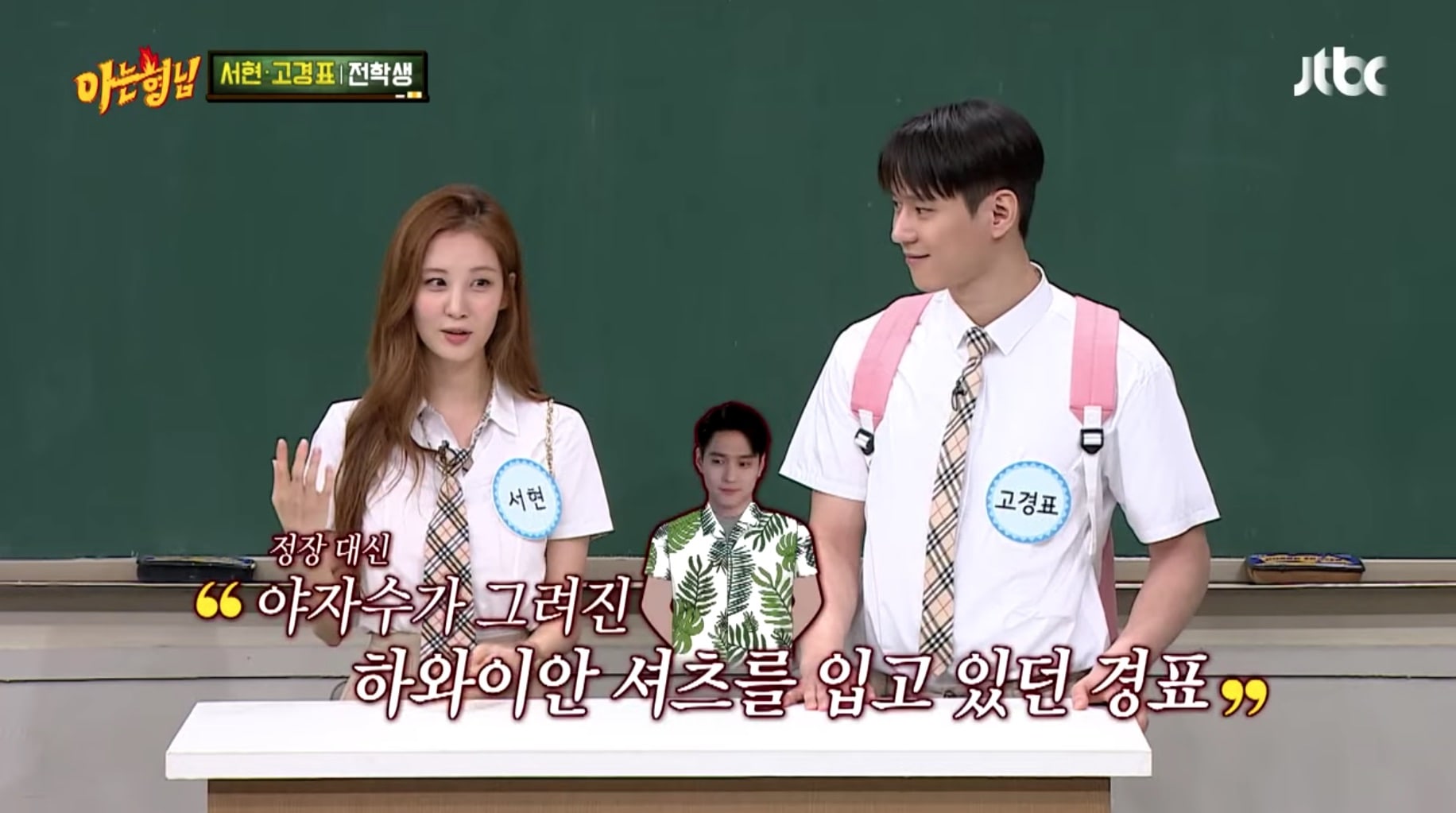