On the latest episode of “Master in the House,” the cast underwent military training from a UDT (Underwater Demolition Team) and SEAL (Sea, Air, and Land) soldier!

Before cast members Lee Seung Gi, Kim Dong Hyun, Yang Se Hyung, Shin Sung Rok, and ASTRO’s Cha Eun Woo met this week’s master, they received a call from soccer player Lee Dong Gook, who was originally supposed to film with them that day. The producers explained that the soccer star had initially been scheduled to be their master for the day, but that he’d had to cancel due to unavoidable circumstances.

The cast excitedly greeted Lee Dong Gook and his kids, and they all expressed disappointment that they couldn’t film together that day. Lee Dong Gook explained that since the K League (South Korea’s professional football league) was currently running matches without an audience, it would have been difficult to invite them to the field.

He also showed off how much his kids have grown and explained the funny and athletic ways they play in their living room, inviting the cast to come over next time to train their energy and stamina.

Afterwards, the cast met their new master Lee Geun (also known as Ken Rhee), a well-known UDT/SEAL soldier who began instructing the members right after his dramatic entrance. The cast were told to change in only 30 seconds and then began basic training. 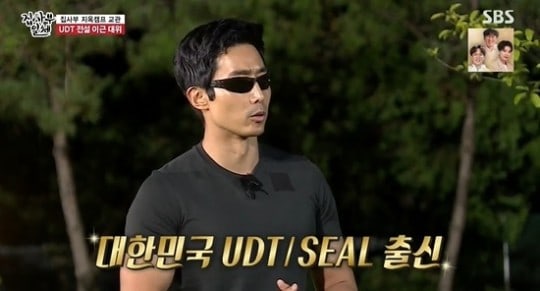 When asked why he decided to appear on “Master in the House,” Lee Geun answered, “Kim Dong Hyun had said that he likes hardships and challenges.” Referring to his YouTube series that takes its name from MBC’s “Real Men,” Lee Geun added, “[Kim Dong Hyun] also applied to ‘Fake Men.'”

In response to his fellow cast members’ complaints, Kim Dong Hyun commented, “That’s just something I said about myself.” He hilariously added, “However, if you excluded everyone and just tortured me, that’d be a bit much, right?”

The cast also discussed a popular phrase from “Fake Men,” in which Lee Geun asks soldiers, “Do you have a personality problem?” Lee Seung Gi commented that he had never heard that phrase while he was in the military, and Lee Geun explained, “I had no idea it’d become a catchphrase. I was very serious during training, but even I was surprised after watching the broadcast.”

As a Korean who grew up in the United States, Lee Geun shared that his original intention was to ask, “Do you have an attitude problem?” However, the way he directly translated this into Korean is slightly unnatural and can be translated back into English as “Do you have a personality problem?” explaining why it’s a little awkward to hear in Korean.

Their official training began with the deep tank, which was a tub filled with ice water. Lee Geun asked the cast if there was anyone courageous enough to enter. While everyone else avoided eye contact, Lee Seung Gi volunteered himself.

As Lee Seung Gi sat shivering in the ice water, Lee Geun asked, “What is the meaning of ‘Master in the House?'” Lee Seung Gi answered, “One team.” Addressing the rest of the cast, Lee Geun then exclaimed, “So why are you standing still? You’re all individualists,” prompting the cast to signify their unity by all experiencing the deep tank together.

For the following training sessions, the deep tanks were used as punishment. When Yang Se Hyung was counting their reps wrong, he initially blamed it on Kim Dong Hyun, but felt guilty and ultimately jumped into the deep tank himself. Much to Yang Se Hyung’s dismay, Lee Seung Gi also made a deal with Lee Geun, allowing the team to do 10 less reps if Yang Se Hyung stayed in the tank while they completed the remaining 10 reps.

To continue with their teamwork training, Lee Geun introduced the buddy carry. He explained, “During an operation, what are you going to do if your team member has suffered an injury? We do not leave our team behind. Even if they’ve died, you must take them with you.” As a demonstration, he carried Lee Seung Gi with one hand, even showing that he can use his gun with his remaining hand while on the move.

Watch the cast’s hilarious solutions to the buddy carry below!

Watch “Master in the House” with English subtitles here: