BTS sat down for an interview on the radio show “Bae Chul Soo’s Music Camp” and talked about their latest single “Dynamite,” upcoming album, and more!

“Dynamite” is BTS’s English-language single that came out on August 21. It swept the charts in Korea and around the world, and it’s even taken No. 1 on Billboard’s Hot 100 for two weeks in a row.

During their September 14 interview on the MBC FM4U radio show, Suga said that while they’d thought “Dynamite” might reach No. 1 on the Hot 100 if they were lucky, they had not anticipated that the song would top the chart for a second week. He shared that they received a call from Big Hit founder Bang Si Hyuk right away, and RM added that Bang Si Hyuk had been almost crying.

Jin said, “He asked if we were all there, and when we said we were, he yelled, ‘Yeah!'” The members added that he’d told them what an amazing achievement it was. 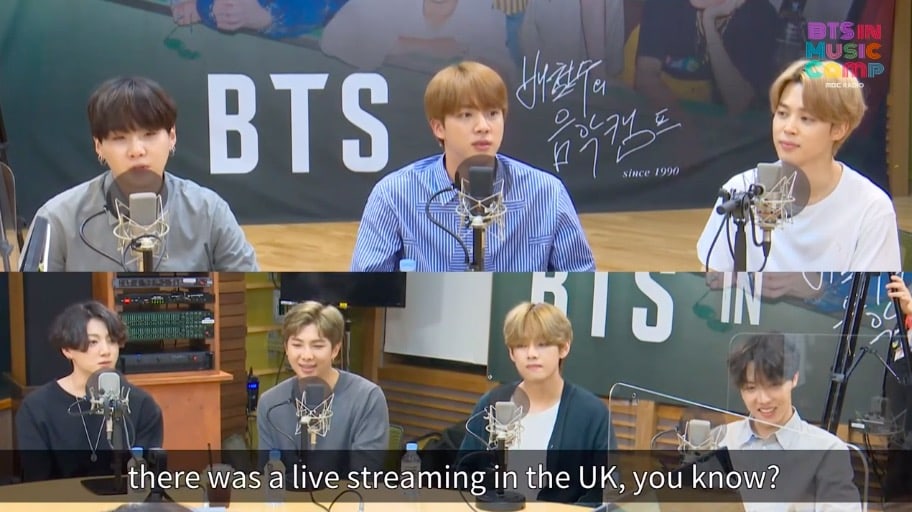 Host Bae Chul Soo expressed his gratitude to BTS, commenting, “I’ve been announcing the Billboard Hot 100 chart every week for the past 30 years, since 1990. I’ve become quite old and I’m close to retirement, but I was able to announce as a DJ that one of our artists topped the Hot 100, so now there’s nothing else I could want.” RM shared that they felt deeply moved.

The DJ went on to say that he did have one more thing that he wanted, mentioning that he’s been commentating the Grammy Awards for 20 years and saying he plans to commentate one more time if the group gets nominated. BTS asked him to continue to commentate, and RM mentioned that the members and Bang Si Hyuk are members of the Recording Academy.

When talking about their next album plans, Suga said, “It’s coming out this year. There’s not much time left.” Jimin said, “We’re almost done working on it. I think it will come out around the end of the year.” He added, “This is exclusive information but the music’s a bit better than ‘Dynamite.'” V joked, “To give a surprising spoiler, the songs are about three to four minutes long.” 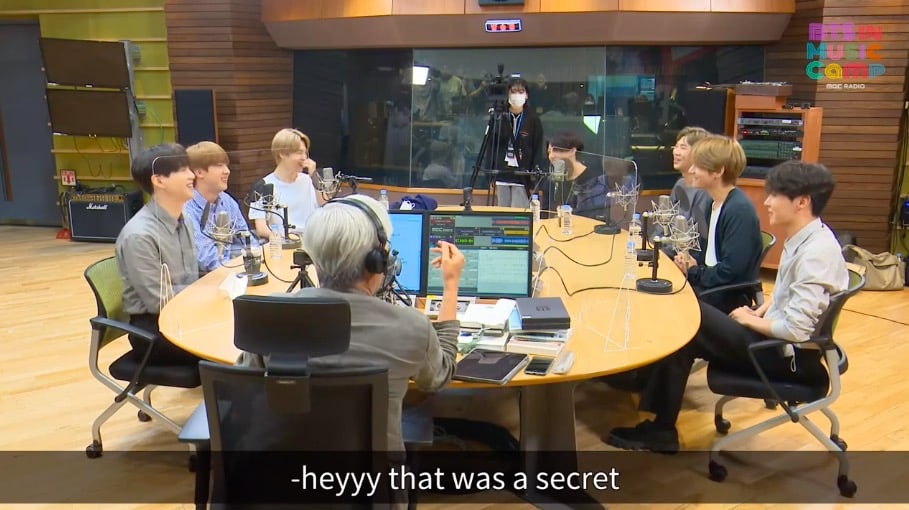 Jungkook said, “The members were very involved in the making of this album,” and RM said that their participation in their albums will continue to increase. He also said, “There are a lot of different genres on the album” and “The songs’ messages are what are needed the most right now during these times.”

Bae Chul Soo went on to ask them to each name an artist that’s had the biggest influence on them musically. Suga mentioned that he started making music himself after hearing music by Epik High and he also shared that he really liked the rapper T.I. “I was originally going to do a remix with T.I. for my mixtape, but it didn’t work out,” he added.

Jin shared, “The people who’ve really been a big influence on me are the members of BTS. It was thanks to them that I started doing music and was able to write songs too. Also, since they’re the ones who are most often singing by my side, they’ve been the biggest influence on me.”

Jimin commented that he was the same, sharing that his thoughts had changed thanks to the members. “Originally my dream was to perform on stage,” he said. “But after I became a trainee, they kept showing me how interesting it is to sing, create, and convey things. That made me also dream of singing well, making my voice beautiful, and creating good songs.”

Jungkook shared that he was also similar. “When I was asked who my ‘star’ was recently, I chose RM,” he said. “When I was a student in Busan, to be honest I wasn’t that interested in singing. Of course, I wanted to be like the amazing singers I’d seen, but after I spent a while looking, I came across a video of RM rapping. It was around the same time that Bang Si Hyuk was doing the show ‘Star Audition – The Great Birth,’ so I decided to go to that agency, and I’ve learned a lot from the older members.” He shared that the members had helped him a lot, and he’d come to learn about the fun of making music. “I think the members made me who I am,” he said.

RM suggested that they consider their members as the “base” answer and then said, “If I have to pick just artist, then it’d be the same now as it was in the past—I’d pick Nas. When we performed at the Grammy Awards with Lil Nas X, Nas was there too. That was the first time I saw Nas in person. I had so many mixed emotions; it was also his first time at the Grammys.”

“I was so nervous,” he said. “I think I was more nervous than when I met Drake.” V joked, “It was the first time I was able to understand RM when he spoke English.”

V also named his members as a big influence, saying that he started making his own music and even a mixtape because of them. “I want to say that it was possible because of my members,” he said. “Rain is the person who made me think that being a singer seems like such a cool job. When I watched him on stage, I wondered how he could perform in such a cool way all on his own.”

When asked by Bae Chul Soo about what he thought about Rain’s viral hit “Gang,” V spoke about how much he loved Rain’s performances and his passion. He said, “I watched ‘Gang’ and thought that people would really like it once some time had passed. It’s addicting.”

Up next, J-Hope chose Bae Chul Soo as a big influence. He went on to say, “Unlike the other members, I first got into music through dancing. I danced to music by Kris Kross, and when I came up to Seoul, I learned rapping from Yankie. I also really liked the artist J. Cole and was greatly influenced by him.” 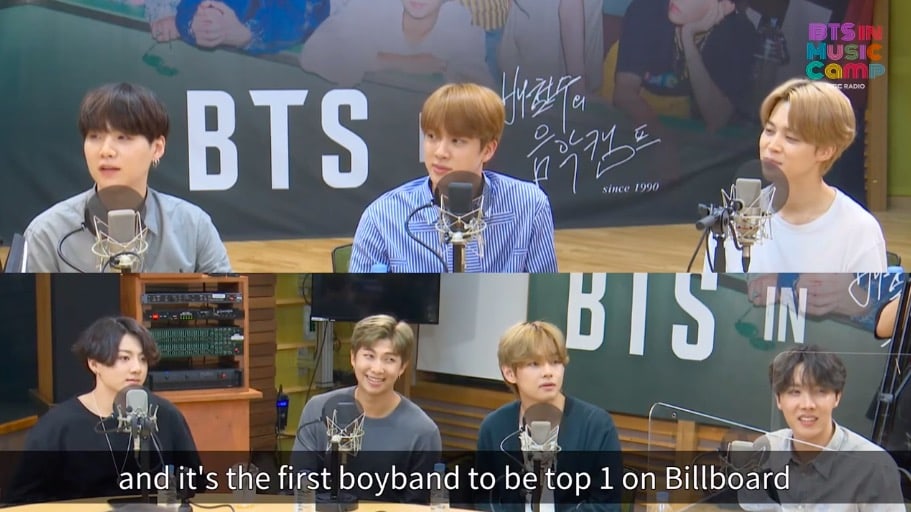 Bae Chul Soo asked the group if they feel scared because of their own level of influence. Suga said “We’ve thought about that a lot” and mentioned his solo track “Shadow” that addresses that. RM added, “We do have fears about that, but we think that we have to do what we can do.”

The host asked the guys to pick something outside of music that they’re currently interested in. Suga shared, “I recently started playing the guitar so I spend all day playing that. Outside of that, I’m interested in world peace.”

Jin shared, “My brother’s in the food business and it’s difficult lately because of the COVID-19 situation. We’ve been meeting up a lot and putting our heads together to figure out how to improve things. So I think I can understand to some degree what a lot of people are going through because of COVID-19. He even sold his car to supplement his business. It made my heart ache, so I’ve been trying to come up with ways to help.”

Jimin commented that after the COVID-19 outbreak, he doesn’t think he’s had any interests beyond their concert and album. “Outside of practice time, my brain stops,” he said. “I don’t do anything at home. I hope that the situation improves soon.”

RM said that while they’re unable to go overseas, he decided to exercise more, so he’s been working hard at that. “I also like going to exhibits, so I’ve been looking at a lot of paintings and art,” he said.

Bae Chul Soo mentioned RM’s recent donation of 100 million won (approximately $84,700) to the National Museum of Modern and Contemporary Art and praised BTS for all their good deeds. Jimin said, “We have to do as much as we’ve received.”

V shared, “I’m happy lately. It took me a long time to get here. I had a lot of worries, but I’ve tried to find small bits of happiness within that situation.”

J-Hope said, “I thought about how I could express myself in a different way, other than using music, and I came up with using clothes. I think I’ve been happy when wearing clothes that suit me.”

As the show wrapped up, Jimin said, “Thank you, everyone. We miss you a lot, we’re grateful, and we love you.” RM said to Bae Chul Soo, “I hope that you’ll commentate for the Grammy Awards next year too,” and Suga said, “I want to definitely go to the Grammys.” Jungkook promised, “We’ll work harder.”