Girls’ Generation’s Hyoyeon and Sunny and Lovelyz’s Mijoo and Kei appeared together on “South Korean Foreigner”!

On the September 16 episode of the quiz show, Mijoo and Kei shared that Girls’ Generation is their role model. Mijoo said, “They’re a long-running group, and also I think I wouldn’t have had any idols when I was younger if it weren’t for Girls’ Generation.” Kei said, “I want to shine for a long time like Girls’ Generation. They’re my role models when it comes to their skills too and they’re legends in every way.” 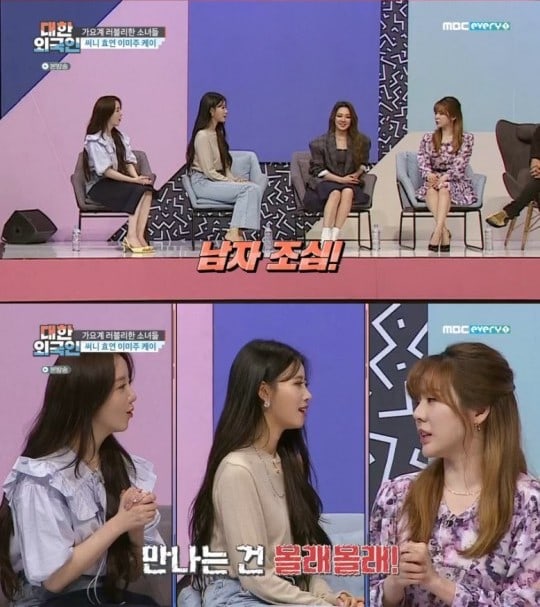 The Lovelyz members asked Girls’ Generation if they have any advice they could share, and Hyoyeon recommended that they talk together if there’s a problem. Kei shared that Lovelyz is the type to talk about things right away if someone is upset about something.

Sunny then said, “Sometimes there are some bad men who try to hit on members of the same group.” Mijoo jokingly pulled out her phone and said she needed to record Sunny’s advice, making everyone laugh. Sunny continued, “We’d share information about that in advance, since our relationship was so good and because such a thing could harm our teamwork.”

She went on to say, “I’ve heard that some senior artists would exchange numbers through vending machines, but in our day we did video calls.”

During the show, Sunny also shared some of Girls’ Generation’s rules, including their “five-minute talk” rule. She said, “At the end of the day, we’d talk for about five minutes. We also promised each other that when we’re promoting separately like we are now, we’ll meet once a year.”

Hyoyeon added, “We always take a group photo. It’s not polite for me to just upload photos that I personally like. We always confirm with each other. So even if we take 100 photos, only three or four make it.” 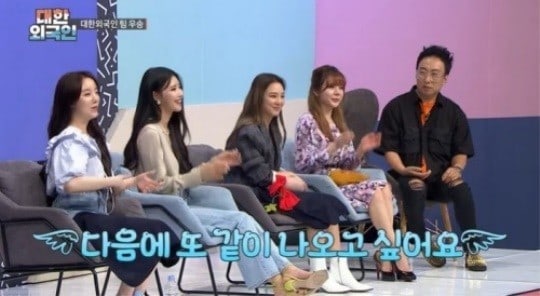 When asked by the MC about which member they think will get married first, Hyoyeon said, “I really think it’s me.” She added, “When I was asked in the past about my dream, it was being a good wife and wise mother.”

Hyoyeon went on to say that she thinks Sunny will get married second. She joked, “Sunny’s been taking care of plants lately, so it makes me wonder if she’s getting ready for marriage.”