Ong Seong Wu, Shin Ye Eun, And Kim Dong Jun Are Entangled In A Love Triangle In “More Than Friends”

JTBC’s upcoming drama “More Than Friends” has unveiled an intriguing new poster of its three leads!

“More Than Friends” is a new romance drama about two close friends who both fall in unrequited love with one another over the course of 10 years. Shin Ye Eun will star as Kyung Woo Yeon, a calligrapher who finally decides to give up on her one-sided love for her guy friend after a decade of pining. Ong Seong Wu will play photographer Lee Soo, the longtime object of Kyung Woo Yeon’s affection, who suddenly starts seeing her in a different light after years of friendship.

On top of their catastrophic lack of timing, Kyung Woo Yeon and Lee Soo’s seemingly impossible romance faces another obstacle: the charming and assertive On Jun Soo (played by ZE:A’s Kim Dong Jun), who changes everything once he enters the picture. On Jun Soo isn’t afraid to express his feelings, and he sweeps Kyung Woo Yeon off her feet by saving her from a sticky situation and offering her a rare business opportunity.

The newly released poster highlights the tense love triangle between the three characters. Lee Soo stands alone, wistfully staring off into the distance with his earphones in. Although Kyung Woo Yeon stands together with On Jun Soo, who thoughtfully protects her from the rain with an umbrella, she is unable to stop herself from looking back at Lee Soo with a slightly melancholy look in her eyes. With all three characters facing different directions, the poster raises the question of which “Soo” (Lee Soo or On Jun Soo) will ultimately hold the key to Kyung Woo Yeon’s heart. 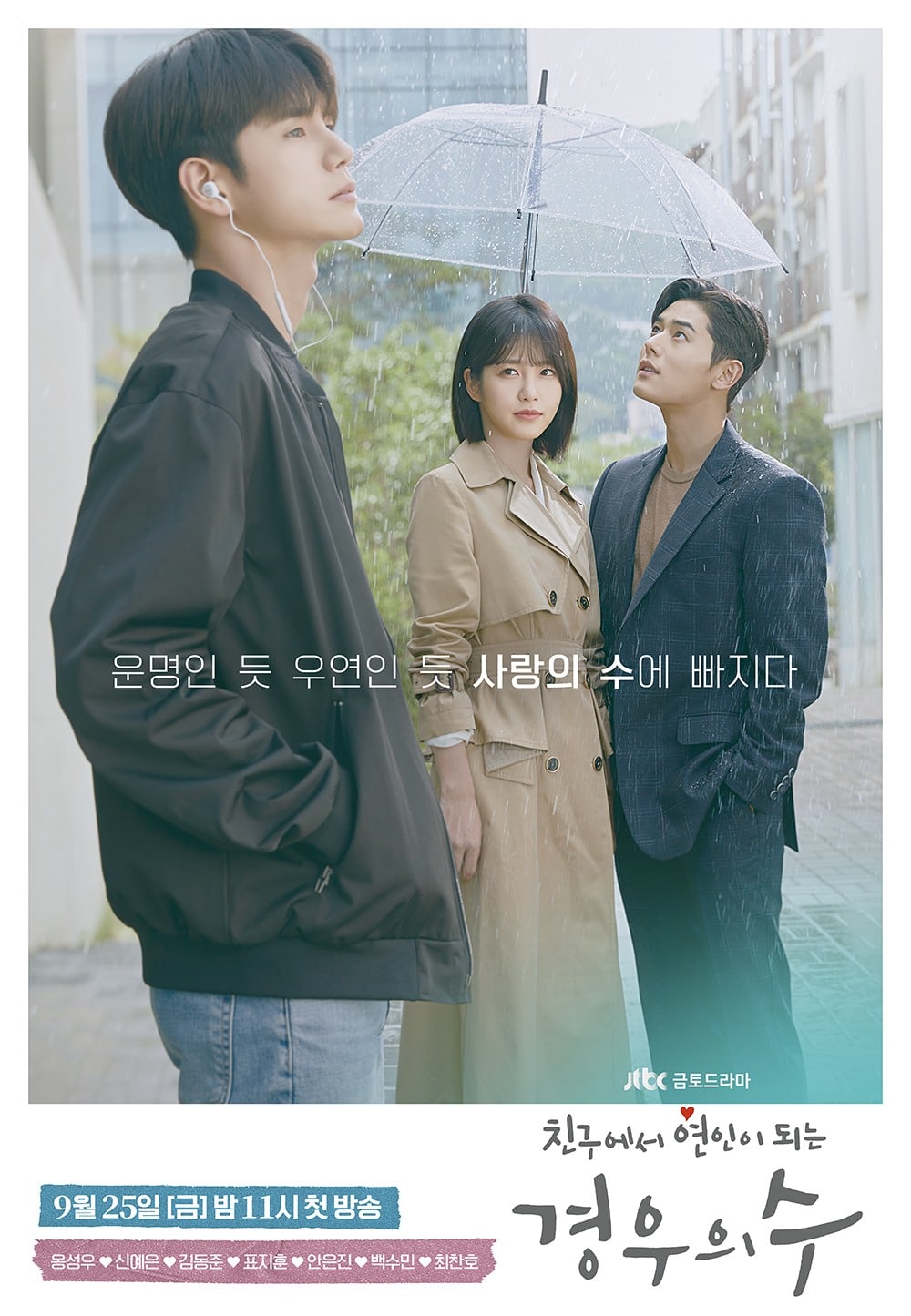 The producers of “More Than Friends” praised each of the three actors, commenting, “Ong Seong Wu’s charm lies in the contrast between his cold image and his warm, gentle manner of speaking. With his sorrowful gaze, he’s an actor well-suited to the role of Soo, who has many emotional scars. He has that first love vibe, and his photography hobby and occasional mischievous side made him perfect for the character.”

“Shin Ye Eun is simply Kyung Woo Yeon herself,” they continued. “She seems pure and transparent, but she also knows how to portray depth of emotion, and she knows how to balance that deep emotion with lovability. She did a great job portraying Woo Yeon, who has a wide range of emotion.”

Finally, the producers remarked, “Kim Dong Jun is an actor whose eyes convey sincerity. He really resembles Jun Soo, who was innocently wounded by his first love and later pursues Woo Yeon with complete sincerity.”