The new comedy drama is about a zombie in his second year of resurrection who becomes a detective and desperately searches for truth about his past. Choi Jin Hyuk will be starring as Kim Moo Young, the titular zombie detective who struggles to adapt to his new life and coexist with humans. Park Ju Hyun will take on the role of Gong Seon Ji, a writer of an investigative journalism program with unrivaled optimism, tenacity, and a sense of justice. 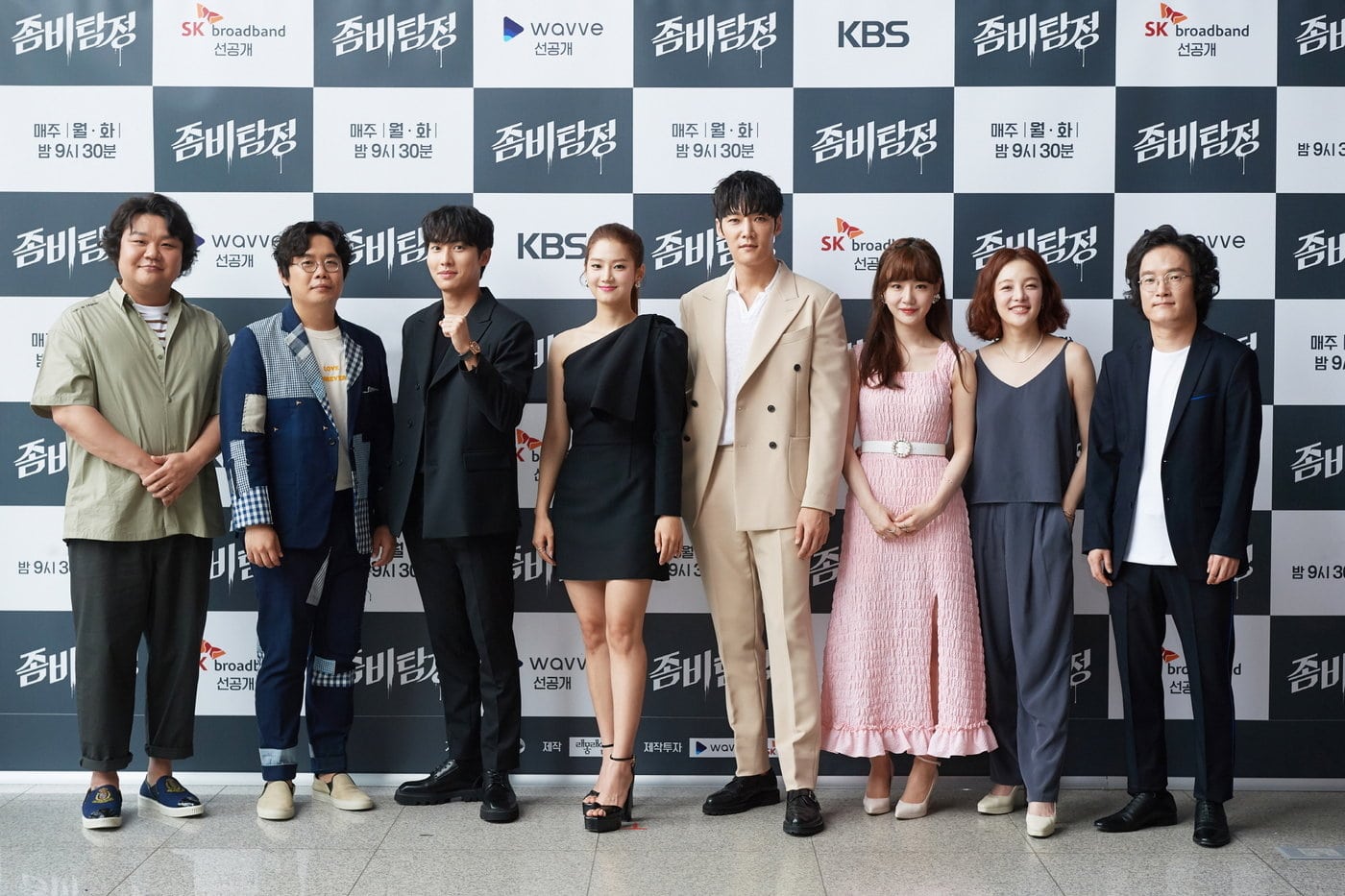 While talking about the casting for the drama at the press conference, director Shim Jae Hyun said, “All the actors that I’d wanted the most for each role are here with us today.” He added, “On top of them all being actors with a lot of personality, they also work well together.”

Choi Jin Hyuk shared, “When I first read the script, I did think about it a lot, and it was a new challenge for me so I also had some fears about the project. But due to the great actors here, the director, and the staff, I’m having fun filming. I think the end product is bound to be great.”

He went on to say, “I made such a shocking acting transformation that I think you might even wonder, ‘Did this kind of zombie exist before?'” He added that he’s been ruining his image to his heart’s content, since he trusts in the director.

“I’m even dancing this time and doing all kinds of things,” Choi Jin Hyuk continued. “It was shown in the teaser a bit but I also wear a headband and shower, and I took a bubble bath for the first time in my life.” He laughed and said, “I think you should look forward to it.”

On the topic of the hardest thing about acting in the role, Choi Jin Hyuk said, “As you may have seen in the teaser, getting the zombie makeup on took a really long time. The makeup alone took about two hours, and we’ve brought that down so that now it takes around an hour. Since that special effect makeup is involved, there’s some discomfort when it comes to filming too. Also, I had to wear fall clothing in the summer, with a trench coat and hat, so that was also a bit difficult.”

Choi Jin Hyuk went on to say that he and the director had worried a lot at first about how the zombie makeup would look, but they were satisfied with it once they did a filming test. “In our drama, the zombie wants to look like a human, so he puts on BB cream and covers up his zombie wounds,” he said.

“I thought that comedy acting was the hardest thing, but I think this is my first time properly taking on the challenge,” he said. “Our drama really combines a lot of different genres, so I think viewers will find it unusual and interesting.” Choi Jin Hyuk also shared that he thought a lot about how to portray details about the zombie character, including thinking about the way he walks and his expressions. 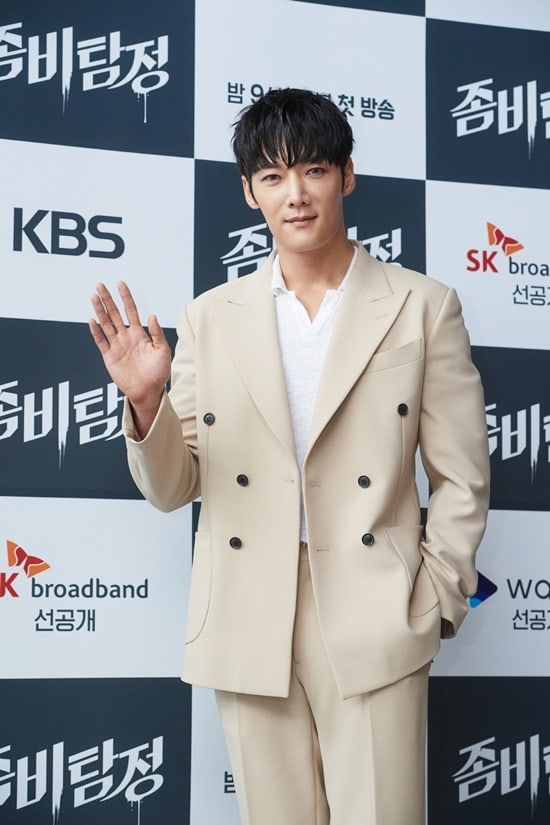 “It would be impossible to not feel pressure,” she said. “I’m grateful for the fact that my previous work did well and I’m feeling pressure at the same time. I’m putting my heart and soul into filming ‘Zombie Detective’ too.”

She went on to say that she felt a burden over having to lead the drama as a star, and she said she aimed to preserve her character’s charms and she worried a lot about having many co-stars to try to keep in step with. “However, they made me feel so comfortable,” she said. “So I’m trusting in the senior actors and director and having fun filming.”

Park Ju Hyun also compared herself to her character Gong Seon Ji. She said, “One thing that’s similar about us is that we’re people of action. Gong Seon Ji can’t stand injustice and she’ll see things to the end to the point that she even sacrifices herself, so I think she’s a cool person. It’s made me wonder if I could go so far in a fight for justice, and I’m learning through Gong Seon Ji’s innocence and passion.”

When asked what it’s like to be in a zombie drama, Park Ju Hyun said, “I tried the zombie makeup once. I like horror and zombie movies so I really wanted to try it. But after I did, I thought that Choi Jin Hyuk is really amazing and it would be a lot for him to go through. I think he’s making a lot of sacrifices in order to create a more realistic look.” 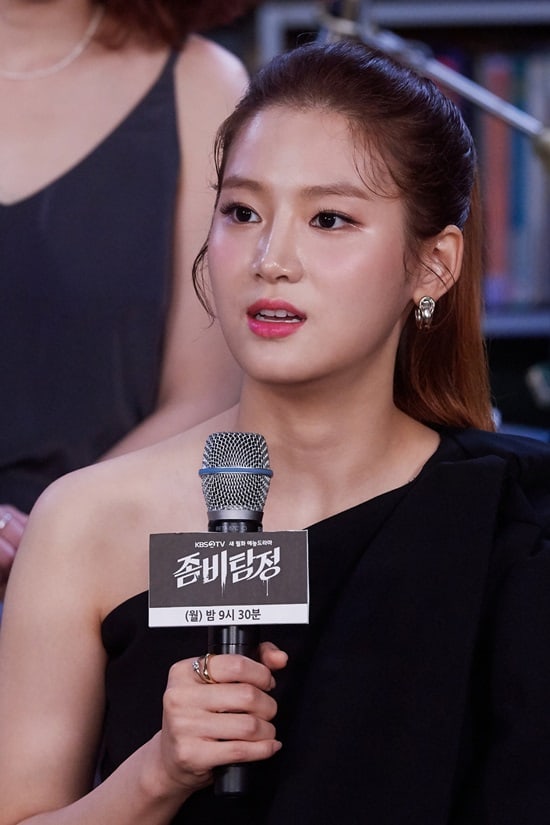 Choi Jin Hyuk said, “I wonder if there’s been a Korean drama like this recently. I’m sure that it’s a unique show. Ratings and the public’s opinion will be determined by viewers, but we’re filming it while personally thinking that it feels unique. The actors here are excellent and I think even just watching their performances is fun. The script is really interesting. We’re pulling off the script 200 percent so I think it will be a good drama to enjoy without thinking too much.”

Park Ju Hyun said, “There are a lot of people going through a hard time during this difficult period, and I hope that our drama will be healing for them and make them laugh a bit.”

“Zombie Detective” premieres on September 21 and will be available on Viki.