Channel A’s “Lie After Lie” has revealed new stills of Yeon Jung Hoon and Lee Yoo Ri ahead of the upcoming episode.

“Lie After Lie” is a new suspense-romance drama starring Lee Yoo Ri as Ji Eun Soo, a woman who puts her life on the line with a dangerous lie in order to be reunited with her biological daughter. After marrying into a chaebol family, Ji Eun Soo finds herself branded a husband-killer in the blink of an eye — and during her imprisonment for her husband’s murder, she loses custody of her daughter.

Previously, Ji Eun Soo found out that the biological daughter from whom she had been separated 10 years ago was actually Kang Woo Joo (Go Na Hee), who had been adopted by Kang Ji Min (Yeon Jung Hoon). Although she had decided at first to leave for the sake of her daughter’s future, she changed her mind, choosing instead to get closer to Kang Ji Min in order to become her daughter’s new mother. Having decided on living a dangerous lie, Ji Eun Soo began to appear more frequently in front of Kang Ji Min.

In the new stills, Kang Ji Min appears in a stained apron and gloves, a significant change from his usual professional demeanor as a reporter, as he paints the rooftop. He smiles warmly at Lee Yoo Ri, who attempts to help him by picking up a paint roller and tray. Curiosity is mounting over how their relationship could have progressed so quickly in such a short amount of time. 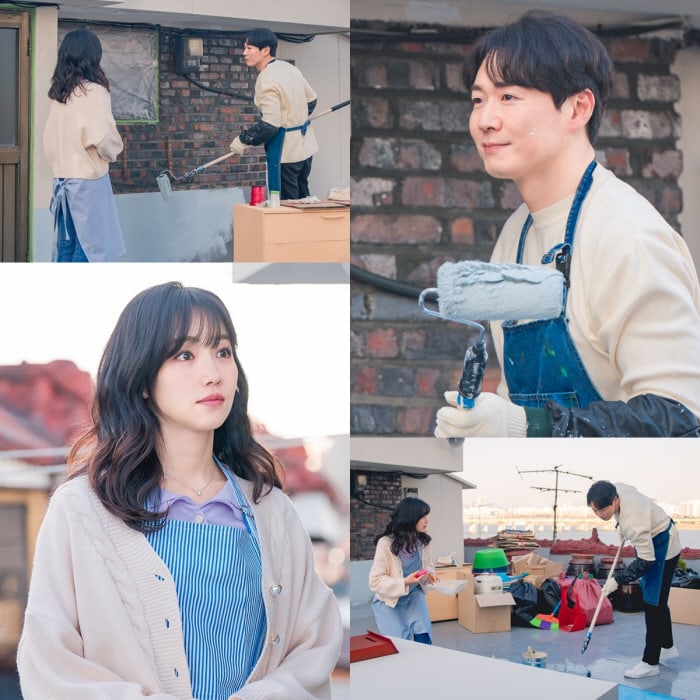