IU gave the gift of a mini concert to her fans through a special broadcast on “Yoo Hee Yeol’s Sketchbook”!

The singer debuted 12 years ago on September 18, 2008 when she performed “Lost Child” for the first time on a music show. IU began the mini concert by saying, “Today, the day this airs, is my 12th debut anniversary. I was thinking of how I could spend the day in a meaningful way, and ‘Sketchbook’ came to mind. The fact that you’ve given me this stage for over an hour is such an incredible gift.”

She shared that they’d booked the Jamsil Olympic Stadium for a concert for her 12th anniversary but it had to be canceled due to the COVID-19 outbreak, and she said that she’d fulfill her wish through “Yoo Hee Yeol’s Sketchbook” instead.

The special lasted 100 minutes and featured performances of many of IU’s beloved hits. Even featuring many changes in her outfits, hair, and makeup, it gave a truly concert-like experience with IU’s live performances taking fans on an unforgettable journey through her massively successful career. 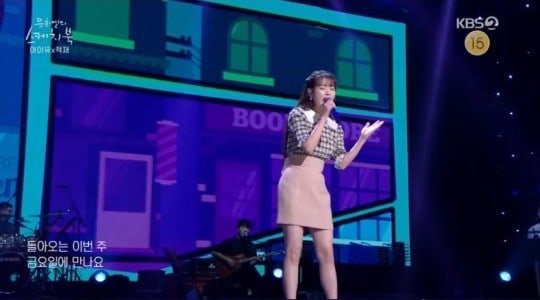 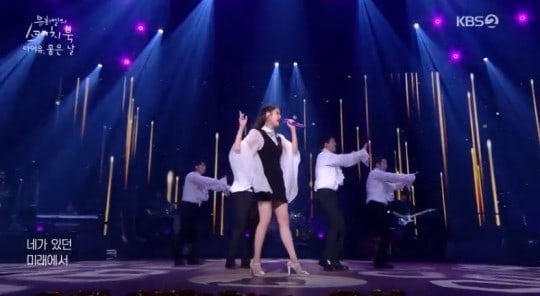 During the show, IU gave the first television performances of her 2018 single “BBIBBI,” 2019 song “Blueming,” and 2020 track “eight,” which is a collaboration with BTS’ Suga. During her performance of “Blueming,” videos of her fans cheering her on were shown on screen.

“I was thinking of them as my audience when I was rehearsing, and I was really touched,” she said. “I really miss you so much. I hope we can meet soon. Thank you.”

When asked to pick the songs she cherishes the most out of the tracks she wrote lyrics for, IU picked “Heart,” “Knees,” and “Through the Night.”

She was also asked to name an unforgettable moment from her 12 years as a singer. She said, “I’m a fan of Corinne Bailey Rae and g.o.d, and I got to perform on stage with them. I think I will never forget those moments in my whole life.”

IU also performed an untitled song for the first time, which she composed and wrote lyrics for herself. Take a listen below!

IU said, “I worked hard and prepared for a month. To be honest, I’m not sure if I deserve such extravagance and luck. But since I’ve been given the opportunity, I wanted to sing songs you may have heard before, with a happy smile, since some viewers may be going through a hard time. I know that a 12th debut anniversary isn’t that big of an event, but I wanted to express my gratitude.”

Watch many more of her performances below:

“The Meaning of You” (featuring Yoo Hee Yeol, original by Sanulrim)