Jang Jae In talked about suffering from mental health issues and becoming a victim of sexual assault in a series of Instagram posts.

On September 22, the artist shared a story about dealing with her mental health in the following post:

Celebrating how I finished recording an album today that’s taken a long time and how things are improving as I’m consistently receiving therapy! I’m leaving this message. It took me 11 years to tell this story.

I had my first seizure when I was 17 years old, and at the age of 18, I began to suffer from severe anxiety, seizures, hyperventilation, insomnia, anorexia, and bulimia due to events that I don’t even want to talk about. (Those who have suffered from these things probably already know what I’m referring to, and they’ve really went through a lot.)

I said I’ve been receiving therapy, but it wasn’t easy to find a doctor who was right for me, and I couldn’t be treated more because going to a hospital was seen as taboo at that time.

On top of that, the environment in which I grew up had a big impact on my symptoms. (Sorry, Mom! But you know that I’ve decided to sing.)

So as I entered my 20s, my wish when I was 24 to 29 years old was to please, please become a little bit happier, but that wasn’t something that happened even when I decided to do something about it.

Even if I only wanted to think good thoughts, and even when I wanted to live diligently, becoming sick inside the heart makes me keep falling apart.

That’s how I grew up with a long-running illness, and lately, it has become a part of me.

1. First off, I let go of the word “happiness” completely

2. I acknowledged that I’ve lived a life where I had no choice but to be tied up by my low self-esteem

3. Above all, I took medication consistently for a year

And many of my symptoms improved. (In the past, I was disapproving of medication so I only took it for three months at the longest!)

As I was planning my album when I was 18, I decided to tell my stories honestly, and that was because I found strength seeing others do the same. When I was younger, I hung on while watching artists sing after overcoming what I suffered from, as well as their own hardships.

I’m worried my first post is too long to read. If you read all the way here, thank you. The only thing I’m good at is telling stories, so I’m trying to unpack these stories little by little along with my album.

This is something very personal, but the pain and anxiety of others are more familiar than you think.

Later that day, Jang Jae In uploaded the following post, where she opened up about her experience with sexual assault.

Thank you. I started my album beginning with that incident.

A year later when I was 19 years old, I was notified that the culprit was properly caught.

The person who did that to me and left was…a guy my age.

But the hardest part about that was hearing that the guy turned out like that because he was bullied by others.

It looked like they saw me on the streets one winter and promised him they wouldn’t bully him any longer if he would do that to me.

The reason why it was hard for me to learn about this was because I thought, “If that guy is a victim as well, then what exactly am I? What did I just go through?” That’s what broke my heart the most.

Now that I’m older, I have better judgment about those things, but if I reflect on the general situation, I think about how nice it would have been if someone had told me that what happened to me wasn’t my fault.

There are probably more victims of sexual assault living with shame and guilt than you’d think, like me.

I gained strength and endured everything by watching singers who went through the same thing I did.

I hope that I, still hanging around to sing, can become a source of strength for someone who’s going through the same thing as me.

In her Instagram stories, Jang Jae In left a message that read, “Now that I’ve talked about it, I’m really exhausted. I’m nervous right now, but I’m trying to calm myself down reading your comments. I’m just grateful…!” 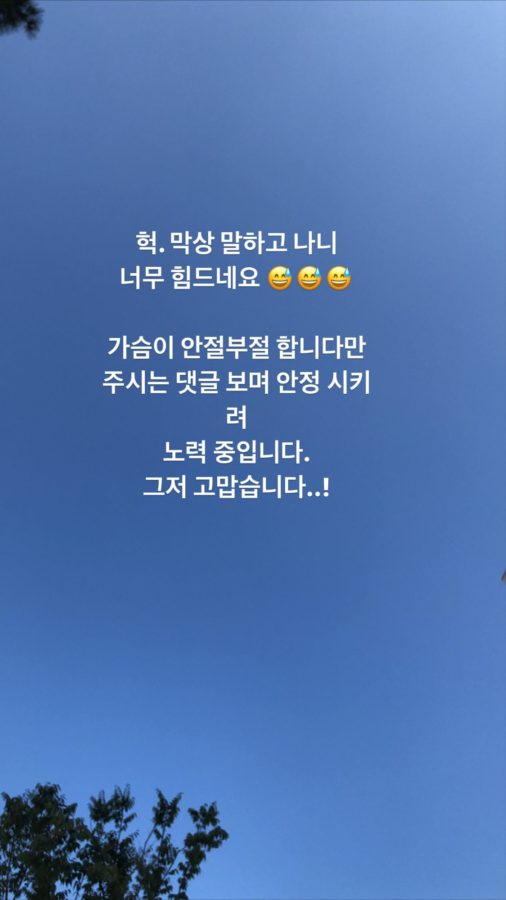 Jang Jae In shared another post on the matter, where she explained that she was contacted by her old high school friends who were worried after seeing her Instagram posts. Jang Jae In wrote that she had gotten rid of her phone after the incident and couldn’t contact any of her friends.

“I found out later that you guys were upset with me,” she said. “I hope you all won’t be sorry about the news about me today. I want to say that I’ve grown a lot after everything happened!” She ended her post by sending her love to her friends and thanking them.

She later shared in her Instagram stories that she wondered if the world had changed compared to how it was in the past, when the act of revealing such a story was looked upon negatively. She wrote, “Will I regret what happened today?” and said, “I think I won’t now.”

Later on, in the early hours of September 23, Jang Jae In wrote, “I’ve read everything! It was such an exhausting day, but — how should I describe it — I feel like I’ve grown roots.”

She explained that being unable to be honest with the people around her had caused the painful feeling of floating around without roots. She wrote, “I feel like by telling this story, a wall that I’d secretly put up between myself and my friends has come down, and I’ve now grown roots that I hadn’t even dared to hope for.”

She went on to say, “If you possibly felt uncomfortable because of my news, then I’m sorry. However, let’s not put shame upon cases like this.” 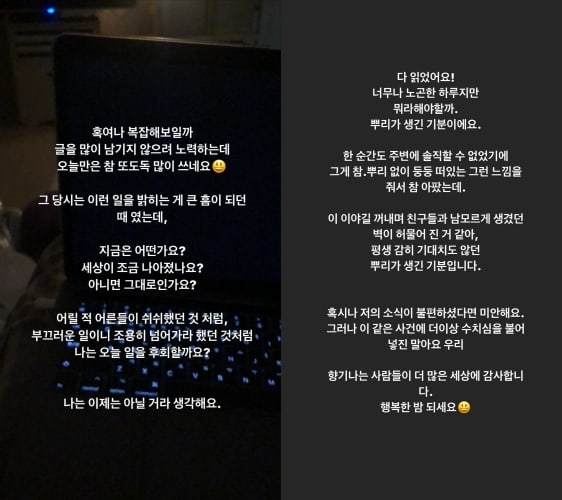 Jang Jae In
How does this article make you feel?