BTS gave a speech at the 75th United Nations General Assembly in which they encouraged everyone struggling during the COVID-19 pandemic.

This is the second time that BTS has spoken at the United Nations General Assembly, as they previously gave an address at the launch ceremony of UNICEF’s Generation Unlimited at the 73rd UN General Assembly in 2018. Starting in 2017, BTS has worked with UNICEF on the campaign “Love Myself” to end violence against youth.

BTS’s speech at the 75th United Nations General Assembly aimed to impart the message “Let’s live on in a new world,” encouraging everyone to break free from despair and support one another in warm solidarity.

The members began by speaking about how the COVID-19 pandemic has affected them, with their world tour and other plans canceled, and their worlds limited to their rooms. “I looked up and couldn’t see the stars at night,” said RM. 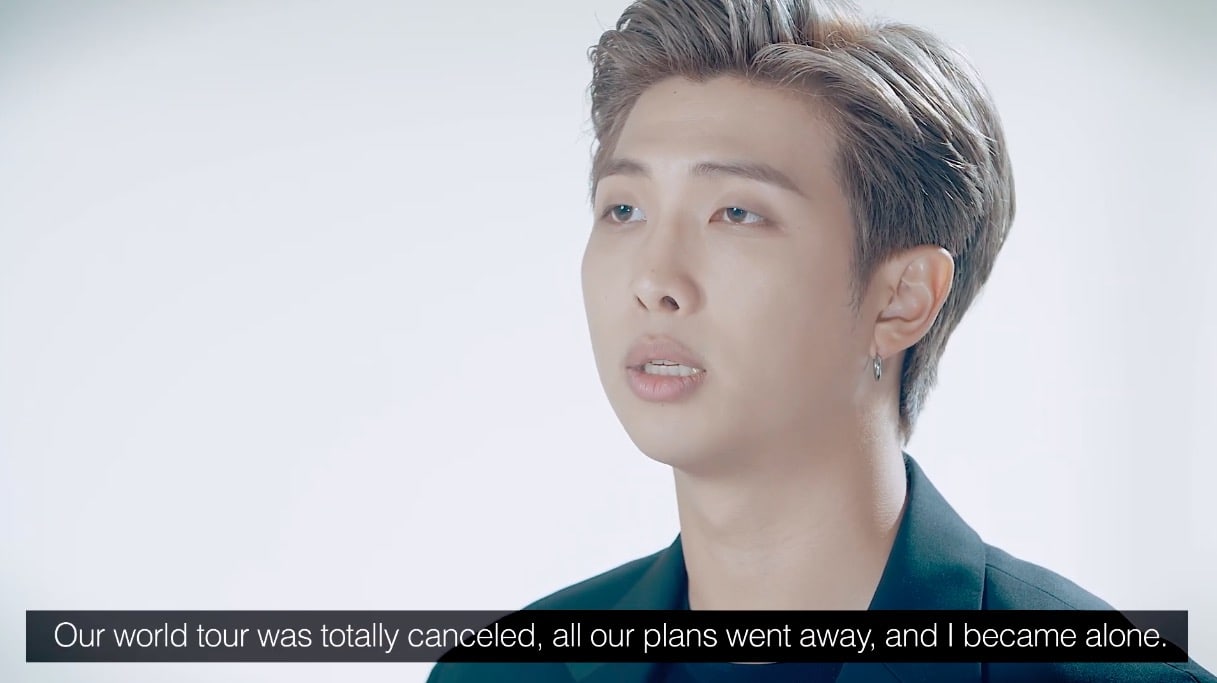 “I felt hopeless,” said Jimin. “Everything fell apart. I could only look outside my window.” He shared that he went from performing for fans around the globe to his world shrinking to only his room. Jimin continued, “And then, my friends took my hand. We comforted each other and talked about what we could do together.” 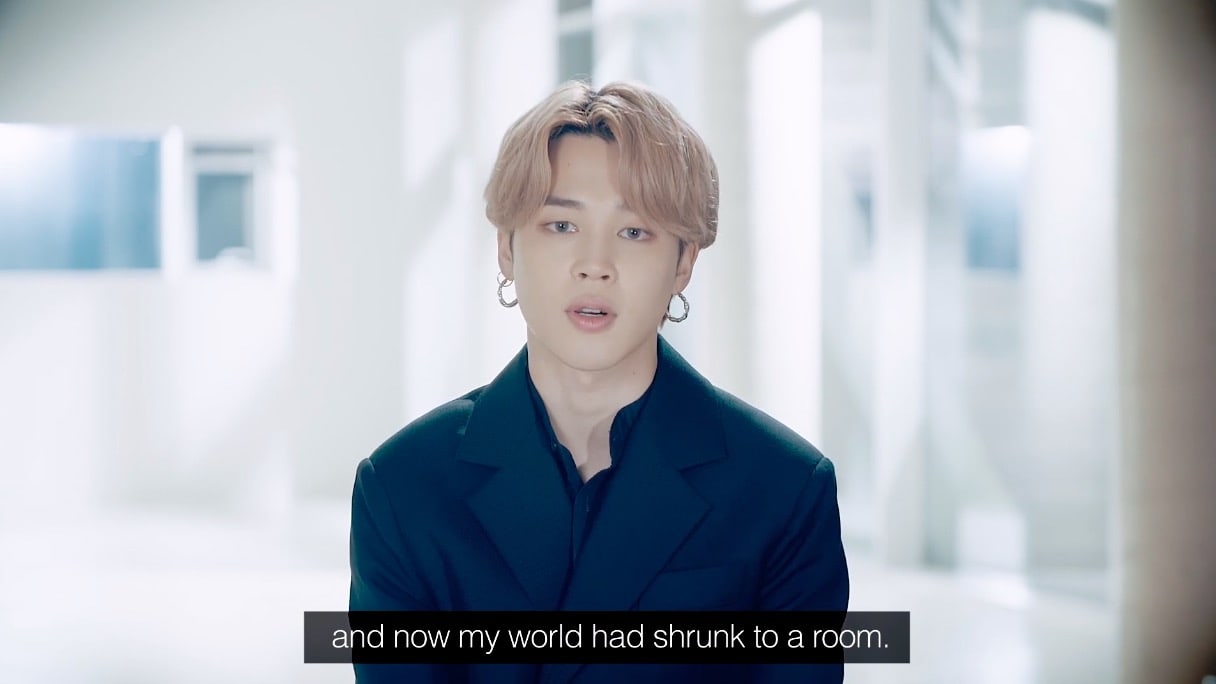 Suga described how his life had become simple for the first time since his debut, calling it an unwanted but precious time. He said that he’s used to the world shrinking in an instant, explaining, “When I’m on tour, I stand in the bright lights amid the fans’ loud cheers, but at night back in my room, my world becomes only a few paces wide. The room itself was small, but my world and our world reached far and wide. In this world, we had our instruments, our phones, and our fans.” 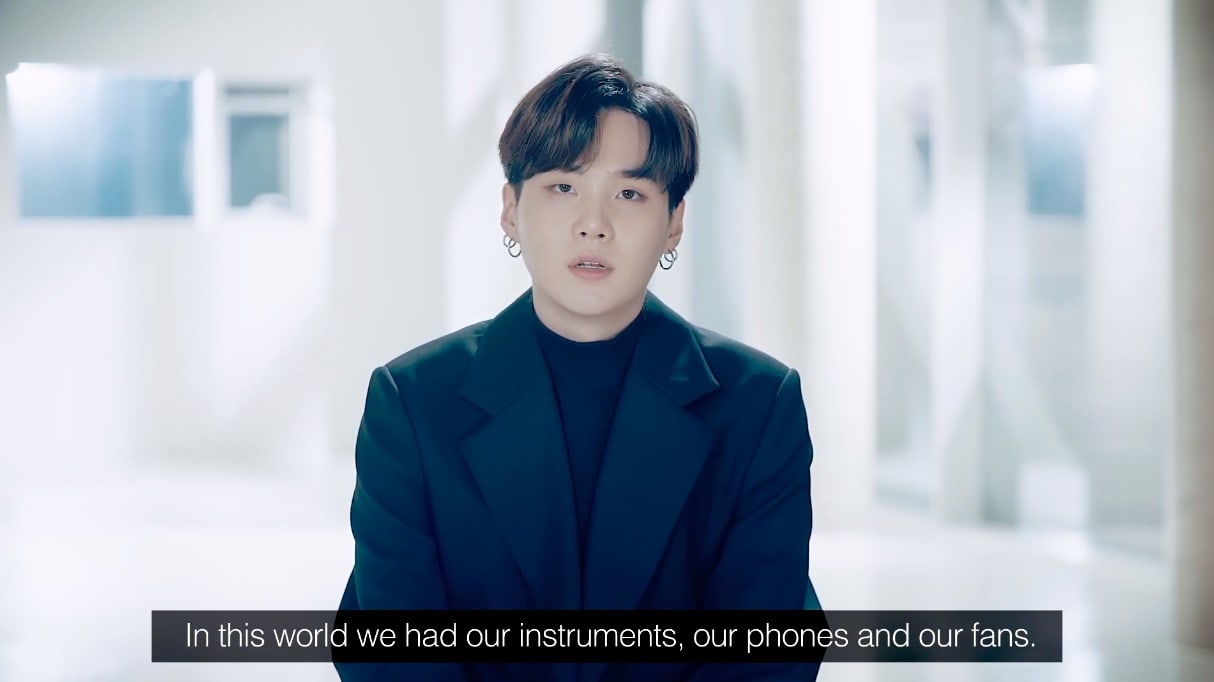 V continued, “But this time felt different. It felt lonelier and smaller.” He realized it was maybe because the act of imagining became harder. “I was frustrated and depressed, but I took notes, wrote songs, and thought about who I was,” he said. “I thought, ‘If I give up here, then I’m not the star of my life. This is what an awesome person would do.'” 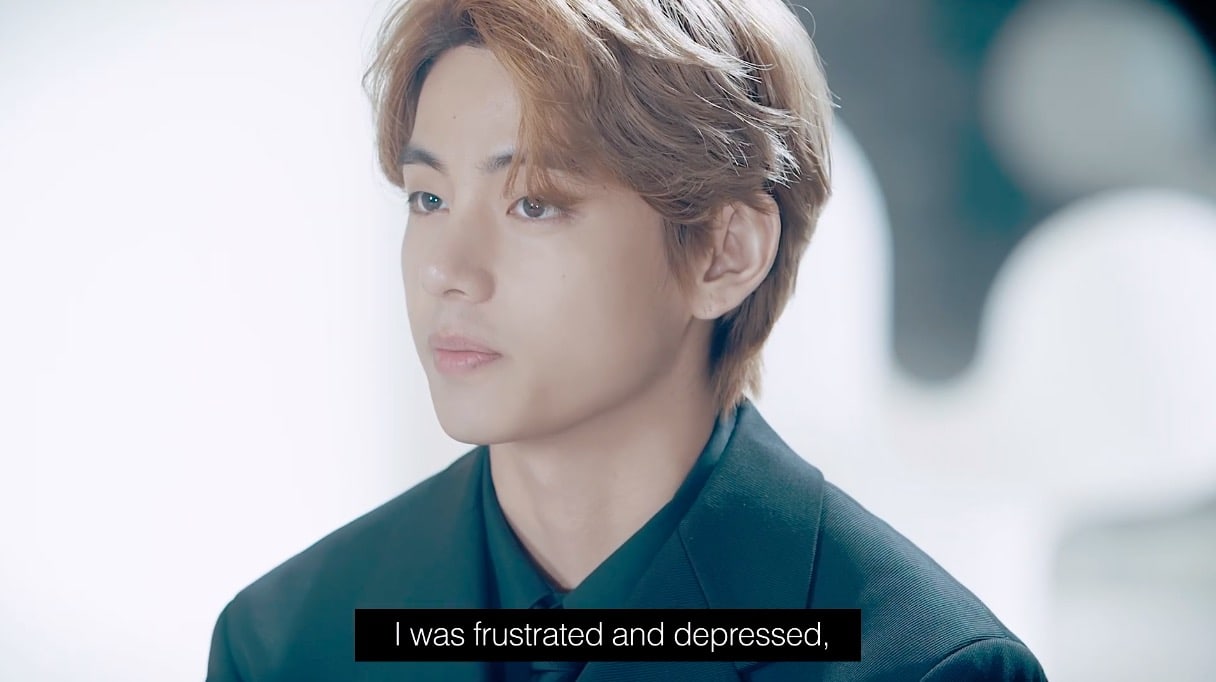 J-Hope shared that the group had embraced those emotions and the seven of them began to make music together. “This is where the music came from, and this made us honest,” he said. “Our lives are unpredictable. We don’t know all the answers. I knew where I wanted to go, but not how I could get there. All I did to get here was trust ourselves, do my best, and love what I do.” 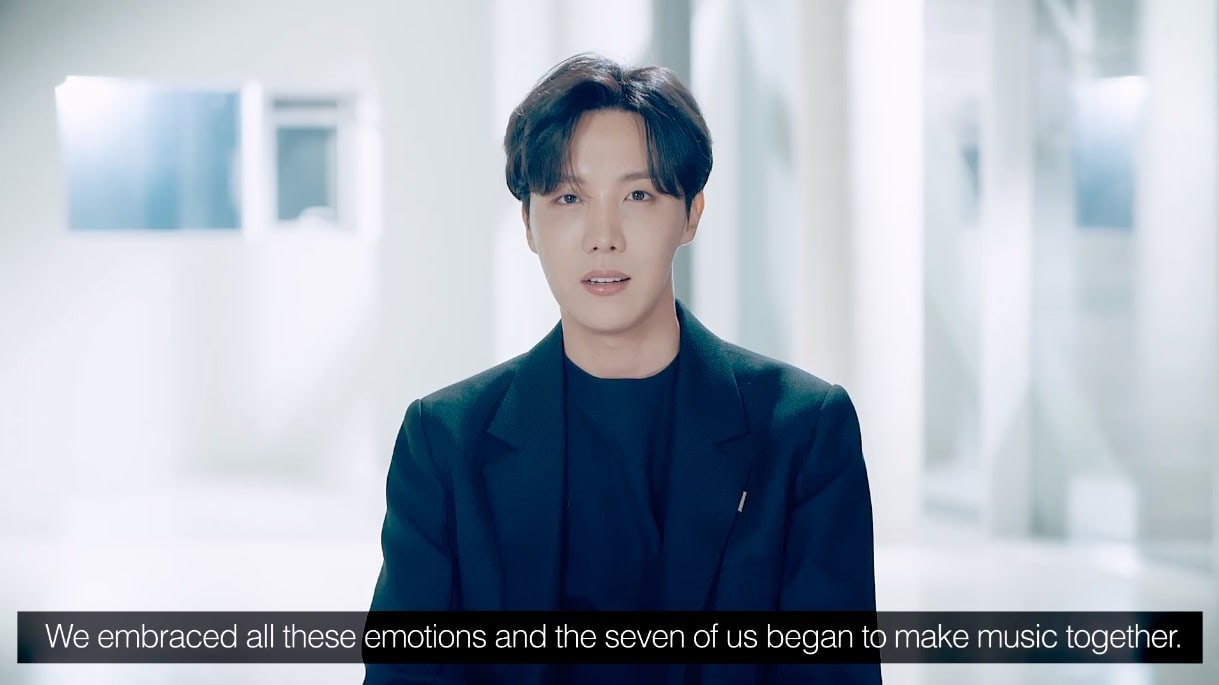 Jin said, “I found again the people I love. The other members, my family, my friends. I found the music I love, and I found myself. Thinking about the future and trying hard are all important, but cherishing yourself, encouraging yourself, and keeping yourself happy are the most important things.”

Jin explained that it’s important to cherish the importance of “me,” “you,” and “us,” noting that this is the message of their “Love Myself” campaign with UNICEF as well as their latest single “Dynamite.” 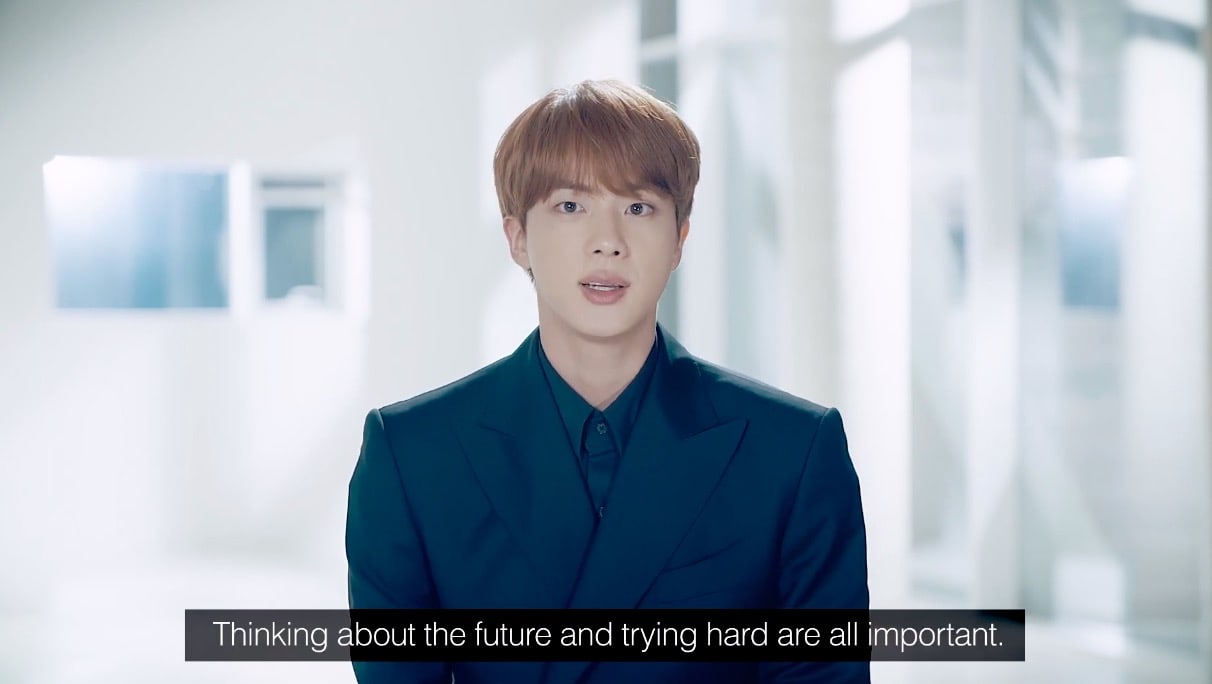 Jungkook said, “One night we were working together. RM said he couldn’t see the stars anymore, but I saw my face reflected in the window. I saw all of our faces. Our songs became the stories we wanted to tell each other. We live in uncertainty, but really, nothing’s changed. If there’s something I can do, if our voices can give strength to people, then that’s what we want and that’s what we’ll keep doing.” 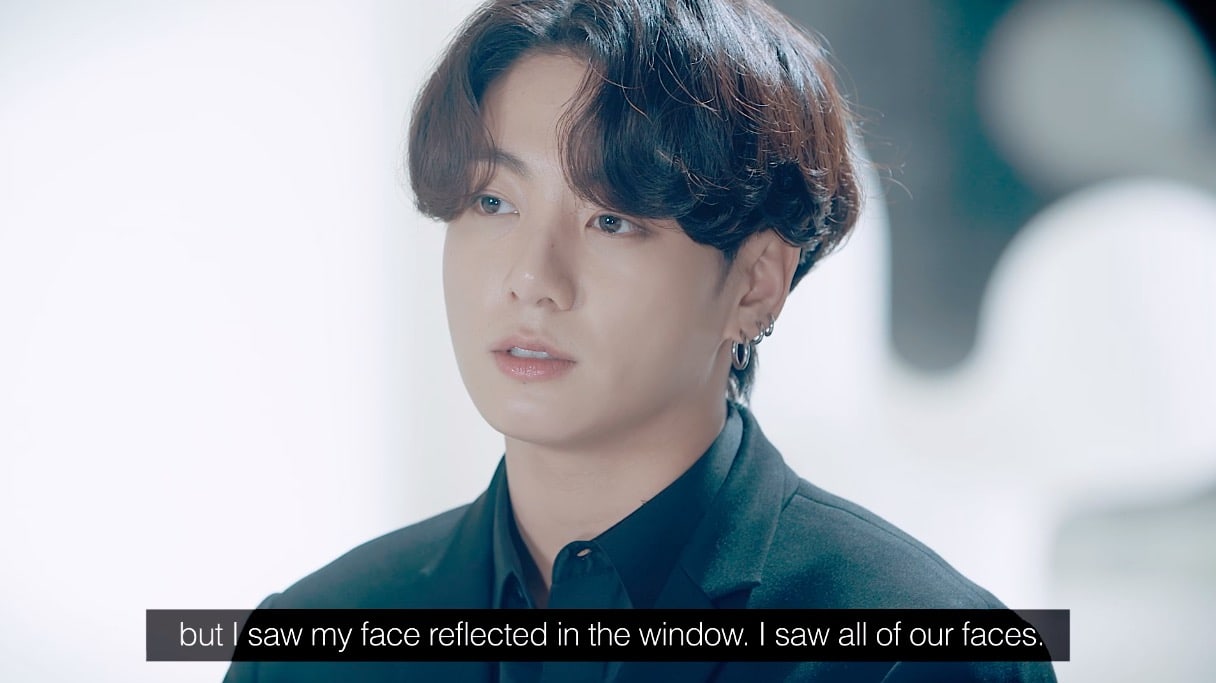 RM said, “When I start feeling lost, I remember my face in the window, like Jungkook said. I remember the words I spoke here two years ago. ‘Love yourself, speak yourself.’ Now, more than ever, we must try to remember who we are and face who we are. We must try to love ourselves and imagine the future.”

“BTS will be there with you,” he said. “Our tomorrow may be dark, painful, difficult, and we might stumble or fall down. But the stars shine brightest when the night is darkest. And if the stars are hidden, we’ll let moonlight guide us. If even the moon is dark, let our faces be the light that helps us find our way.”

“Let’s reimagine our world,” RM continued. “We’re huddled together tired, but let’s dream again. Let’s dream about a future when our worlds can break out of our small rooms again. It might feel like it’s always night and we’ll always be alone, but the night is always the darkest before the first light of dawn.”

The members ended the video by all saying, “Life goes on. Let’s live on.”

Watch their speech with English subtitles below: