Somi Opens Up About Her Fashion Sense, How She Connects To Others, And More

Somi recently participated in a pictorial and interview for Elle magazine. 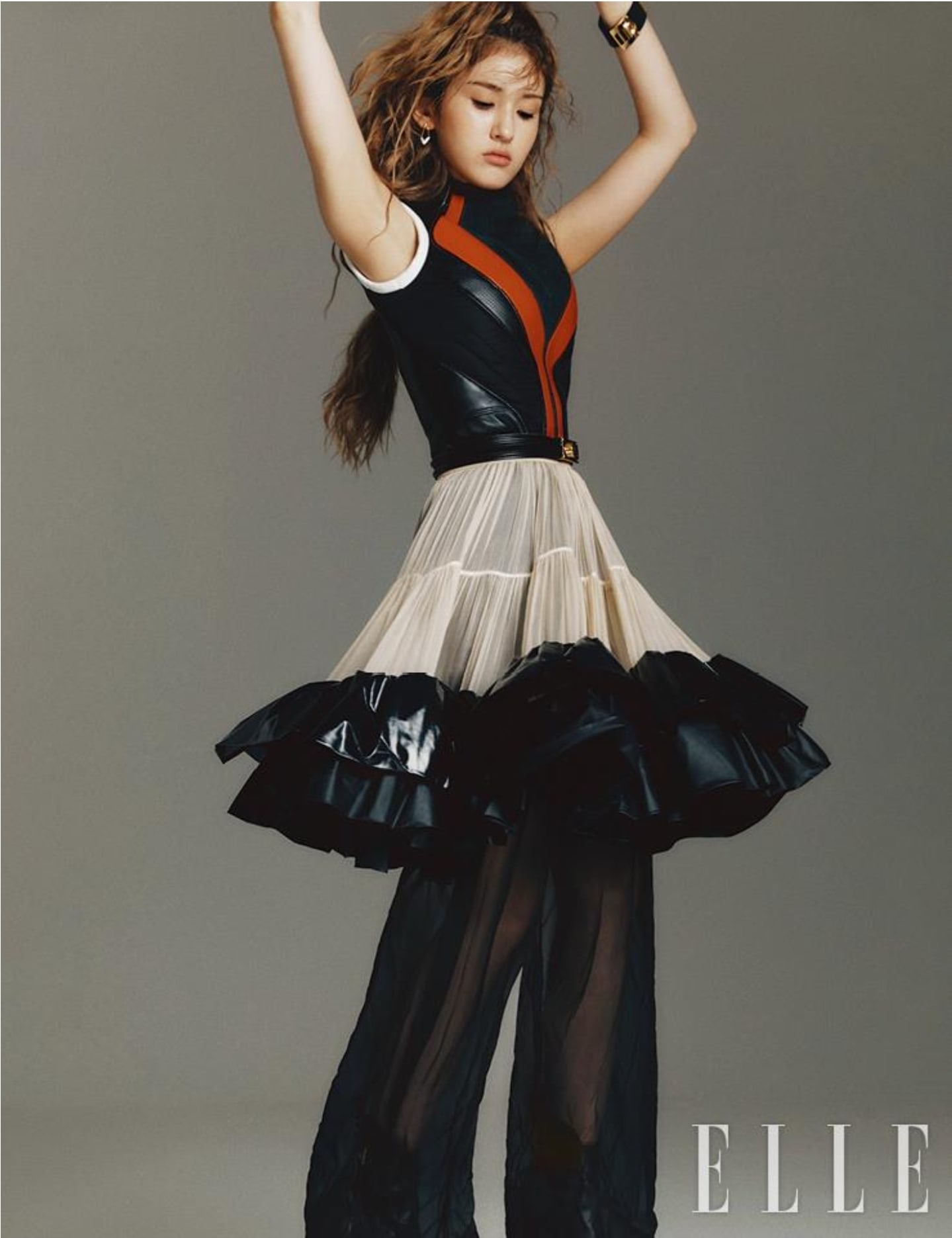 The singer received praise for her various confident poses during the photoshoot. Somi responded, “It’s thanks to my father for taking so many pictures of me when I was young. I’m comfortable posing in front of cameras. I’m also the type of person who works harder when I receive compliments.”

The interviewer also noted on her recent appearance on “Running Man” in which she talked about Generation Z. Somi said that although she didn’t pay much attention to it, articles began to refer to her as the “Icon of Generation Z.”

As part of a generation known for their firm beliefs, Somi’s independence also shines through in her own personal style, including a Louis Vuitton bag that she customized with a drawing of a unicorn. Somi commented, “I like monogram patterns and colors. When I think of the monogram bag my mother carried some 10 years ago, I still think it’s cool. I added a unicorn since I think it resembles me. I spent two weeks of my downtime at broadcasting stations making it.”

Somi’s natural charm also shows through her Instagram account, where she offers fans a glimpse into her everyday life. Somi admitted that there are times where she spends up to two days editing photos. “I used to have a private account a long time ago,” she revealed. “I would follow accounts that posted good restaurants and pretty clothes. I would also look at really pretty people’s accounts,” she added with a laugh. 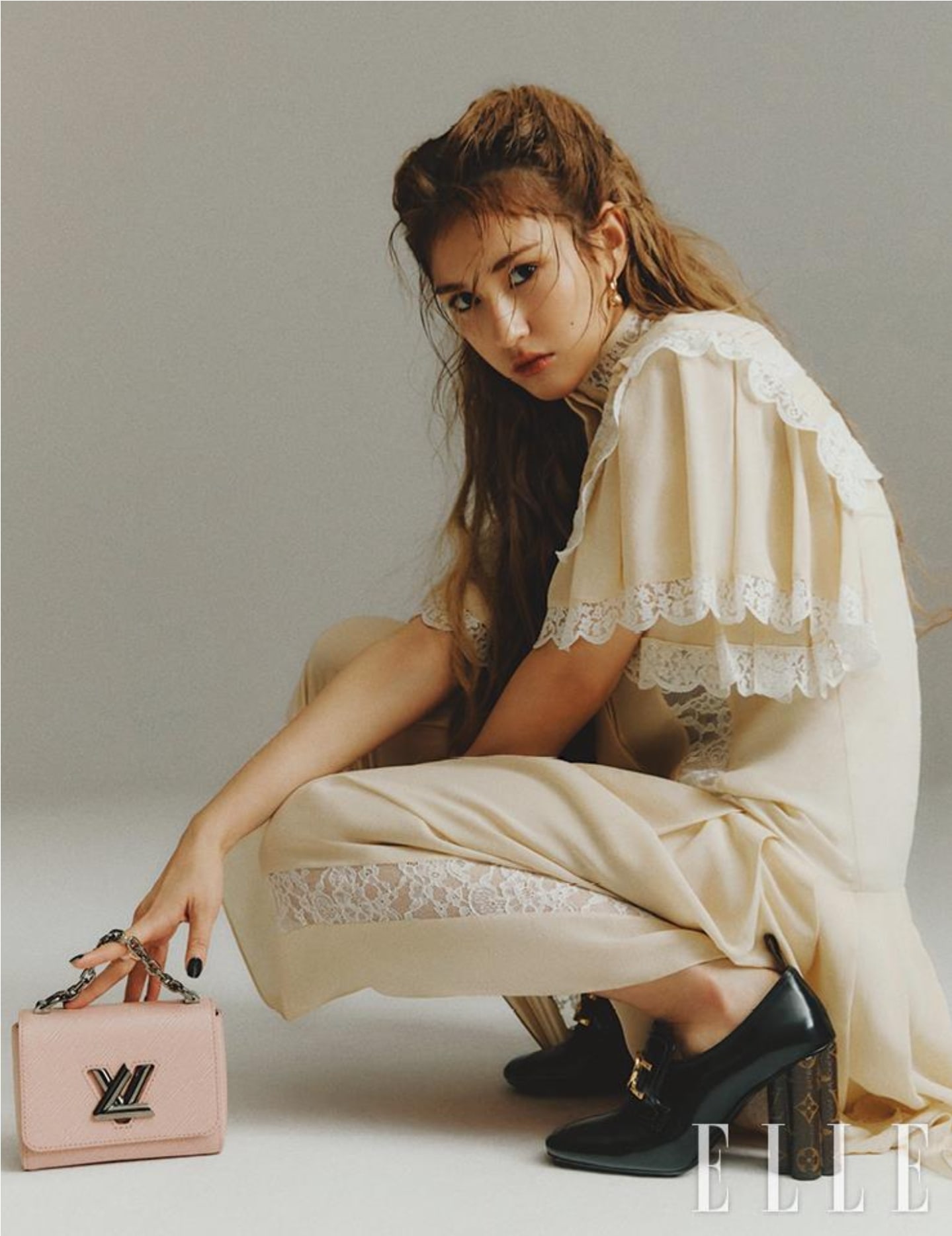 Somi has also taken pictures with advertisements created by fans for her birthday, proving her dedication to her fans. She said that when she thinks of the effort fans put into making videos, she finds it amazing and cute. “Although I can’t go find each place, if I’m in a situation where I can go, then I’ll go,” she noted. “I want them to know that I saw the gifts they spent so much energy and money on.”

The singer said that her fans tend to be older than her, as well as most of the people close to her. When asked about the secret to being liked by those older than her, Somi replied, “I think it’s because I can understand everyone’s various personalities and backgrounds to some degree. When I was working as a member of I.O.I, there were a lot of times when I had to work alone, and I’m a soloist now. I try to approach others while thinking about what they would feel, so I think others tend to trust me a little more and eventually open up to me.” 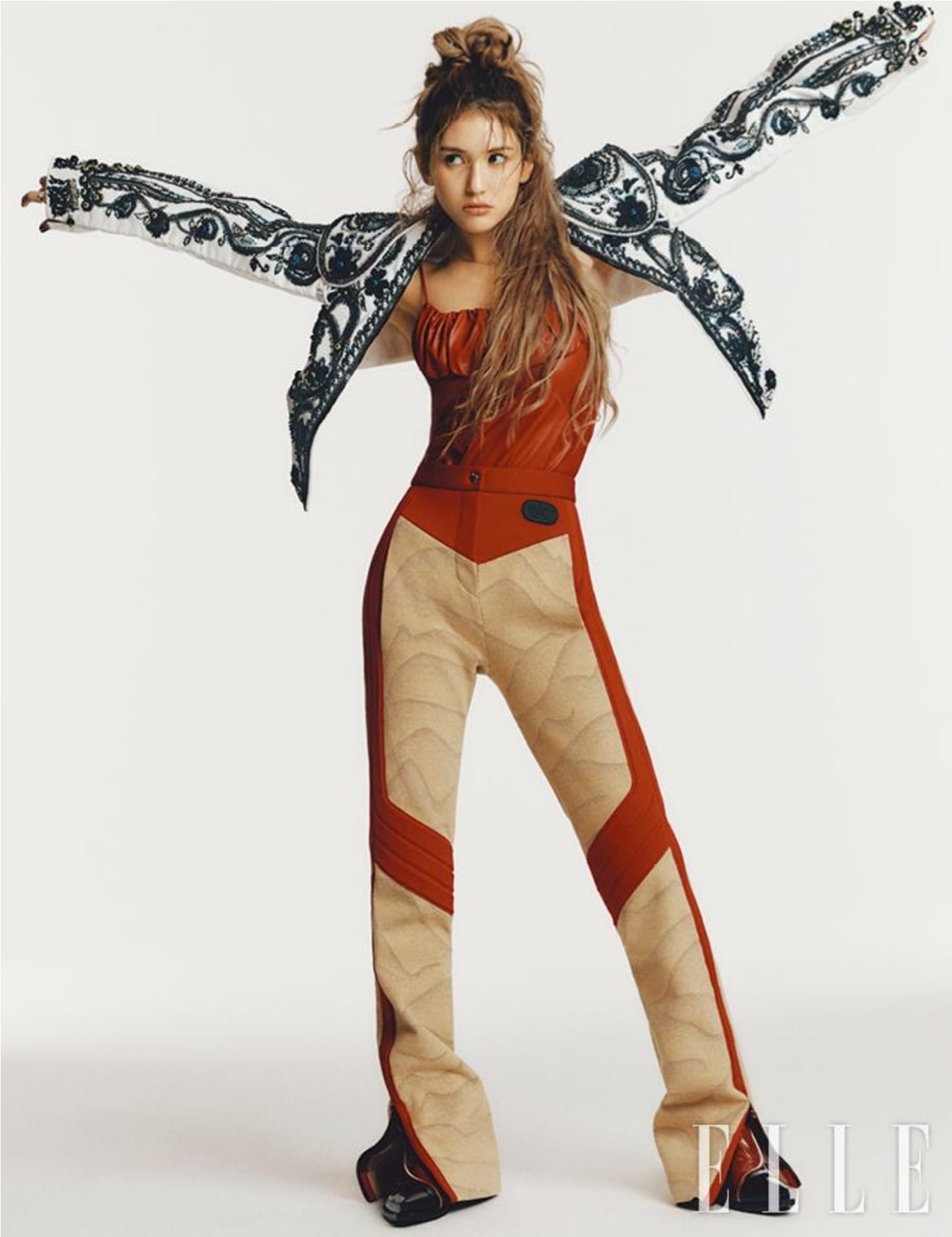 Somi also spoke about the meaning behind both of her names. In Korean, her name is made up of the characters for “bright” and “spread.” Meanwhile, her Dutch name “Ennik” means “sword” or “fighter.” Somi explained that while she has a bright soul, she turns on her “fighter mode” in her everyday life.

Having matured at a fast pace due to her early debut, Somi mentioned that there were times when she ended up consoling adults. “When I feel like that person has been comforted, I feel proud that I’ve become a person that others can rely on, but I also feel kind of pitiful,” she admitted. “I’ve had no choice but to gain a lot of experience after beginning life as a trainee in sixth grade and appearing on shows such as ‘Sixteen’ and ‘Produce 101.'”

Steering the conversation toward music, the interviewer spoke about the pop vibe of Somi’s music and also mentioned her recent contract with Interscope Records in order to make a leap into the American music market. Somi commented on the use of English in her songs, saying, “Everyone is already used to K-pop songs utilizing English and other languages. There were plenty of opinions that using both Korean and English in my songs made them more appealing. It’s also what comes naturally to me, so I want to be more bold in making tracks that give off both a pop song and K-pop vibe.”

Somi also spoke about the importance of practice, citing the “Produce 101” cover of “Bang Bang” as the track that she worked hard on in order to receive recognition for her dancing skills. She quoted miss A’s Jia, who had advised, “When you’re a trainee, practice as hard as you can.” 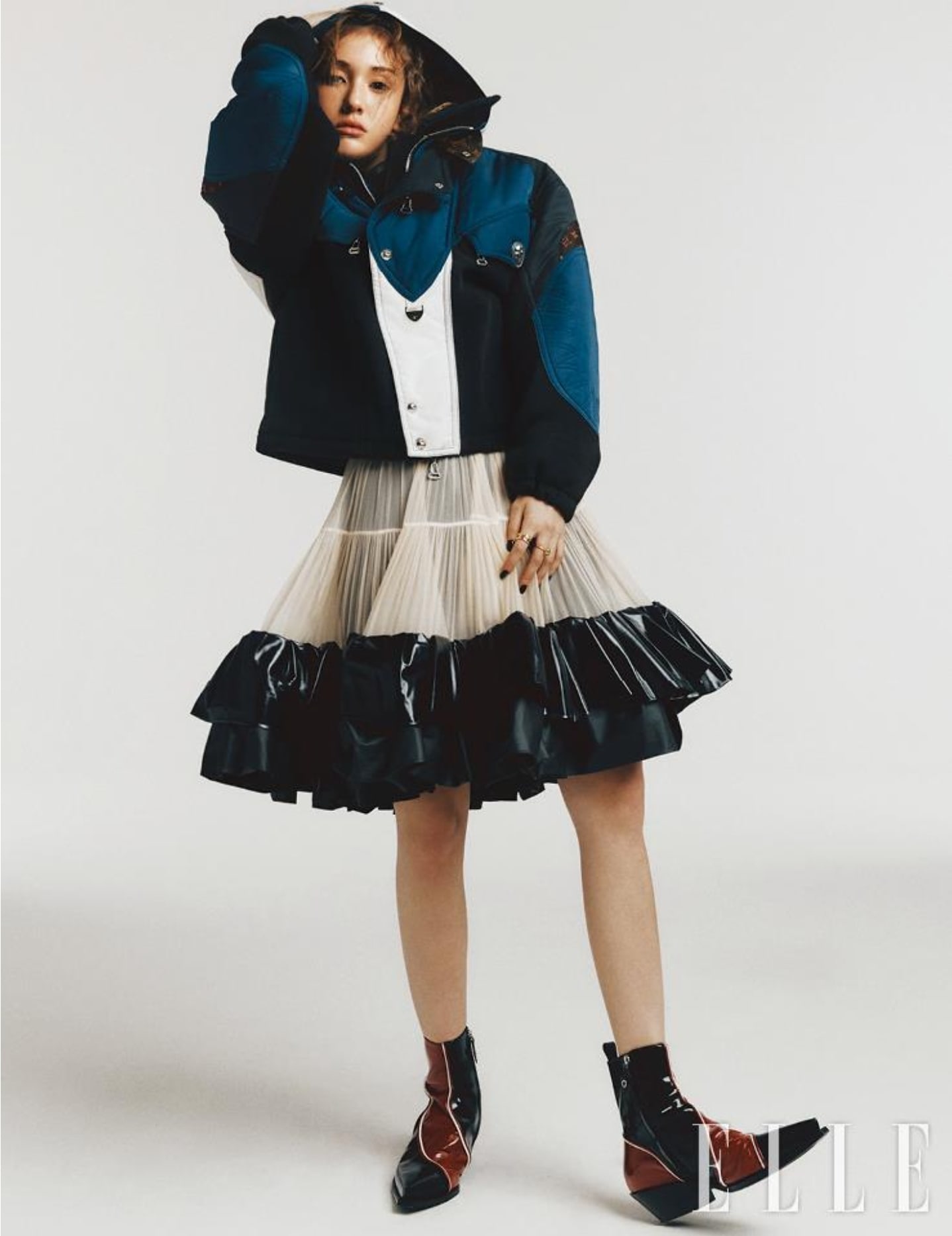 When asked if there were any areas she wanted to improve in as a singer, Somi referenced lyrics from her latest title track, “What You Waiting For.” “I want to improve my low voice, like the voice I use in the beginning of the song that goes, ‘It’s because of you that I’ve come to hate the innocent phone,'” she explained. “I also like falsetto so I want to learn how to connect it naturally as well. I think husky voices are really attractive.”

Somi then talked about studying song composition, saying that she tends to practice making songs on a certain topic instead of studying everything in a slow and steady manner. “I want to make songs with a very specific mood,” she continued. “There’s jazz and R&B songs that are simple but true to the genre. As a solo artist, I want to try experimenting with different genres.”

The interviewer then asked Somi about what inspired her. Somi selected everything that she consumed from a young age, calling it her nourishment. “Thanks to my father, I listened to music from many different countries from a young age, and since my grandmother helped raise me I also listened to a lot of music from her era,” she explained. “I grew up listening to songs on cassette tapes. It was a true cultural experience!”

Somi, who turned 20 in Korean age this year, said she didn’t feel any sense of suddenly becoming an adult. She commented, “Instead, it feels like my scope of expression has widened and I feel a bigger sense of freedom. I always think I’ll do well on my own, so I’ve always disliked the expression, ‘You’re not an adult, so you can’t do it.'” 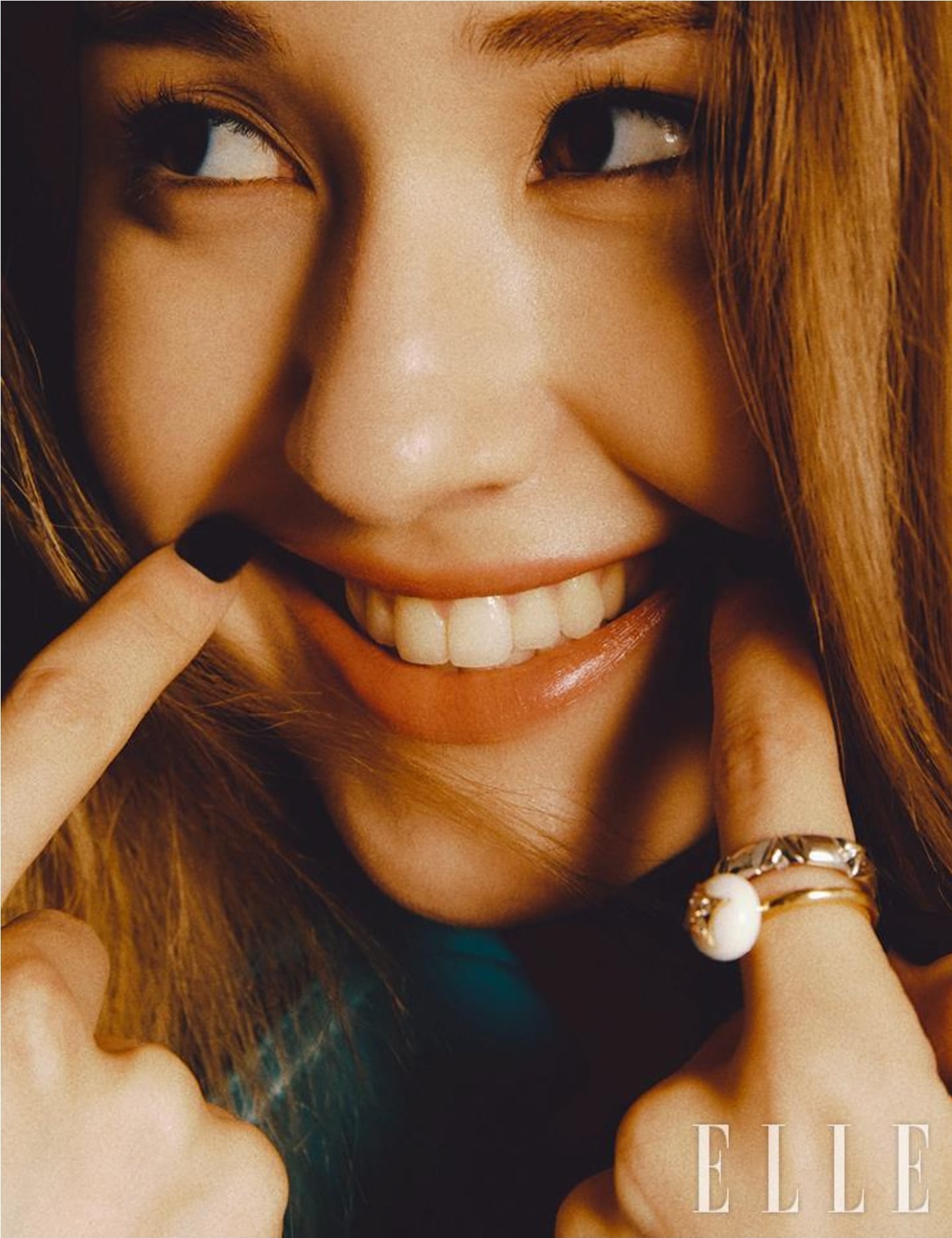 Upon being asked how she hopes to be viewed by others, Somi responded, “I’m always thankful that there have been so many people who have looked after me since I was little. I think I’ll be happy if people support me as if I’m their younger sister who’s going out into the world to make her own music.” She continued to say that while she liked knowing that her first solo track “Birthday” was her own, she couldn’t truly enjoy it due to her skill level. “I worked really hard this time and I think I’ve improved a lot. I’m also working hard on my EP,” she concluded.

The interviewer wrapped up by asking Somi to describe something that definitely belongs to her. “Colorful things! Things with a mix of every color,” Somi replied. “My dream car is a yellow Lamborghini. I want that to be my car, and when people see it I want them to think, ‘Wow, that’s definitely Somi’s car.'”

Somi
Elle
How does this article make you feel?