2020 Asia Song Festival has announced its second lineup of performers for the main stage!

The first lineup included Red Velvet – Irene & Seulgi, Oh My Girl’s YooA, MOMOLAND, Kang Daniel, ATEEZ, iKON, and The Boyz, as well as Japan’s AKB48, Myanmar’s Project K, and Thailand’s Milli, for a total of 22 teams in the full lineup.

NCT’s Doyoung and CLC’s Yeeun will be the MCs for the main stage. 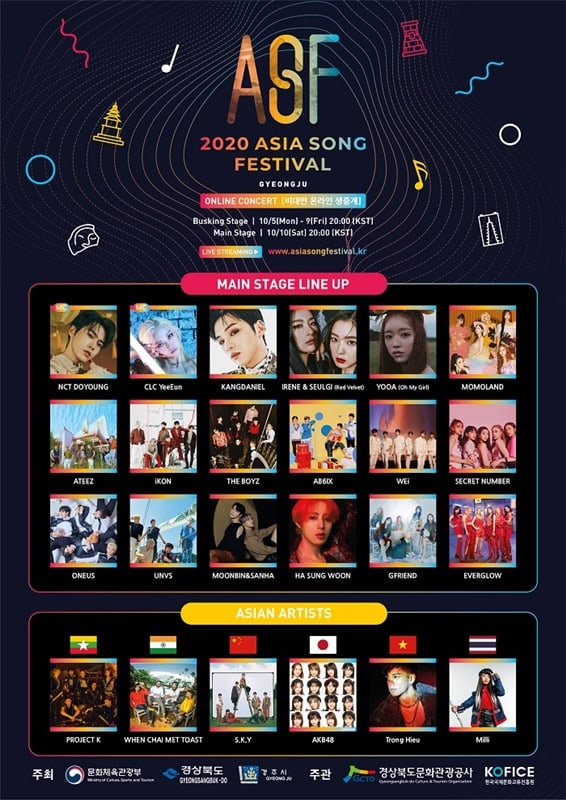 2020 Asia Song Festival has announced their first lineup of performers!

This year’s Asia Song Festival will be held in Gyeongju and will be streamed online.

On September 29, the first lineup was revealed to include Red Velvet – Irene & Seulgi, Oh My Girl’s YooA, MOMOLAND, Kang Daniel, ATEEZ, iKON, and The Boyz.

The main stage, described as a musical festival joined by K-pop artists and other artists from Asia, will take place on October 10 at 8 p.m. KST. The busking stage, which involves K-pop stars performing in front of Gyeongju’s cultural heritage, will be held every day at 8 p.m. KST between October 5 and October 9. Both events will be streamed online through Asia Song Festival’s official website and the YouTube channel “The K-pop.”

Check out a video of the lineup below!