Lee Joon Gi Talks About Reuniting With Moon Chae Won In “Flower Of Evil,” The Most Memorable Scene For Him, And More

Lee Joon Gi sat down to talk about why he admires Moon Chae Won, the secret behind his scenes in “Flower of Evil,” and more in a recent interview!

Lee Joon Gi and Moon Chae Won’s hit tvN drama “Flower of Evil” recently closed with a successful finale on September 23. The drama is about a detective (Moon Chae Won) who begins to suspect her perfect husband (Lee Joon Gi) of being a serial killer.

In the interview, Lee Joon Gi shared that he had been keeping in touch with “Criminal Minds” co-star Moon Chae Won even before joining “Flower of Evil.” He said, “We met a few times before and talked about things like life and what projects we’re thinking about.”

He went on to explain that Moon Chae Won had given him the courage to take on “Flower of Evil.” Lee Joon Gi said, “When I was having a lot of thoughts about deciding to join ‘Flower of Evil,’ Chae Won said to me that I’d be able to make my character completely charming, and I was able to become more confident once she told me that.”

Lee Joon Gi had nothing but praise for Moon Chae Won. “On the set, actress Moon Chae Won is detailed and very focused,” he said. “She’s an actress who really thinks about her role until she can interpret the emotions. That’s why she helps me out and makes feel more inspired about the emotional aspects when we work together.” 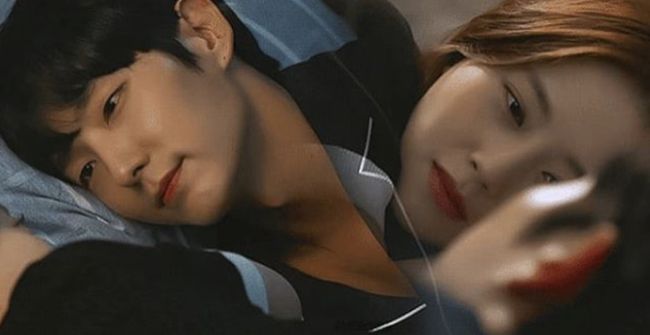 Lee Joon Gi added, “Thanks to Cha Ji Won, I was able to feel Do Hyun Soo’s emotions more strongly.”

He then mentioned that Moon Chae Won must’ve been exhausted by the drama after portraying her character and all of Cha Ji Won’s emotions. With a laugh, Lee Joon Gi said, “She worked hard, and I should buy her something delicious to help her recover.”

Lee Joon Gi chose a scene from “Flower of Evil” that stood out to him. “The scene I remember the most is when Hyun Soo realizes his feelings for the first time and starts sobbing,” he said. “The director and I agonized over this scene even before we portrayed it. That part was something that had us so stumped the more we thought about it that we even talked for close to an hour during rehearsal.”

He continued, “If we failed to control the pace of the story and didn’t convince the viewers, we would’ve ruined the entire flow of emotions that we had created so far.”

Lee Joon Gi also shared his secret to acting out the crying scene when he’s told that Cha Ji Won has died. “As I was wondering how to portray Hyun Soo who has lost Ji Won, I suddenly thought of a howling beast that licks its dead child,” he said. “I wanted to portray Hyun Soo’s sense of loss as everything falls apart in the most primitive way of crying, and afterward, Hyun Soo became a beast that can’t be controlled.”

After wrapping up “Flower of Evil,” Lee Joon Gi is currently looking for his next project.

Check out “Flower of Evil” on Viki!