Instead of MBC’s biannual “Idol Star Athletics Championships,” which could not be held indoors due to social distancing guidelines during the COVID-19 pandemic, the network aired two stand-alone idol competition shows over the Chuseok holidays. After an eSports event the day before, the dog agility competition aired on October 2!

UP10TION’s Kim Woo Seok’s Pomeranian Ddadda was the youngest canine athlete on the show, at only 10 months old. (G)I-DLE’s Shuhua brought her poodle Haku, while LOONA’s Heejin and Choerry appeared with their dogs Tori and Haengoon. Soloist Yubin joined the competition with Kongbin, GOT7’s Youngjae took part with Coco, and MAMAMOO’s Moonbyul brought her three corgis Daebak, Haengoon, and Keongang.

The dog-agility competition featured the pets taking on an obstacle course while guided by their owners. Ahead of the first preliminaries, Kim Woo Seok said, “I’m going to do my best.” Soobin said, “This is the first time Lucky’s been on camera.”

Kim Woo Seok’s dog Ddadda passed by the tire obstacle and so he couldn’t receive the 20 bonus points, but he sped through the course. Kim Woo Seok’s team earned 100 points, completing in 15.72 seconds. 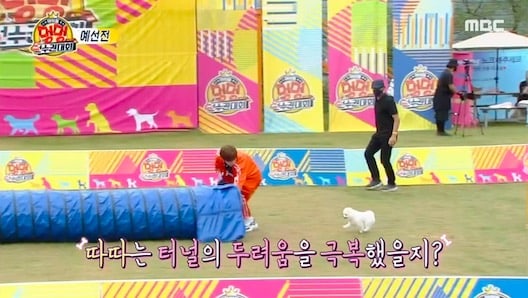 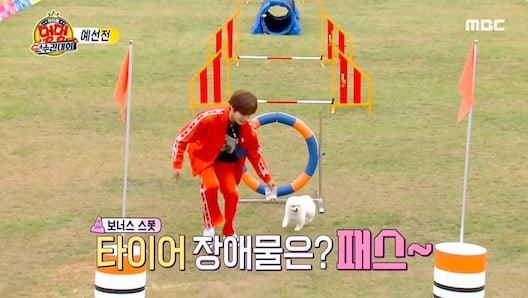 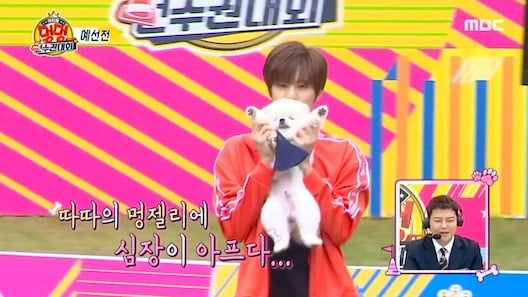 On the other hand, free-spirit Lucky left the course to mark his territory, meaning Soobin had to try to chase after him and the team was disqualified. 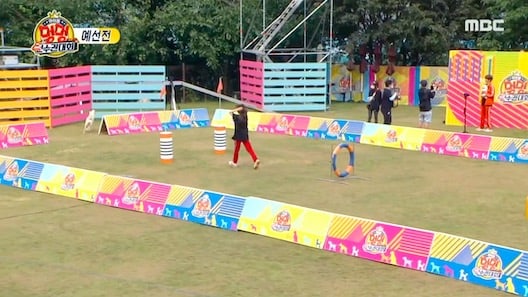 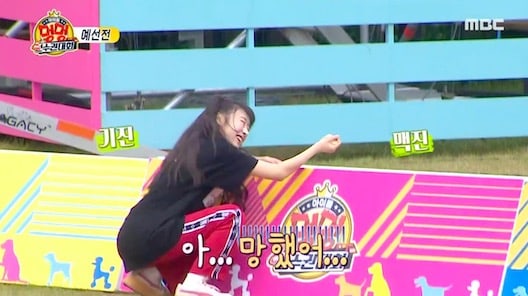 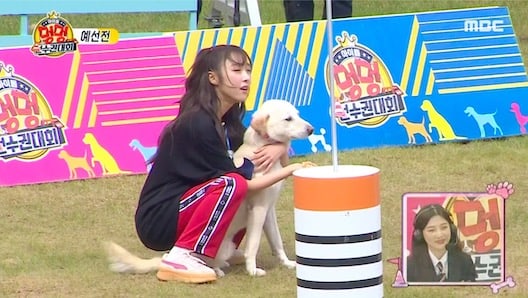 The second preliminaries included Jaehyun and Bonggu, Bomin and Joy, and Yubin and Kongbin.

Bomin said, “My mom trained Joy. She said that all we need is for me to do a good job.” Joy couldn’t make it through the tire but finished the course and grabbed 100 points (14.80 seconds). 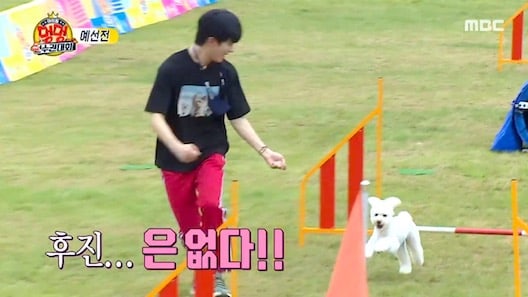 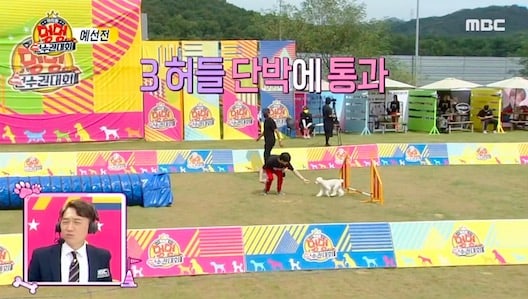 Yubin’s energetic Kongbin went outside the course but zoomed speedily to the end, earning 100 points (8.21 seconds). 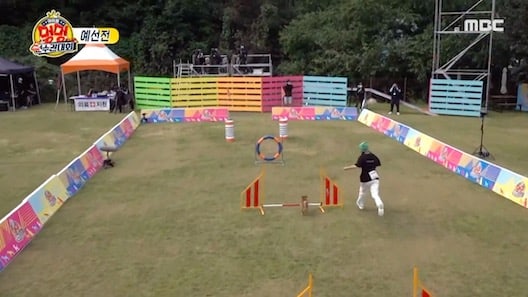 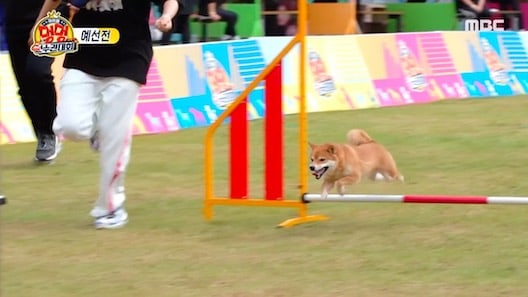 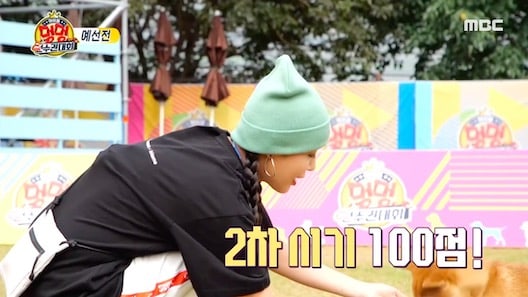 Jaehyun’s Bonggu toddled through the course slowly but successfully made it to the end, grabbing 100 points (2 minutes, 41.98 seconds). 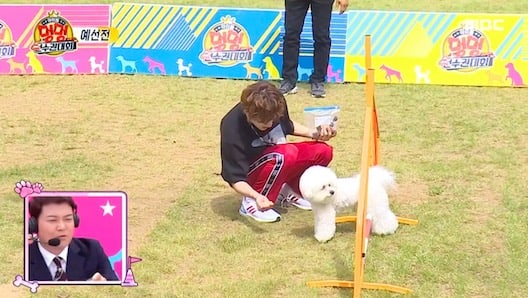 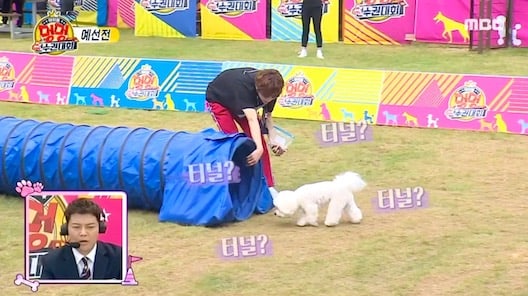 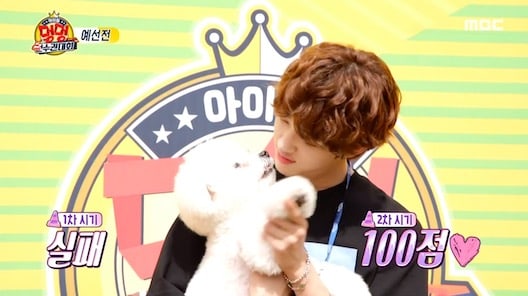 In the third preliminaries, Moonbyul’s Keongang showed better focus than expected. The team managed to clear the tire that earned them 20 bonus points. All together, Keongang received 120 points (10.17 seconds). 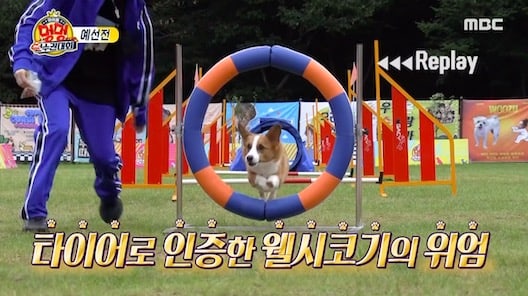 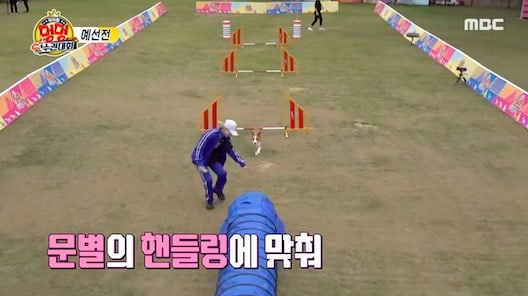 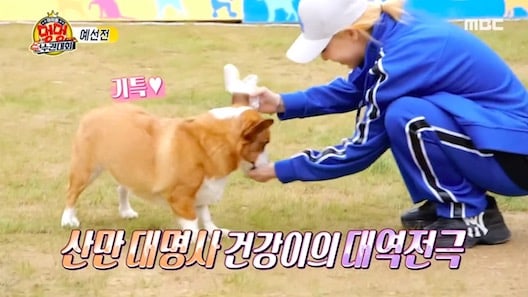 Jisoo’s Rocket, who was described as the competition’s ‘dark horse,’ put on a fierce fight in the second attempt. Rocket took 90 points (46.89 seconds). 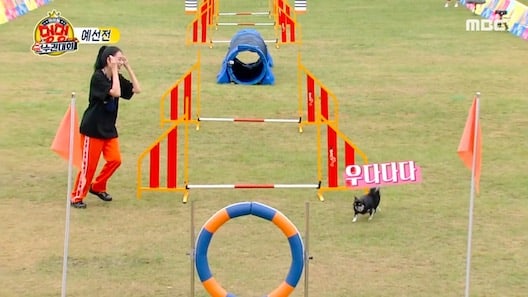 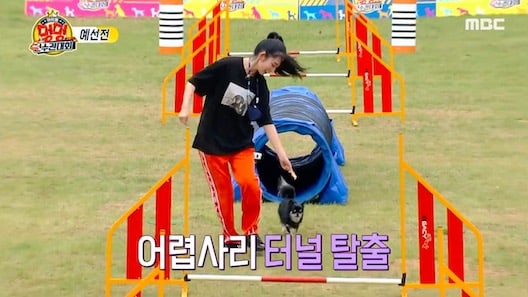 The fourth preliminaries featured Youngjae’s Coco and Choerry’s Haengoon. Youngjae described Coco as his “whole life.” The team struggled as Coco kept getting distracted and going to relieve herself, and Youngjae explained, “I think Coco’s acting like that because it’s an unfamiliar place. She often marks her territory.” Eventually, the team withdrew from the competition. 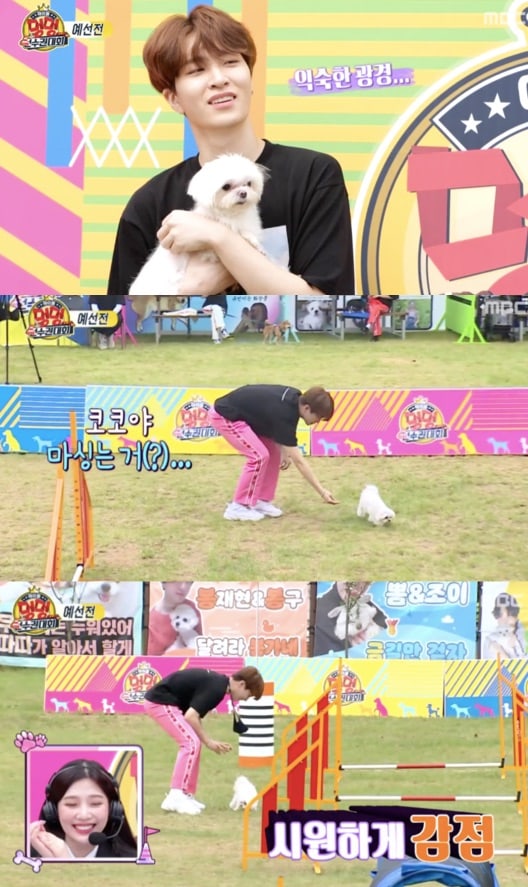 Choerry shared that Haengoon’s previous owner had adopted the dog thinking he was a Pomeranian, and then abandoned Haengoon when they realized he was a mix. “I’m going to use this competition as a chance to give him more love,” she said. Haengoon ended up receiving 100 points for a 9.96-second run, showing a quick speed and good teamwork with Choerry. 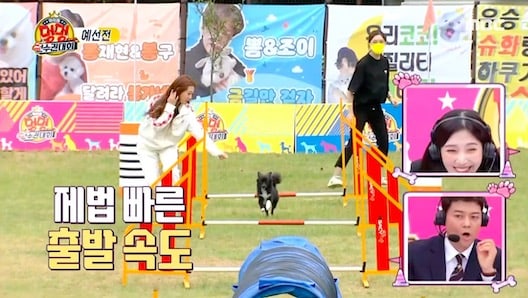 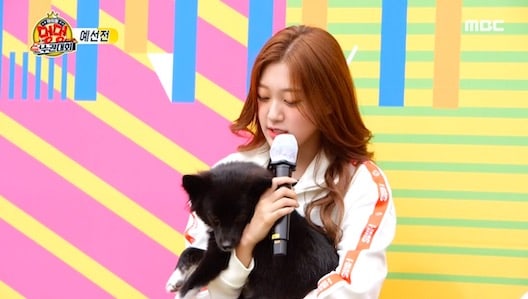 The fifth preliminaries included Heejin and Tori versus Shuhua and Haku. Heejin shared that Tori had been an abandoned dog. While he was timid, he was very active during the agility competition. Unfortunately, he couldn’t make it over the hurdles, but Heejin gave him a lot of love. “Tori is usually good at this,” she said. 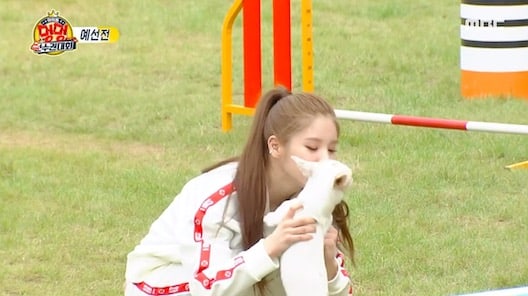 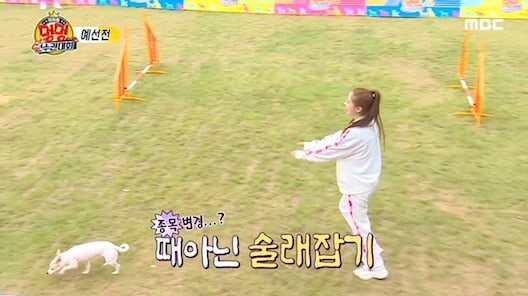 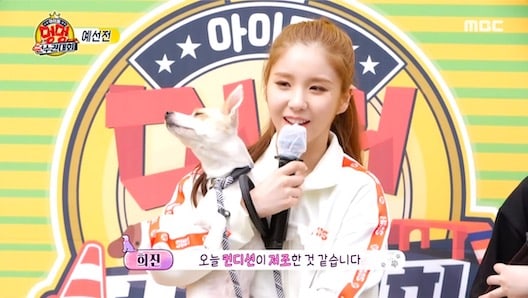 Haku seemed to be a potential winner based on the timing of the team’s first try and earned 120 points for a 10.82-second finish. Shuhua said, “I’d predicted a good score.” 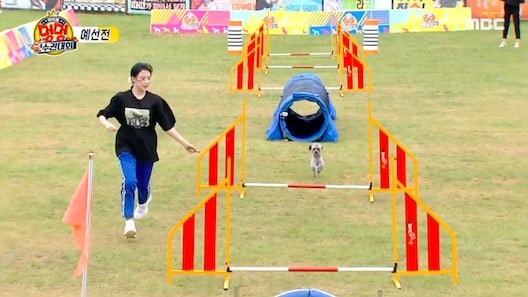 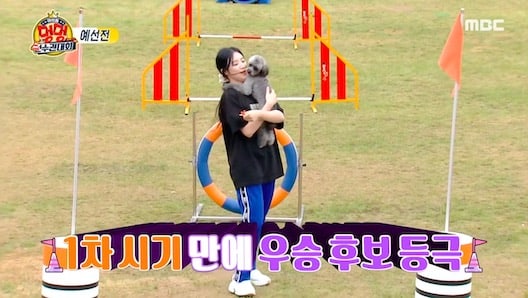 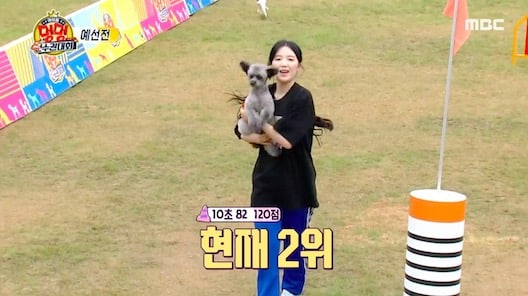 Moonbyul’s Keongang had completed the course in 11.46 seconds, which was 5 seconds faster than Shuhua’s Haku, and so they were crowned the winners. 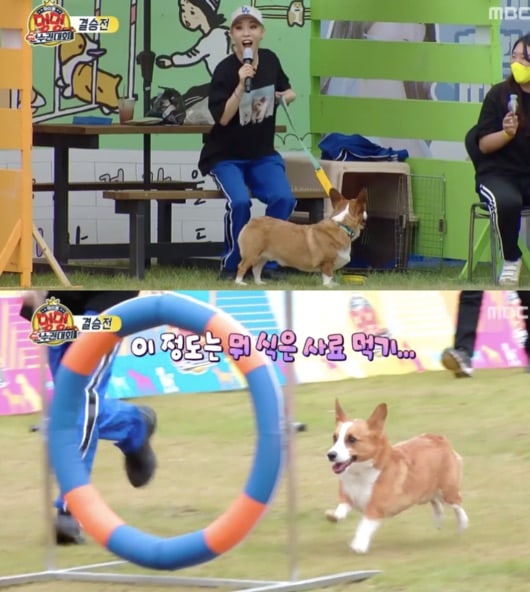 After their win, Moonbyul said, “I think I might cry” and expressed her thanks to her supportive fans and MAMAMOO members. “Thank you for making a memory for us,” she said. As their prize, 300 kilograms (approximately 660 pounds) of dog food was donated to a shelter for abandoned dogs in their names. 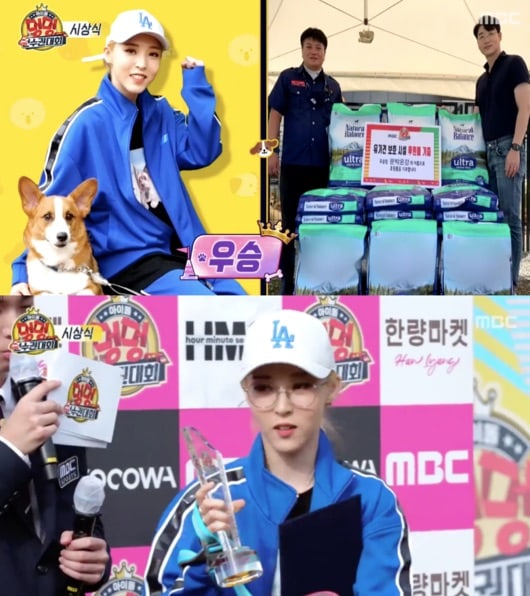 “2020 Idol Star Dog-Agility Championships – Chuseok Special” will be available on Viki. Watch a teaser below!