Lee Seung Gi and ASTRO’s Cha Eun Woo teamed up for a passionate duet on the latest episode of “Master in the House”!

On the October 4 broadcast of the SBS variety show, the cast met with their newest master—veteran actor and legendary ballad singer Im Chang Jung.

Before Im Chang Jung’s arrival, the production staff gave the cast members hints about the identity of their new master, including the question: “Are there any songs that you listened to a lot after a breakup?”

Lee Seung Gi was unable to hide his smile when Cha Eun Woo replied, “[Lee Seung Gi] hyung’s songs,” and he giddily urged the ASTRO member, “Name a few.” However, Cha Eun Woo went on to crack up the entire cast by accidentally getting the name of his song “You in My Memories” wrong.

Kim Dong Hyun then chimed in, “I also really like Seung Gi’s song ‘Delete.'” But when he attempted to sing a snippet of the ballad, he was hilariously unable to remember either the lyrics or the tune, leading Lee Seung Gi to laugh, “I thought you said you liked this song!” Later, as Kim Dong Hyun struggled to recall the melody while trying to hum the song, Cha Eun Woo and Lee Seung Gi both exclaimed at the same time, “[That’s not ‘Delete,’] that’s the tune to ‘Because You’re My Girl’!” 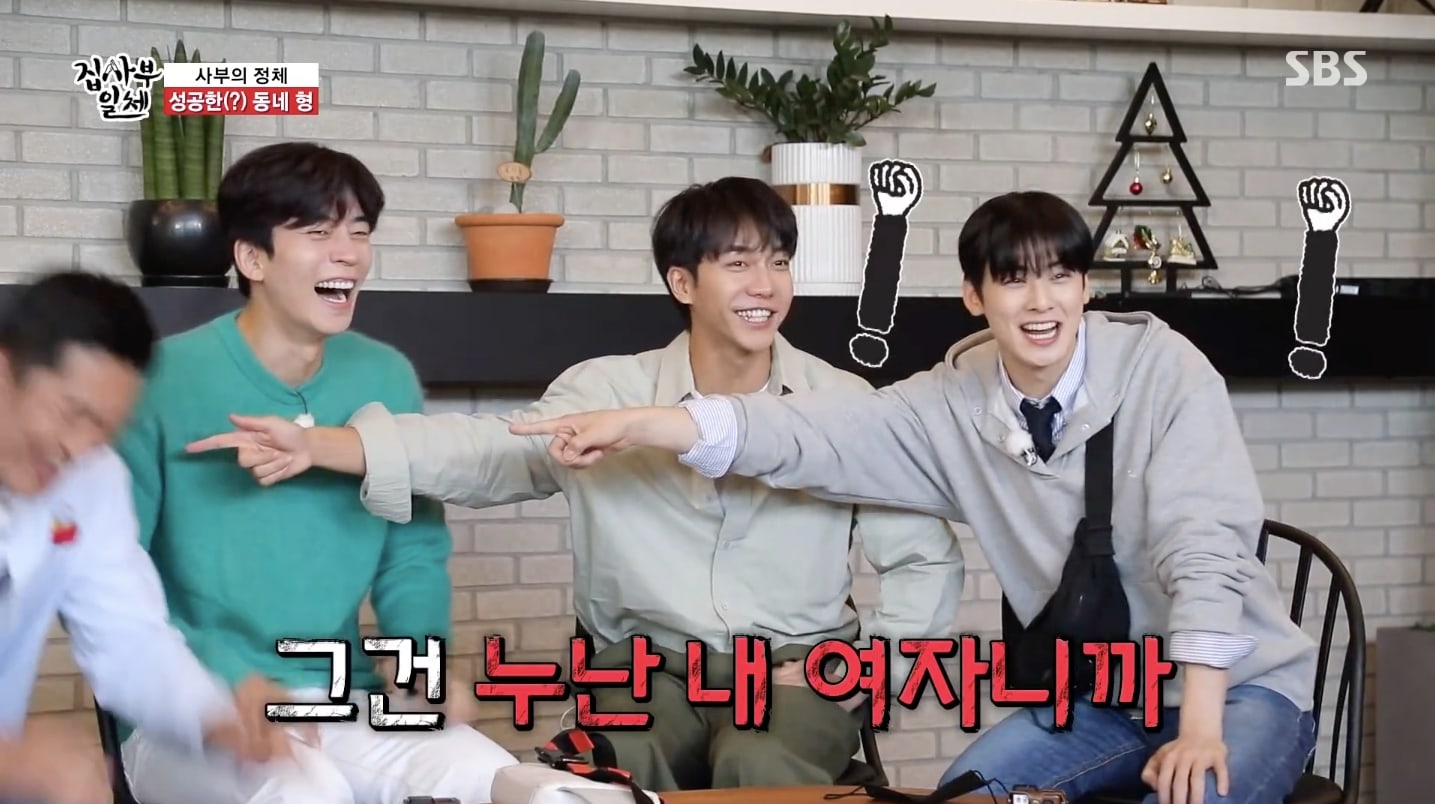 Shin Sung Rok went on to bring up Emerald Castle’s famous ballad “Footsteps,” leading Cha Eun Woo to interrupt Shin Sung Rok by bursting out into the song’s chorus. Lee Seung Gi playfully stopped him from singing by saying, “Let’s let Sung Rok sing. He’s clearly trying to get in the mood so he can sing he song.”

However, when Shin Sung Rok actually began singing, Lee Seung Gi mischievously jumped in and started singing “Footsteps” together with Cha Eun Woo instead. As Shin Sung Rok cracked up in disbelief, the two singers turned to one another and belted out a heartfelt rendition of the song in an impromptu duet.

The other cast members commented that they seemed like an actual duo, with Kim Dong Hyun pointing out, “You guys seem like Son Ji Chang and Kim Min Jong from [musical duo] The Blue.” Shin Sung Rok chimed in, “You guys look like [the duo] Yukgaksu,” which led Lee Seung Gi and Cha Eun Woo to start jokingly imitating the choreography to Yukgaksu’s famous song “Heung Bo.”

Check out the clip of Lee Seung Gi and Cha Eun Woo singing “Footsteps” together below! (Their duet begins at 2:16 in the video.)

ASTRO
Lee Seung Gi
Cha Eun Woo
Master in the House
Emerald Castle
How does this article make you feel?