Watch: TWICE Looks Back On Precious Memories, Describes What The Group Means To Them, And More As They Gear Up For 5th Debut Anniversary

TWICE is celebrating their upcoming fifth debut anniversary by gifting their fans ONCE with new videos!

Throughout this week, TWICE has released special clips for their fans as they get ready for their anniversary on October 20. The group made their debut on that date in 2015 with the song “Like OOH-AHH,” and they’ve gone on to become one of K-pop’s biggest girl groups.

In the run-up to their anniversary, TWICE released a video on October 9 titled “ONCE upon a TWICE, 5 Years” in which the members sat down for personal interviews.

During the clip, TWICE looked back on what their debut day of October 20, 2015 means to them. Many of the members described it as a new beginning, and Jihyo said, “After working so hard, we finally debuted. I remember that I cried a lot.” Jeongyeon talked about how it had been amazing when their music was released and she heard her own voice playing on her phone.

Momo laughed and said, “At first, I thought that we hadn’t done well. I thought, ‘Oh no, we didn’t make it.’ But with ‘Like OOH-AHH,’ we received a lot of attention a bit later. That was really surprising for me. I wondered, ‘Are we popular now?'”

When asked what “TWICE” means, Jihyo described a youthful innocence and cheerfulness. On the topic of a memorable time on stage, Jeongyeon named when they received their first Rookie Award. “We were such rookies that we couldn’t perform,” she said. “So that’s what makes that moment so memorable. We were so nervous.” 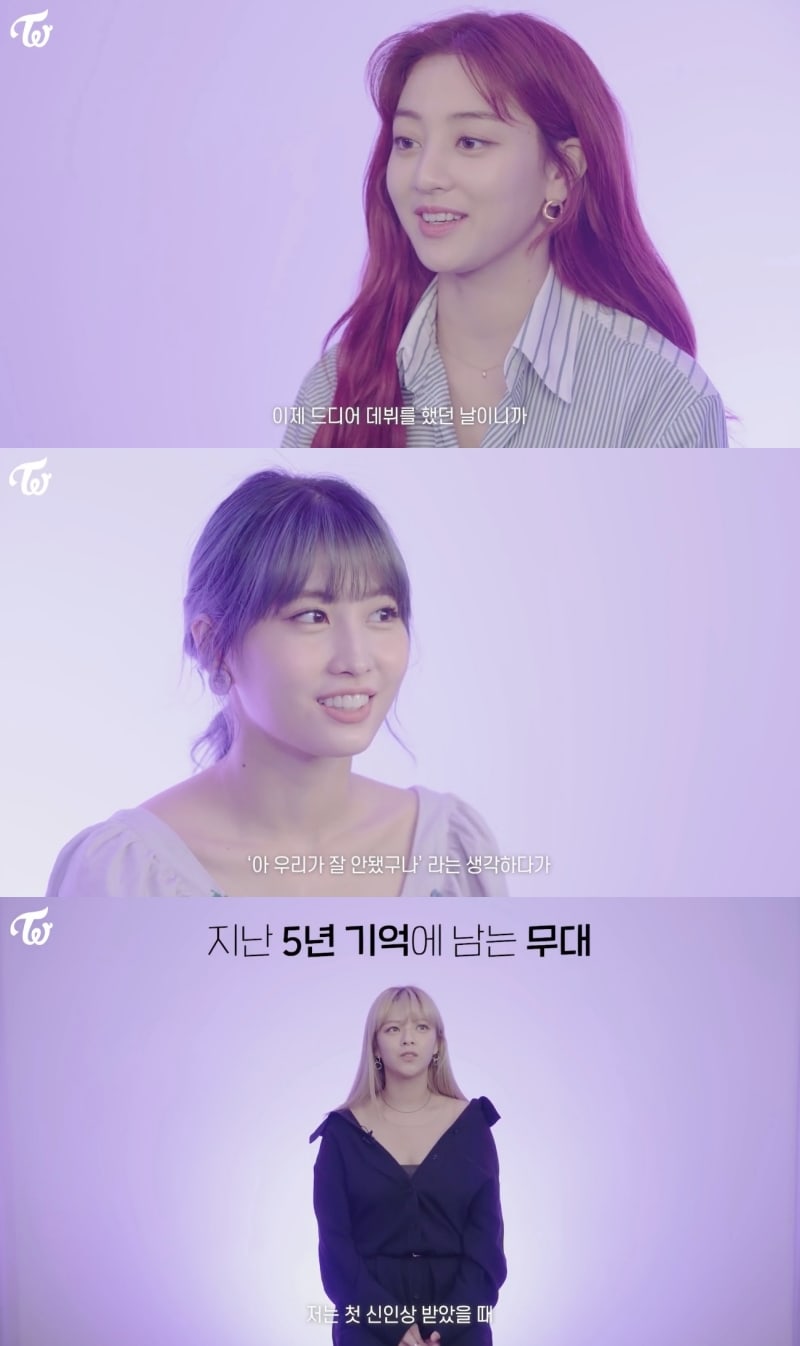 Tzuyu chose their first concert. Mina also said, “We often heard that it’s difficult for a female group to hold their own solo concert. But I think we thought, ‘We really worked hard!'”

Chaeyoung chose their tour “TWICELIGHTS,” as they went to a lot of countries and it was also their first U.S. tour. Jihyo said, “When we won first for the first time!” She described how they had an event afterward, and they cried so much there that their faces were swollen.

Nayeon reminisced about a guerrilla concert they did soon after their debut. “That was really memorable,” she said. “I also have a lot of memories of things like university festivals.”

Sana remembered a time when they performed “Cheer Up” at a university festival. “It was the first time after our debut that I heard cheering like that,” she said. “We were so busy then, but it was such a meaningful moment. I hold that memory very close to my heart.” 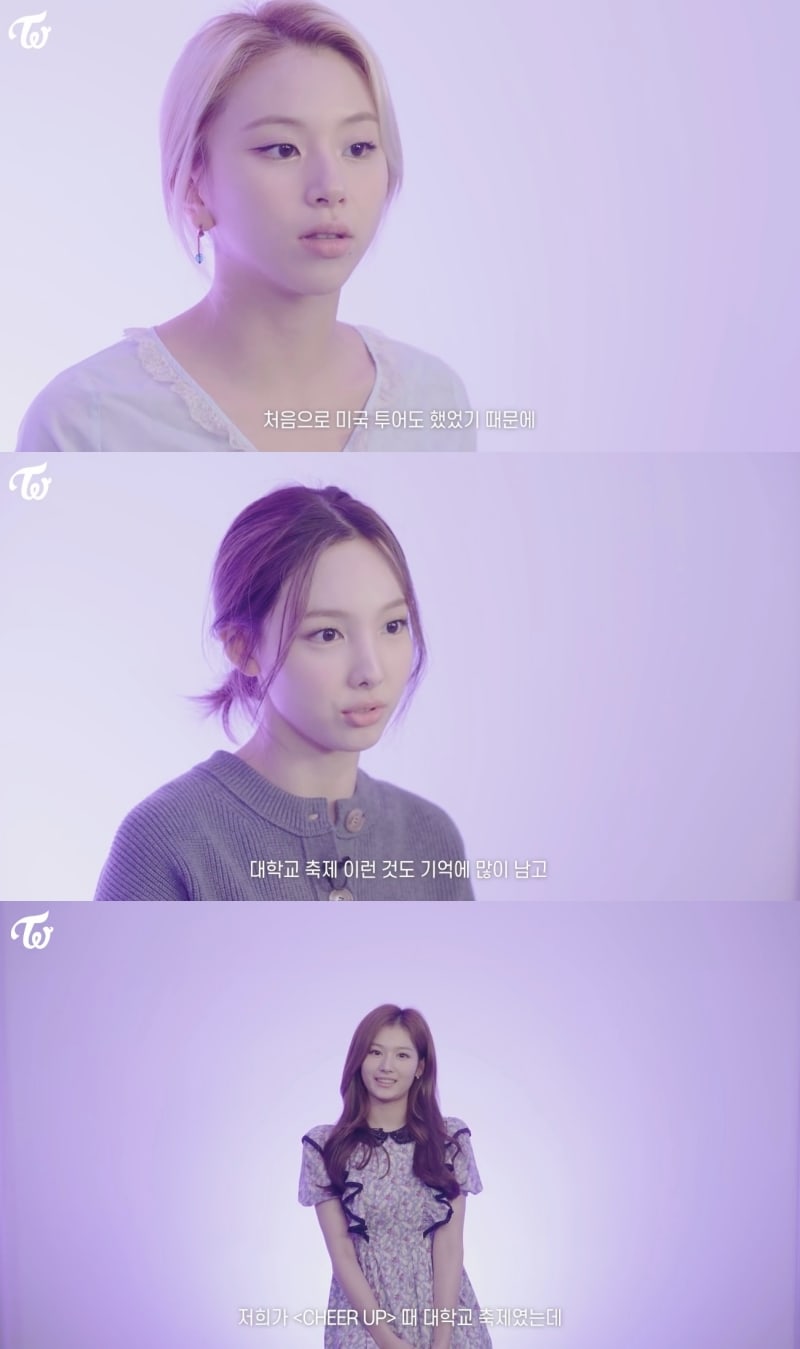 Next, the members were asked to name their favorite song. Tzuyu chose “Cheer Up,” and Mina named “Sunset.” Sana shared that “Feel Special” is now very precious to her, as the song comforted TWICE and ONCEs during a difficult time.

The group also talked about how they’ve changed over the five years. Jeongyeon laughed and said she’s improved at doing cutesy things, and Dahyun said she thinks the whole group has matured. Chaeyoung commented that they’ve gotten better at dealing with crises and hardships.

TWICE went on to discuss success and pressure. Dahyun said that while they feel happy and proud when they’re successful, she also feels pressure to improve with their next album.

Nayeon shared, “I always think that receiving a lot of love at the top isn’t something that will last forever.” She said that while she feels pressure, she tries to keep herself grounded and then she can enjoy what’s happening now.

Dahyun said, “I can overcome it because I’m not alone,” and Jihyo also talked about how since they’ve all been going through things for the first time together, they can help each other.

Mina shared, “When I was taking some time off and getting ready for a comeback, I felt a lot of fear. But that’s when Jihyo said, ‘Let’s do this together. Just start slowly by doing what you can manage.’ I was so grateful when she said that we should do it together.” 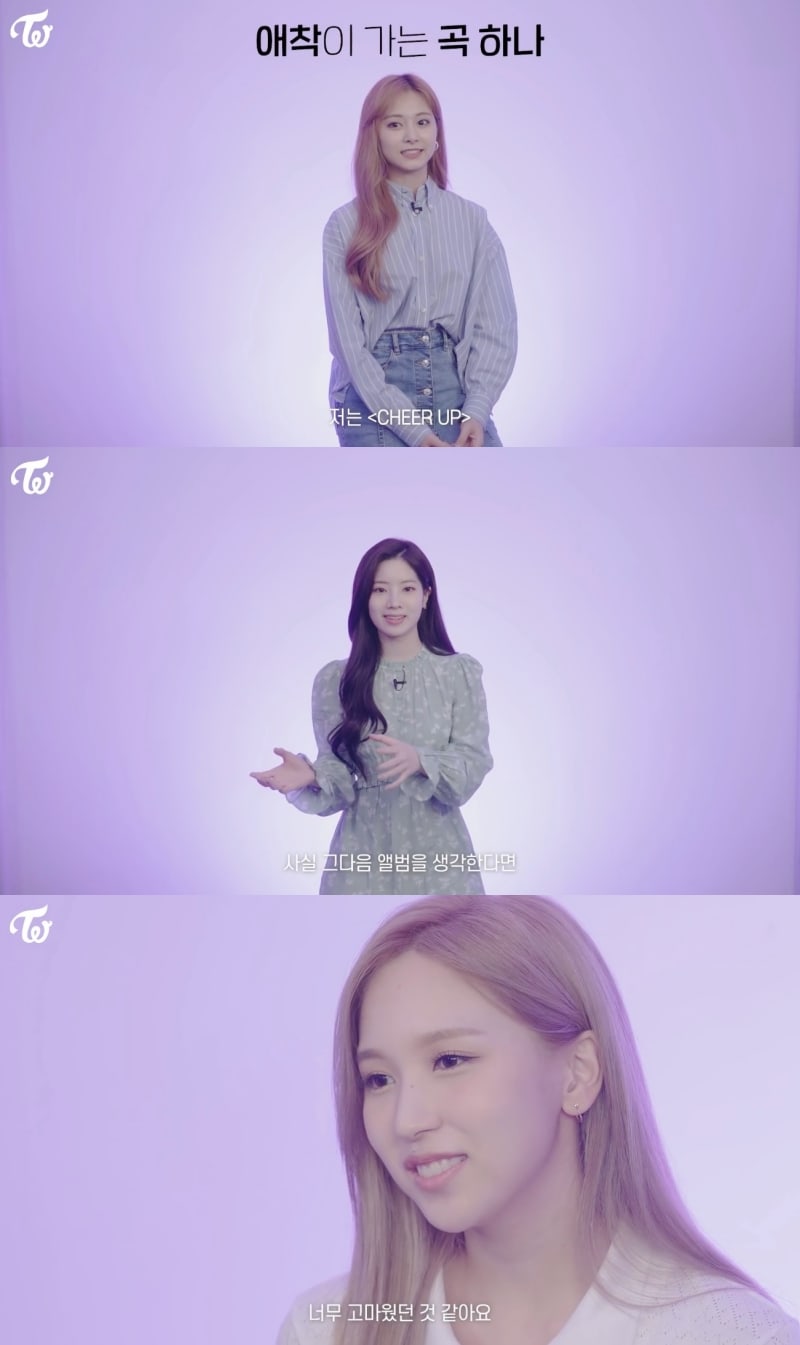 The members went on to talk about their close relationships with each other, how their fans give them strength and energy, and more. When asked what TWICE is to them, Jihyo said, “My biggest dream come true.” Jeongyeon responded, “Inseparable,” and Chaeyoung said, “My rock. My protector.”

Dahyun answered, “What made me who I am today,” and Nayeon said, “It’s totally me. TWICE is me.” Tzuyu shared that she’s experienced so many things for the first time as a member of TWICE and learned a lot, so she feels happy to be a part of the group.

“It gives me confidence and increases my self-esteem,” said Sana. Momo said, “TWICE is the nine of us!” Mina said, “TWICE creates the path that I walk on. I love the feeling like we’re holding hands and walking together.”

TWICE also talked about their hopes and goals for the future and shared messages to their selves five years ago. They went on to each choose a member and conveyed their feelings through special messages for them.

Watch the full video below with English subtitles!

This week, TWICE also released a making-of film for volume two of “TWICEZINE” and videos with messages from the members to their fans.

Watch them with English subtitles below!

As another anniversary gift, TWICE provided a fun throwback with performance clips from their 2017 fan meeting “Once Begins.”

They also shared a behind-the-scenes video from their portrait photo session.

TWICE will also hold a special live broadcast titled “WITH” on October 19 at 10:20 p.m. KST to celebrate their anniversary with fans.

Meanwhile, TWICE is currently getting ready to make a comeback on October 26 with their second full album “Eyes Wide Open.”