IU and T-ara’s Jiyeon got emotional while talking about their longtime friendship on the latest episode of tvN’s “On and Off.”

During the October 10 episode of the reality show, IU paid a visit to her close friend Jiyeon while the T-ara member was practicing at the dance studio. After IU watched Jiyeon dance and praised her skills, the two BFFs headed to Jiyeon’s home to make dinner together.

On the car ride home, IU played Lee Hi’s “HOLO,” commenting, “When this song came out, I related so much to the lyrics. ‘Being alone, staying still, is that so difficult to do? Alone or together, the loneliness is the same.'” Jiyeon then asked, “Be honest. Have you ever cried while listening to a song you related to?”

Watching the footage from the studio, Jiyeon remarked, “There’s something about Jieun [IU’s given name]’s voice that tugs at your heartstrings.” Host Sung Si Kyung chimed in, “She doesn’t even cry, but she’s still good at [making others cry through her music].” Jiyeon added affectionately, “She looks really weak on the outside, but she’s actually very strong inside.” 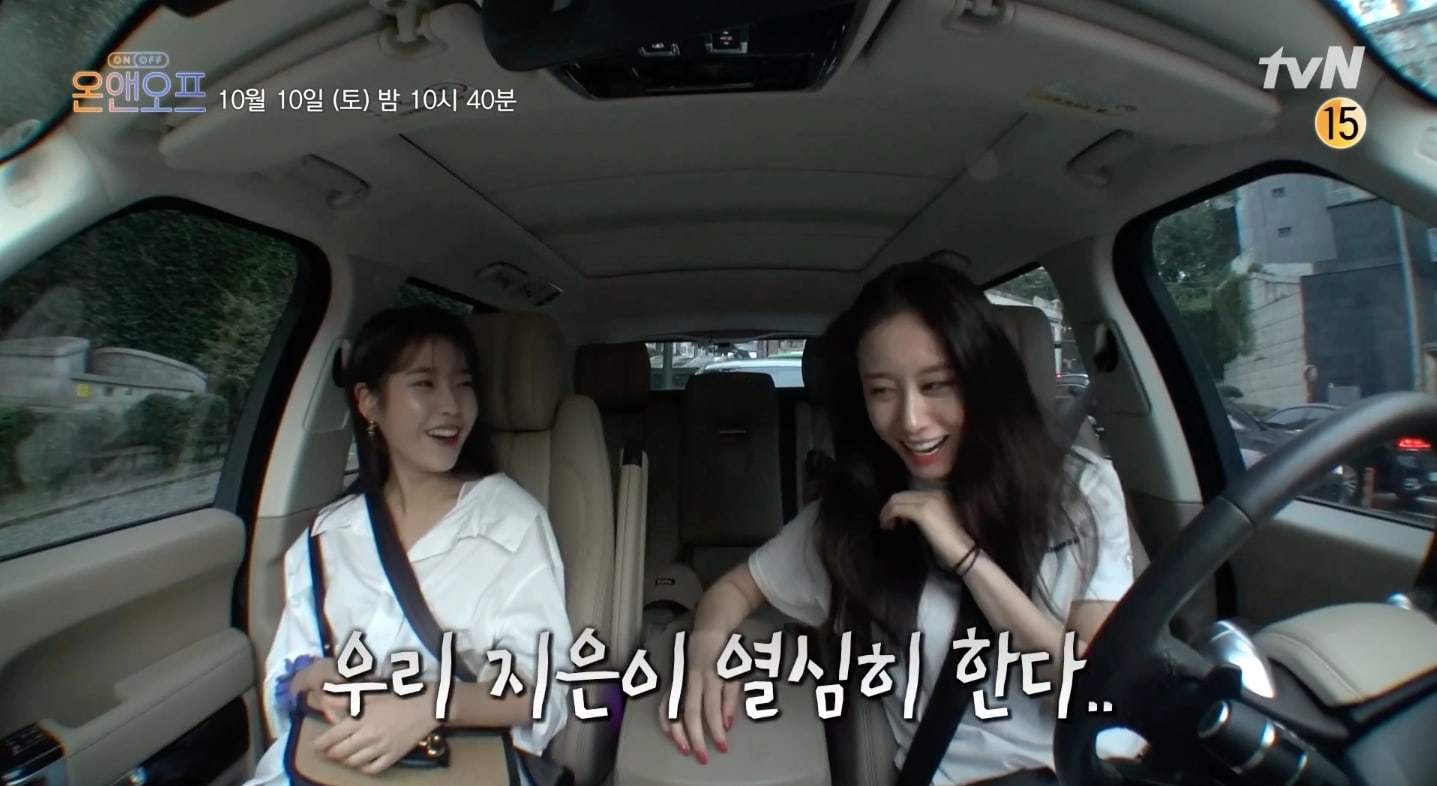 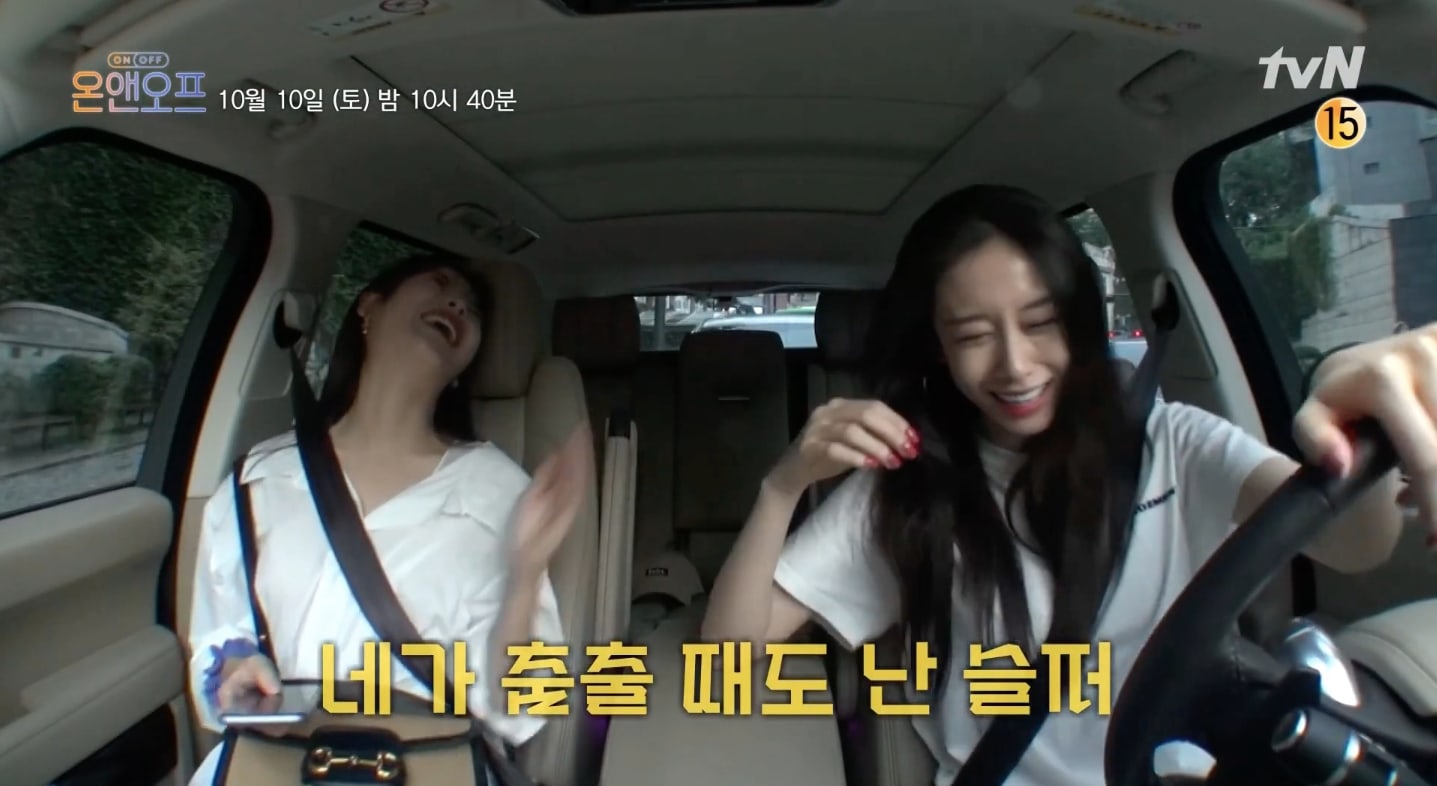 Later, as the two friends were eating dinner together, IU spoke about their long-lasting friendship. “Maybe it’s because we’ve known each other since we were so young,” she said, “but to be honest, even though we actually have far more differences than similarities, we still have this inexplicable bond that goes beyond all that.”

“When we were younger,” IU continued, “I sort of thought of you as a younger sister. Even though we’re the same age, I felt like I needed to take care of you. But at a certain point, as we entered our mid-twenties, that changed.”

IU then grew visibly emotional as she talked about relying on Jiyeon when she was going through a particularly difficult time in her life. “In the past, when I was going through a rough time, I was holding up well and doing a good job enduring it all,” she said, explaining that she had managed not to cry at all. “But the moment I saw your face, I suddenly burst into a flood of tears. I still find that so strange and fascinating.”

Jiyeon immediately began tearing up as she listened to IU speak, and as she passed her a box of tissues, IU laughed, “I’m talking about a time when I was struggling emotionally; why are you the one crying?” 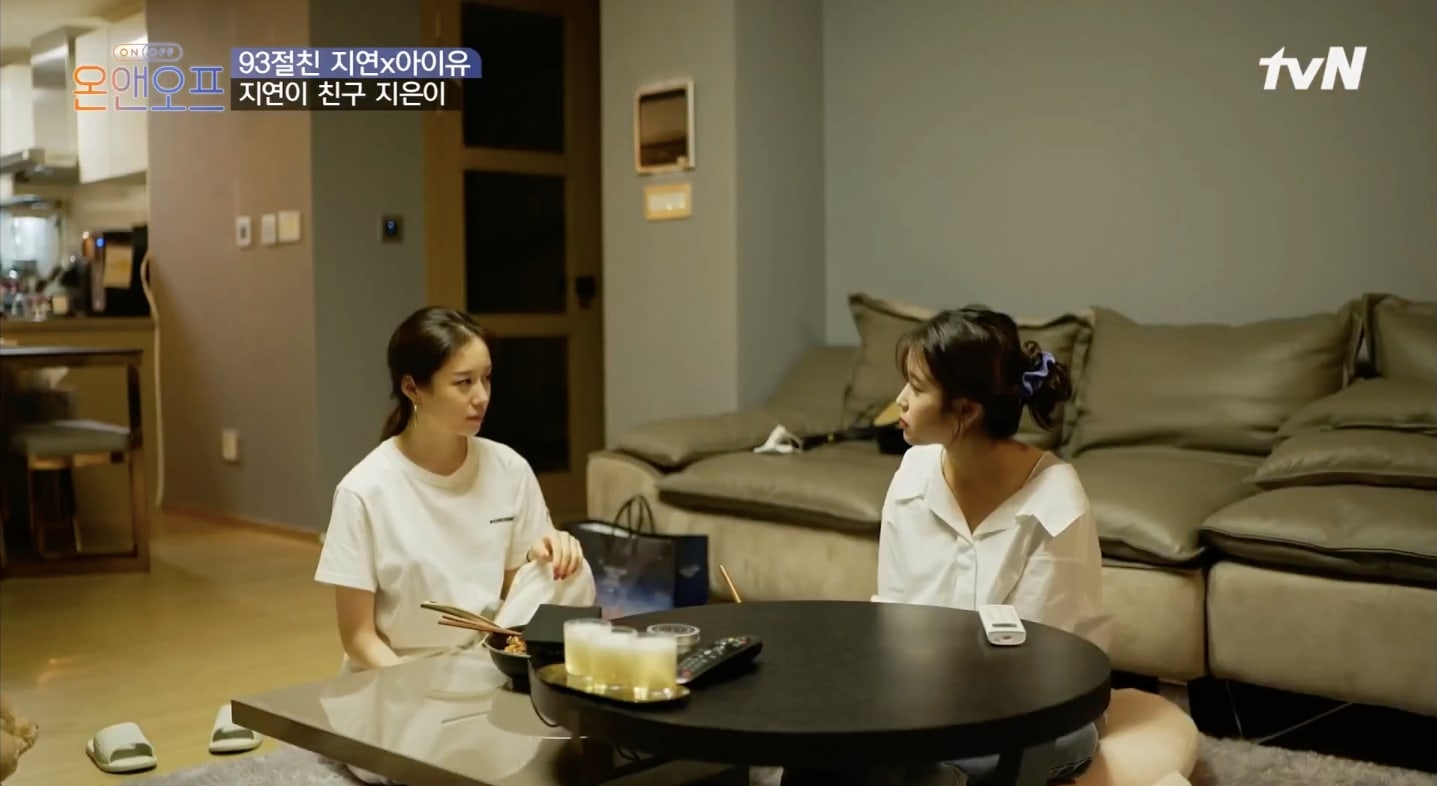 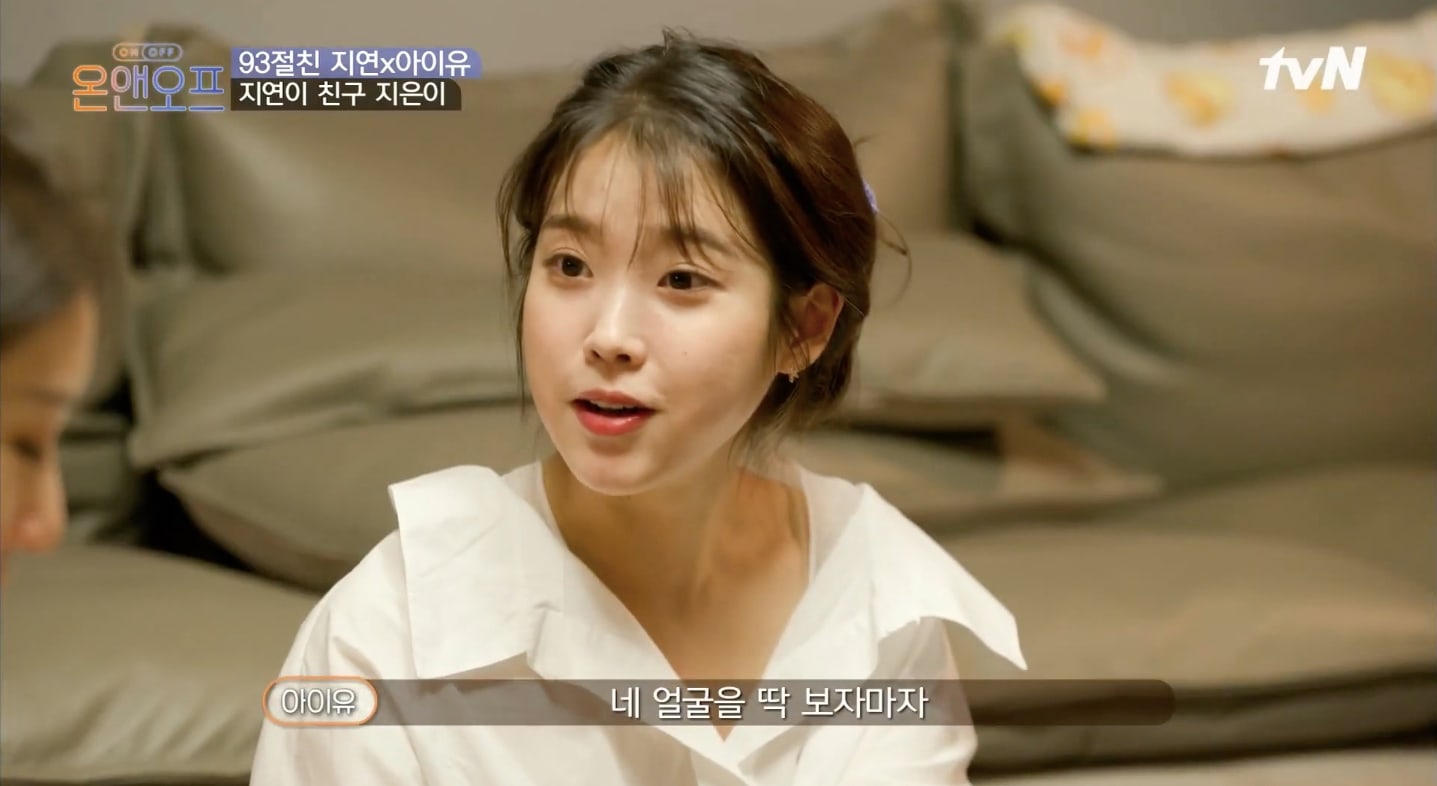 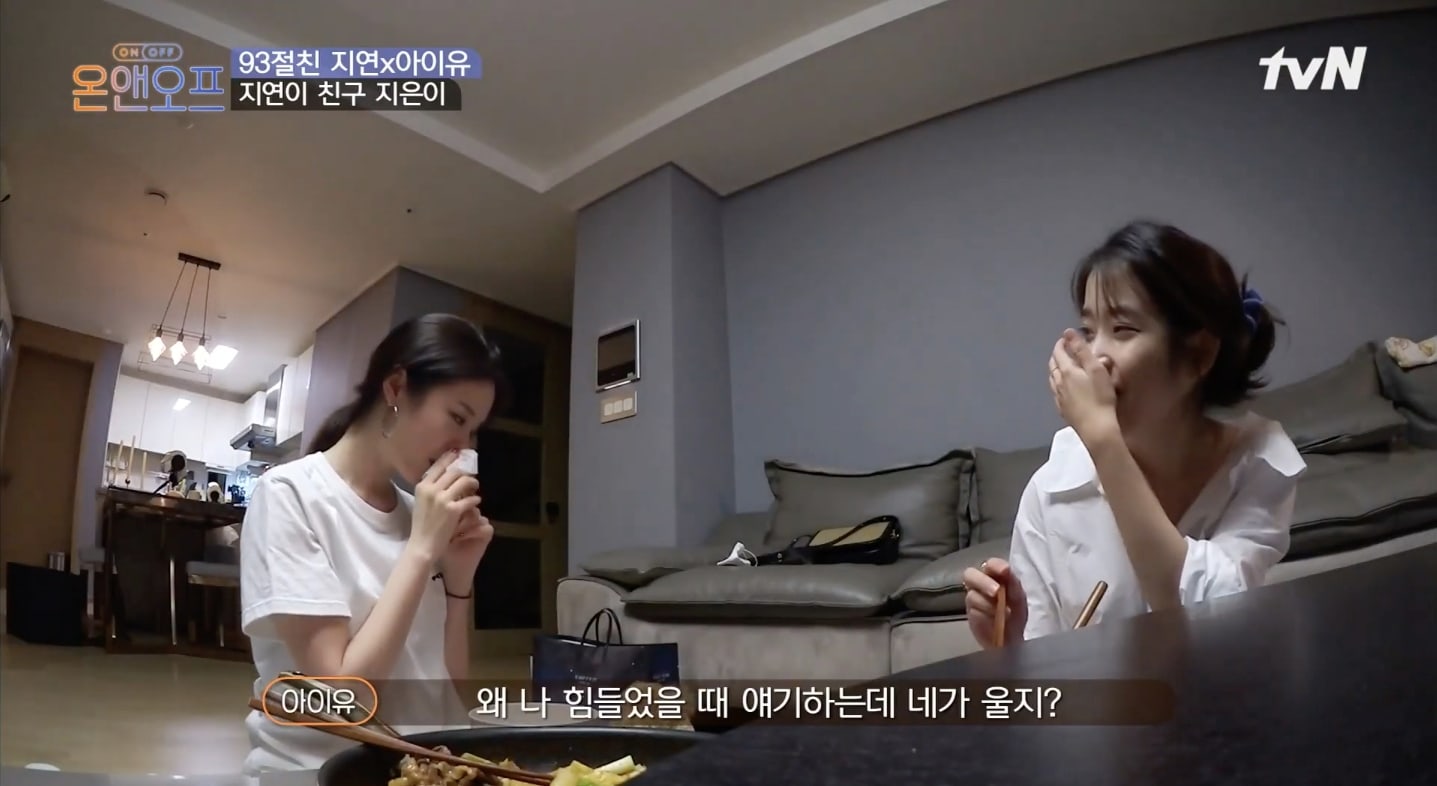 After Jiyeon wiped away her tears, IU asked, “You were surprised back then too, right?” Jiyeon responded, “It’s not so much that I was surprised, but rather, I was so worried about you. Because I’d never seen that side of you before. Whenever we talked about something, I was the only one who cried—never you.”

IU went on to recall, “I had kept my composure, and I thought that I had done a good job achieving stability. But the moment I saw your face, I began crying for the first time. After we held each other and cried together, I suddenly felt for the first time like you were the older sister. I realized that I can really rely on Jiyeon.”

“I still can’t forget that moment,” she added with a nostalgic smile. “That moment when I saw your face.” 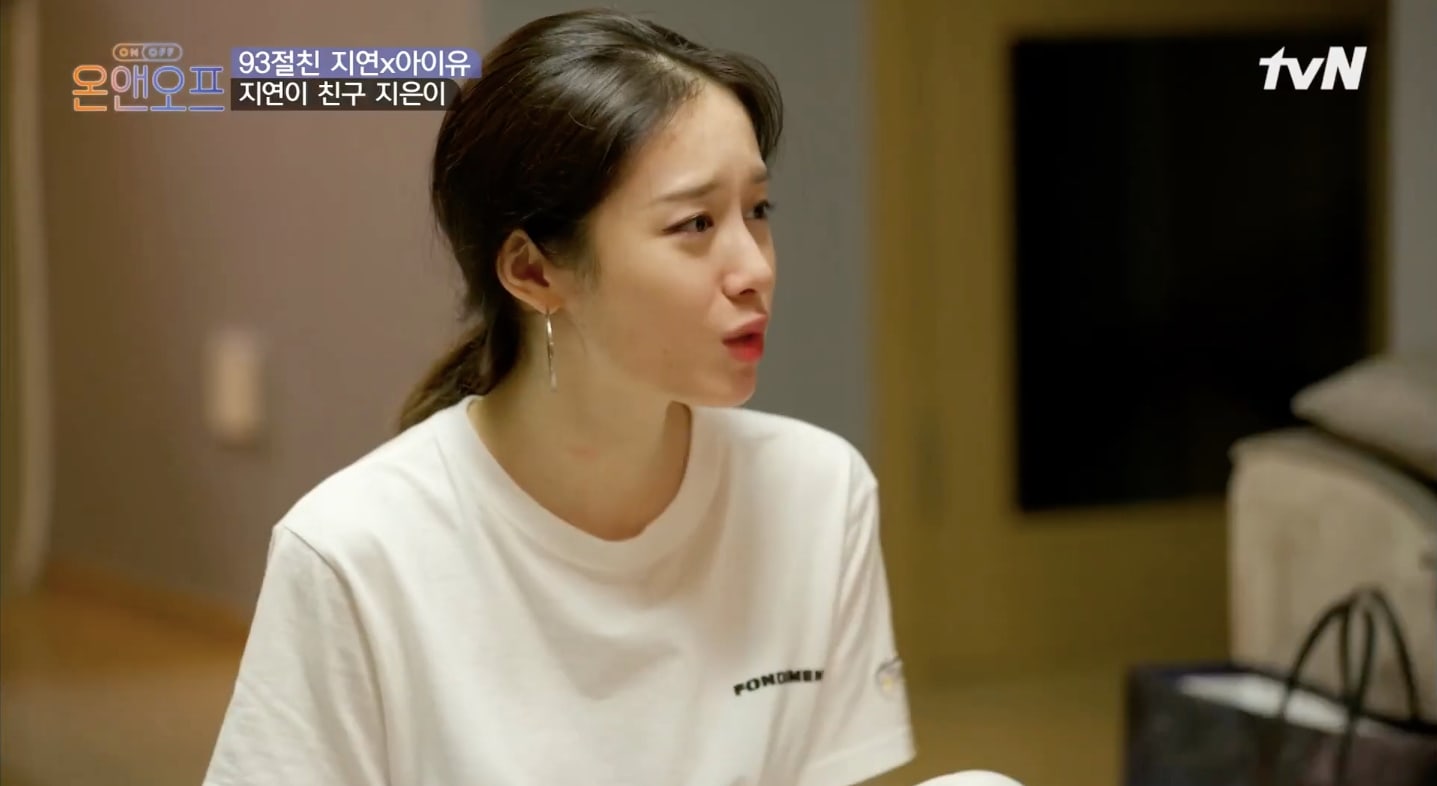 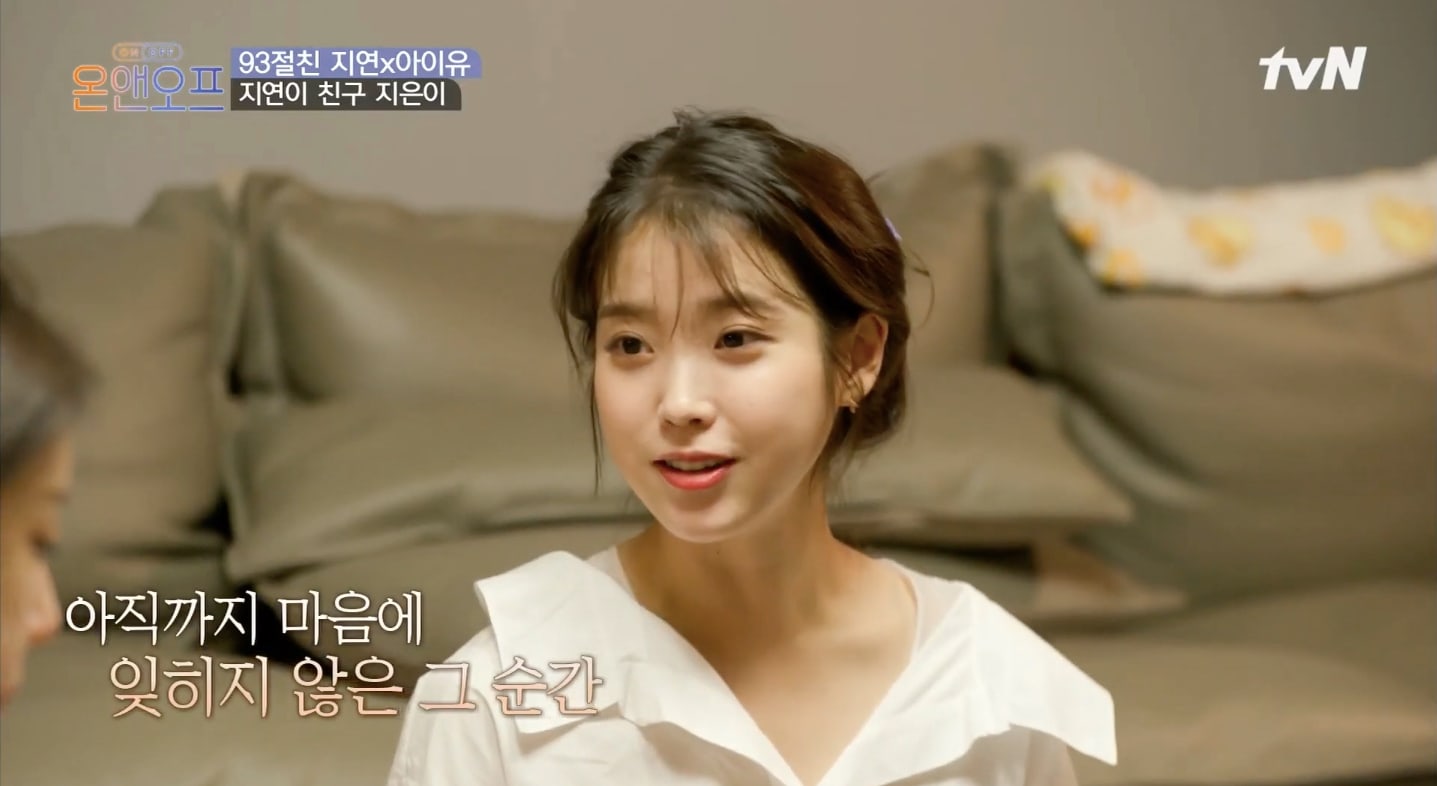 IU
Jiyeon
T-ara
On and Off
How does this article make you feel?