“Search” Director On What Makes The Drama Different, The Cast’s Chemistry, And More

With only a few days left until the premiere of OCN’s “Search,” director Im Dae Woong sat down to discuss some burning questions from excited fans!

“Search” is a mystery thriller about a specialized search party that sets out to uncover the truth behind mysterious disappearances and murders in the demilitarized zone (DMZ). The drama stars Jang Dong Yoon, f(x)’s Krystal, Moon Jung Hee, Yoon Park, and Lee Hyun Wook.

This “dramatic cinema” project is the first drama that Im Dae Woong has directed. He has previously demonstrated unique types of horror through his work in films “House of the Disappeared” and “Horror Stories.”

Regarding his decision to work on “Search,” Im Dae Woong shared, “I wasn’t used to the system of narratives longer than movies and having to film so much. To carefully describe it, I think ‘dramatic cinema’ is a project that acts as a bridge between films and dramas. It was also a big selling point that OCN specializes in unique genres. ‘Trap,’ ‘Hell is Other People, and ‘Team Bulldog: Off-Duty Investigation‘ among others have already laid the foundation for dramatic cinema projects.”

He continued, “‘Search’ has borrowed that factor of being more like a film than films themselves. Additionally, the staff worked delicately in each of their fields to portray the fast storyline of a drama as a movie. That synergy really perfected this project.”

The interviewer asked what he paid most attention to while directing “Search” and Im Dae Woong answered, “Angling it toward the viewers. For example, viewers of horror films are people who enjoy paying money to feel trapped in horror. However, I judged that drama viewers are slightly different. As a result, I paid a lot of attention to directing in a way that could be comfortably enjoyed.”

Im Dae Woong continued, “Additionally, while directing my previous project, I realized it was necessary to help viewers overcome fatigue by helping them relax and feel less nervous. In this instance, it’s how Yoon Dong Jin (played by Jang Dong Yoon) and Son Ye Rim (played by f(x)’s Krystal) are exes and the stories of those living in the village in the DMZ.”

On top of the military thriller genre, “Search” dives into the unknown land of the DMZ where they must face off against an unknown enemy. When asked how he implemented these aspects, the director explained, “It was difficult to have to produce everything. We had to ensure that the topics related to the military were realistic. At the same time, since the DMZ is an unknown space, our imagination had no limits. Our homework was to make sure that the ‘mystery enemy’ wasn’t too extreme or too plain. After thinking over all of these aspects, we picked the best options and hope you will check those out through the broadcast.”

Im Dae Woong also shared his thoughts on the cast’s chemistry, sharing, “First off, you can see the kindness and professionalism of a military dog handler in Jang Dong Yoon, as well as the toughness of an elite search party sergeant.” He continued, “Since Jung Soo Jung [Krystal] is used to moving her body through dance, she adapted to action scenes well. In her acting, she was able to accurately portray the charm and restraint of lieutenant Son.” 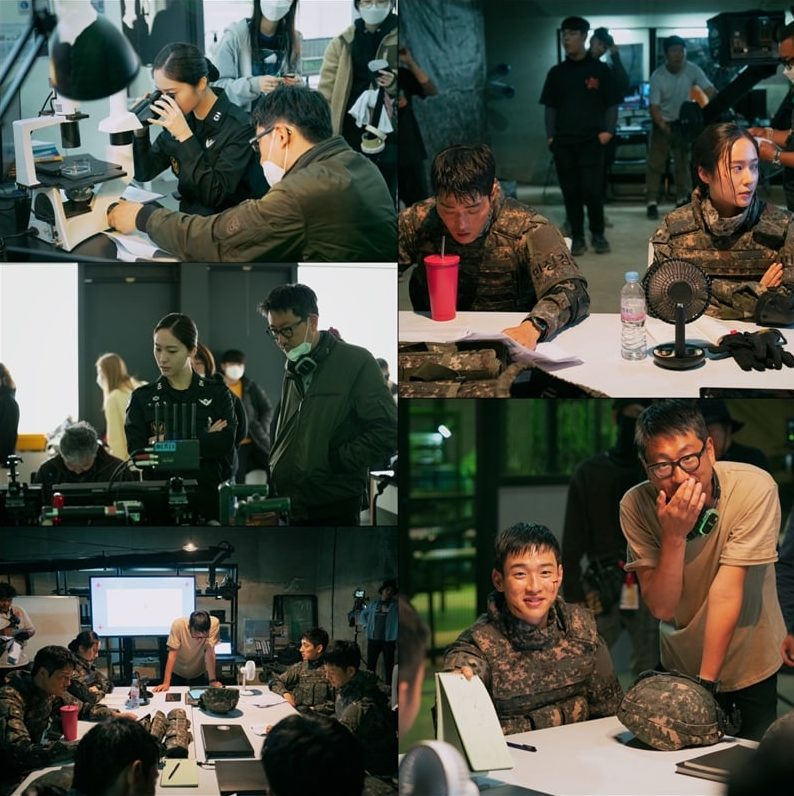 The director added, “Like her character’s name, Moon Jung Hee is sweet, but she is also a special actress who can change the mood in an instant with her charisma. I felt Yoon Park’s strong desire to transform his soft and kind image. Combining that desire with his strong and ambitious character allowed it to come out well. Lastly, I wanted to uncover the hidden aspects behind Lee Hyun Wook’s intense gaze and I believe you’ll be able to see a new kind of acting.”

“‘Search’ is a drama where you can see the rebirth of rising actors through these new and strong characters,” Im Dae Woong continued. “Also, I really believe these actors developed a comradeship while filming together in the middle of summer with over 20 kilograms (approximately 44 pounds) of military gear on. That close chemistry will also be shown in the drama.”

For the message that he wants “Search” to convey and the key points of the drama, Im Dae Woong commented, “Instead of confining ‘Search’ to one genre, it combines various genres as a hybrid. To think of it in terms of food, we regulated the balance in order to be able to taste a wide variety of flavors. It contains entertainment for the general public so that even those who aren’t familiar with the military thriller genre can easily enjoy it. Ultimately, as the director, the message I want is ‘fun.’ Even if I film with great care, I think it’s meaningless if it’s no fun. I hope viewers can enjoyably watch with us as they think about how it differs from typical dramas they’ve watched.”

“Search” premieres on October 17 at 10:30 p.m. KST and will be available with English subtitles on Viki!