On the October 15 broadcast of the radio show “Kim Young Chul’s Power FM,” Kyuhyun talked about how he got Yoo Yeon Seok to star in his music video, his thoughts on variety shows, and more.

Kyuyhun, who recently released his new song “Daystar,” shared the story of how Yoo Yeon Seok agreed to be in his music video.

“I actually thought about it a lot,” Kyuhyun said. “My agency said that they wanted to cast someone who’s good at acting, and they wondered who they should ask.”

Kyuhyun mentioned how he’s known Yoo Yeon Seok from working together in the musical “Werther” and that he sang an OST for Yoo Yeon Suk’s drama “Hospital Playlist.” Kyuhyun said, “While Yoo Yeon Seok was eating, I suddenly asked him if he could be in my music video. After listening to ‘Daystar,’ he told me that he really liked it, and he would ask his agency about it.”

“Yoo Yeon Seok doesn’t usually act in music videos, but he did it this time,” Kyuhyun said, expressing his gratitude. 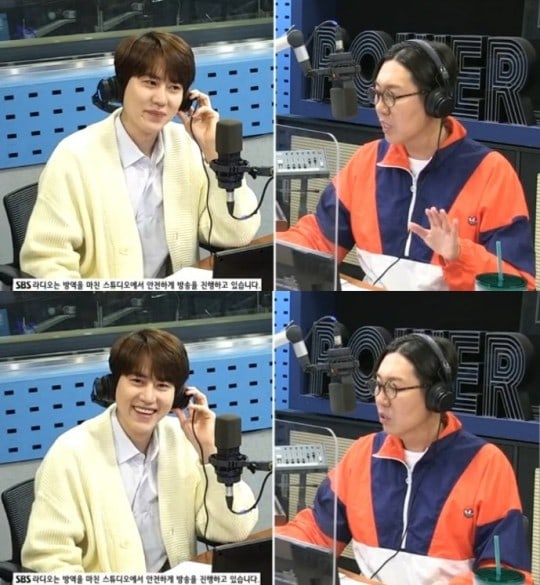 Kyuhyun described “Daystar” as his favorite solo song so far. “It’s No. 98 on the music charts right now, and I wish it would rise at least to the middle of the charts,” he said. “I was wrong to think that I wouldn’t have to promote this song.”

Kyuhyun went on to talk about his appearances in variety shows. He chose his time on “Ask Us Anything” as one of his best moments, bringing up how he had ripped his pants while dancing.

He explained, “I’m always honest when it comes to variety shows. There’s nothing that I plan ahead of time, so I was really surprised when that happened.”

Kyuhyun also named a moment from the eighth season of “New Journey to the West” where he was tickled and forced to keep in his laughter while holding a harmonica in his mouth.

He then shared his thoughts on a nickname he received for cooking. Kyuhyun said, “I cook as if I’m studying. People who are really good at cooking estimate measurements by just looking, but I can’t do that.”

Kyuhyun chose Block B’s P.O as someone who is naturally good at cooking. “Everything P.O makes is good,” Kyuhyun said.

Watch Kyuhyun in “New Journey to the West Season 4” (also known as “Here Comes Trouble”) below!