SEVENTEEN Describes The Message They Hope To Deliver Through New Album, Expresses Love For Their Fans, And More

SEVENTEEN is back with a new album!

On October 19, the group held a global online press conference to celebrate the release of their special album “; [Semicolon].”

The album marks SEVENTEEN’s first comeback in four months after the release of their mini album “Heng:garæ” and title track “Left & Right.” The new album sends an uplifting message to youth everywhere that it’s okay to take a break to stop and smell the roses.

Wonwoo introduced the new album, saying, “If this album can bring comfort and strength to many people, that will be more meaningful than any other achievement or numbers.” Vernon added, “Just like the semicolon that is used to mark a resting place in a sentence, this album will give listeners the chance to breathe.” 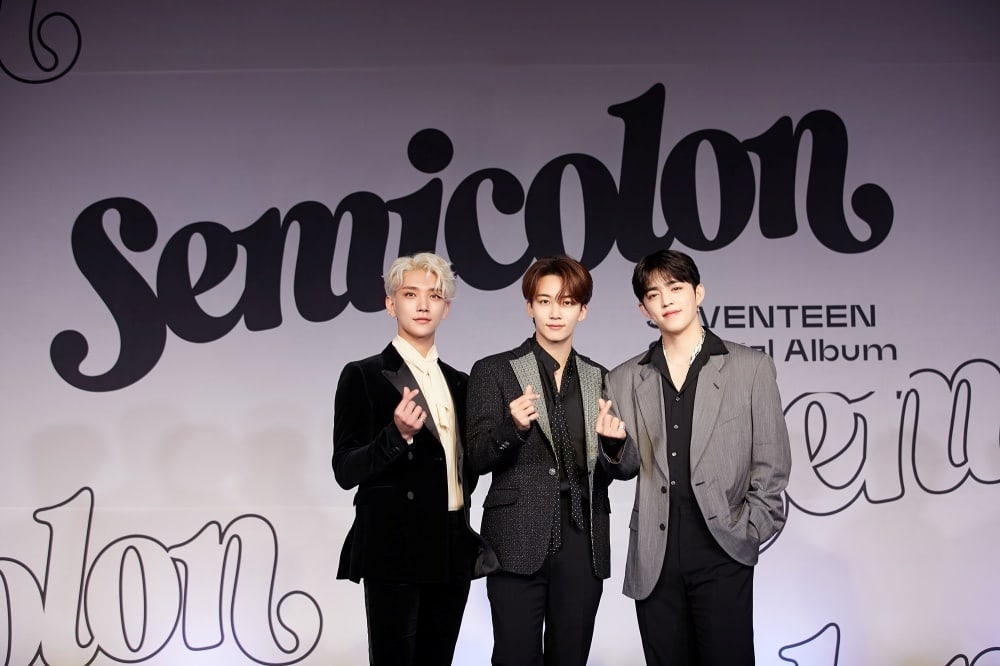 The title track “HOME;RUN” is a swing-based dance track featuring a retro sound that expresses the passion of youth while providing a message of comfort. Woozi commented, “We expressed the feeling of hitting a home run with a rhythmical and hard-hitting sound. You’ll be able to experience SEVENTEEN’s unique sound, and our performance will attract viewers of various generations.” Seungkwan added, “True to SEVENTEEN’s style, we filled the song with plenty of relatable moments.”

The album also includes the song “All My Love,” as well as four different unit tracks: “Do Re Mi,” “Hey Buddy,” “Light a Flame,” and “Ah! Love,” for a total of six tracks. Jun explained the reason behind the inclusion of the unit tracks. He said, “We created some mixed units so that we could show off the endless possibilities of SEVENTEEN. We’ve never shown fans something like this before, so we’re curious about how they will react.”

DK commented on the differences between the new album and the previous album. “The members have all felt a larger burden of responsibility to perform well on stage, so I think our performances have become more mature,” he remarked. “While practicing, I got the feeling that I was watching a musical and that we were preparing for a really fun show. I was happy since it felt like the 13 of us came together as one to prepare for the album.” 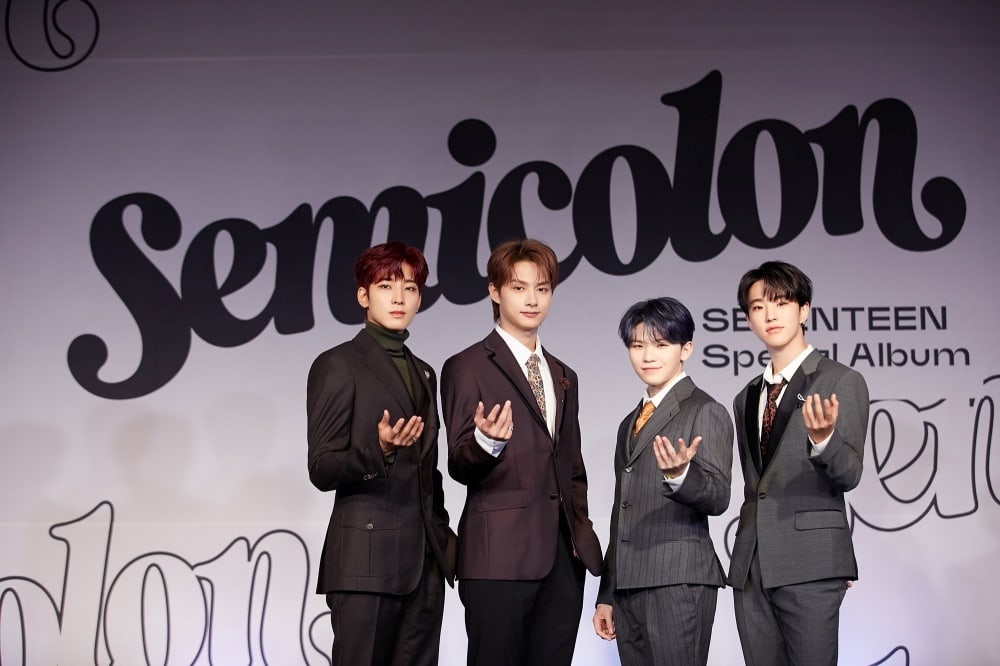 Woozi brought up the theme of youth, which they covered in both their previous and newest album. “Since the members are participating more in our albums, we’re also thinking more and more about how to express our own voices,” he explained. “In ‘Heng:garæ’ we gave listeners a healing experience with our energy, so with this album we tried to help everyone stop to breathe in the midst of their journey toward their dreams. Since the story of youth is also our own story, we built on this theme in a natural way.”

Hoshi then spoke highly of Woozi as he described the production process of the album. “The songs were composed with Woozi at the head, and it really took a long time,” he said. “When I look at Woozi composing everything from the title track, to the remaining tracks, to tracks that haven’t been released yet, I once again think about how impressive he is. Since he works on all of SEVENTEEN’s tracks, I think of him as the group’s engine.”

SEVENTEEN’s previous album “Heng:garæ” earned the group the title of “million seller” after it sold over one million copies in the first week after its release. The album also topped Japan’s Oricon chart for two consecutive weeks, making SEVENTEEN the first foreign male artist to do so since the Backstreet Boys in 2007.

S.Coups reflected on the group’s achievements as he said, “I experience many different feelings when I think about how the love we received from so many fans helped us grow. We poured our gratitude for the fans into this album, so we hope that those feelings will be conveyed. Since it’s thanks to the fans that we’re in this spot today, we’ll repay them with even better promotions.” 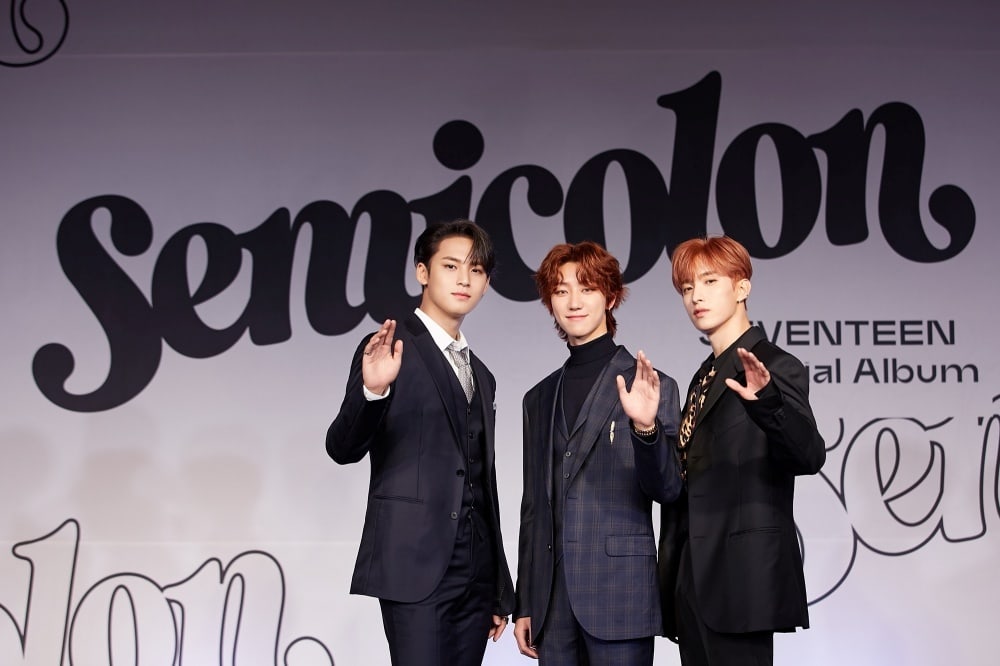 “; [Semicolon]” also broke the group’s previous record for stock pre-orders, surpassing 1.1 million stock pre-orders. Mingyu revealed, “It would be a lie if I said we weren’t anticipating it.” He continued, “Recently, I’ve been thinking about the strength that music can lend people and about how SEVENTEEN’s energy and influence has become larger. I want to spread positive energy through our own influential energy, and I hope that this album will become a precious memory for this generation of youth.”

S.Coups pointed to the energy of all 13 members as the root of the group’s strength. “We’re working on solidifying our group identity while performing and singing about our own stories,” he commented. “Of course there’s been some trial and error, but we’ve taken note of that and made use of the advantage of having so many members. I think one of our strengths is how our own personalities shine through our group choreography. Thanks to that, we can show off 13 different kinds of charm.”

The8 revealed his hopes for the album, sharing, “In the midst of difficult times, I hope above all else that our music will deliver a message of comfort. I hope the semicolon will bring everyone strength, and we will also do our best in our position as well.” He continued, “I want SEVENTEEN to take on the role of a semicolon. I want us to become a stronghold and a place of rest for the youth who have been running endlessly through life.” 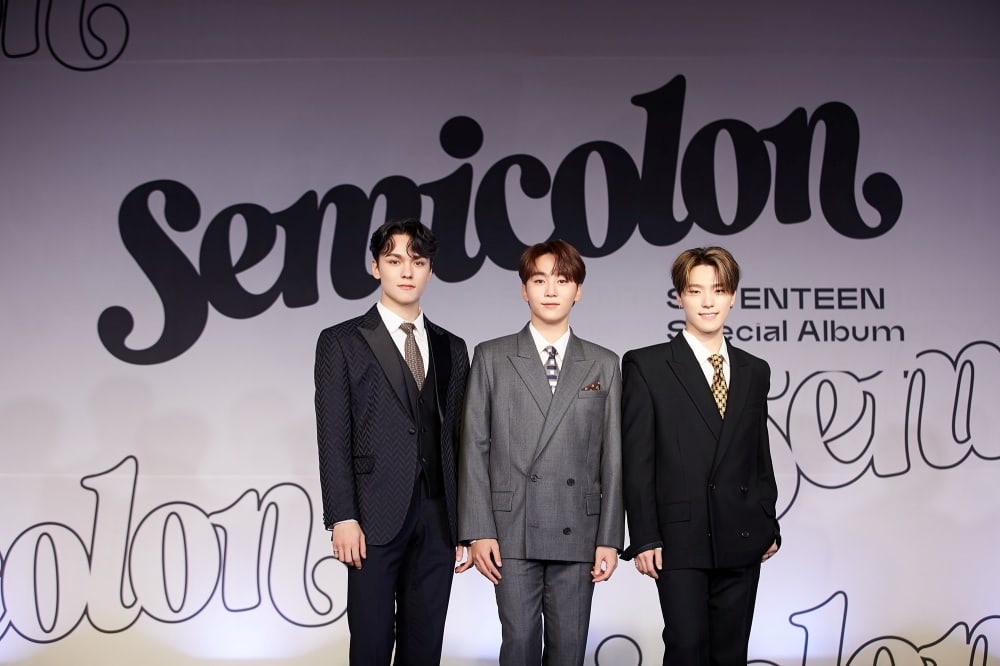 Seungkwan went on to share his idea of success, saying, “Because of that, my idea of success has changed. At first, I gauged our success by our records or the size of our concert venues, but recently my biggest happiness is being able to let our fans listen to good music and returning the love that they have given us. I think success is becoming an artist the fans can be proud of.” Joshua added, “SEVENTEEN’s goal is to make music for a long time.”

Mingyu concluded, “Even after the passage of time, I hope this album’s scent of youth remains strong.”

If you haven’t already, check out the music video for “HOME;RUN” here!