“Alice” Main Cast Chooses Most Memorable Scenes From The Drama

SBS’s “Alice” came to an end on October 24, and the drama’s actors have selected their favorite scenes from the drama!

“Alice” is a sci-fi action thriller drama about a detective named Park Jin Gyeom (Joo Won) who gets involved in the world of time travel when he searches for the truth behind his mother’s murder and encounters a genius physicist named Yoon Tae Yi (Kim Hee Sun) who looks exactly like her.

First, Kim Hee Sun selected her character’s first appearance in episode one as a memorable scene. She explained, “It was my first time filming an action scene, so preparing for it was difficult, but after I watched the episode I felt a sense of satisfaction. I realized that what I saw on screen could be portrayed in a more interesting way depending on the camera angle, the direction, and the editing of the scene, so it was a time where I felt really thankful to the producers.”

Kim Hee Sun also chose another scene from the first episode in which Park Sun Young meets Park Jin Gyeom in the interrogation room after he was wrongly accused of murder. She said that Park Seon Young’s strong sense of trust in her son and her firm resolution to release him from the false accusation brought her closer to the viewers. She added, “It’s also especially memorable since it was my first day filming as Park Sun Young.”

Joo Won then selected Park Sun Young’s death as the most memorable scene. He said, “It was the scene that took the most effort to film. The scene itself was difficult, and it was complicated because we had to move between the present and the past while experiencing the same situation. Because of that, I think everyone was able to come together to concentrate on the filming.” The scene Joo Won selected was a pivotal moment in the drama, as well as one that showcased both Joo Won and Kim Hee Sun’s superb acting skills. 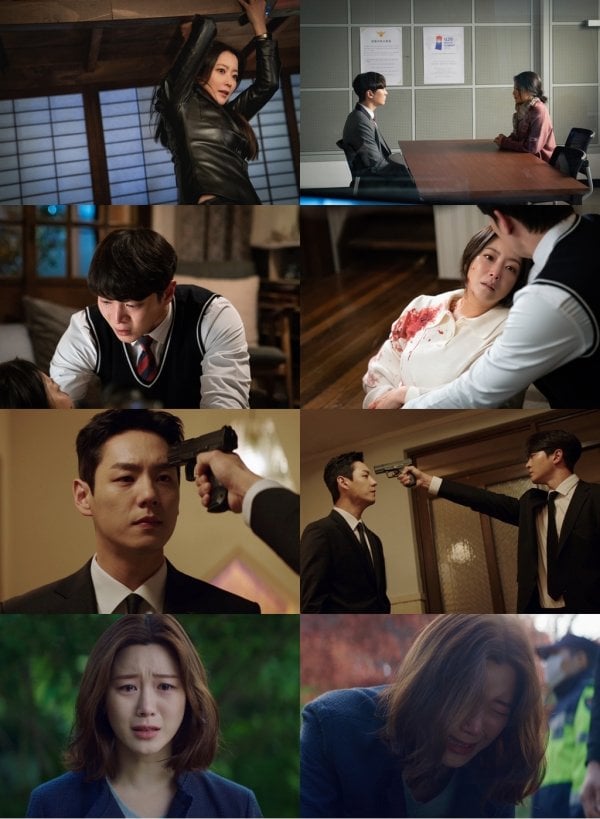 Kwak Si Yang, who played agent Yoo Min Hyuk, chose a scene from episode 10 where his character runs into Park Jin Gyeom at his house. He described the scene, saying, “After he found out that Park Jin Gyeom was his son, he tells him about what his mother was like, but he can’t bring himself to reveal to Park Jin Gyeom that he is his father.” This scene drew viewers in with Joo Won and Kwak Si Yang’s detailed portrayal of the sad fates of their two characters.

Lee Da In, who played Kim Do Yeon, journalist and sole friend of Park Jin Gyeom, chose the death of Go Hyung Suk (Kim Sang Ho) as her most memorable scene. Explaining the reason behind her selection, she said, “I think the part where Go Hyung Suk says, ‘I was happy,’ before he dies is a really memorable scene. It has depth, and the scene also gave all of the cast the rare opportunity to gather together, so I think that’s why it stuck with me.”

Watch “Alice” with English subtitles below: