Watch: TXT Is Amazed And Delighted By Their “Blue Hour” MV In Reaction Video

The group recently made a comeback with the mini album “minisode1 : Blue Hour,” and they sat down to react to their title track MV together in a video released on October 30.

TXT is first a bit confused by the opening music, commenting that it reminds them of the film “Coraline,” and they like the vibe it creates. The members are excited and amazed as their song then kicks in with shots of the guys dancing in front of the merry-go-round, with Hueningkai yelling, “Yeah!” They also laugh and cheer over the shots of them falling through the sky, and Soobin recreates how he frantically flailed in the air.

The cameo by the CGI squirrel makes them exclaim, “It’s so cute!” Hueningkai says in delight, “Look how it’s dressed!” 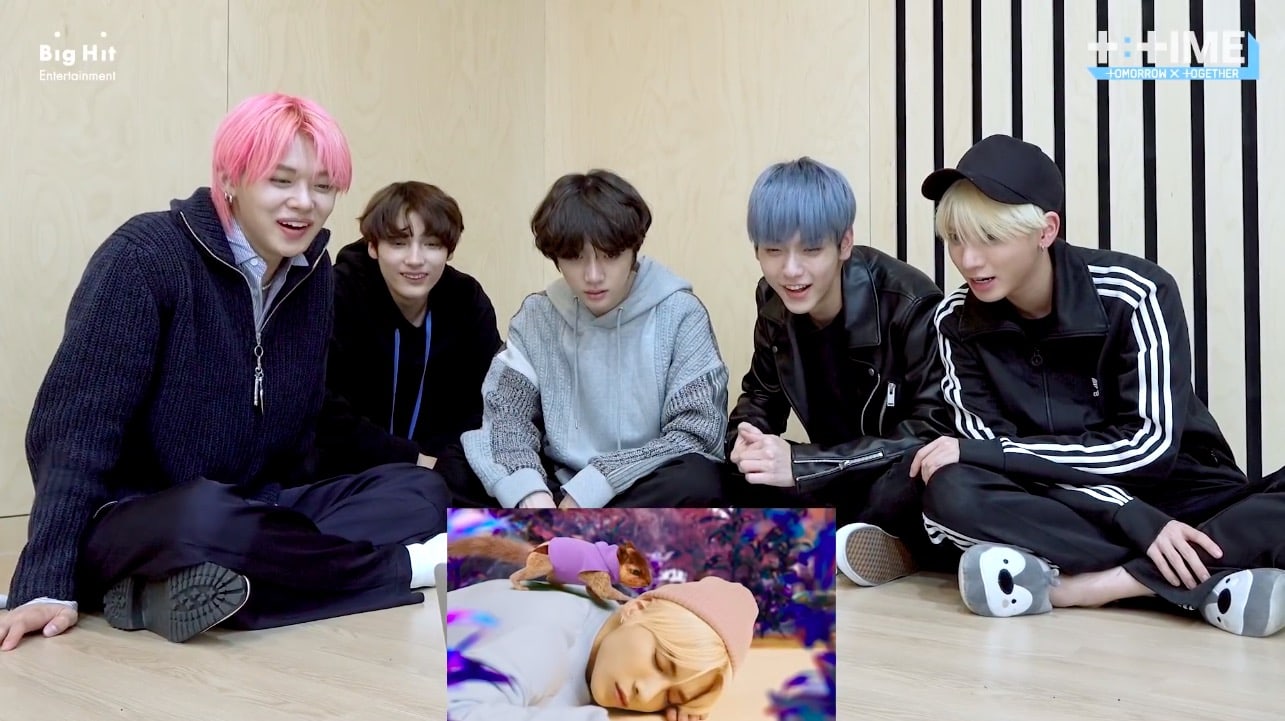 When they come to the scene with the large ladder, Taehyun shares, “That actually was huge.” Yeonjun agrees, “It was actually scary,” and Soobin says he was a bit scared too. “This part looks great though,” adds Yeonjun.

They get to see the scene where Hueningkai sends a water droplet down on Beomgyu below, which was added through CGI, and Yeonjun says, “That’s cute! So cool.” The shot where birds drape Hueningkai’s jacket on him also earned another cheer of amazement from the guys, and they rave about how pretty the clouds look in the sky.

The ending scene includes Beomgyu jumping down from a tree and stepping on a book. “That’s my book…” says Soobin, and Taehyun comments, “He stepped all over it.”

TXT claps when the MV is over, and Soobin says, “Watching this music video makes you feel really happy.” Yeonjun comments that he thinks their fans MOA will love it. They then laugh over a scene of them bumping into each other that they called the “pinball” and also over how Hueningkai had tripped and rolled when they were running.

“It was really fun to film!” say Taehyun. Hueningkai adds, “My favorite part was Soobin falling,” and they laugh and reenact the way he had flailed in the sky. Taehyun also comments, “The whole process was really good too. Before, it was tough work when we were throwing tomatoes. But this time, it was really great.”