Watch: Kim Min Jae Never Fails To Make Park Eun Bin Laugh Behind The Scenes Of “Do You Like Brahms?”

SBS’s “Do You Like Brahms?” revealed yet another behind-the-scenes look at Kim Min Jae and Park Eun Bin!

“Do You Like Brahms?” is a romance drama about classical musicians who are torn between their dreams and the harshness of reality as they pursue their love of music. Kim Min Jae stars as world-renowned pianist Park Joon Young, while Park Eun Bin stars as Chae Song Ah, an aspiring violinist who enters the field later in life than her peers. The drama aired its finale on October 20.

The clip begins with Kim Min Jae and Park Eun Bin at a restaurant. The two actors fill their scene with ad-libs as they discuss the various levels of spice offered for the dish. In between takes, the cameraman asks Kim Min Jae if he actually can’t eat spicy food, but Park Eun Bin responds in his stead, saying that they both can’t handle spicy foods well. During another scene, the director calls “Cut!” and says that they talked too much. Although everyone laughs at the unexpected situation, Kim Min Jae also apologizes to the director.

In the next clip, Kim Min Jae pretends to write on a poster, but Park Eun Bin explains to the camera that the handwriting actually belongs to someone from the artistic team. After filming the scene in which Park Eun Bin’s character approaches him and holds his hand, they both immediately begin their playful antics in front of the camera. They then practice holding hands in a way that would show off their couple rings and fill the set with various types of laughter while continuing to film. Park Eun Bin then calls Kim Min Jae silly, and he makes a silly face in return. 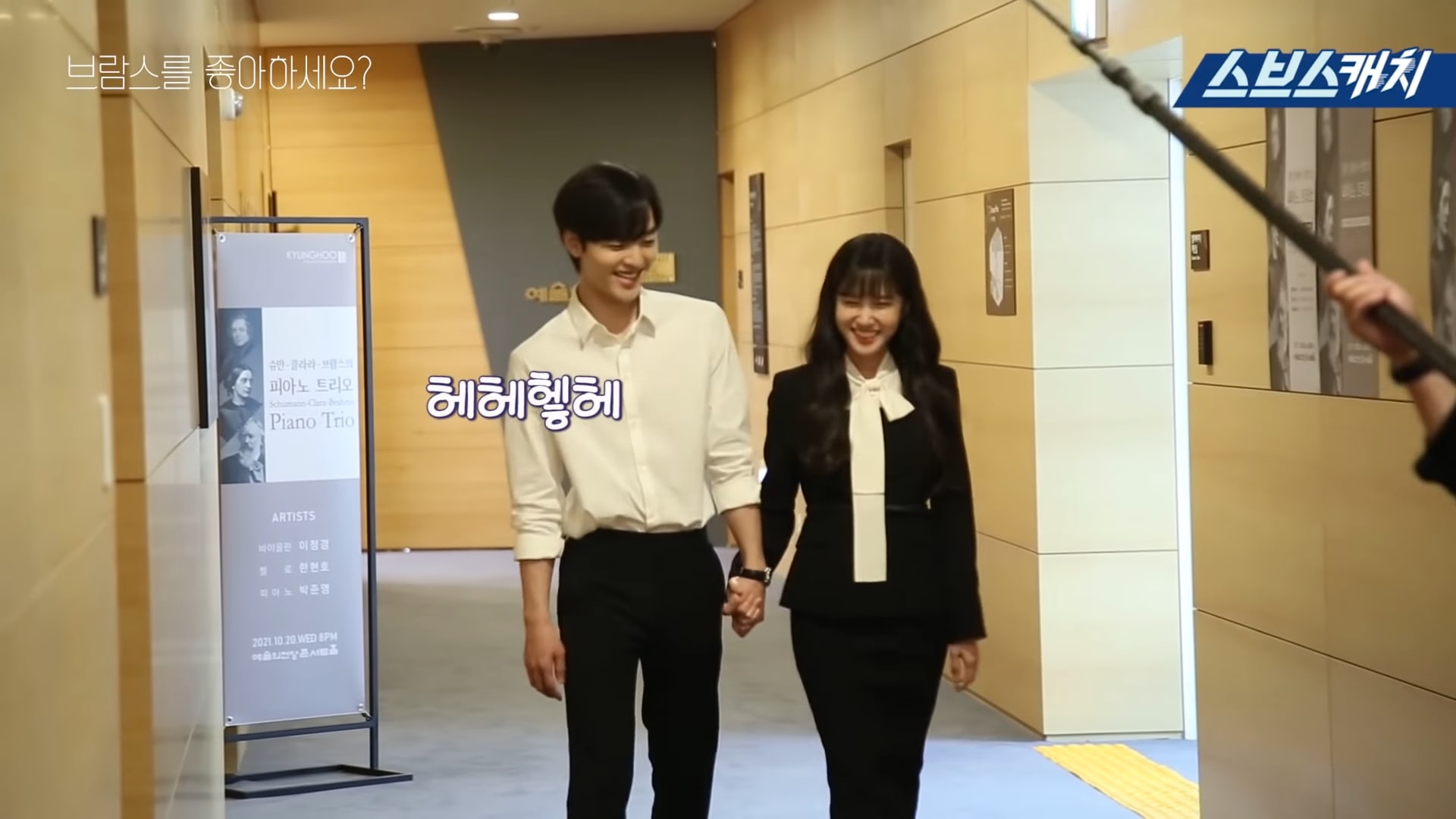 They continue to play around, with Kim Min Jae suddenly turning into Park Eun Bin’s bodyguard after he moves her out of the way to let a cart full of equipment pass by. Park Eun Bin complains that her leg hurts and asks Kim Min Jae to carry her on his back. He bends down right away, but Park Eun Bin laughs and brushes him away.

Next, Park Eun Bin practices making loud steps as she walks across the stage. She calls Kim Min Jae over, saying, “Let’s get some footage for the making-of video.” Kim Min Jae strikes some unusual poses, then Park Eun Bin asks him to moonwalk. They also rehearse their final comments for the last day of filming. Kim Min Jae bows and says “Thank you” to Park Eun Bin before catching himself and turning to thank the camera instead, making her laugh.

Kim Min Jae then turns toward the camera to reveal a secret about Park Eun Bin, saying, “She has a special way of walking when the scene cuts.” He shows how she walks by holding his hands out straight and strutting around in a cute manner. He tells the camera to observe as Park Eun Bin finishes her scene and begins to walk in the exact same way that he had just demonstrated. Kim Min Jae grins as he says, “You saw that, right? Park Joon Young’s powers of observation are at 100 percent.”

The video comes to an end as the actors gather together with the staff to take a photo. Kim Min Jae attempts to make a question mark with his hands, but only Park Eun Bin copies his unique gesture. While saying the drama’s title, everyone makes fists with their hands to take a picture. However, Kim Min Jae realizes this too late and holds out his hand instead, making everyone laugh.