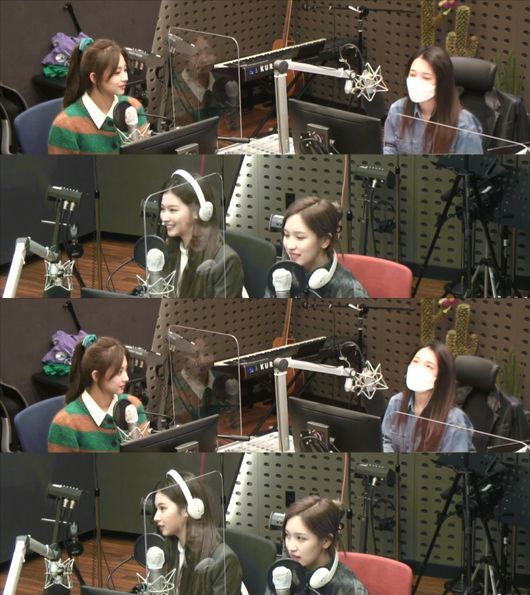 The three members sat down to talk about their latest album, “Eyes Wide Open.” About writing lyrics for the album, Sana said, “When I first heard the song, the intro gave me the feeling of being by the ocean. I decided to write lyrics along that theme, but it didn’t go well. I took a half-bath and got into the right vibe and wrote it.”

She continued, “I want to continue writing lyrics. I want to learn how to compose as well, but I don’t think I can do that by myself. I need someone to help me, but if I get the chance, I’d like to try it.”

The members also looked back on TWICE’s record of hit songs. Tzuyu said, “All of our songs are bright, but ‘Feel Special’ was more emotional. PD Park Jin Young wrote some really good lyrics for that song. It’s a special song that he wrote while thinking of TWICE.” Sana added, “Our other songs were also made with us in mind, but that song is about TWICE’s story. That’s why it’s special.”

About “Dance the Night Away,” Mina said, “It’s winter now, but that was our one true summer song. The members like it a lot.” Tzuyu added, “It’s a fun song with real summer vibes.” Sana also mentioned “MORE & MORE” and said, “It has one of the most intense performances of TWICE’s songs. It was a concept we hadn’t tried before, and the members’ hair colors also made a big impression.”

In discussing the TWICE members’ personalities, Tzuyu was chosen as the most competitive member. Tzuyu said, “There are times when I come off strong, but I think that Nayeon is stronger than me. She works hard at games and she wins a lot.” Mina was chosen as the member with the biggest appetite, and she said, “I like sushi a lot these days. I’m not good at drinking, but I like the vibe.”

Sana was picked as the member who had the hardest time controlling her laughter. She said, “We were recording for a music show. During the opening, Nayeon suddenly burst out laughing even though her microphone was on. I was like, ‘Is this allowed?’ but then I started laughing out loud too.”

Tzuyu was also chosen as the member who rarely got angry. She said, “I’m the type to resolve it on my own and calmly settle my feelings.” Sana added, “Once Tzuyu calms down, she calls her mom and talks to her about it.” Tzuyu agreed, “Sometimes I’ll call my mom about it, and sometimes I’ll talk to the members. I relieve stress by eating good food.”

TWICE recently won a trophy on “Show Champion” for their new title track “I Can’t Stop Me.”

TWICE
Jung Eun Ji's Music Plaza
How does this article make you feel?