Lee Dong Wook gets dressed up to impress in tvN’s “Tale of the Nine-Tailed”!

In episode 11, after turning down Imoogi’s offer to save the lives of his brother Lee Rang (Kim Bum), Nam Ji Ah, and her parents if he handed his own body over, Lee Yeon continued to unravel the mystery surrounding his brother and Nam Ji Ah himself, exuding the charisma and resourcefulness of a guardian spirit. In the end, he smiled in relief as he watched Nam Ji Ah finally reunite with her parents.

Stills show Lee Yeon going shopping for various outfits together with writer Kim Se Rom (Jung Yi Seo) and assistant director Pyo Jae Hwan (Kim Kang Min), striking model-like poses as he tries on different suits. He first struts out in a flashy red suit, pleased with his fashion choice. However, Kim Se Rom’s and Pyo Jae Hwan’s faces of disapproval obviously prove that their opinions differ. Lee Yeon also tries on a more formal suit and tie with a dissatisfied expression, but his mood improves after the enthusiastic reactions from his companions. 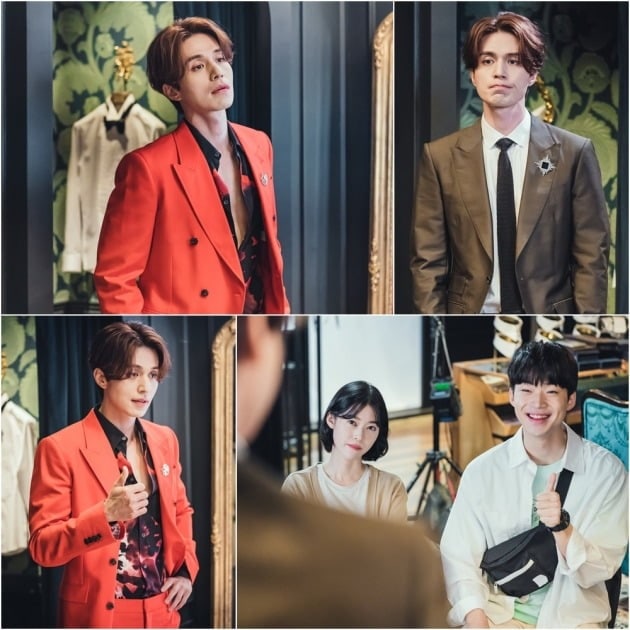 When filming the scene, all three actors were said to have filled the set with endless laughter, which was amplified when Lee Dong Wook utilized his unique sense of humor to include some ad-libs. He also earned plenty of cheers from his fellow actors for his ability to effortlessly pull off the fashionable outfits and took the time to take photos to remember the enjoyable scene.

The drama’s production team commented, “It’s hard to imagine Lee Yeon without Lee Dong Wook. ‘Tale of the Nine-Tailed’ stands out due to his perfect portrayal of Lee Yeon. Keep an eye out for how Lee Yeon and Nam Ji Ah will win over her parents with their relationship that has grown even more firm in the face of hardship.”