BTS’ Suga surprised the group and fans in their comeback V Live broadcast!

After BTS dropped their album “BE” on November 20, they spoke with fans through a live broadcast. Suga was not able to join in on set as he’s recovering from having surgery on his shoulder earlier this month.

During the show, the rapper connected with the guys via a surprise phone call and said, “I’m recovering now.” He shared that he’s not able to use his left arm yet at this stage of the recovery process, but he said he could play rock paper scissors when Jin asked. J-Hope said, “It feels empty without you.”

Suga went on to share, “I think I’ll start rehabilitation next week.” He said, “Everyone, please enjoy our album ‘BE,’ and I think you’ll really enjoy it because we were very involved in making it. I’ve still got it on repeat too.”

Jungkook asked him to sing “Telepathy,” and Suga said “The key’s really high so I had a hard time during recording!” Still, he sang a bit and the guys happily laughed and clapped. 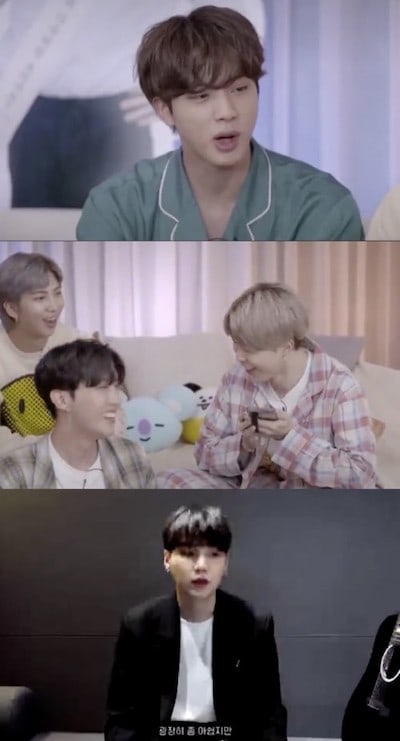 Suga also said in a pre-recorded interview video, “It’s sad that I’m not able to take part in the promotions for the album ‘BE,’ but it would be good if you think of it as me resting for a bit so that I can return improved.”

He shared that the other members had often said things like “How can we do our scheduled activities without Suga?” and added, “However, they seem to be doing really well so I’m relieved. I’m not gone forever, so don’t be too sad. I’ll return soon.”