Rapper Swings clarified that he was not offended by BIGBANG’s T.O.P uploading a photo of him with doodles on it, after the image belatedly became a subject of controversy.

Last December, T.O.P had uploaded a cropped photo of Swings with doodles on his face to his Instagram stories without any further explanation. Recently, the photo resurfaced and some people criticized T.O.P for what they called disrespectful behavior.

On November 22, Swings responded in his own Instagram stories, first commenting that it had been about a year since T.O.P had posted it. Swings then wrote the following:

I wasn’t really upset about it at the time either, and personally I like T.O.P, since I find him endearing. I’m worried that people might see him in a bad light as this becomes a hot topic again. To be honest, I just felt great when T.O.P uploaded it because I’d made it to T.O.P’s Instagram, so I felt like I was awesome. Don’t criticize T.O.P about it. I was a meme king, particularly back then. LET THE BOY HAVE SOME FUN. 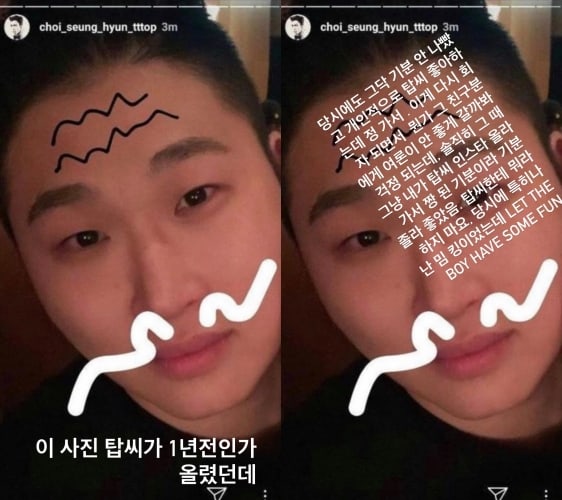 BIGBANG
T.O.P
Swings
How does this article make you feel?