Watch: NU’EST’s Minhyun And Jung Da Bin Show Their Playfulness Behind The Scenes Of “Live On”

The video opens with Minhyun rehearsing a scene in which he angrily cleans up the broadcasting club’s meeting room. After he sweeps the floor, he jokes, “I like cleaning. I’m the god of cleaning.”

Next, Yang Hye Ji discusses the details of her scene with the director and mimes her actions to Minhyun who is waiting on the other side of the window. Jung Da Bin comes in to practice grabbing the microphone, and the director tells her, “It’s okay, as long as you don’t break it.” However, when it’s time to film the scene, she grabs the microphone so forcefully that it snaps off the stand. Jung Da Bin freezes in a moment of confusion, but Yang Hye Ji helps her put the microphone back in its place and filming continues smoothly. 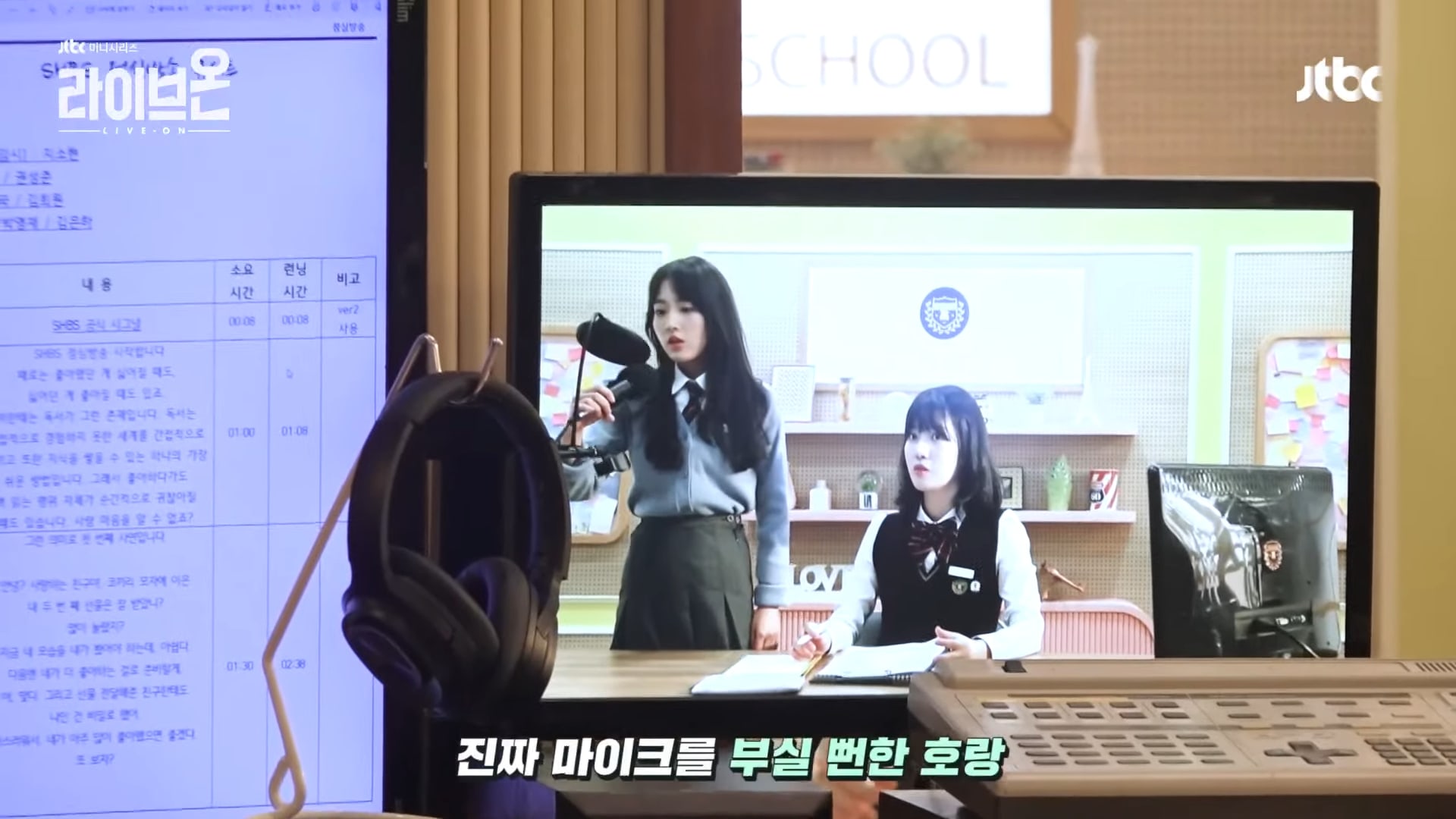 Yang Hye Ji and Jung Da Bin enthusiastically talk about the scene they just filmed, describing how Baek Ho Rang storms into the room to take over the broadcast from Yang Hye Ji’s character Ji So Hyun. Minhyun then explains the feelings of his character Go Eun Taek and how he isn’t able to scold Baek Ho Rang because she’s so cute. He goes on to say that even if she broke the microphone, he would be understanding and just buy a new one.

Moving outdoors, VICTON’s Byungchan films a scene in which he hurriedly takes bags of snacks that Jung Da Bin left behind. After the director says, “Cut,” everyone bursts into laughter at his comedic actions.

During a break, Byungchan tells Minhyun, “You look like a celebrity.” After pausing for a second, he continues, “Oh wait, you are a celebrity,” and they both share a laugh.

The director then comes to ask for Minhyun’s opinion on what kind of drink his character should carry, and they decide on a drink that’s somewhat unusual. Minhyun shows off the can to Jung Da Bin, asking her if she has tried it before. From the side, Byungchan chimes in, “It’s not that good,” and Jung Da Bin describes the taste, saying, “It’s kind of cool and minty.”

Finally, Jung Da Bin and Minhyun work through the timing of their scene, and Minhyun holds his drink up to the camera as he explains, “Eun Taek likes it, and because I’m Eun Taek, I like it. I don’t drink anything but this. It’s my favorite drink.”