“Live On” has released new stills teasing the budding romances in the drama!

JTBC’s “Live On” is a romance drama focused on the broadcasting club of Seo Yeon High School. Jung Da Bin plays Baek Ho Rang, a social media influencer and school celebrity who enters the club with suspicious motives, while NU’EST’s Minhyun plays Go Eun Taek, the strict perfectionist who is the head of the club.

In the first photos, Go Eun Taek and Baek Ho Rang are working hard in preparations for their festival at school. Go Eun Taek has also been working to help Baek Ho Rang officially join the broadcasting team.

Although she originally joined the club to uncover the identity of her anonymous attacker, Baek Ho Rang is slowly beginning to enjoy broadcasting and developing friendships with her team. The photos show how diligently the broadcasting team is preparing for their event and tease the excitement and nerves between Baek Ho Rang and Go Eun Taek. 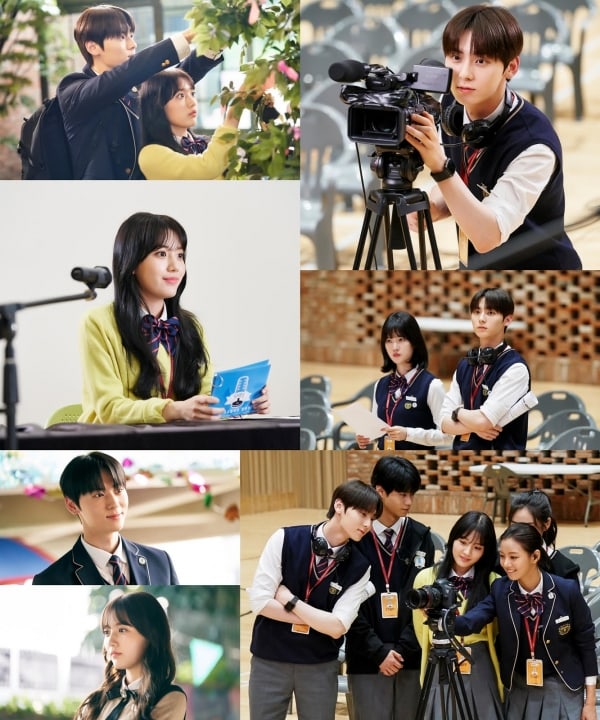 The producers commented, “We hope you pay close attention to the story of Go Eun Taek and Baek Ho Rang as they suddenly grow closer while preparing for the Seo Yeon High School festival. This festival will become a turning point for both their romance and for the search of the anonymous attacker so please look forward to it.”

The next set of stills previews the adorable romance between VICTON’s Byungchan and Yang Hye Ji. Yang Hye Ji plays Ji So Hyun, a model student and the broadcasting club’s vice president. She is consistently bombarded with love from Kim Yoo Shin (Byungchan), who consistently lets her know how he feels by bringing her chocolate and a beverage every day.

Kim Yoo Shin is completely head over heels for Ji So Hyun, visiting the library just to see her and eating lunch twice just to eat with her. The stills show an unexpected interaction between the pair at the school festival as Kim Yoo Shin is taken aback by an unfamiliar side of Ji So Hyun. Viewers will also be able to see a different side of Kim Yoo Shin as he becomes more cold and serious.

Despite the surprises between the two, they still appear smitten with one another as Kim Yoo Shin adorably puts a bright smile on Ji So Hyun’s face with his surprise event.

Start watching “Live On” below!