Jo Bo Ah Talks About Acting With Lee Dong Wook, Names Her Most Memorable Scene In “Tale Of The Nine-Tailed,” And More

Jo Bo Ah shared her thoughts about her hit drama “Tale of the Nine-Tailed” through an interview!

Jo Bo Ah spoke about how she felt when filming ended for the show. “I think I mostly felt sad,” she shared. “I lived as Ji Ah and Ah Eum for over seven months, which was my longest time yet. And as it was a mix of genres including fantasy, action, thriller, and romance, I think I was more focused while filming. For that reason, it seems this will be a drama that remains in my heart for a long time. I hope that viewers will remember Nam Ji Ah for a long time too.”

Jo Bo Ah went on to share that she’d been afraid about taking on an action drama for the first time. “However, I prepared in advance while going to action school and I found it really thrilling to create each of the scenes while coordinating with the martial arts director and co-stars on set,” she said, adding that performing the action scenes had felt new and fun.

“Also, the finished scenes were edited to look even more realistic than I’d imagined, so I felt proud,” she said. “It made me want to take on the challenge again if there’s a role in an action project that I could pull off.”

Jo Bo Ah was also asked about working with Lee Dong Wook on the show. “Lee Dong Wook is the type of person who’s a good leader,” she replied. “From the start of our drama to the end, I relied on him a lot, received a lot of help, and learned while filming. He led the way and I tried to do a good job at following, and I think our unique chemistry was portrayed well because of that. I’m so grateful that the viewers enjoyed it.”

Fans also loved the self-directed teasers that the two stars made and uploaded to their Instagram accounts. When asked what had inspired that, Jo Bo Ah said, “Since we’d spent a long time preparing the drama, we both felt a lot of love for it. So the two of us shared a desire to introduce and promote the drama we’d worked so hard on to more people.”

Jo Bo Ah also spoke about her most memorable moment from filming. “As the scene that I cherish and love the most, I think I would want to choose the scene that portrayed the sad story of Ah Eum and Lee Yeon,” she said. “I really cried so much as soon as I got the script, and in comparison, on set I worked hard to keep myself from crying because Ah Eum had to die and leave Lee Yeon behind. We filmed over three days in a quiet forest with an intense level of focus, and so I had no regrets. It’s the most memorable scene for me.”

Jo Bo Ah was then asked to describe the story that she imagines takes place after the final episode. “At the end, like an epilogue, Lee Yeon meets Sam Jae and his eyes change,” she said. “If there’s a bit of the mountain spirit’s power left in Lee Yeon, then I think that with his small superpowers he could join together with Ji Ah, who totally belongs to the world of humans, to be a couple that helps weak people and those in need, like the Avengers. I think that would be fun.”

Finally, the actress shared a message for fans who have loved the drama. “I sincerely thank everyone who watched ‘Tale of the Nine-Tailed,'” she said. “All projects are precious to me but I think I will think of this drama a lot.” She shared that it had been one of her goals to show another side of herself as an actress, and she’s grateful as she feels that she was able to do so even in part.

“I hope that even to a small degree you were able to get through this difficult and tiring time by feeling healed through our drama,” she shared. “Thank you.” 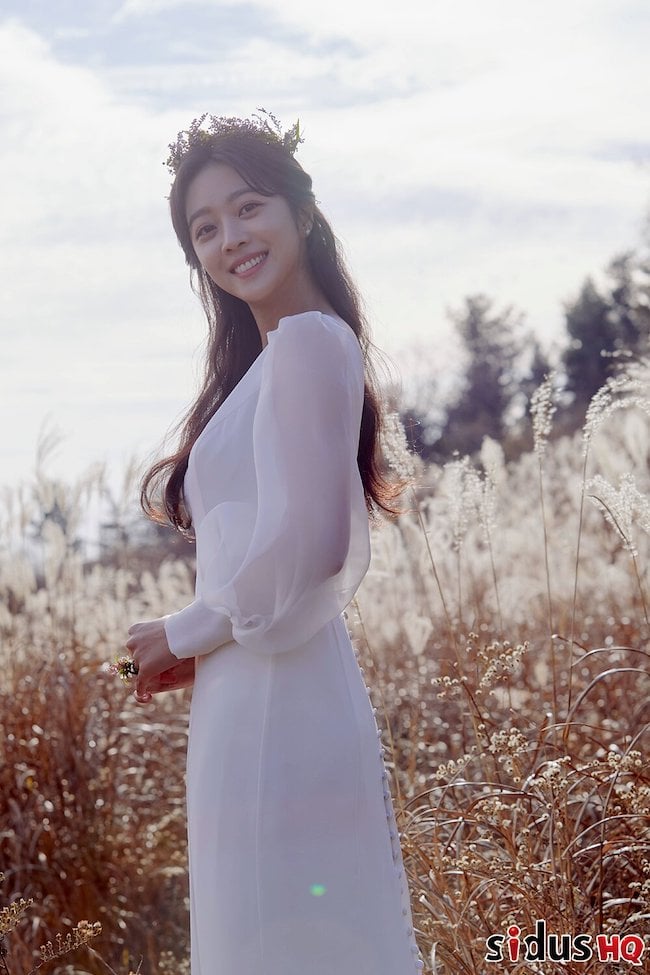 Jo Bo Ah’s agency SidusHQ also shared a video of her last filming for the show, when she dressed as a beautiful bride for the wedding scene. As she leaves the location, Jo Bo Ah says in reflection, “It’s over. It’s ended.” She then takes photos with Lee Dong Wook as they both hold bouquets of flowers to celebrate the final filming.

“I devoted 2020 to filming ‘Tale of the Nine-Tailed,'” says Jo Bo Ah to the camera. “We filmed for such a long time, and so it feels different and very bittersweet. Please look forward to my work in the future! Thank you!” Finally, she is surprised by staff members, who decorated her van to celebrate her last filming and brought her a cake.

Jo Bo Ah
Tale of the Nine-Tailed
How does this article make you feel?