On the latest episode of “Ask Us Anything,” Super Junior’s Donghae shared the story of a time he got into a physical fight with Kim Heechul.

During Super Junior’s guest appearance on the December 12 broadcast of the JTBC variety show, the idols talked about some of the most memorable moments of their 15-year career.

When Kang Ho Dong asked Donghae to name the moment that stood out the most in his memory, Donghae remarked with a smile, “The moment I remember most is when Heechul and I got into a fist fight.” When the cast members asked if they had actually hit one another, he replied, “Heechul was the one who hit me first.”

Yesung then made everyone crack up—including Heechul—by teasingly interjecting, “What I heard from Donghae back then was that Heechul scratched him by clawing at him [like a cat], instead of hitting him.”

Donghae went on to explain what had actually happened, recalling, “In the past, Heechul’s original dream was to become an actor, and this was during that period of time. Back then, he constantly expressed his feelings [of wanting to leave the group] by saying, ‘I would feel apologetic if I continued to be a member of Super Junior, and I don’t think I can continue with the group while feeling this way.'”

“This was around our fourth album,” said Donghae, “and it was such an important time for us, so I asked him, ‘Can’t you stay together with us?’ But he said, ‘I’m not going to [be in Super Junior] anymore, so don’t look for me again,’ and so on, and then he went out.”

Heechul chimed in, “I left the house,” and Donghae continued, “When he left, I told him, ‘If you walk out that door, don’t think of ever coming back. The moment you leave, I won’t think of you as our hyung [older brother or friend] anymore. I won’t even call you hyung. I’m going to call you Kim Heechul instead.’ But he still left. I was so angry.” 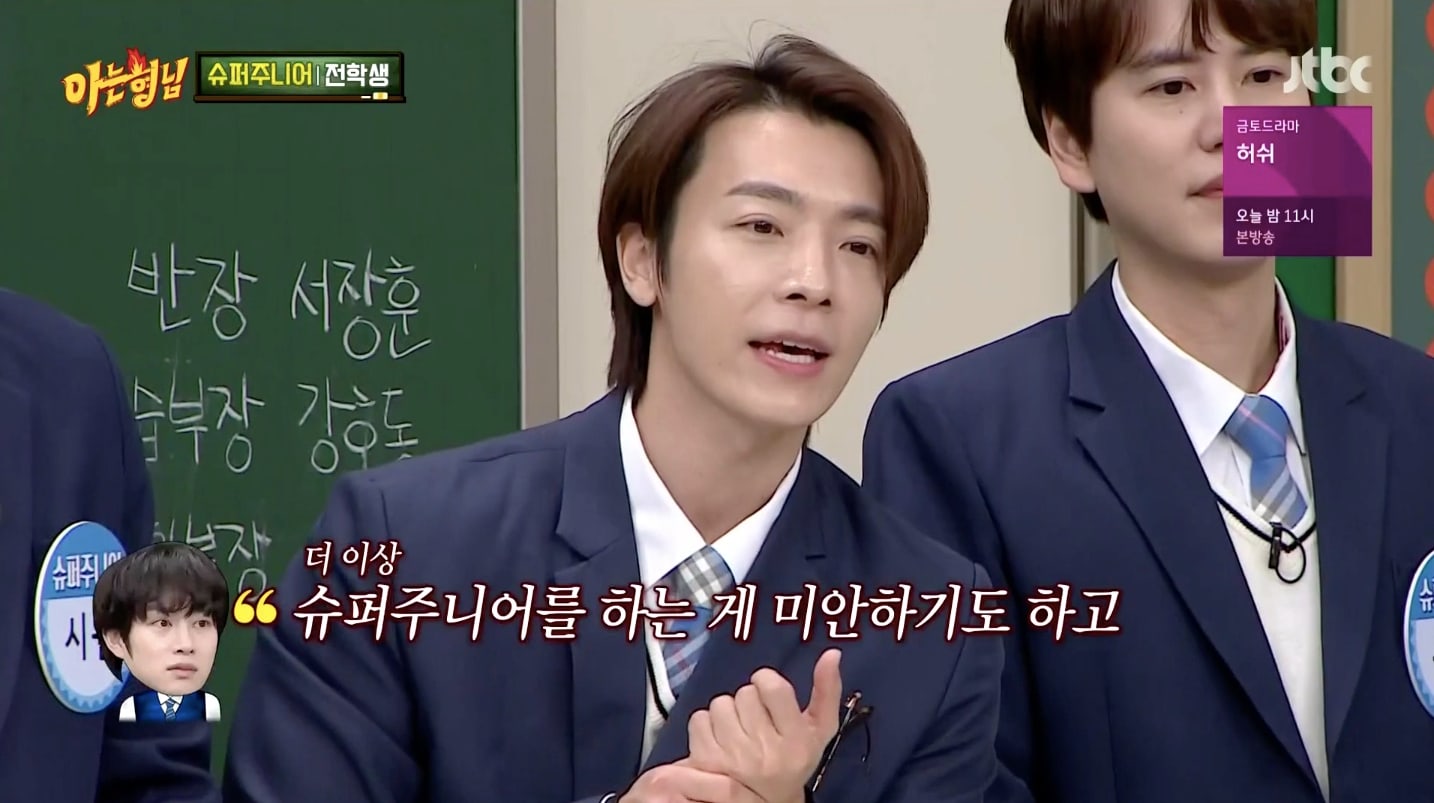 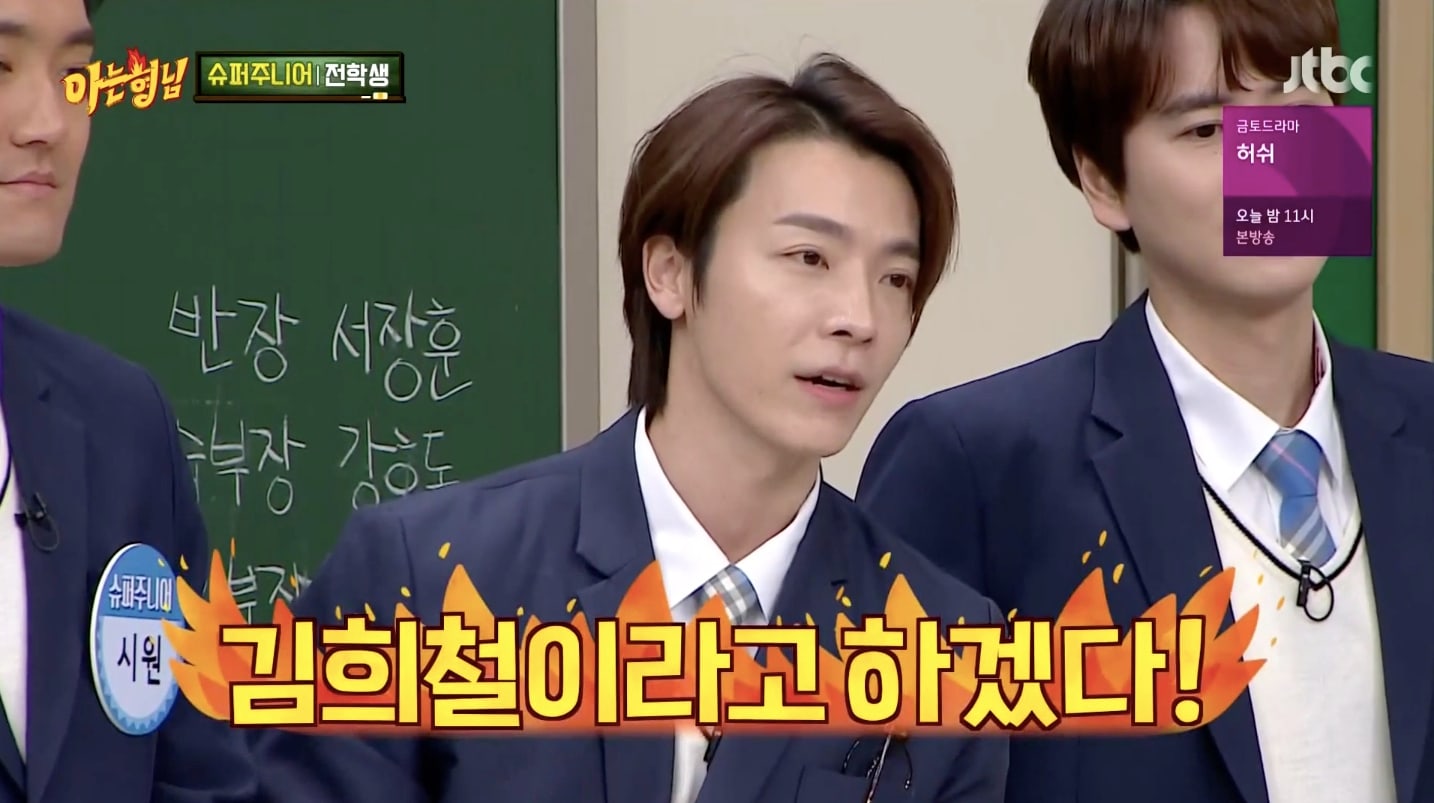 “Then Heechul came back,” Donghae went on, “and we ended up fighting. Heechul hit me first, but I felt like I couldn’t hit a hyung [someone who was older than me] back. So I kicked him in the shoulder instead. Heechul then grabbed me by the neck, and that’s how I got scratched.” 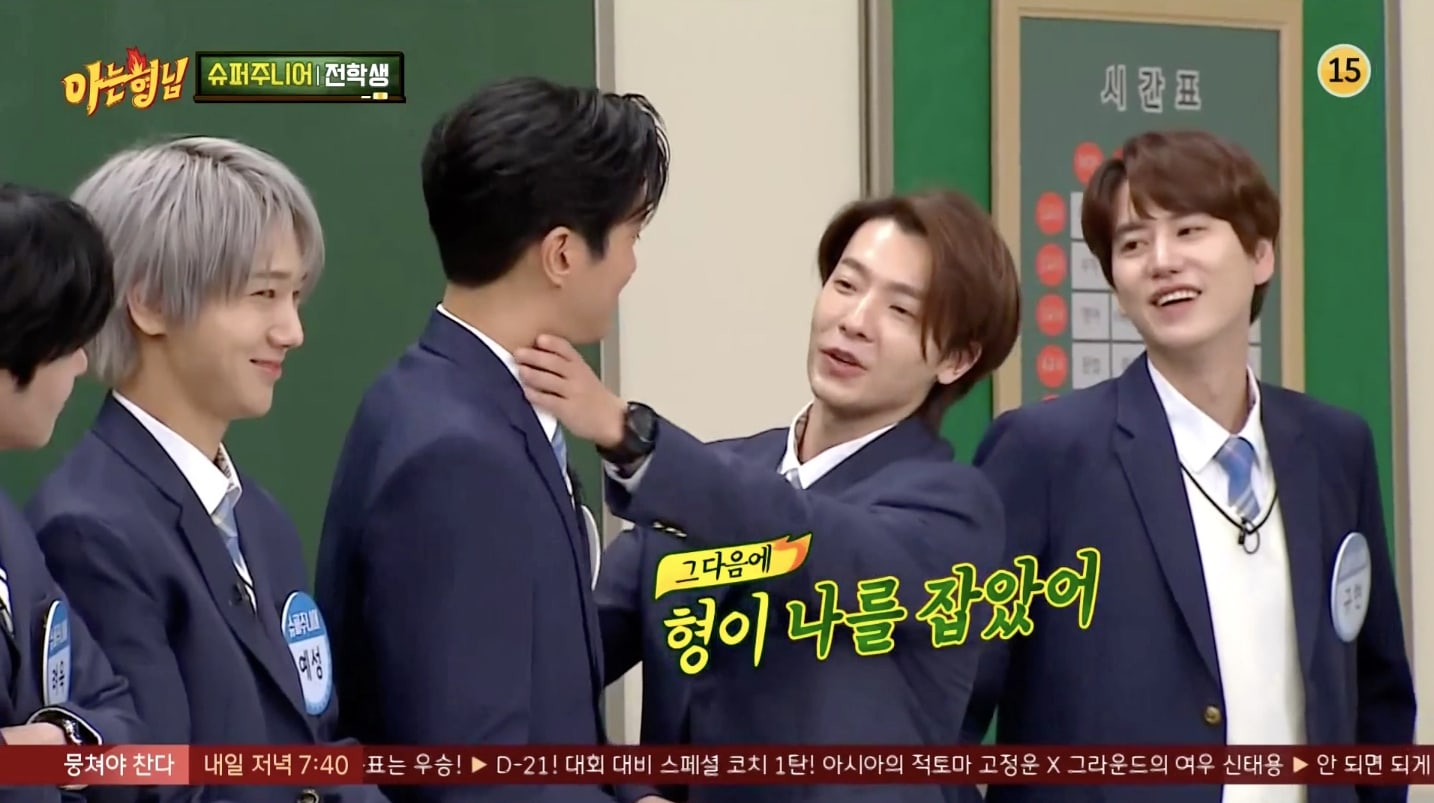 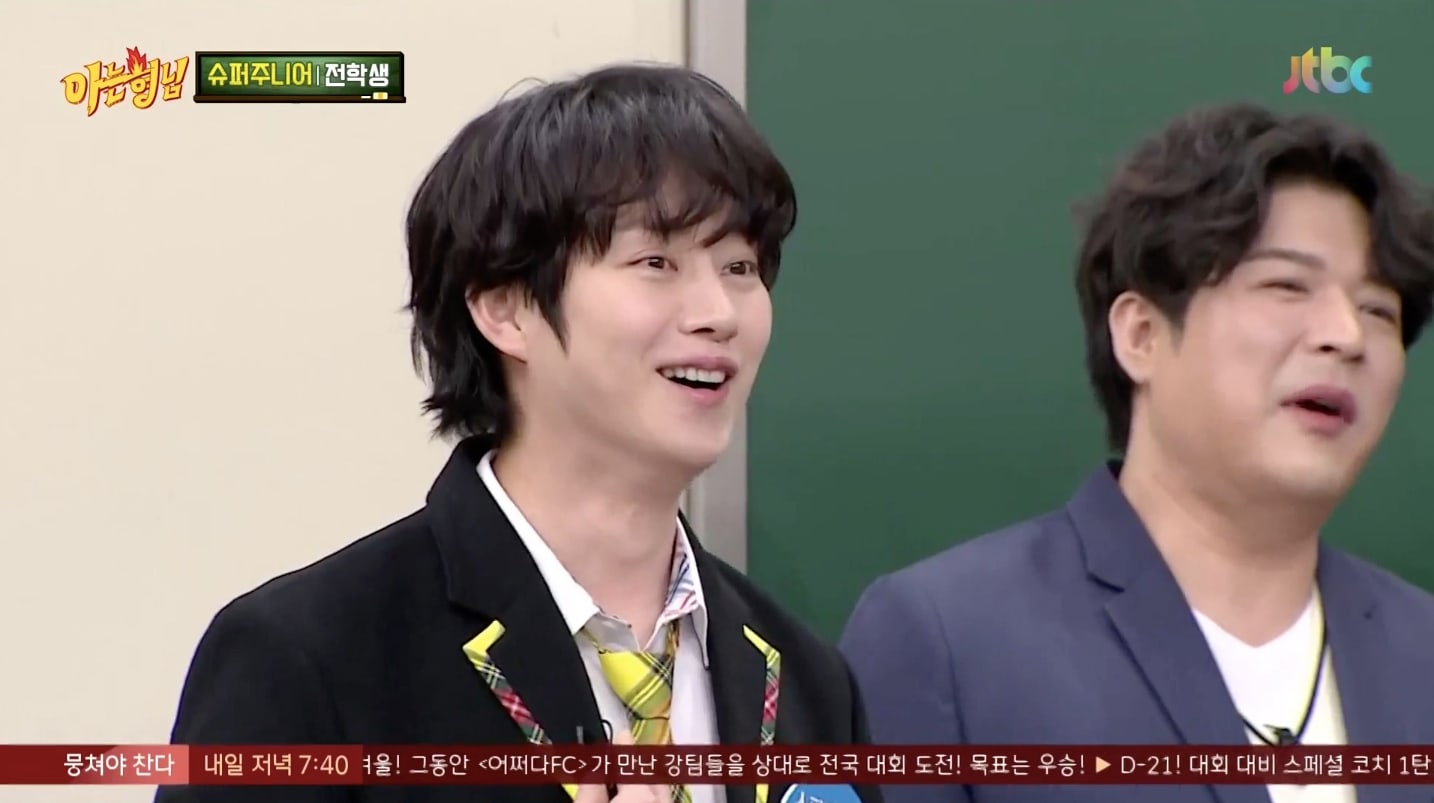 “So the two of us took a photo together right away,” continued Heechul. “I bet we still have that photo somewhere.”

When the cast responded with confusion over why they had suddenly taken a photo immediately after fighting, Donghae explained, “Heechul went into his room, and I went into my own room as well. But less than three minutes later, I went to see him.” Heechul agreed, “He came right back out,” and Donghae continued, “I told him, ‘Hyung, I’m sorry,’ and then I said, ‘Let’s take a photo together.'”

After the “Ask Us Anything” members burst out laughing at Donghae and Heechul’s unusual way of commemorating their reconciliation, Lee Soo Geun asked, “But Heechul, why did you go back [to the dorm] after leaving?” Heechul then made everyone crack up a second time by responding, “It was really cold out.”

Heechul went on to express his gratitude for Donghae’s commitment to keeping the group together, commenting, “Every time I said I was going to leave the group, I would fight with Donghae. That happened over and over, and that’s how I ended up making it all the way here today.” Shindong chimed in, “You can’t talk about loyalty without talking about Donghae.” 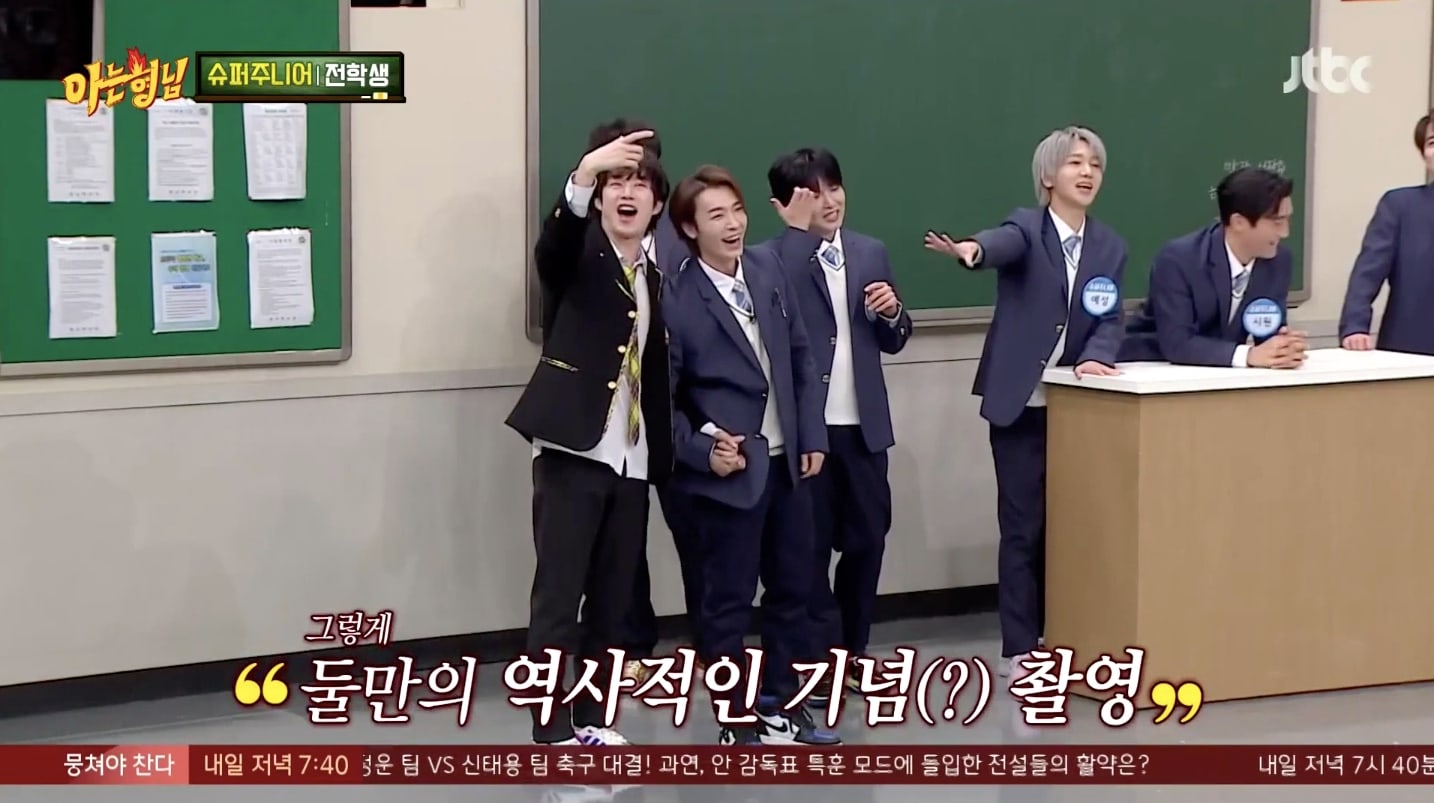 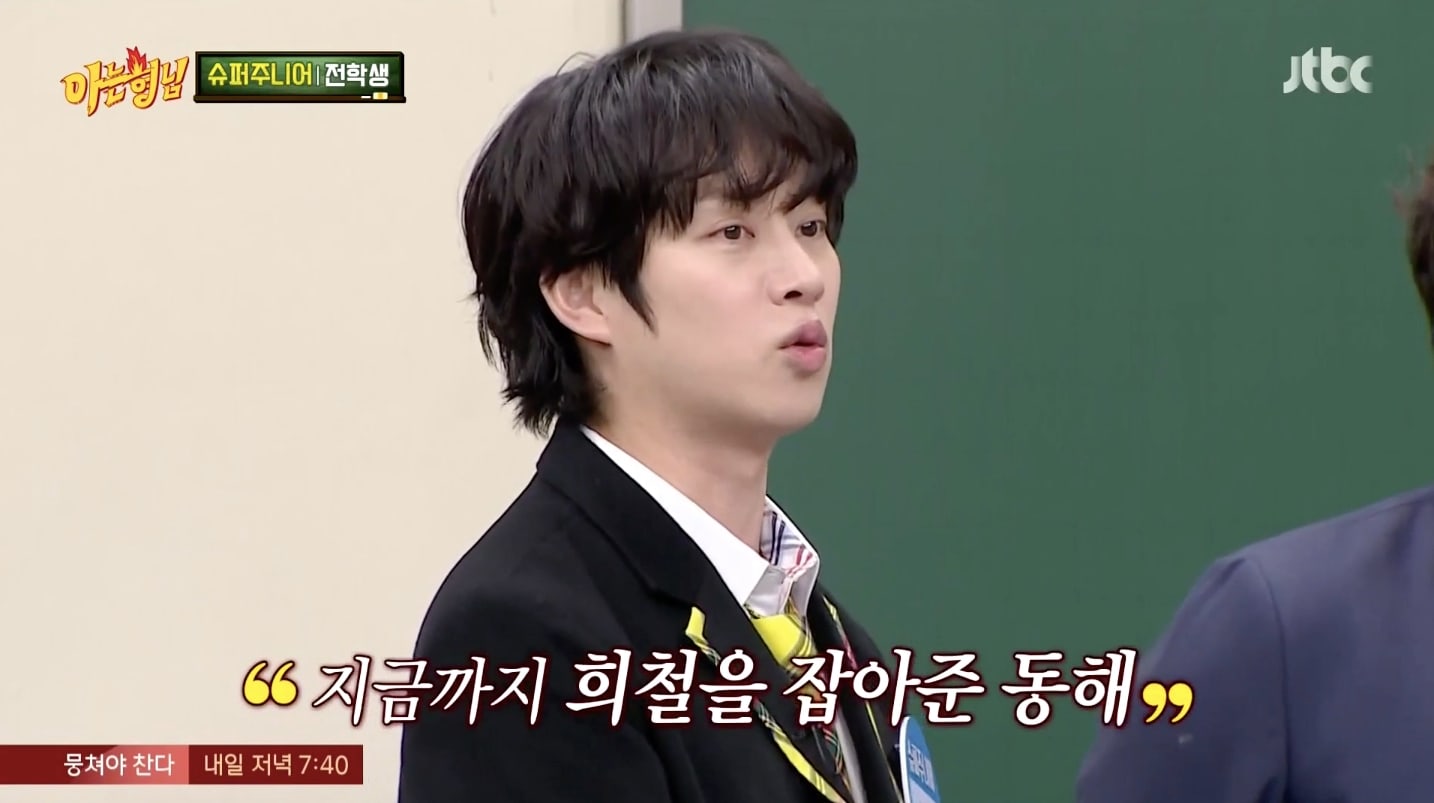 Super Junior
Ask Us Anything
Donghae
Kim Heechul
How does this article make you feel?